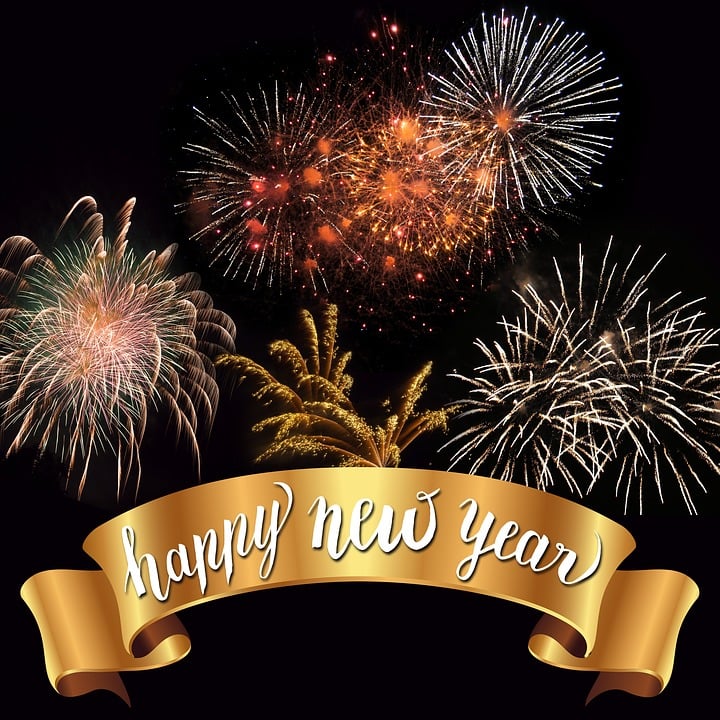 The DCC is like an ATM dispensing tournament prize money :-)

First, the good news is the DCC will be staying at our current location. Thanks to Pastor Sheri Admiraal negotiating with the church admin team on our behalf, a much more reasonable rent agreement has been signed by returning DCC President, Brian Wall. Attendance at the DCC over the course of the past year has been fantastic. We averaged over 100 players registering for our Tuesday night monthly tournaments. With an average of 70 - 80 players playing each week. One week we had 92 players playing a round of USCF rated chess on a Tuesday night at the DCC. Will we see over 100 players on a Tuesday night in 2023? I would certainly toot the DCC horn about that :-) 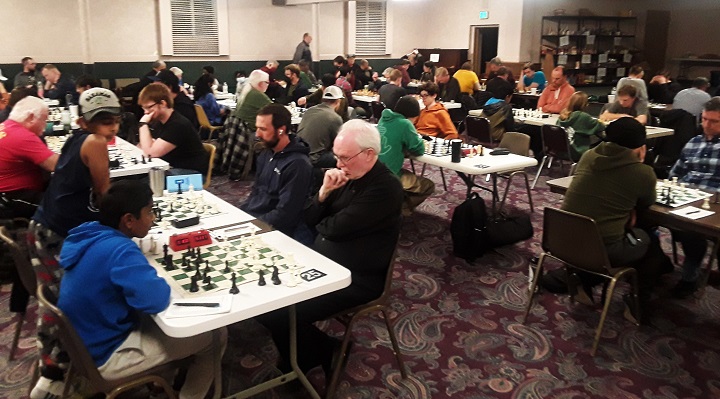 I'm real glad we will be able to stay at the church.  It is the best room the DCC has ever had, without question.

The 2022 DCC MLK tournament, the Denver Open, and the Fall Classic also had record attendance numbers. Credit must be given to outgoing DCC President, Richard Shtivelband and Vice President Lex Huberts for the success of these DCC weekend tournaments. They also arranged the upcoming 2023 Tribute to Martin Luther King tournament. Which will feature three GMs rated over 2600 - click players on the registration page - and like the DCC Fall Classic, we will be paying out another huge 5575 dollar prize fund. Hopefully, we will also set another attendance record. Clearly a high bar has been set for once again DCC President Brian Wall, and newly elected Vice President Juan Brenes, for future DCC weekend tournaments. Speaking of prize money, in January will be paying out a whopping 2912 dollars and 50 cents to the 2022 DCC Tour prizes winners. 1st, 2nd, and 3rd place in 6 rating classes means 18 players will be receiving a late Christmas present.

DCC Tour prize winners may be in this and the first photo somewhere. I never miss a chance to use a room shot :-)

On top of that there are the DCC December Tuesday and Thursday night tournament prize winners. The DCC is like an ATM dispensing tournament prize money :-) So then, on to who won what this month. In the Tuesday night Premier section, Daniel Herman was unstoppable, taking clear 1st pace with a perfect 4-0 score, and winning 135 dollars and 65 cents. Matthew Wofford only lost to Mr. Herman, but that loss was offset by upset wins against both Griffin McConnell and Chris Peterson. Everyone knows they are both hard to beat. Mr. Wofford's 2nd place finish won 87 dollars and 39 cents. 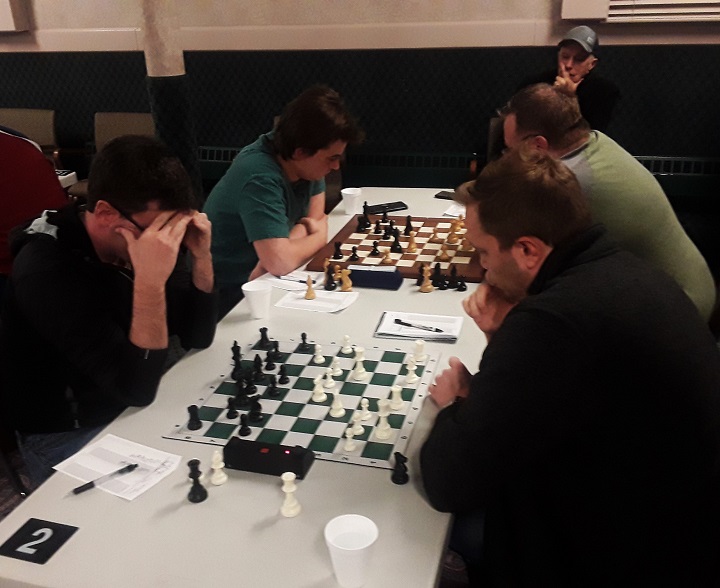 Incoming DCC Vice President Juan Brenes shares the 3rd place prize of 54 dollars and 26 cents with outgoing DCC President Richard Shtivelband, but Mr. Brenes also won the 20 dollar Honorable Mention Upset prize for his round 2 win over NM Peterson. I doubt if Chris has ever lost 2 out of 4 games in a tournament. It was good to see Kevin Seidler back at the DCC, if only for one game. He was paired in round 1 against much stronger than his rating, Turpana Molina, and a 262 point rating difference won Mr. Molina the Premier section 30 dollar Best Upset prize. 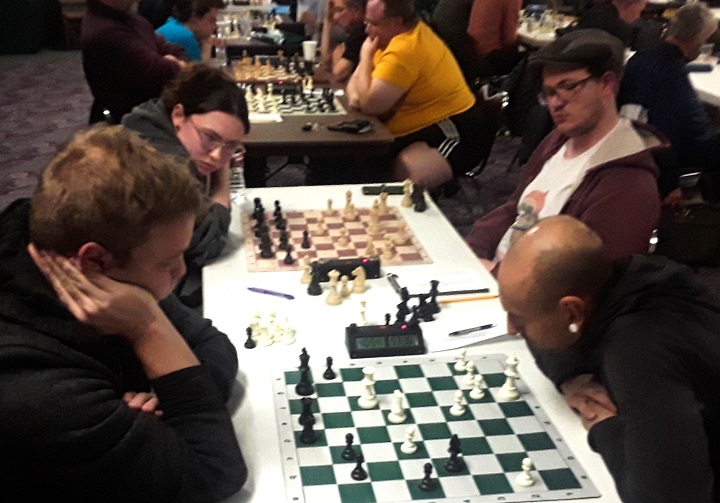 Sara Herman (b) and Griffin McConnell (w) seem more interested in the Chris Peterson (b) vs DCC Vice President, Juan Brenes game than their own :-)

Sai Dasari whomped and stomped his way to 1st place in the Tuesday night U1900 section. The youngster finished with 3.5 points that were taken from the four way higher rated players that he faced. The rating point difference totaled an astounding 947 points!! This outstanding result won 130 dollars and 93 cents. Ricardo Bogaert held Sai to a last round draw and finished tied in 2nd place with Luis Jimenez, Abhijay Balamurugan, and Cole Strong. They all ended up with 3 points, and each player won 32 dollars and 73 cents. Mr. Bogaert - the old man in this group :-) - was also held to a draw by another youngster who plays very well, Kaavya Sakthisaravanan. She finished out of the money but her 2.5 points were all upsets along with a round 2 bye. 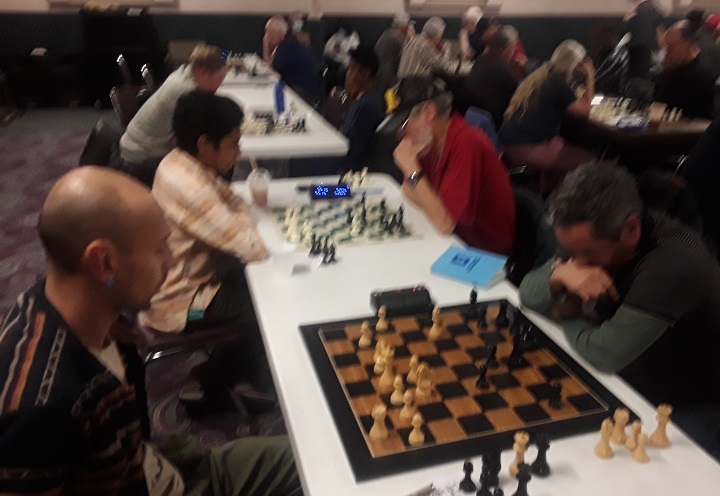 A fine blurry photo of Sai Dasari (w) vs. Ricardo Bogaert (b) in the background. Turpana Molina (b) vs. Juan Brenes (w) in front

The actual 30 dollar U1900 Best Upset prize was won by Shirley Herman for her last round 632 point upset win against Matthew Sitzmann. Ms. Herman was quite pleased to win the prize, as she had to have played a great game. The 20 dollar Honorable Mention Upset prize was won by Dan Nolan for his last win against DCC Secretary, Madeleine Finch. Ms. Finch is studying to become a USCF Tournament Director, which the DCC is currently in dire need of. Madeleine has proven to be a big asset for the DCC by helping at the registration table, and most of all, by helping me set up the tables and chairs :-) 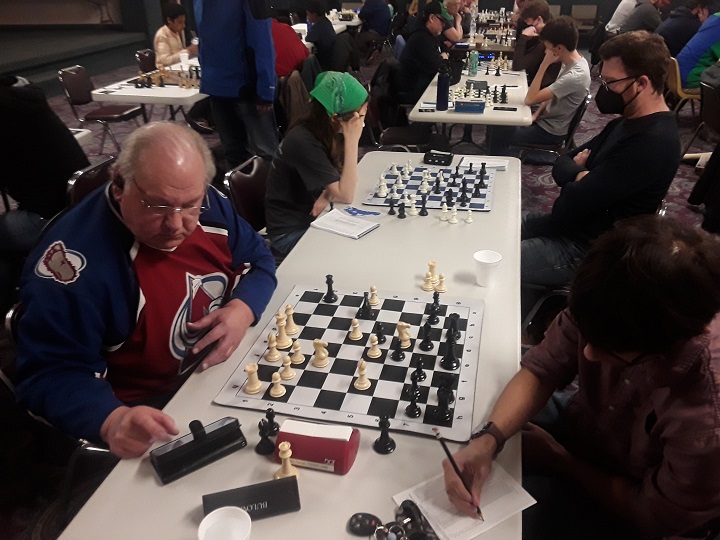 Mark Fischer (w) vs. Demetrius Ramos (b) recordings their moves. Madeleine Finch (w) vs. Dan Nolan (b) on the other board.

In the Tuesday night U1500 section, I was glad to see long time DCC player, Mark Fischer, take the 1st place with a 4-0 score. A perfect score that earned Mr. Fischer 130 dollars and 93 cents. In addition, he also won the 30 dollar Best Upset prize for his round 1 win over Brandon Morris. Probably most satisfying to Mr. Fischer was his score also included two other huge upset wins. The combined 2nd and 3rd place prize is shared by Tyler Poole, Gnaneswar Doppalapudi, and Demetrius Ramos who all ended up with 3 points, and they each won 43 dollars and 64 cents.

The 20 dollar Honorable Mention Upset prize goes to Joshua Bishop for his round 1 win against the strong Seth Fortinsky. Then in round 2 Mr. Bishop also upset Jeff Manuel. I brag on these upset wins because they prove you can't look at a player's rating and assume an easy game. If you do tend to do that, you're likely to lose rating points and likely to not win prize money :-) 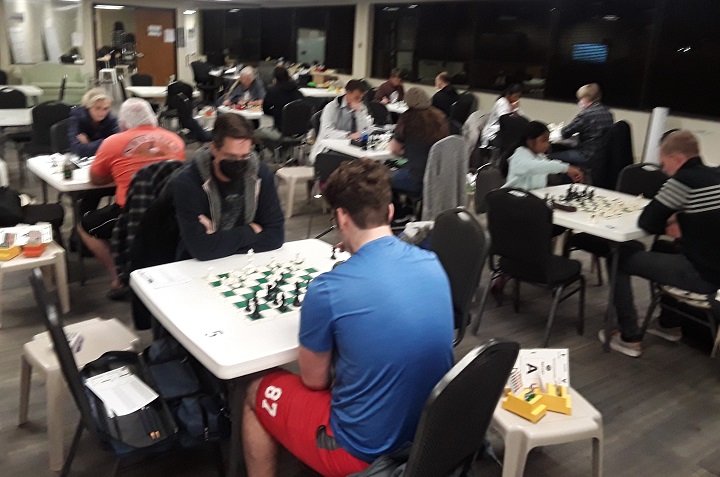 We would like to see more players at the Thursday night location. When we can get into the room the tables and lighting are good :-)

Unfortunately, the last round of the Thursday night tournament had to be canceled when we could not get into the playing room. We had the door access code but not the key for the deadbolt. The proprietor of the bridge club couldn't be reached by email and has since apologized profusely for accidentally key locking the door when she forgot it was Thursday, and the chess club would be coming later in the evening. This is extremely unlikely to happen again, but we will be getting a key, and now have a phone number to call in the event that it does. The DCC apologizes to the players who were inconvenienced by this incident. Anyone who prepaid an entry fee for the round will get a refund or a free Tuesday or Thursday night entry.

So then in the Thursday night Premier section after four rounds Richard Shtivelband was leading with 3 points and won the 1st place prize of 78 dollars and 88 cents. Brian Wall (see diagrams #1 thru #3 below) and Daniel Herman (#5 thru #7) had 2 points and they split the combined 2nd and 3rd place prize of 78 dollars and 88 cents. There were no Upset prizes awarded due to the fact that there were no upsets in this section :-) 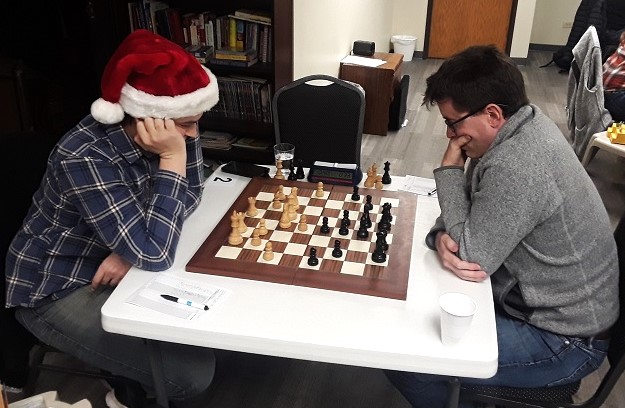 Daniel Herman, in the Santa hat, has the White pieces against Mattew Wofford.

Kristopher Zelkin finished with 3 points in the Thursday night U1900 section to take 1st place and win 76 dollars and 56 cents. Luis Jimenez, Abhijay Balamurugan, and Jacob Zarin all ended up with 2.5 points and each player won 25 dollars and 52 cents. Andrew Bueche won the 20 dollar Upset prize for his round 1 win against yours truly. I believe I had a winning position up until I overlooked a game changing check and went down in flames. C'est la vie. 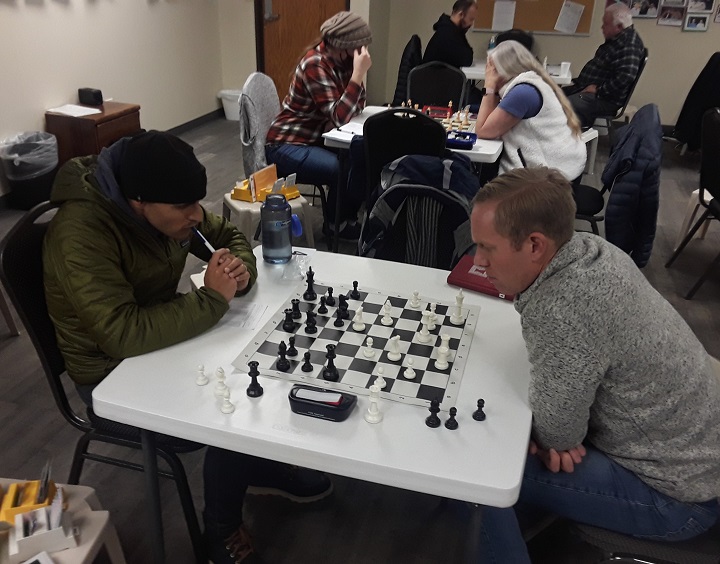 AJ Blair ruled the Thursday night U1500 section. He had three big upset wins and a last round win over none other than Shirley Herman to take 1st place and win 76 dollars and 56 cents. In addition to winning the 20 dollar Upset prize for his round 1 win against DCC Tournament Director, Brian Ledsworth. Be careful who you win against Mr. Blair :-) Weston Taylor won 45 dollars and 94 cents by finishing in 2nd place with 2.5 points. 4 players tied for 3rd place. Tom Needham, Glen Holguin, Petra Lambert-Gorwyn and Ms. Herman all ended up with 2 points and they each won a not so whopping 7 dollars and 66 cents :-) 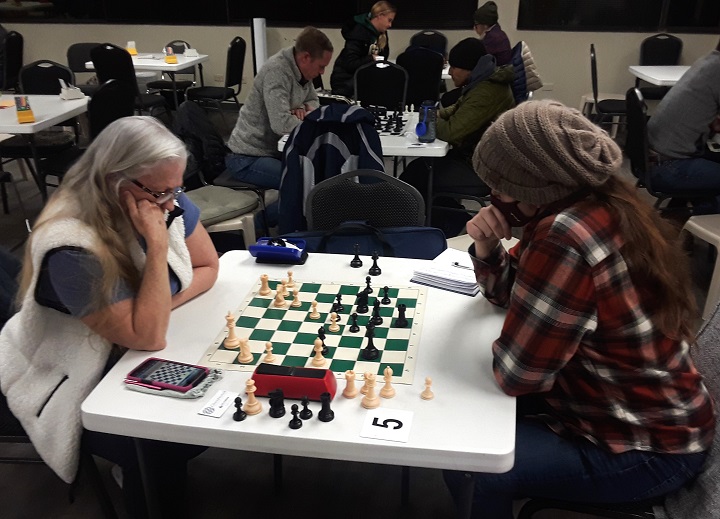 The DCC is looking forward to 2023. We hope to keep both locations open and newly elected DCC President, Brian Wall, intends to add several one day special Saturday tournaments, and perhaps another major weekend event as well. All that the DCC has become is only due to the players that are attending and playing in our tournaments. A big THANK YOU to one and all.

1) Brian Wall vs. Richard Shtivelband. Round 2 Thursday. This series of diagrams will show in some positions just how difficult it is to make a choice between one move or another. Quoting Brian Wall, "...sometimes you have to stop searching for safety and embrace the madness." In this position NM Wall played 35. Ne4??? saying, "...practically the only way not to win." Find several much better moves. See NM Wall's answers to this and the following diagrams below after the last diagram.

1b) the same game After 37. Qe3-a3 Find what Brian says is "A great saving move by Richard I completely missed."

2a the same game After 20 ...Qh4-h5. First, do you see how White can win the Black Queen? Second, what would have been Brian's reply? If not going for that line, what would have "absolutely terrified" NM Wall? if not either of these ideas, what did Mr. Herman actually play? I admit this is not a take, take, mate diagram :-)

2b) the same game After 35... e3 Brian says, "It looks bad, but Daniel has a miracle save with 36 xx!!! What is the miracle xx!!! move? Brian notes that "Daniel did not have much time to find computer miracles."

4) Daniel Herman vs. Joel Senger. Round 1. Tuesday. Final position. The Bishop is trapped and there is some pressure on the Kingside :-) Mr. Senger resigned. At move 24. Rg1xg7 Mr. Herman's comment is "A gradual kingside buildup into a rook sacrifice that must be accepted." It wasn't :-)

5) Turpana Molina vs. Daniel Herman. Round 2. Tuesday. After 18. Qd1-d2 Quoting Daniel Herman, "White attacked on the flank before he was fully developed and castled and black was able to strike with a well-timed... (complete the sentence) See Mr. Herman's answers below after the last diagram

5a) the same game In this position after 30. Bg3-f2 Mr. Molina complimented Mr. Herman's next move. What was the move?

6) Daniel Herman vs. Matthew Wofford Round 3 Tuesday. In this position after 13. Bg5-h6 why can't Black just play ...Rf8-e8? Mr. Herman says, "Black got some counterplay for the exchange in the game but white was always at least a bit better."

7) Richard Shtivelband vs. Daniel Herman. Round 4. Tuesday. After 26...Qb4-e7 Daniel says "both players saw that White could force a perpetual". Do you? If not, see the answer after Brian Wall's answers below. NM Shtivelband "wanted more" and passed up the opportunity. Then Mr. Herman "...was able to convert the extra material"

8) Rocky Aliberti vs. Seth Fortinsky Round 4. Tuesday. In this position White has just played 19. Nh4-f3. What did Mr. Aliberti overlook?

Thanks again to all, and my New Year's wish for all DCC players is USCF rating points and prize money :-)