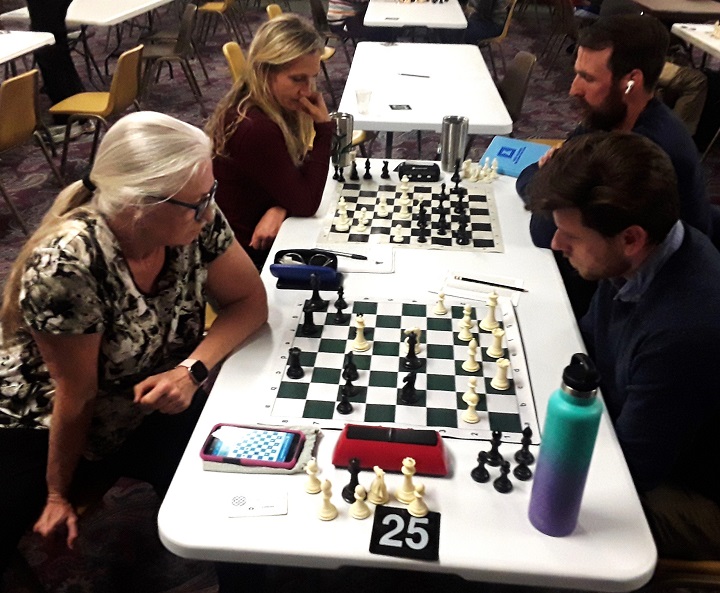 ...but certainly just as capable of enduring the stress and pressure of a tournament chess game.

FIDE declared 2022 to be the year of Women in Chess . Of course, I didn't know this till Ann Davies pointed it out to me recently. The DCC along with the CSCA would also like to see more women playing in Colorado chess tournaments. Tournament chess is a sport that does not require physical strength but does require mental acuity and stamina. I've always thought that in general women are smarter than men. Maybe not as physically strong, but certainly just as capable of enduring the stress and pressure of a tournament chess game. The heading photo is Shirley Herman (b) against Michael Toth and Petra Lambert-Gorwyn (w) is playing Jeff Manuel.

So why don't more women play chess? I don't think it's because they are not competitive by nature. I believe in some ways women are just as combative as men, or even more so when competing against other women. World Champion Bobby Fischer once said something like he "could spot any woman a Knight and still win easily". An arrogant male statement if there ever was one. I wish Judit Polgar could have taken him up on the bet. She would have cleaned his clock :-) 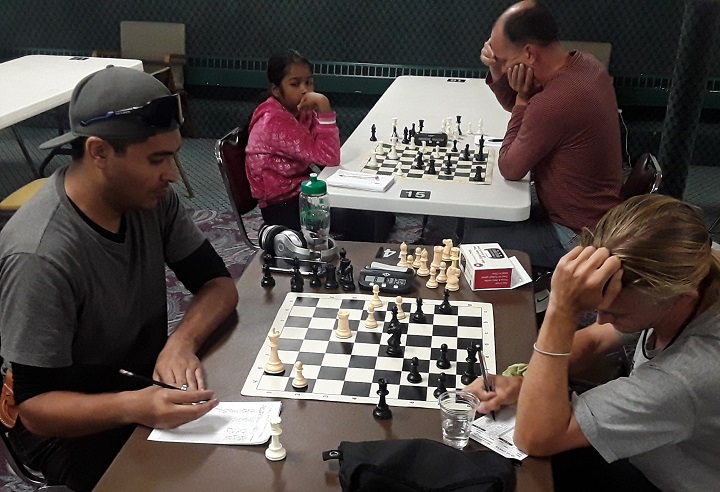 Kaavya Sakthisaravanan (w) is checking out the Alex Barraza (w) vs. Jacob Zirin game while her opponent, Matthew Sitzmann, tries to hold his head together :-)

Ms. Davies and DCC board member, Madeleine Finch, are working on ideas for a DCC event that will encourage more Colorado women to participate in a tournament designed to attract and be favorable to women and girls. That's another thing that is great about chess. All ages can compete on an equal basis. More power to Ann and Madeleine both. Hopefully, they will come up with a great idea to add to the DCC tournament calendar. 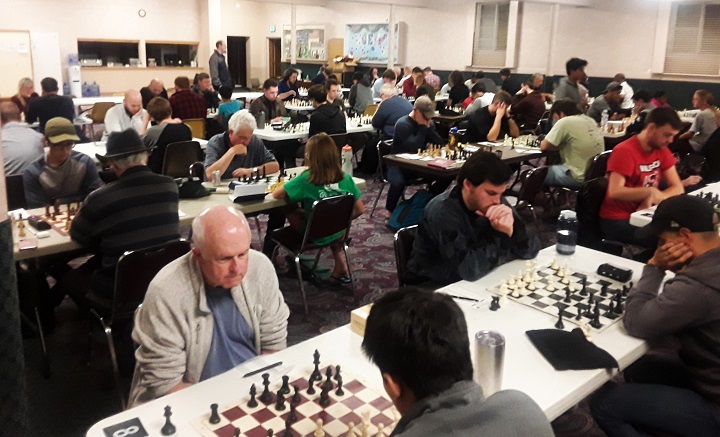 Round 2 on Tuesday night is underway

That said - and hopefully nothing I've said will get me in trouble :-) I'll get on with who won what in the October DCC tournaments. Tuesday night attendance remains great and steady. Through the course of the year, we have been averaging over 100 players each month playing at least one game. With 70 to 80+ USCF tournament players playing each week. Our record week so far was 92 players!! In addition to usually 4-6 casual players. I really like it when new players come into the club and say something like, "Wow. I didn't expect anything like this". 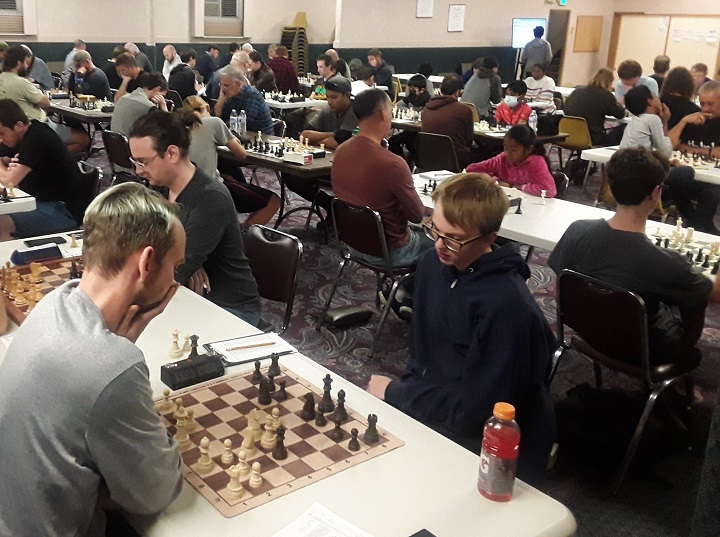 There has always been some question about what the rating cut off should be for our Premier section. The DCC settled on over 1700 and also to allow Unrated players. Mainly this was to get enough players in the section to not have pairing problems. With all the online tools and round the clock playing opportunities, there is no telling how good an unrated player may actually be. Also looking at the upsets in this section this month it's apparent that a lower rated player can also be much better than their rating. 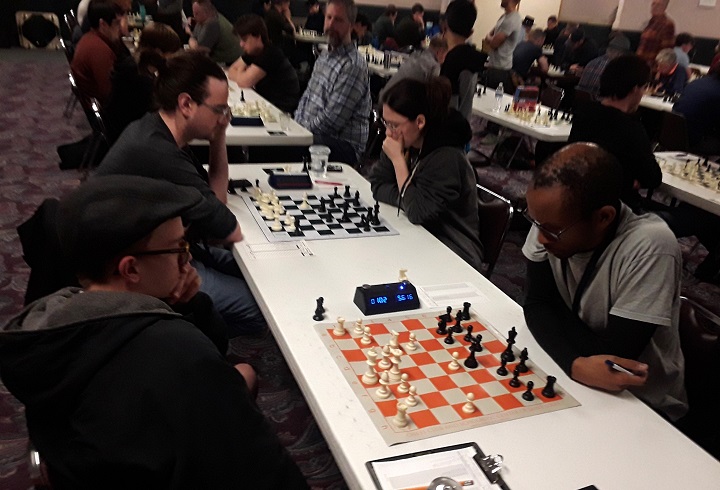 Of the Tuesday night Premier section prize winners only Sullivan McConnell did not have any trouble. His perfect 4-0 score took 1st place and won 226 dollars and 77 cents. I'm sure Sullivan enjoys winning the prize money and I'm also sure he would welcome more strong competition. Colorado's only IM hasn't played in a Colorado tournament in years. Hello Michael Mulyar, Sullivan and the DCC is looking for you. Perhaps a private match could be arranged, would that work for you, International Master? 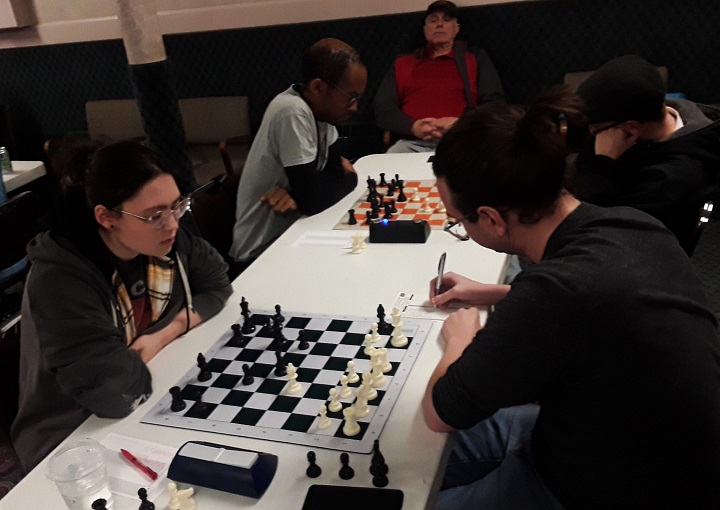 Mark Brown - rated 1841 - took 2nd place with 3 points. Losing only to NM Brian Wall, in round 1. Mr. Brown upset Experts Joel Senger and Sara Herman in round 3 and 4, to win 136 dollars and 6 cents. Expert Alex Steger and Caleb Pena. tied for 3rd place with 2.5 points, and each won 45 dollars and 36 cents. Mr. Steger had to have played very well to win against Daniel Herman in round 2. 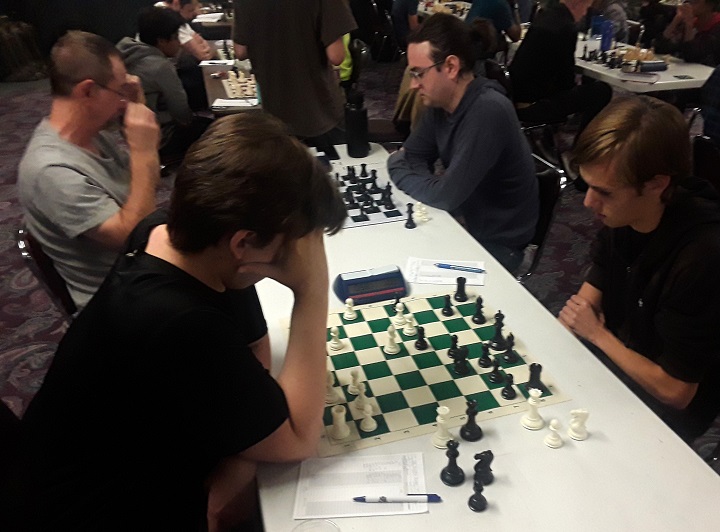 Caleb Pena with the Black pieces holding Daniel Herman to a draw.

Mr. Pena - rated 1741 - played even better to - after a round 1 bye - win against Craig Moffit, then draw both Mr. Herman and Mr. Steger. Caleb's upset rating point difference totaled 544 points!! The 30 dollar Best Upset prize in this section was won by Earle Wikle for his 175 point draw over NM Richard Shtivelband. The 20 dollar Honorable Mention Upset prize was won by Juan Brenes, who also beat the DCC President. 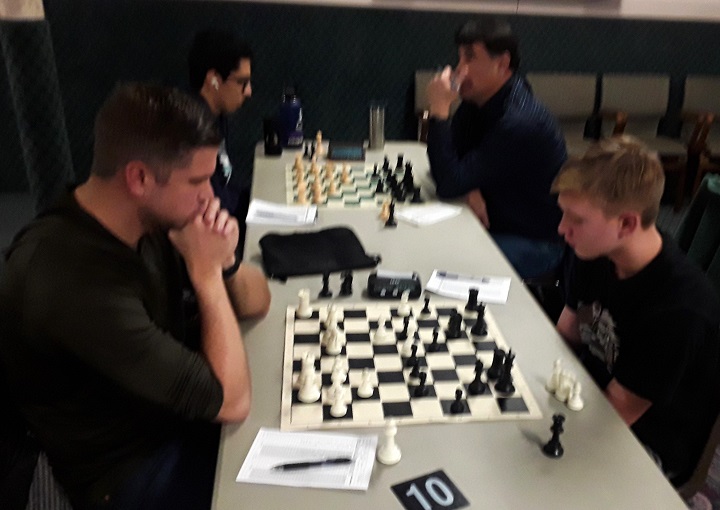 Once again, the Tuesday night U1900 section was won by Jason McEwen ( see diagram #5 below) with once again a perfect 4-0 score. Jason's study and hard work on his game is paying off. Paying off to the tune of 219 dollars and 37 cents. Mr. McEwen's score included a small upset win against Jeremy Roldan in round 3. Jeff Nohrden and Luis Jimenez also had 3 points going into the last round. Appropriately they were paired against each other, and the result was Mr. Jimenez holding the higher rated Mr. Nohrden to a hard earned draw. 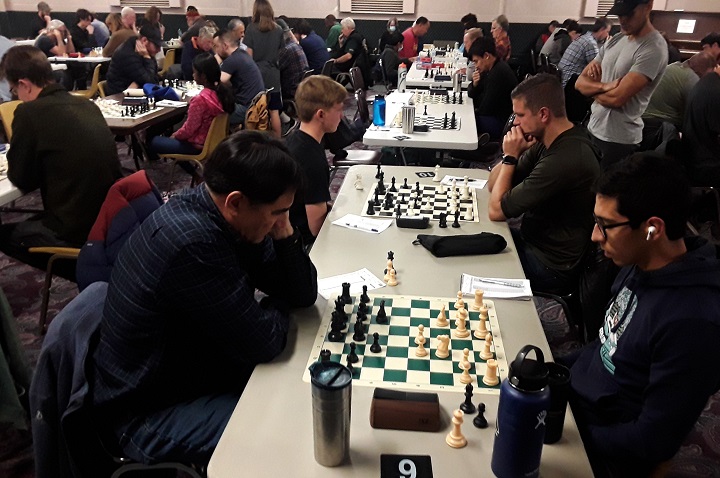 They share the combined 2nd and 3rd place prize of 219 dollars and 38 cents.. I'm pleased to report that Rob Glasscock, the DCC Treasurer, gets to write himself the 30 dollar Best Upset prize for his 228 point win over the strong Drew Tuck in round 1. The 20 dollar Honorable Mention Upset prize was won by Turner Brown, who won against the 223 points higher rated Kristopher Zelkin, also in round 1. 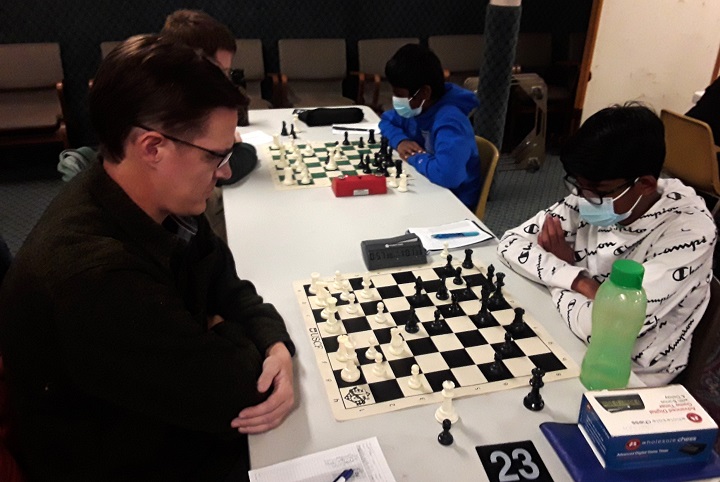 In the Tuesday night U1500 section Joe Welsh also was an upset winning player. Taking 1st place with a 4-0 score. Three of Mr. Welsh's points were from upsets totaling 414 points. In an email Joe said, "I've been having such fun playing on Tuesday nights." I guess :-) Winning is fun and profitable at the DCC. Mr. Welsh won 219 dollars and 37 cents. With 3 wins and a last round bye, Sourabh Bhange won the 2nd place prize of 131 dollars and 62 cents.

There was a 4 way tie for 3rd place. Barrett Altman, Jeff Manual, Karthika Sakthisaravanan, and Gnaneswar Doppalapudi all scored 3 points and each player won 21 dollars and 94 cents. The 30 dollar Best Upset prize was won by Parker Banks for his huge round 637 point over Richard Bates. Tanay Kayaru wins the 20 dollar Honorable Mention Upset prize for his 1st round win over Zachary McClain.

Thursday night monthly attendance is holding steady, but weekly participation is not increasing as much as we would like. Nevertheless, we intend to stay with the location, as long as financially possible, since we are seeing new players there that we haven't seen on Tuesday nights. Which was our hope when we opened the second site. 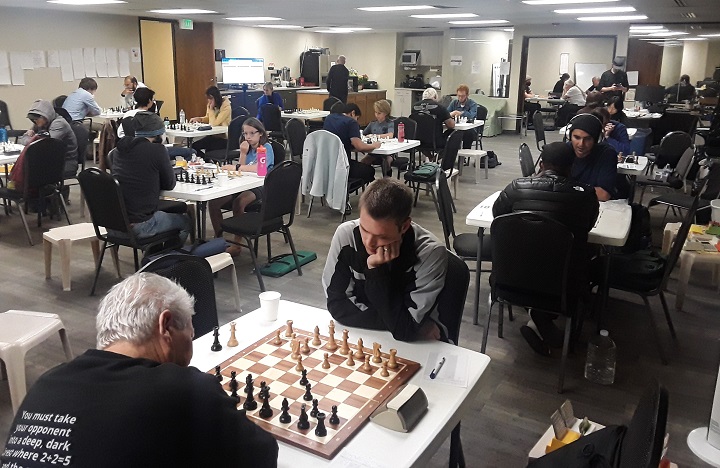 Of the 12 players who registered for the Thursday Premier section, 9 were rated over 2000, and that included 4 Master level players. Talk about competition!! There would be no predicting the winner. As it turned out Griffin McConnell took 1st place with a perfect 4-0 score. Winning against USCF Masters Daniel Herman and Richard Shtivelband, Expert Alexander Steger, and way stronger than his 1850 rating, Turpana Molina, in the last round. Griffin's fine showing earned 128 dollars and 72 cents. Griffin, and his brother Sullivan, combined to play eight USCF rated games at the DCC in October and scored eight points. You can't do better than that. 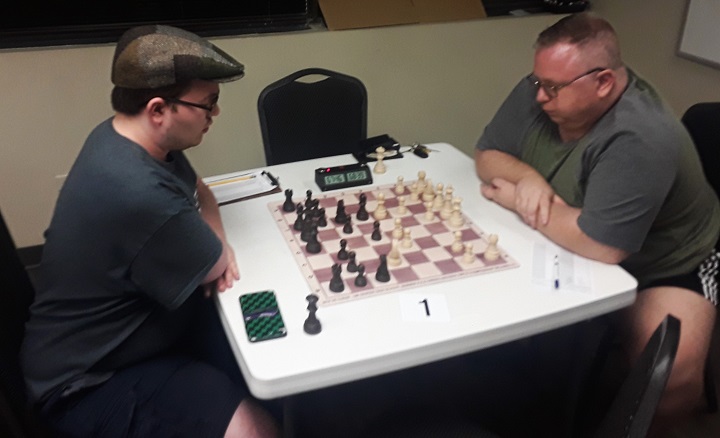 Griffin McConnell wearing a cool cap has the black pieces against Richard Shtivelband.

To take 2nd place Daniel Herman had to also upset Mr. Shtivelband to finish with 3 points and win 77 dollars and 23 cents. Mr. Molina won against William Wolfe and had a forced 3rd round bye to end up with 2 points and take the 3rd place prize of 51 dollars and 49 cents. There were no other upsets in this section, on so no Upset prize was awarded. As an indication of the competition, Mr. Steger had to face Masters Griffin, Daniel, and a higher rated Expert, Matthew Wofford. A tough row to hoe. His 2nd round win against the strong Chris Motley I guess was some consolation. 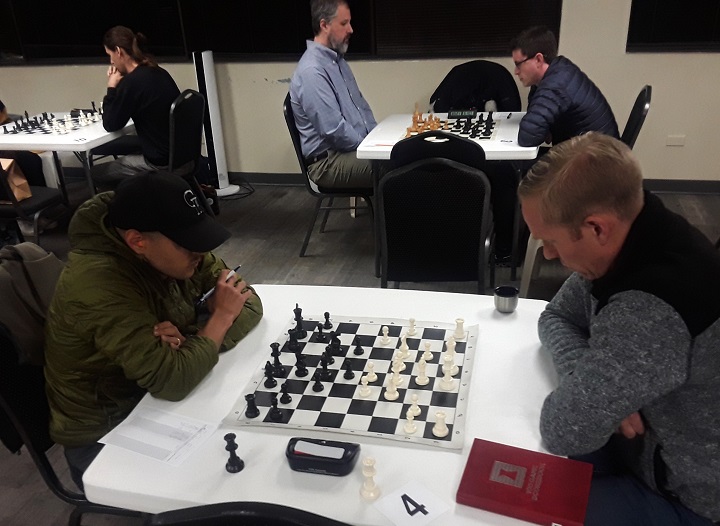 Kristopher Zelkin (b) vs. Drew Tuck (w) Back board is Alex Steger (w) vs. Matthew Wofford (b)

The 17 player Thursday U1900 section was won by Kristopher Zelkin and Drew Tuck. They each finished with 3 points. Mr. Zelkin started off with two draws then won against Michael Igoe and Mr. Tuck in the last round. They share the combined 1st and 2nd place prize with each player winning 99 dollars and 71 cents. Grayson Manuel won the 3rd place prize of 49 dollars and 86 cents with a 1st round bye and wins against Phil Brown and Seth Lichtenstein. The 20 dollar U1900 Upset prize was won by Datreio Leverston for his huge 475 rating point difference win over the hard to beat, Alexander Barraza. 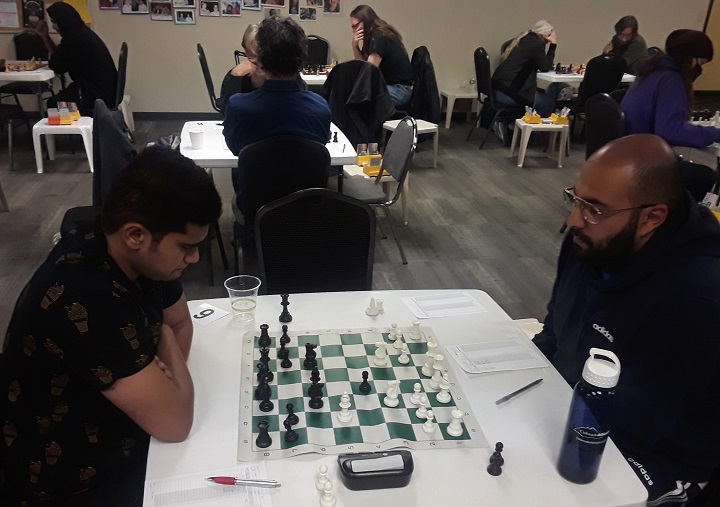 In the 25 player Thursday U1500 section Sourabh Bhange played like Griffin McConnell and won all his games. Mr. Bhange takes home 124 dollars and 64 cents for his outstanding performance. As mentioned above, Mr. Bhange also won money in the Tuesday tournament. William Kunesh, Joshua Green, and Mitchell Beyer each ended up with 3 points and they share the combined 2nd and 3rd place prize of 124 dollars and 65 cents. The youngster, Rocco Degeest lost to Sourabh and Mr. Green but won the U1500 20 dollar Upset prize for his round 2 win against the 644 points higher rated AJ Blair. Mr. Blair had a rough tournament. Also giving up wins to much lower rated Shirley Herman and Glen Holguin. I'm sure he will be looking for revenge in November.

It was a meager DCC Games Section this month. So, I asked NM Brian Wall for a couple of interesting positions from his other tournaments. If more games from the DCC October tournaments are added to DCC Games, more games will be added here.

1) Nick Peterson vs. Brian Wall. Round 2. Thursday. After a tactical sequence White has played 25. Nd7-e4+. Having sacrificed an exchange to have a Knight and 2 pawns against the Black Rook, and two strong players battle it out. Which side would you rather play?

1a) the same game NM Wall has insisted that I add another couple of diagrams because "I missed all the good stuff". White has just played 17. Ke3. What is the best move in this position?  See Brian's answers to #1a, 1b, #3, and 3a below after the last diagram.

1b) the same game NM Wall has just blown all chances of winning by playing 70...Ke3-e4. What would you play in this position?

3) Lior Lapid vs. Brian Wall This game is from one of Kevin McConnell's arranged Master-Expert tournaments. Brian has a list of players who always give him a difficult game. NM Lapid is on the list along with Sullivan McConnell and Richard Shtivelband, and others. In this position, after 15. Bg7-d4 NM Wall regretted playing 15...Ng4xf2. What is a better move?