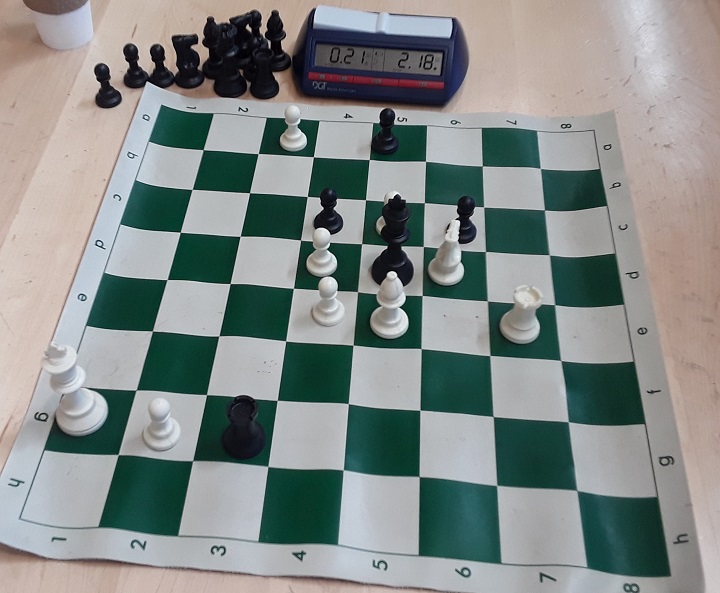 ...but Ms. Herman herself also plays a good game.

Normally the monthly DCC prize money payout is determined by total entry fees minus a set amount for expenses. Mainly room rent, the USCF rating fee, and scoresheets. DCC Officers and TDs are not paid anything. Attendance at the DCC Thursday night monthly tournament remained good with 56 players playing at least one game. But in August more players attended each week resulting in an over 1000 dollar prize fund. Therefore, to avoid a "measly" prize payout this month we supplemented the prize fund with money from the DCC Treasury, and only paid out one Upset prize for each section to make a sure not bad 880 dollar payout.  My best guess is with an average weekly Thursday night attendance of 40 - 50 players, the DCC wouldn't have to rob Peter to pay Paul. 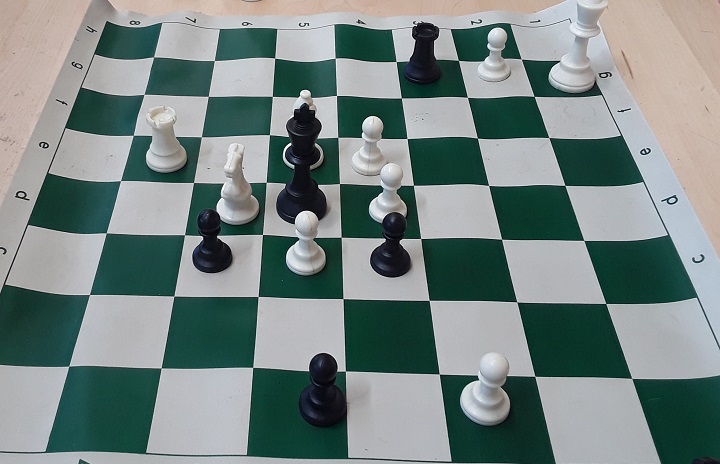 Normally, here I'd have a Thursday night room shot but ...

Note: If you are wondering about the heading and this photo. It's a slick Don Ogle checkmate in a blitz game against Dave Rameriz. Don is a blitz chess wizard. The last move was e2-e4. You don't see mates like this every day, but it is not related to the September DCC tournaments in any way. Also, I am a known space case, and I failed to take any pictures of the Thursday night tournament. So I've substituted John Brezina photos from the 2020 CSCA Scholastic Championship for the players mentioned in the following DCC Thursday night report. What can i say :-) 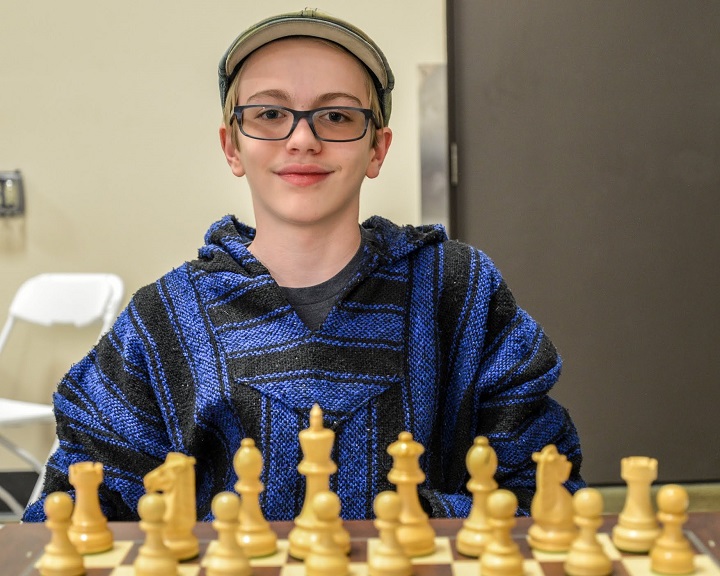 Sullivan McConnell with a confident grin... 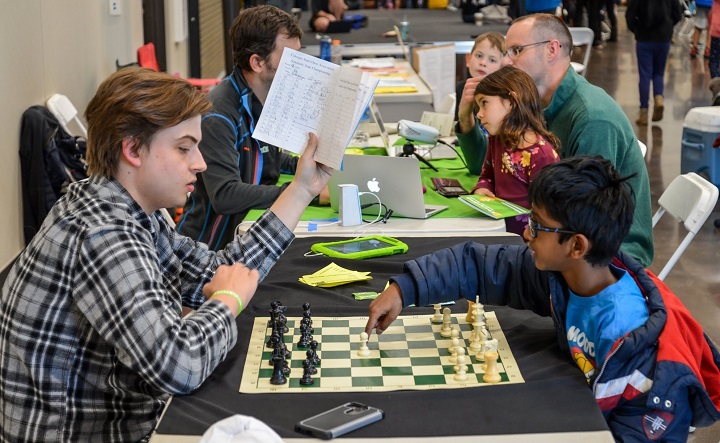 ... and Daniel Herman coaching a young player at the Scholastic Championship.

That said, on with who won what at the DCC September tournaments. In the Thursday night Premier section, Sullivan McConnell and Daniel Herman each finished with 3 points when Daniel held Sullivan to an upset draw in the last round. It is likely that if Sullivan had not been forced to play his brother Griffin in round 3, with the resulting draw, he would have won against whoever else. Daniel's other half point was a 3rd round bye. So that too could have been a full point, had he played. Anyway, they share the combined 1st and 2nd place prize with each winning 111 dollars and 82 cents. 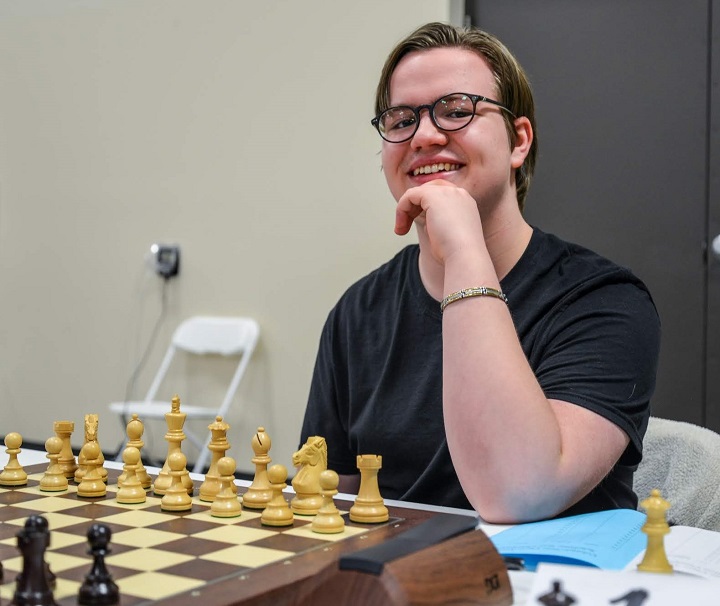 Griffin McConnell with a big smile... 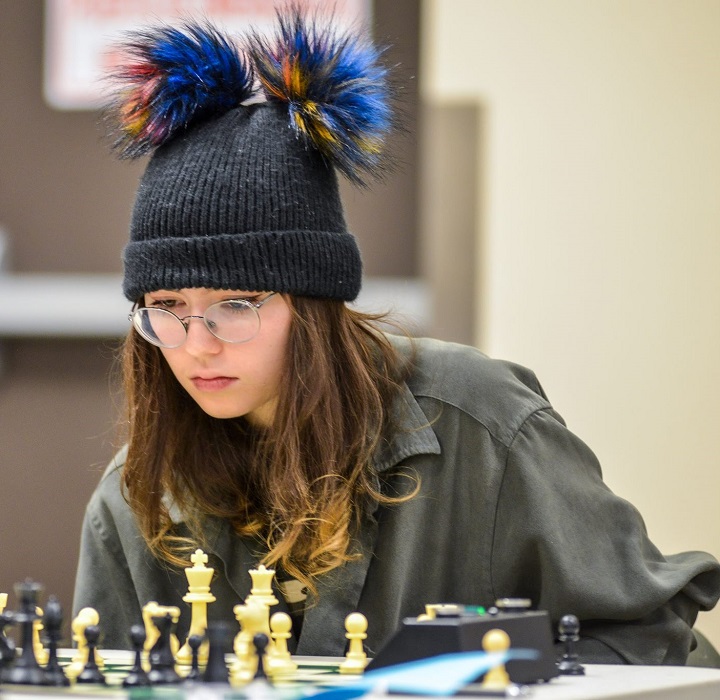 Matthew Wofford, Sara Herman, and Griffin McConnell all ended up with 2.5 points. Griffin, in addition to drawing his brother, also had a big upset draw against NM Richard Shtivelband. Mr. Wofford held Griffin to a last round upset  draw. So - with no other draws in this section - rather than split the 3rd place prize 3 ways, Griffin was awarded the 20 dollar Premier Upset prize. Leaving Sara and Matthew to share 3rd place and they each won 27 dollars and 96 cents. 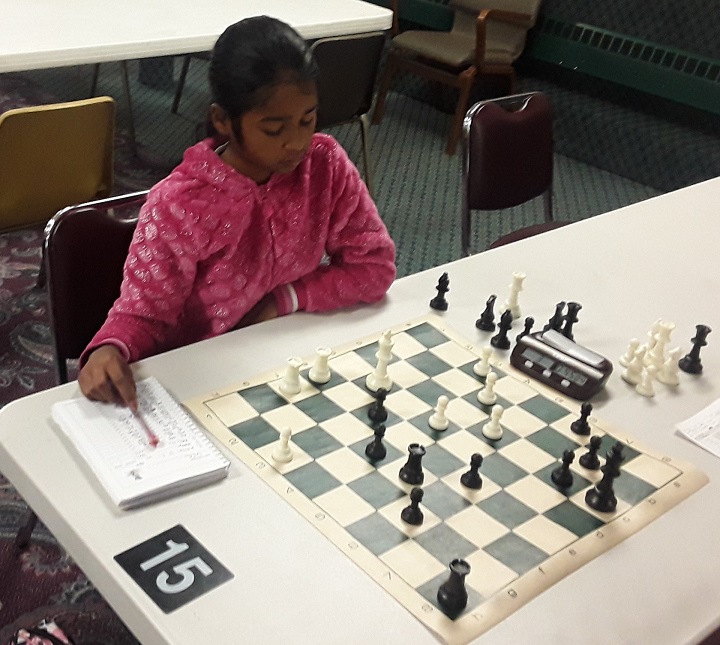 ...and this is Kaavya Sakthisaravanan. Shown here playing on Tuesday night.

Notable in the Thursday Night U1900 section was Kaavya Sakthisaravanan's. performance. The youngster finished with 3.5 points. All big Upset wins and a round 2 bye. Her rating point difference totaled 782 points!! I should mention that Kaavya also had no trouble wiping me off the board last Tuesday night. The youngster shares the combined 1st and 2nd place prize of 216 dollars and 60 cents with Drew Tuck. Who had to have played very well to win in the last round against Phil Brown. William Wolf took the 3rd place prize of 54 dollars and 15 cents with 3 points. The 20 dollar U1900 Upset prize was won by Tyler Poole for his round 3 win against the strong, long time DCC player, Bill O'Neil. 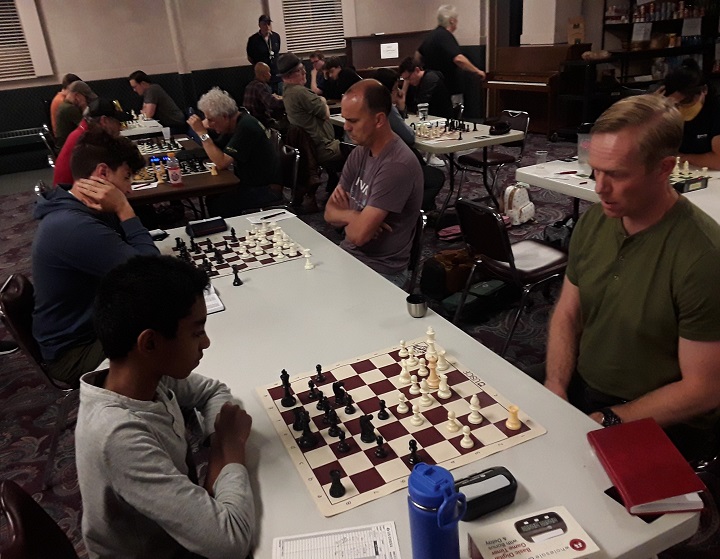 The Thursday night U1500 section 1st place prize of 135 dollars and 37 cents was won by Morgan Showen with a round 1 bye followed by 3 wins. Michael Banks and Rocco Degeest ended up with 3 points and share the combined 2nd and 3rd place prize, with each winning 67 dollars and 69 cents. Mr. Degeest's score includes 2 huge upset wins, that totaled to 1134 points!! The actual 20 dollar U1500 Upset prize was won by Glen Holguin for his 362 point upset over AJ Blair. Mr. Holguin also had a big upset win against Tom Needham.

Tuesday night before the round starts.

The continued outstanding attendance on Tuesday night means we continue to payout a substantial monthly prize fund. This month totaling over 1641 dollars!! What I like most is it is not the same players each month winning all the money. Also, the total prize fund is always divided fairly between the three sections. The Premier section gets 34% and each Under section gets 33%. 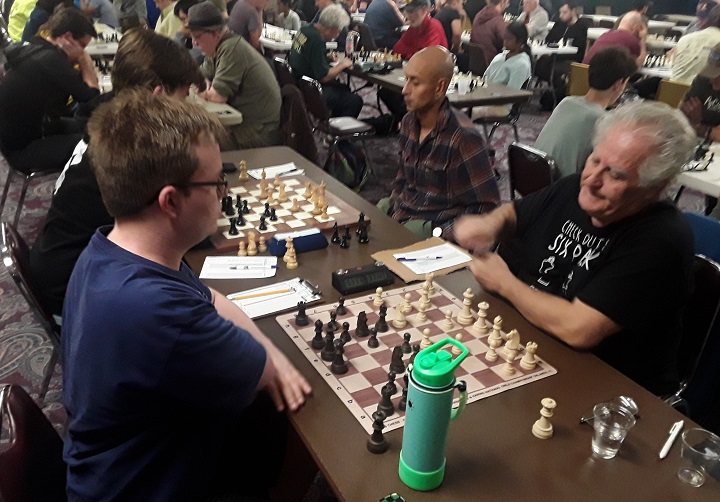 Griffin McConnell (b) against Brian Wall (w) Juan Brenes has the white pieces on the other board.

This month in the Tuesday night Premier section, Griffin McConnell took clear 1st place with a last round win against none other than NM Brian Wall. (see diagrams #2 thru #5 below) The comeback kid finished with 3.5 points and won 253 dollars and 97 cents. Griffin and his brother Sullivan are now - like Sara Herman - streaming chess. Check out their Twitch channel. Both channels are well worth your time. 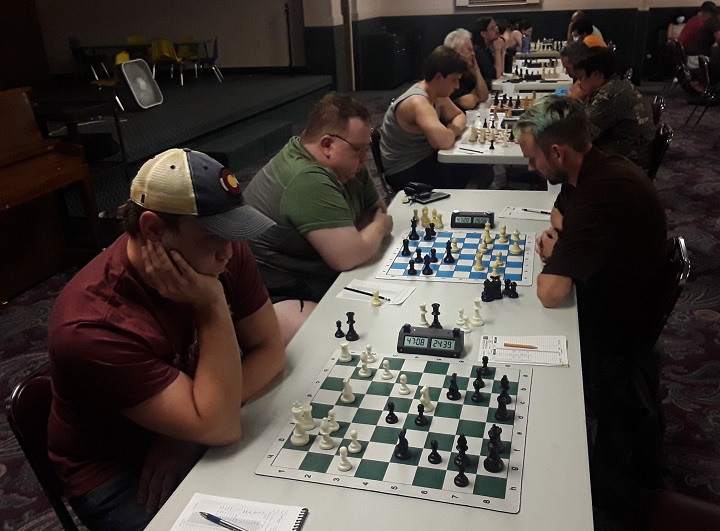 Mr. Wall, Daniel Herman, (diagrams#1 and 1a) and Matthew Wofford all ended up with 3 points and they share the combined 2nd and 3rd place prize with each player winning 84 dollars and 66 cents. Craig Moffit won the 30 dollar Tuesday night Premier Best Upset prize for his 1st round win against DCC President, Richard Shtivelband. The 20 dollar Honorable Mention Upset prize was won by Vedant Margale for his win against Mark Brown. 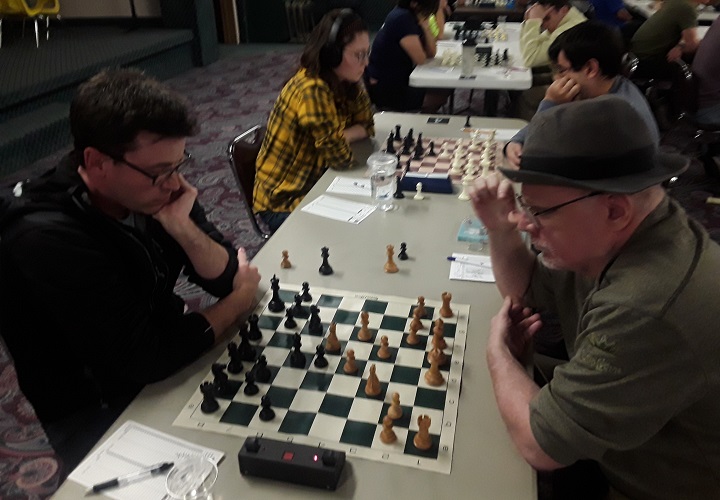 I say it's about time Jason McEwen took 1st place in the Tuesday night U1900 section. Mr. McEwen's perfect 4-0 score won 245 dollars and 77 cents. (diagrams #6 thru #9) Jermey Roldan and Caleb Pena both took last round byes and still won the combined 2nd and 3rd place prize. They each win 122 dollars and 89 cents. 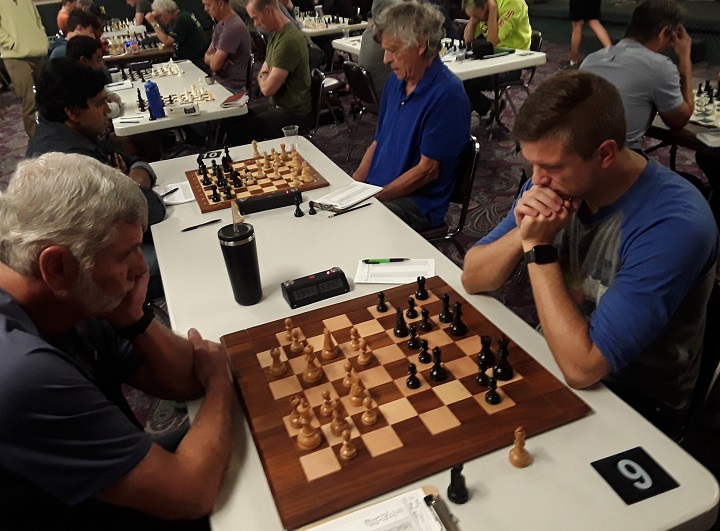 John Krue (w) against Jason McEwen (b) It's good to Mr. Krue back at the DCC. Other board is Vibi Varghese (b) vs. Ken Doykos (w)

Incredibly Bill O'Neil was responsible for all three DCC upset prizes this month. As mentioned above, he lost to Tyler Poole on Thursday night and here in round 2 again lost to Mr. Poole. Then Mr. O'Neil gave up a 500 point rating difference win to Nathan Fraser in round 4. Thus the 20 dollar Honorable Mention Upset prize goes to Mr. Poole, and Mr. Fraser takes the 30 dollar Best Upset prize. I'm sure Mr. O'Neil now has both Mr. Fraser and Mr. Poole on his list :-) 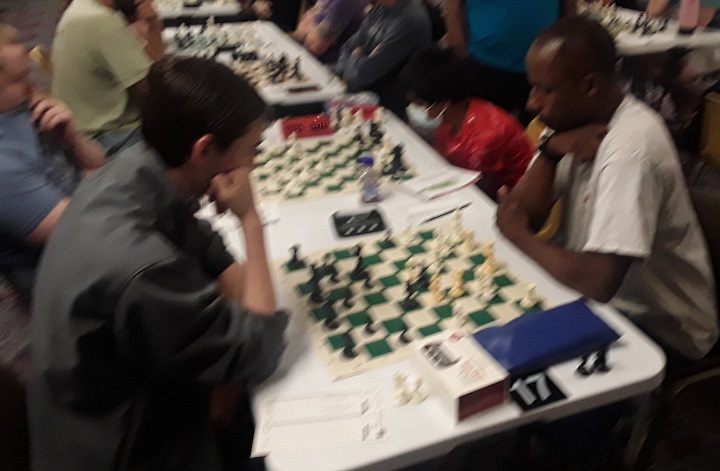 A fine in focus photo of Nathan Fraser (b) playing Bill O'Neil (w). I can sense John Brezina rolling his eyes :-)

This month Jacob Zirin won the Tuesday night U1500 section outright. His perfect 4-0 score won 245 dollars and 77 cents. Not only do Shirley Herman's offspring win money playing chess, but Ms. Herman herself also plays a good game. She shares the combined 2nd and 3rd place prize of 245 dollars and 78 cents with Chad August. They both had a bye and 3 wins. Mr. August's score was all from huge Upsets, totaling 1036 points!! 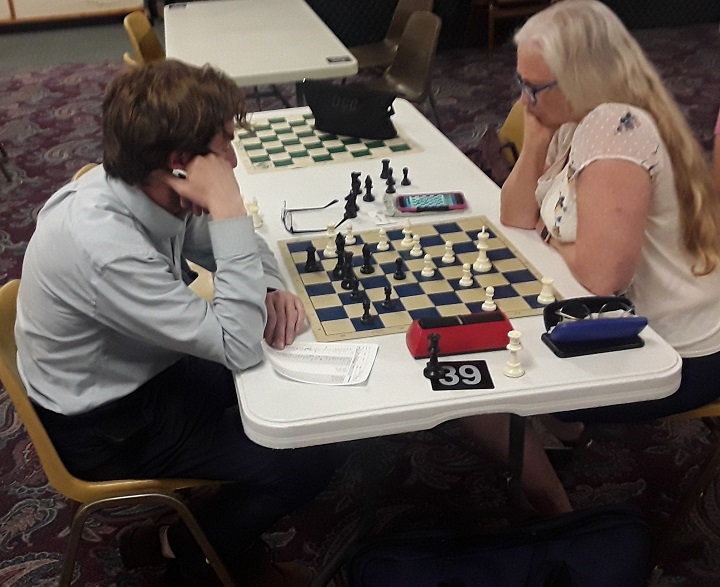 Eric McRoberts (b) vs. Shirley Herman (b)

The Tuesday night 30 dollar U1500 Best Upset prize was won by Vedant Ratnakar for his round 3 win against Brandon Morris. The 20 dollar Honorable Mention Upset was won by Karthika Sakthisaravanan (Kaavya's mom) for her round 2 win over, yes again, Brandon Morris. And again, like Bill O'Neil, I'm sure Mr. Morris has Vedant and Karthika on his list :-) 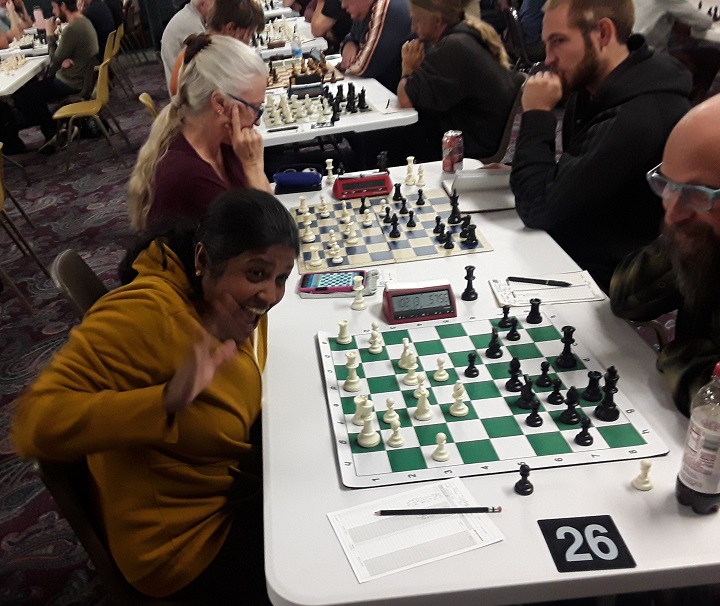 A smiling Karthika Sakthisaravanan is playing Chad August. Shirley Herman (w) is against Brett Renzi (b) 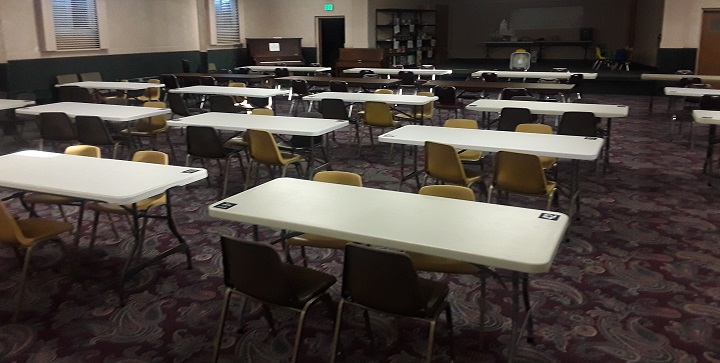 The Tuesday night playing room at around 6:15 pm... 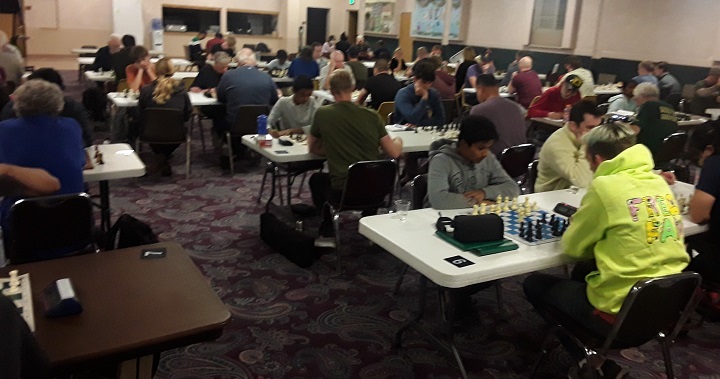 As always, a big THANK YOU to all the players at both DCC locations who are making the Denver Chess Club great, and one of the best chess clubs anywhere.

We'll start out the Games Section with an excellent game from one of Colorado's newest USCF Masters, Daniel Herman.

1) Daniel Herman vs. Kenzie Moore. Round 1. Tuesday. In this position after 21...Kh8, find a Master level move that sets up the following diagram. No fair scrolling down till you think for a while :-)

2) Turpana Molina vs. Brian Wall. Round 1 Tuesday. Final Position. Throughout the game NM Wall picked off Mr. Molina's weak pawns. In the diagram position, Brian says, "I stopped keeping score. Black eventually won the a4 pawn and converted his 3 pawn advantage. At one point I hung my Bishop on e1 but it didn't matter" Of course not to Pawn Wave Guy :-)
3) Brian Wall vs. Juan Brenes. Round 2. Tuesday. After 30. Kg8-h2 Brian says, "Everything wins, there is no real attack." The White kingside and g3 looks a little vulnerable to me, but if NM Wall says there is no attack, then there is no attack :-)
3a) the same game  In this position, to keep your chess card, find mate in 2 after any move by Black. Cancel your USCF membership if you fail to find the mate :-)
4) Matthew Wofford vs. Brian Wall Round 3. In this position in response to 23. a3 Black has just played ...Bb4-f8. What move does Mr. Wofford now play that caused NM Wall to remark "I silently yelled at myself for 5 minutes: How many decades are we going to have this conversation? I spent two minutes after calming down finding a move."

5) Brian Wall vs. Griffin McConnell. Round 4. Tuesday. Final Position, with the comment, "Black eventually won" No doubt a disappointment for NM Wall. Clear 1st place was within his grasp, but it slowly slipped away over the course of the game. Brian coming in nearly 30 minutes late due to RTD scheduling problems didn't help, and perhaps opening with 1. Nh3 wasn't the best choice for a 1st place money game. (Part of Brian's 40 move challenge goal, plus he had told Sara Herman that 1.Nh3 would be his move) Nevertheless Griffin has truly earned his 2200 rating and it is certainly very well deserved.

6) Jason McEwen vs. Rodson Glasscock. Round 1. Tuesday. In this position after 21...Qb7-c8, Find the move that elicits a "Huzzah" comment from Mr. McEwen.

11) Richard Shtvelband vs. Nick Petersen Round 1. Thursday. Final Position. Black resigns. NM Shtivelband has suffered a few tough losses over the last couple of months. He may have righted the ship with this game.