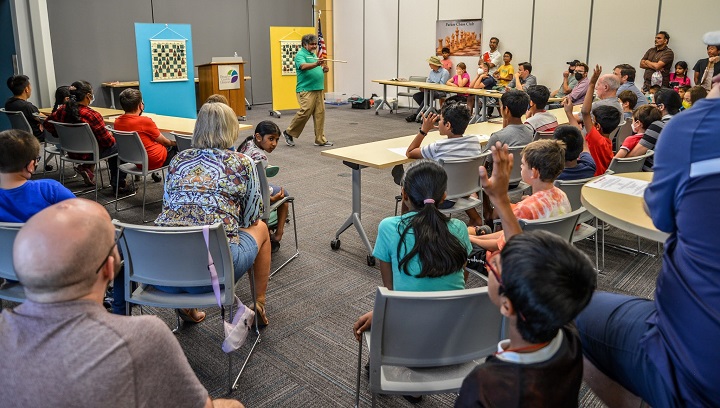 "His superb teaching and communication skills came through clearly..."

Quoting John Brezina: "The Parker Chess Club had a special guest return and deliver another superb lecture to a crowd of over fifty Colorado chess fans. I had the honor of hosting Sunil Weeramantry for his visit to the club along with other special guest visitors. Mr. Weeramantry is the Executive Director of the National Scholastic Chess Foundation and renowned chess coach and author. He has also been a member of the USCF Scholastic Committee since 1986 amongst many other roles. He holds the title of Fide Master and has won the New York State Chess Championship in 1975 and 2001. Perhaps best known as the stepfather and early trainer of Grandmaster Hikaru Nakamura." 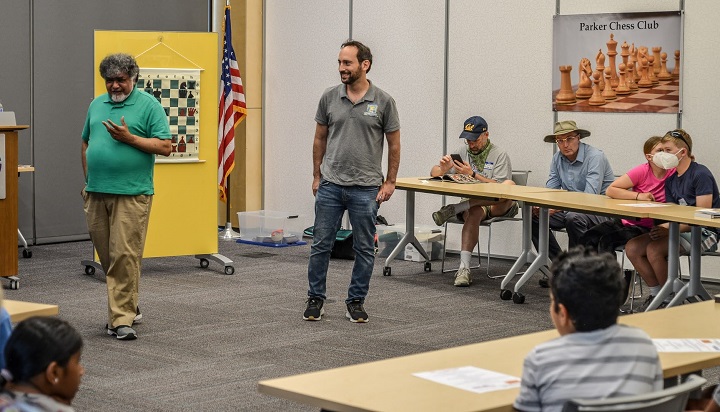 Colorado's own NM Lior Lapid contributing to the lecture.

"Joining us in the audience was NM Kris Littlejohn, Hikaru Nakamura's long-time second. A privilege for us since he had just returned from Madrid, Spain as the FIDE Candidates tournament had just ended. Also in our audience we had former Denver Chess Club President and Life Master Brian Wall, NM Lior Lapid who runs PALS Chess Academy, NM Jesse Cohen who runs Summit School of Chess, and Colorado Springs Chess Club President Paul Anderson. An honor to have them and many others join us in welcoming Sunil Weeramantry back to Colorado." 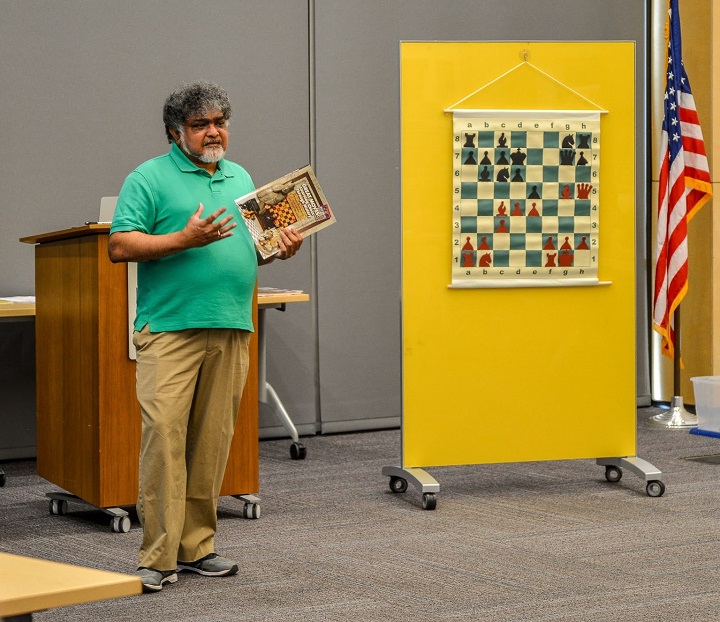 "We had started to set up the room in the Parker library early before lecture time where people had the chance to meet and greet Sunil. He made his way around the room introducing himself and talking with the many kids and adults in our audience. Copies of his two books Best Lessons of a Chess Coach and Great Moves: Learning Chess Through History were available to be later signed. Many had been to his previous lecture at our club in 2021 and Sunil built on his theme of the King hunt in chess. With two demonstration boards he had prepared three games to go over with the crowd." 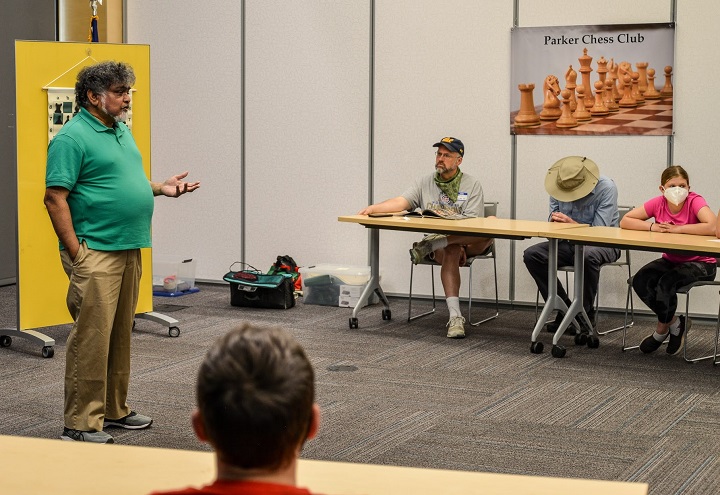 "His superb teaching and communication skills came through clearly in the lecture as he engaged his audience with questions from the position on the board. Whether you found the correct move in the position or not, he made you feel good about thinking through the position and trying different variations. And with stories of players in between he captured everyone's attention from young to old. He has a special way of storytelling that makes you feel a part of the story and keeps you engaged."

Several kids with their hands raised know the answer.

"I enjoyed seeing the audience participation and the great number of kids that would raise their hands when asked about the next move on the board. Some of these moves were not trivial and to see many of our regular kids from our Parker Chess Club answer the move and correct continuation made me quite proud. And in between setups on the demo boards NM Lior Lapid would join in building on the lecture stories and game showing his own great teaching and communication skills. Sunil would occasionally engage with Brian Wall in the audience as well since they have such a vast history and knowledge of chess. Both have over half a century each of high level chess and stories, living legends that we are lucky to have in our midst." 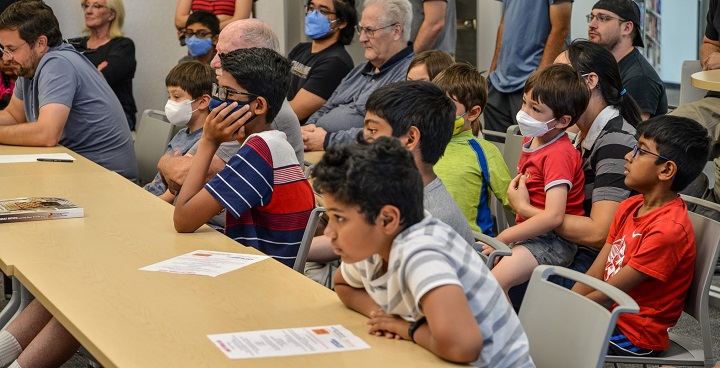 The old guy in the picture is NM Brian Wall and there is rapt attention from the audience as... 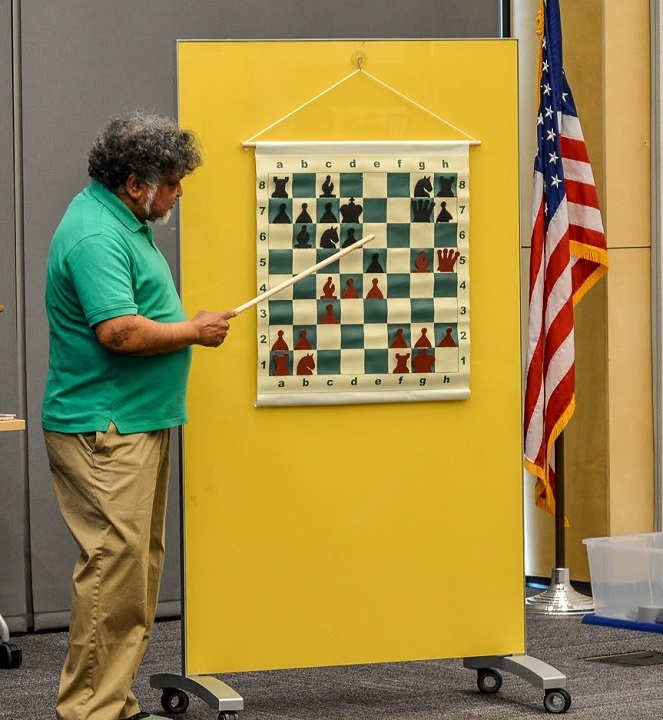 ...Sunil highlights a critical square in the position.

"Before we knew it, an hour and a half had passed and we had to start wrapping up the lecture. Enough time was left for fans to catch a photo with Sunil and for him to sign copies of his books. Some had brought boards for him to sign as well along with Kris Littlejohn. I captured photos of the event which I have posted below. Many thanks to everyone that helped spread the word about the lecture including President of the CSCA Brad Lundstrom and JC MacNeil of the Denver Chess Club. And thanks to everyone who helped setup and clean up afterwards. I know we had some new people show up to our club and I apologize for not getting around to meet everyone." 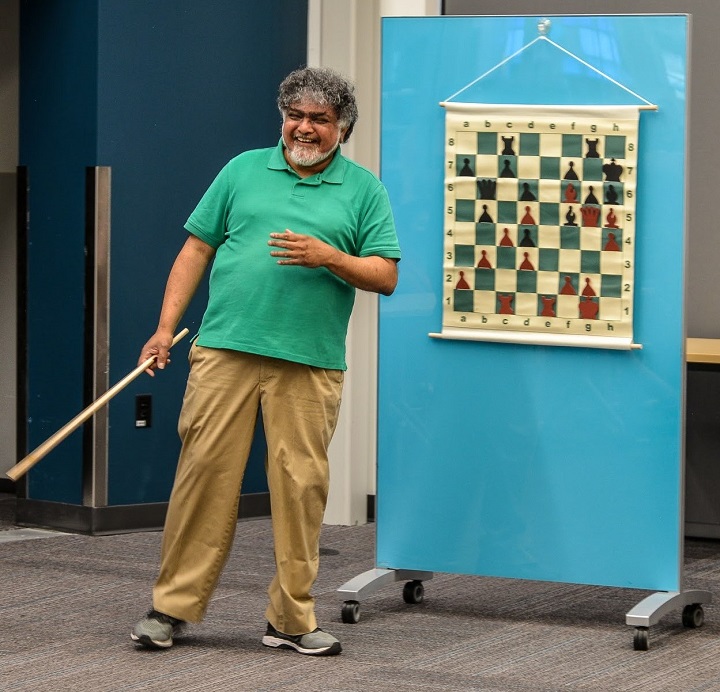 "Feedback so far has been extremely positive and I know Sunil very much enjoyed the experience. With so many in attendance we left a great impression on him and represented Colorado chess very well. Lastly a number of us enjoyed dinner afterwards with Sunil where we enjoyed some fellowship and banter. A great way to end the evening..." Regards, John Brezina https://parkerchessclub.godaddysites.com/  " 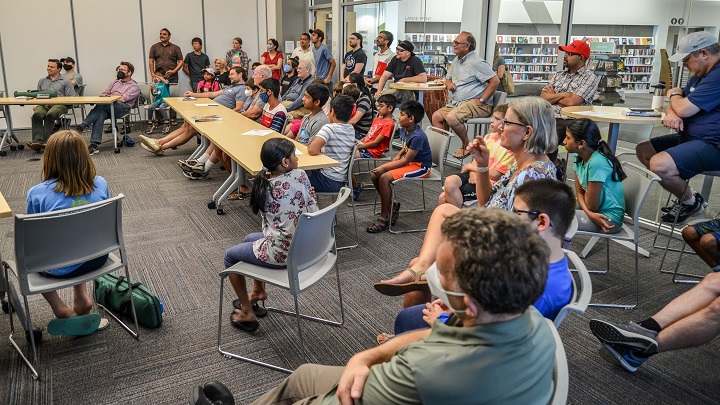 It was indeed a well attended lecture, and a good time was had by all.

Thank you kindly, Mr. Brezina for bringing a world renowned personality to Colorado. And of course, for allowing me the pleasure of captioning your excellent photography of the event. See all photos here. Thanks also to NM Lior Lapid for his contribution to the event.