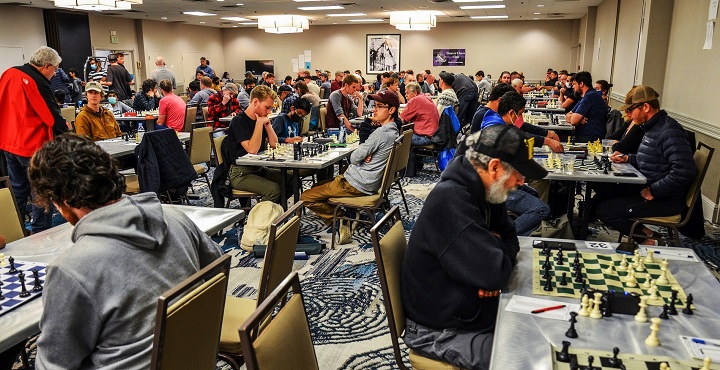 ... and the very few playing disputes were settled quietly, quickly, and without quibble.

I don't think there are enough superlatives in the Oxford English Dictionary to describe what an awesome tournament the DCC 2022 Denver Open was. It may well have been the highest attendance of any chess tournament ever held in Colorado. ONE HUNDRED and EIGHTY EIGHT - yes 188 - players registered to play in the annual premier Denver Chess Club tournament. Note: Tim Brennan has informed me that the Ed Levy I tournament in 2002 had 325 players, and Ed Levy II in 2003 had 261 players. OK so the 2022 Denver Open had the best Colorado tournament attendance in the last 19  years. I will always correct any errors of fact. 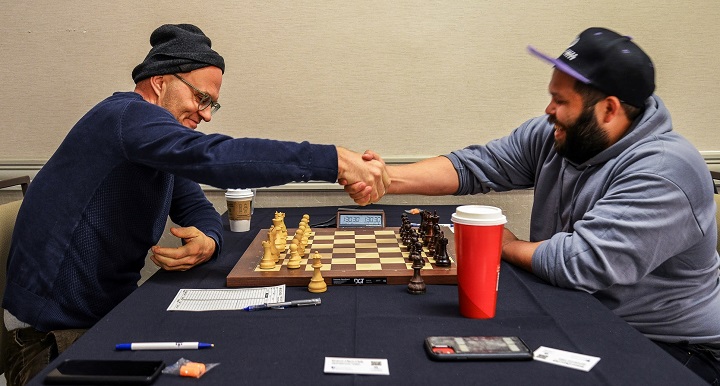 Jesse Lozano from Texas was thrilled to be paired against GM Jesse Kraai for round 2 of the main tournament.

Players from all over the country came to Denver, Colorado to possibly play against special guest GM Jesse Kraai, or to have a shot at winning substantial prize money. An astounding 42% of the players were from outside the Denver area. With four sections it was possible for any player, of any level of ability, to win some big bucks, in addition to the classy 1st place trophy we had for each section. 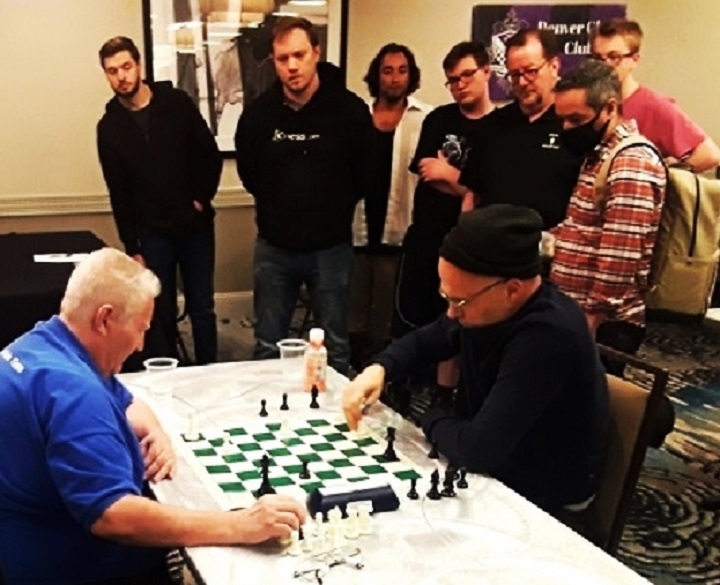 Of course, a crowd has gathered around this Blitz game. NM Brian Wall vs. GM Jesse Kraai

The event opened with a Friday afternoon Blitz tournament that included GM Jesse Kraai's participation. Thirty-seven players choose to play in this 9 round side event. As usual, Andrew Starr directed the tournament with efficiency, despite a faulty hotel WiFi connection. Surprisingly GM Kraai did not take 1st place. The Grandmaster was upset by Sullivan McConnell in round 3. The young Sullivan also won against the well known and strong NM Chris Peterson to finish with 8.5 points - only giving up a draw to his brother Griffin (who now is also a new Colorado Master), This fine performance won Sullivan $200. GM Kraai ended up with 8 points and won $75. I'm sure Sullivan is now on GM Kraai's list :-) I should also mention that relatively low rated Luke Donofrio (1459) must be a great blitz player. He finished with 5.5 points. Only losing to Griffin, NM Wall, and GM Kraai. His final score was all from  big upsets. 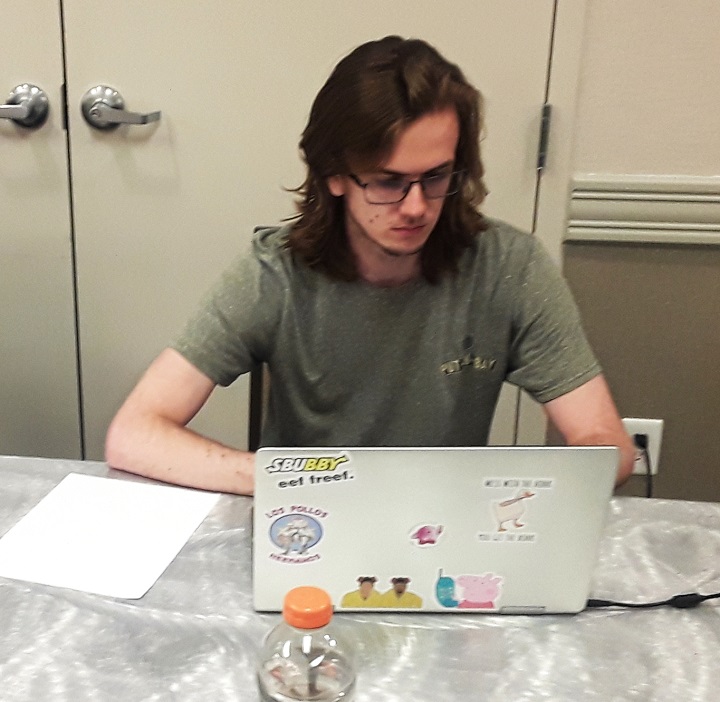 Andrew Starr ran the Blitz tournament with his usual efficiency...

...then Saturday morning wall to wall chess players filled the room for the Main Event.

For me, it was just a great feeling to walk into the tournament room Saturday morning for round 1 of the Main Event, and see wall to wall chess players filling the room. As I am sure it was for DCC President, Richard Shtivelband, and DCC Vice President, Lex Huberts. They put in a lot of time and effort to make this great tournament happen. Thanks very much to both of you. 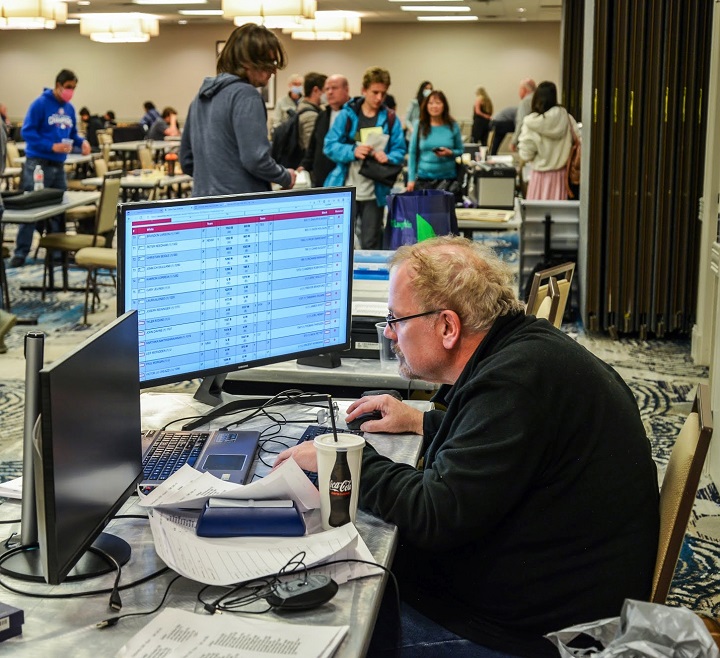 Also, no tournament happens without Tournament Directors. FIDE National Arbiter Tom Nelson and USCF Director Earle Wikle ran the show in exemplary fashion. The rounds started on time, game results were entered correctly, and the very few playing disputes were settled quietly, quickly, and without quibble. That is all that can be asked of TDs. The DCC thanks you both kindly. 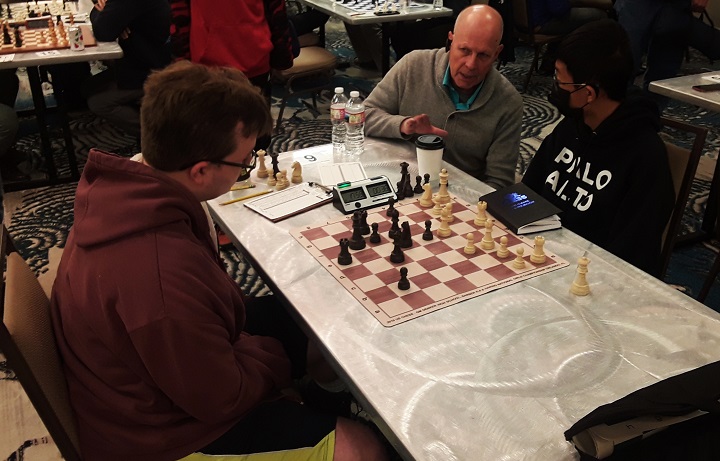 It is no surprise that GM Jesse Kraai took 1st place in the FIDE-rated Champion section (see diagram #1 and #2 below) But I guess it is a little surprising that it was not with a perfect score. Another new Colorado Master, Neil Bhavikatti, held the Grandmaster to a  last round draw. Nevertheless, 4.5 points secured clear 1st place and Mr. Kraai takes home a nice 1000 dollar prize check. 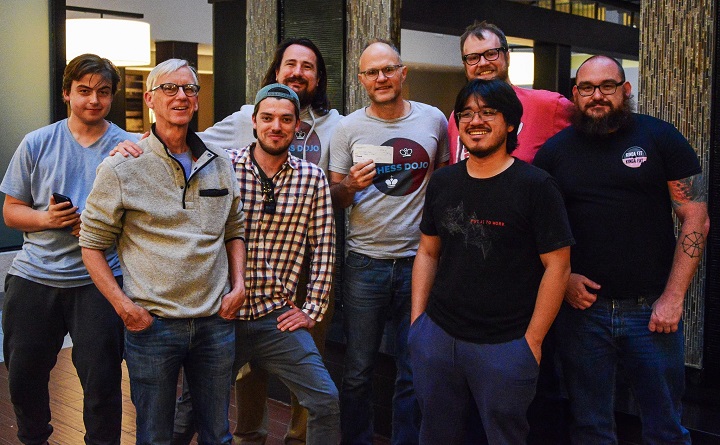 Neil and apparently a real strong Class A  player, Jorge Rubio tied for the combined 2nd and 3rd place prize with 4 points, and they each pocket 625 dollars. The young Bhavikatti's score also includes a draw against the no doubt soon to be an International Master, Gunnar Andersen. Jorge's score was all big upset wins. He only lost to Mr. Andersen. I suspect Mr. Rubio will soon be a USCF Expert. Gunnar won the U2400 prize of 250 dollars with 3.5 points. 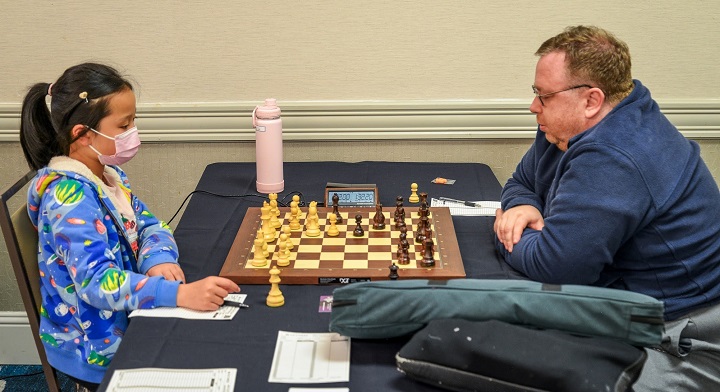 Also, I'd like to mention the young - I'm guessing like 9 years old - Iris Li is going to be a force to be reckoned with. (diagrams #3 and #4) She finished out of the money but had two big upsets. Winning against strong Expert Michael Ginat and winning against NM Richard Shtivelband, who everyone knows is not at all easy to beat. NM Brian Wall managed to win against the youngster, but Brian will testify that Iris gave him all he could handle in their last round battle. Note: Mr. Ginat's current rating is slightly less than 2200 but he has USCF Life Master norms. Also, Brian has told me that he at one time was concurrently both the Colorado state chess and backgammon champion. 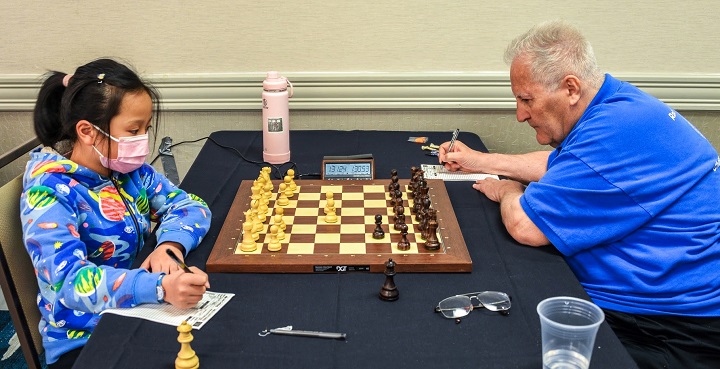 And here Iris is about to give NM Brian Wall all he can handle.

The U2200 section had an unusual 5 way tie for 1st place. Alexander Xie, Orgil Batsaikhan, Dimitry Kishinevsky, Luis DeAvila, and Tyler Mandel all finished with 4 points. They share the combined 1st, 2nd, and 3rd place prize, and each wins 270 dollars. Mr. Mandel is probably the most deserving of the prize money. After a 1st round loss to Christopher Motley, Tyler won 4 in a row against higher rated players. Amongst players finishing with 3.5 points, two young players are notable. Namely, Sikander Baker-Nagar and Harsh Mali. All of Sikander's points were from upsetting much higher rated players, while Harsh had four upsets and only lost to Mr. Xie. 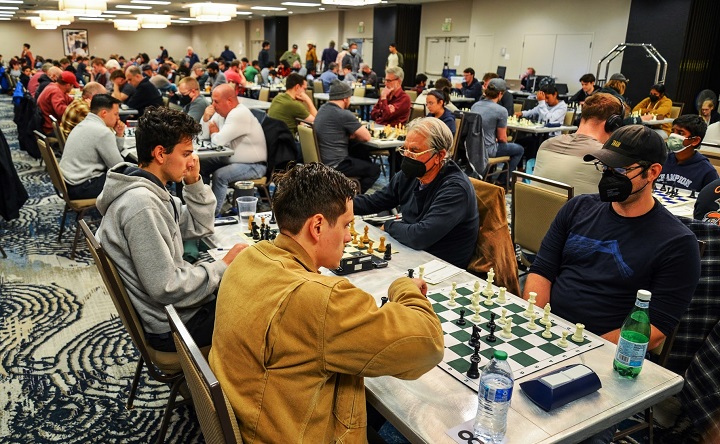 Players mentioned above may be in this picture somewhere.

The U1800 section was won by Kristopher Zelkin with a perfect score. No losses, no draws. Set 'em up and mow 'em down, and win 450 dollars. Mr. Zelkin is also the DCC Tuesday night U1900 Championship winner. 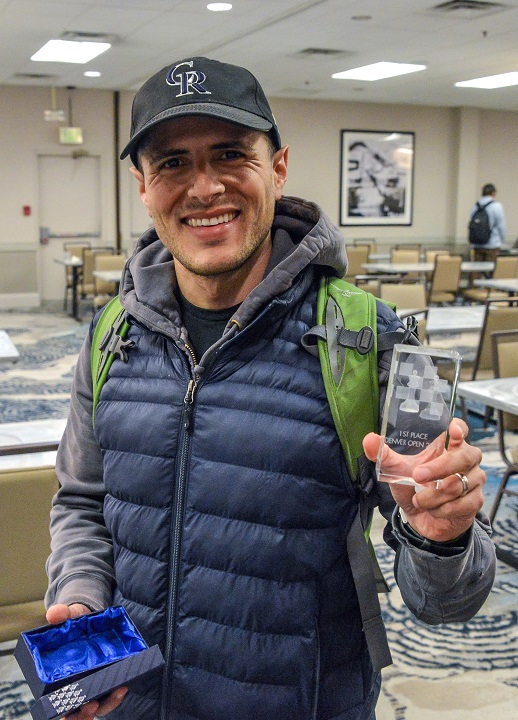 Mr. Zelkin now has another trophy to go with his Tuesday night Champion trophy

Photographer extraordinaire, John Brezina took the 2nd place prize of 350 dollars with four wins and a half point 4th round bye. Six players tied for 3rd place: Matthew  O'Malley, Jeff Nohrden, Luis Jimenez, Coen Beaver, Amitai Sebba, and Derek Yin. They all ended up with 4 points, and each won 33 dollars and 33 cents. The young grade school age Derek completely outplayed me in a Knight and pawn ending and made it look easy. It is of some consolation that he also upset the strong Srikar Appana. There were numerous upsets in this section. Notably Tanya Prabhu, Shubh Misra, along with many others. 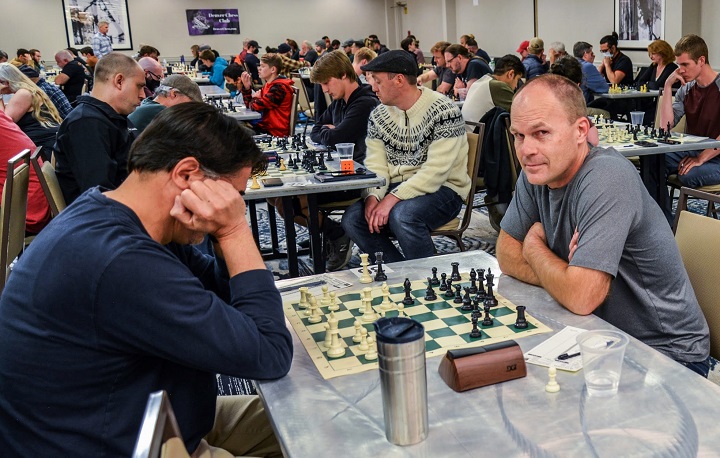 Photographer extraordinaire John Brezina has handed someone his camera. He is playing Black against Jeff Nohrden.

Also, in the U1400 section, we had a perfect 5-0 winner. Unrated Paul Morgan won 250 dollars for his fine play against more experienced players. The 2nd and 3rd place prize was shared by Kamron Correia and Andrew Robichaud. They each won 125 dollars. I'm glad to see Mr. Robichaud (diagrams #9 thru #12) winning some money and not letting won games slip away. Chad August had two over 500 point rating difference upset wins. James Manning, Trevor Thieszen, Christian Seidel, and Mitchell Keller also had huge upsets. Once again the upset wins and draws show that it's always best to play the position and not the opponents rating. 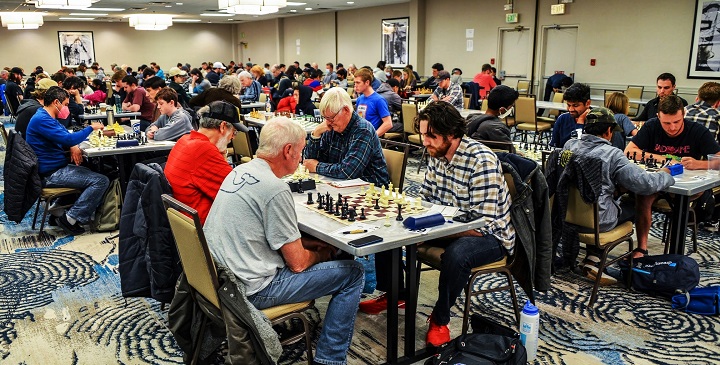 And again, players mentioned above may be in this picture somewhere. What can I say other than I got to use another room shot. :-)

Congratulations to all the prize winners, and a big THANK YOU to all 188 players who made the 2022 DCC Denver Open extraordinary. Also, many thanks to John Brezina for the photos used in this report. Note: Other than the two blitz pictures and the Tom Nelson photo, all pictures are by Mr. Brezina. To round out this report, here are a few more of his great pictures from the tournament. 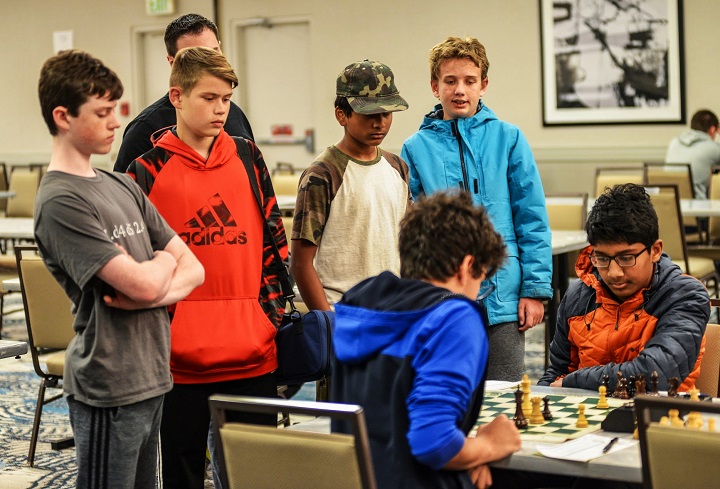 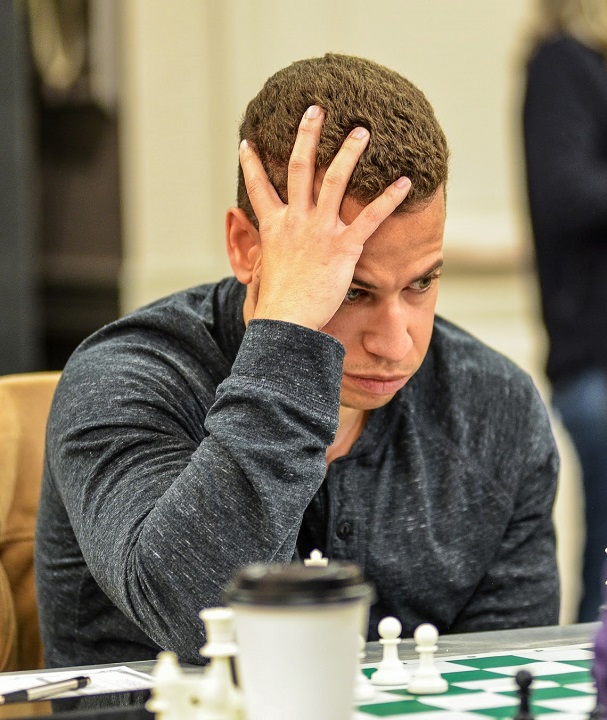 Antony Brown is maybe not liking his position. Mr. Brown went on to have a good tournament. Finishing with a not at all bad 3 points. This gentleman is obviously quite happy to be at the 2022 Denver Open. 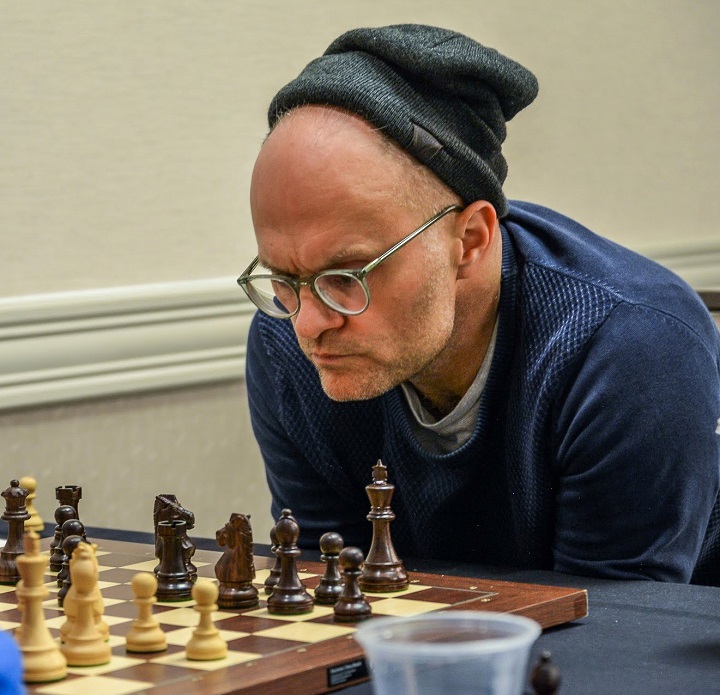 GM Jesse Kraai is totally focused on the board. When playing Brian Wall every move matters. 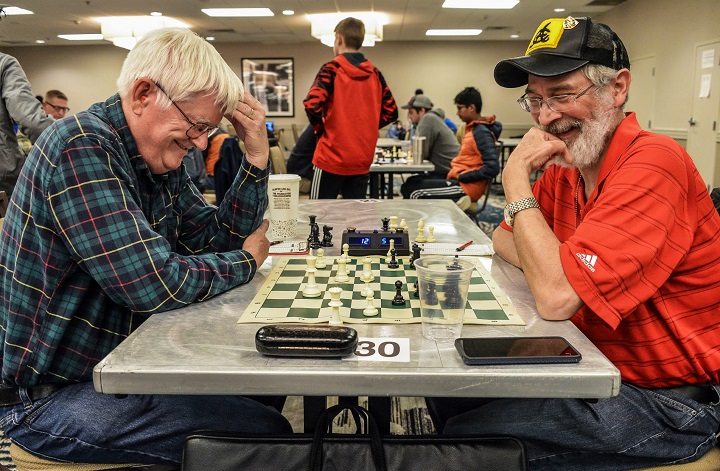 Dean Brown and Ricardo Bogaert having a good laugh. Or maybe playing a game where they are not allowed to use either back rank ;-) 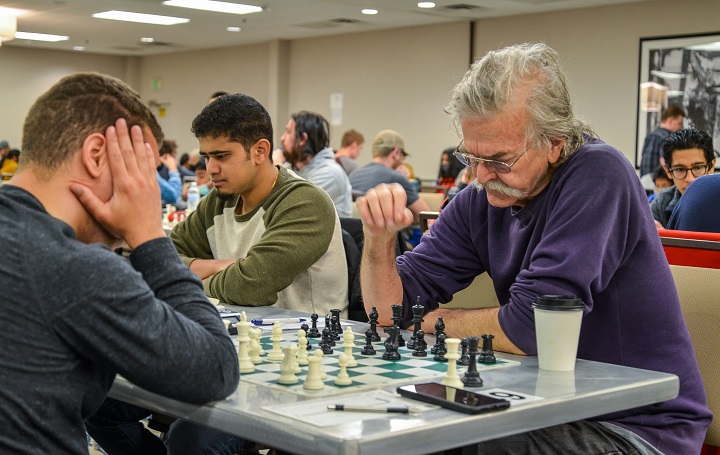 Yours truly no doubt about to make a bad move. 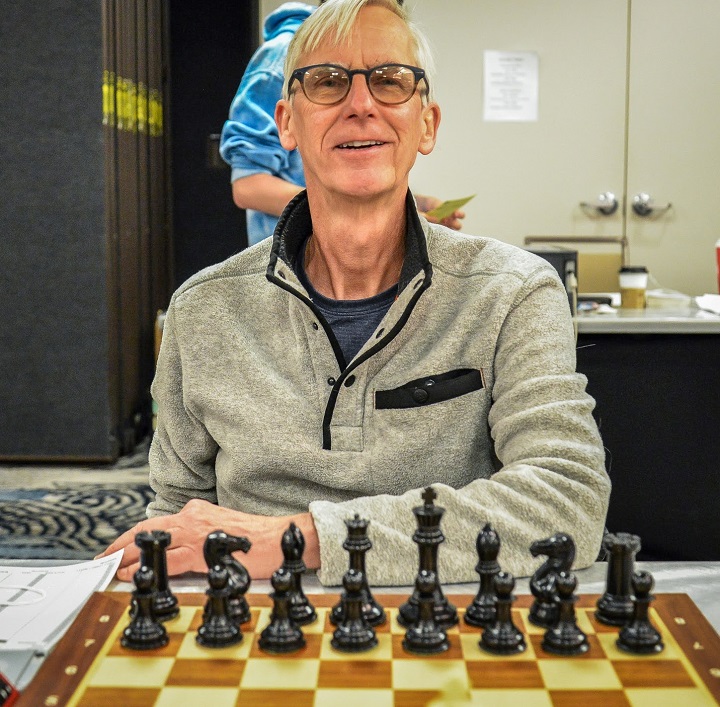 1) Gunnar Andersen vs. GM Jesse Kraai. Round 4. Rather than move the twice attacked Knight on b4, GM Kraai begins what I thought was a terrific mating attack. What would you play in this position? No fair looking at the following picture ;-) 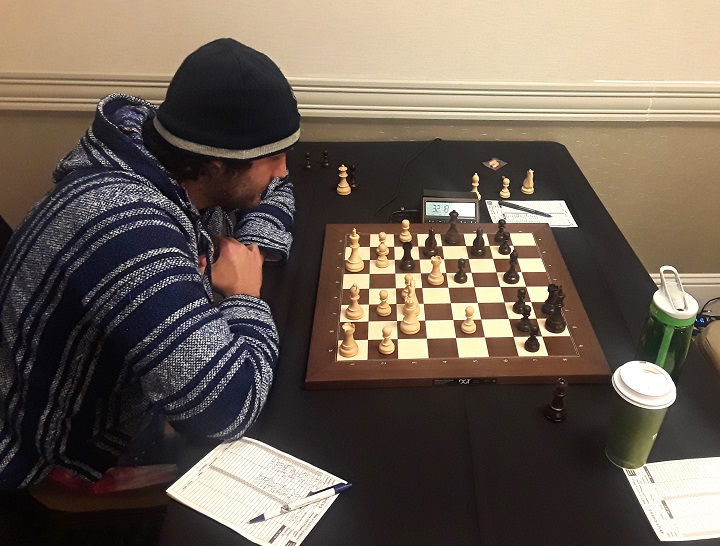 2) Brian Wall vs. GM Jesse Kraai. Round 3. NM Wall answered 21...Nb4 with 22. Nxd4. Previously I had called this a mistake because it dropped an exchange. Brian explained to me that the exchange sacrifice was positionally sound, and he had played it intentionally.  NM Wall had also fearlessly opened the game with 1. Na3 remembering that 34 years ago he beat a teenage Jesse Kraai with the same opening move !! 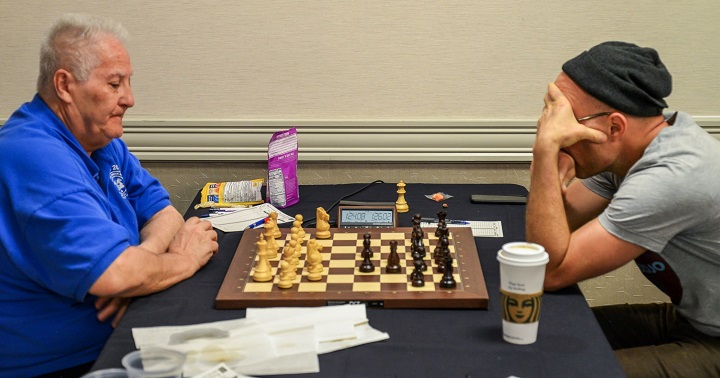 2a) the same game In this position after 40...Rd8-c8 and still down the exchange the computer agrees as Brian says, "It's a draw...My position is impregnable. Total lock on the dark squares." NM Wall then says "I made the first time control but from the stress, I suddenly decided to go for a win and alter the structure." What move does Brian play in this position? Which he later regrets by saying "Don't change the structure unless you are very, very sure that's what you want to do" A lesson for us all. Still, you have to admire the fearless Brian Wall attitude while facing a Grandmaster.

3) Iris Li vs. Brian Wall. Round 5. Do you see the trap that NM Wall has set by spending more than 15 minutes to find 33... Rc8xc5 capturing a Bishop and apparently sacking an exchange? Brian makes an amusing yet accurate comment about playing the youngster: Quoting Mr. Wall, "Such a strange spectacle, to see this human Puzzle Rush bouncing up and down in her chair, using all her time, setting one trap after another relentlessly."

4) Iris Li vs. Richard Shtivelband. Round 3. Final position. NM Shtivelband has just captured a Rook with 43...Rf3xe3 and realized he had to resign. Note: Alternative moves given within this game are by Brian Wall.

5) Jeff Baffo vs. Tyler Thieszen Round 5. I believe Mr. Baffo got lucky in this position. After 34. Nf6+, Black has two moves to get out of check. Which one would you choose? 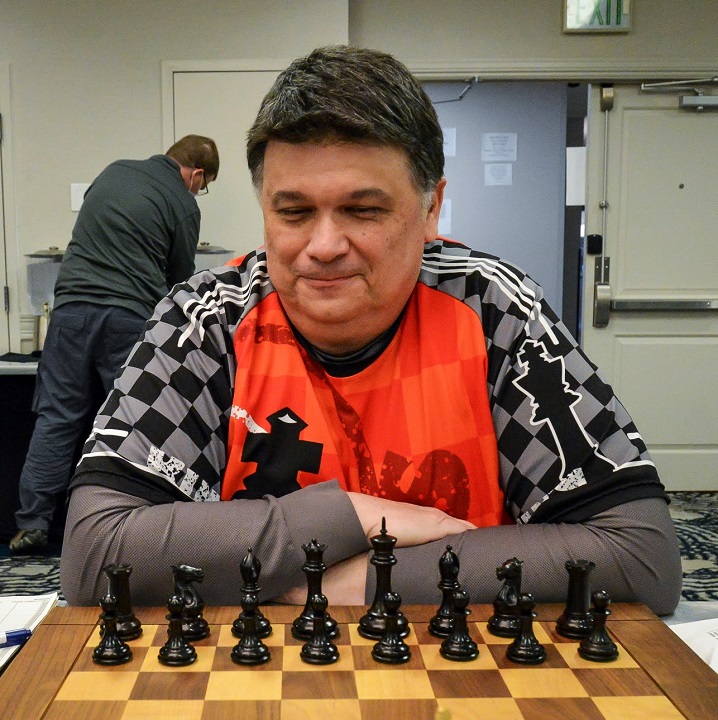 Jeff Baffo is ready to play, and as it's said; good players are always lucky.

7) Trevor Bradford vs. Petra Lambert-Gorwyn Round 1. White's last move was18. Rad1. Find the winning move that Black played, but unfortunately then - as so often happens to all of us - let the big advantage slip away and the opposing player won anyway.

8) Karthika Sakthisaravana vs. Chad August. Round 4. After 14... Qe5xh2 Find the move that wins the Queen or mates in 4.

9) Andrew Robichaud vs. Quinsen Joel. Round 1. Black has been careless with his material and here compounds the errors with 22...Qc7xd6. Why did that not help?

11) Laura Alonso vs. Andrew Robichaud. Round 4. White had some chance of drawing the game, but here slipped with 34. Kf3-e4. Why was that not the best move?

12) Andrew Robichaud vs. Brandon Larson. Round 5. After 20...gxf5, find the sweet move that wins more material and essentially forces Black to resign. Thanks to Mr. Robichaud for uploading all his games to DCC Games. 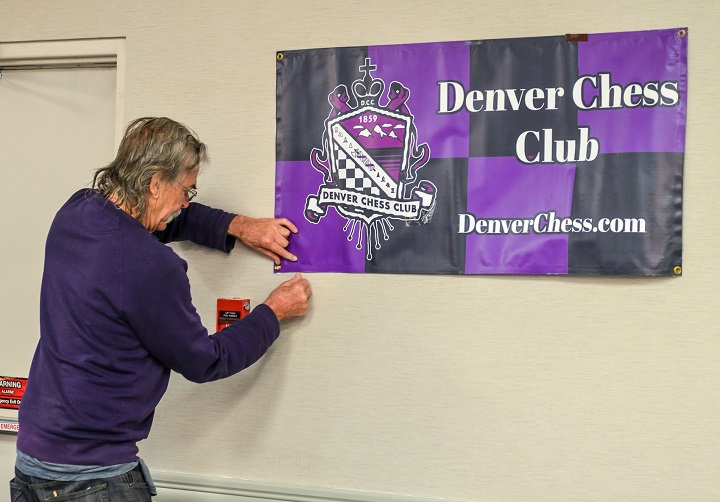 Tireless promotion of the Denver Chess Club and trying to get the tape to stick to the wall :-)