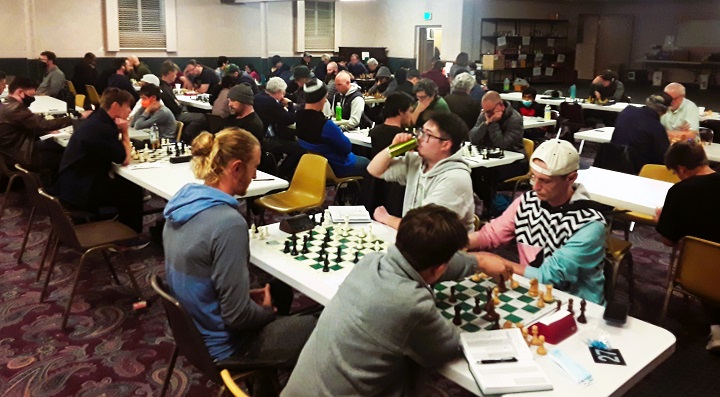 ... players who are making the DCC one of the best chess clubs anywhere.

This month is special for all Colorado chess players. I'm sure we all remember the 2019 Denver Open where the DCC staged the biggest and best open chess tournament ever in Colorado. This year we would really like to see a record attendance of 190 players, from all across the country here in Denver, Colorado over the May 20-22 weekend. Warm up Friday afternoon with a Blitz tournament, then enjoy the 5 round main tournament over the weekend. GM Jesse Kraai, the 2019 Denver Open Champion, and WGM Sabrina Foisor, the 2017 US Women's Champion, will be in attendance. We of course are hoping to attract more star players between now and then. Tell all your friends :-) 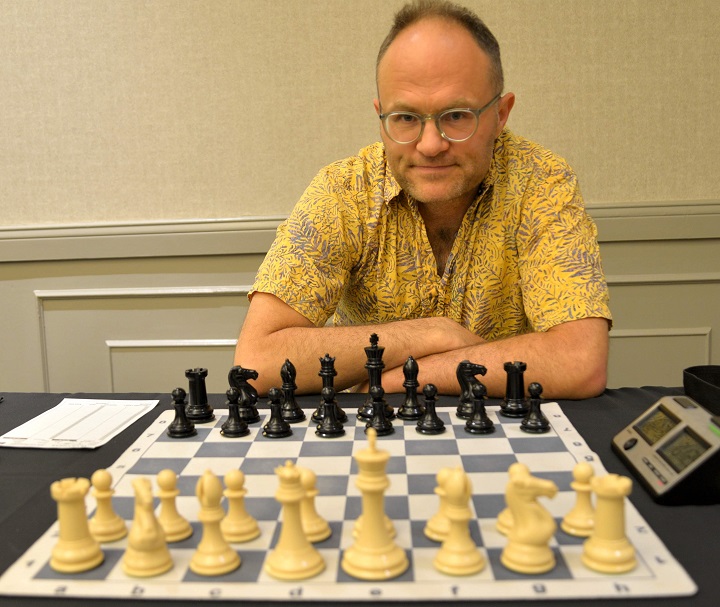 GM Jesse Kraai will be returning for the 2022 Denver Open... 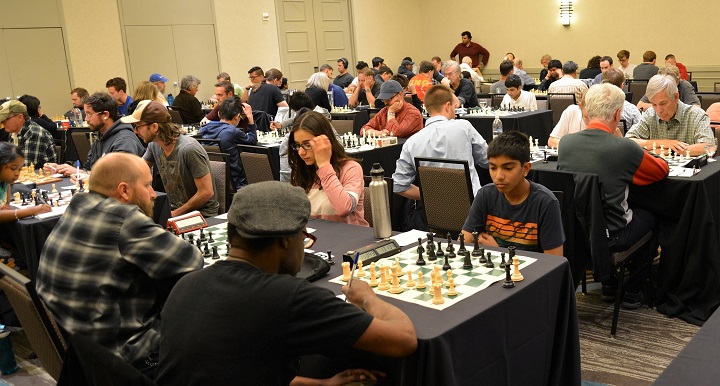 ...and hopefully, all these folks along with many more.

Speaking of attendance, the DCC monthly Tuesday night participation continues to be outstanding. Clearly the interest in chess is rising, whether from the Queen's Gambit movie or just Americans finally realizing what the rest of the world has always known. 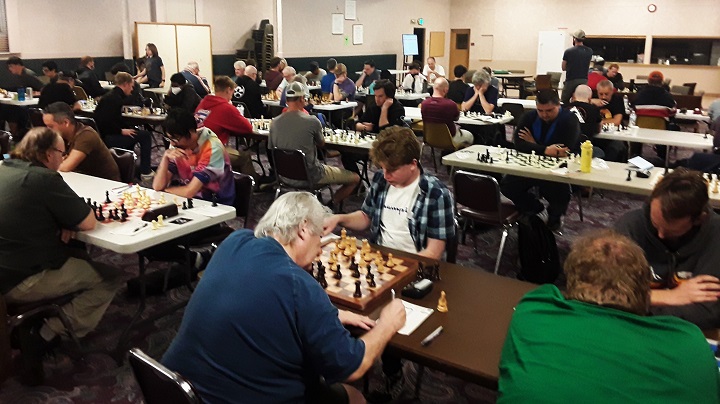 I know I use too many DCC Tuesday might room shots, but I remember how it used to be and this is how it is now. So I can't help myself.

Chess is an intellectually stimulating sport that is able to be played by anyone who can think. Some physical fitness is helpful just to be able to endure the stress of an intense game against an opponent you really want to beat. A physical disability matters not in the least. Chess is a brain game, and all that is necessary to play and enjoy the sport is mental acumen and stamina. That said, before getting to the winners of the DCC April tournament let me present the DCC 2022 Championship trophy winners from each section. 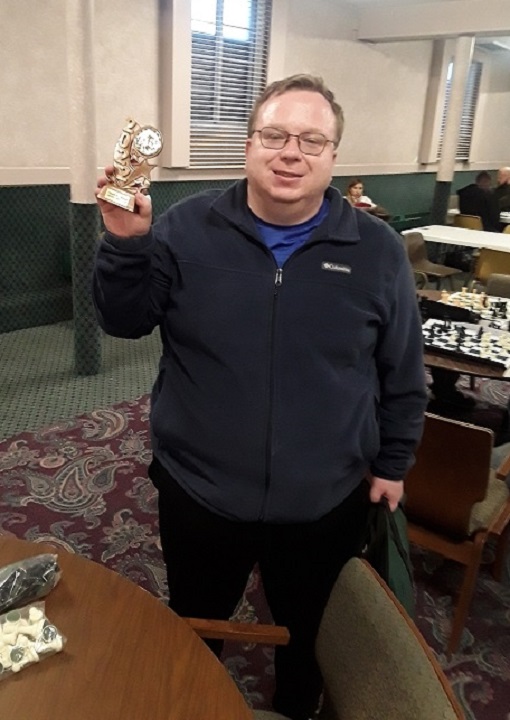 U1900 Section Champion, Kristopher Zelkin. with an expression that says, "hey,look what I won"... 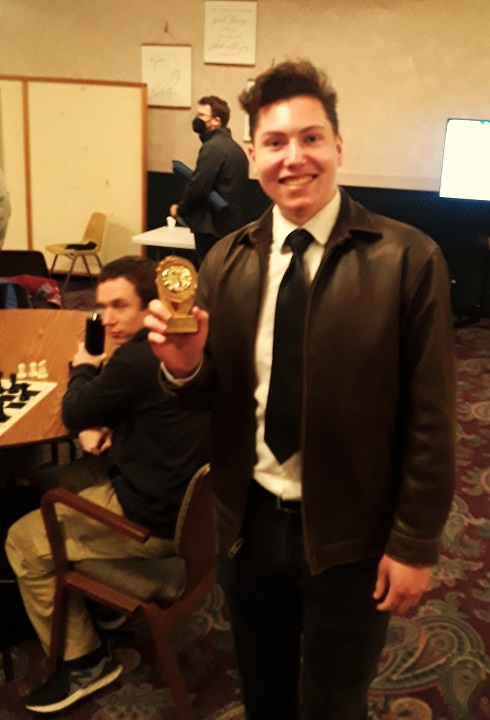 Congratulations to the DCC Champions. Now on to who won what in April. In the Premier section it is of no surprise that Richard Shtivelband (see diagram #5 below) has taken 1st place with a perfect score again, and again won a nice chunk of cash. To the tune of $208.20. Gunnar Andersen, where are you? Richard needs something to worry about other than Brian Wall returning to form. It could be that NM Shtivelband will be an unexpected surprise for GM Jesse Kraai and WGM Sabina Foiser in the upcoming 2022 Denver Open. 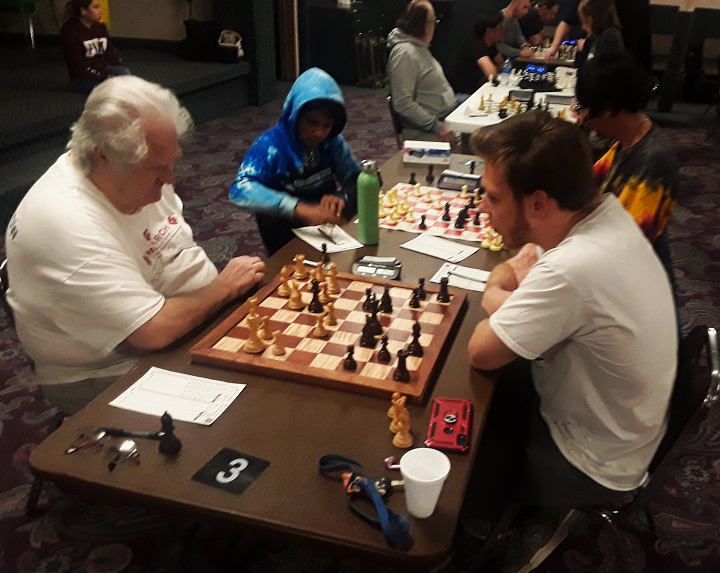 The combined 2nd and 3rd place prize of $208.20 was shared by Brian Wall (diagrams #4, 8, 12, 20) Cory Kohler, and Christopher Motley, who all finished with 3 points  NM Wall again suffered an upset loss to the clearly under rated Craig Moffit. Cory was upset by the fast rising Owen Christ, and Chris only lost to NM Shtivelband. They each take home $69.40. 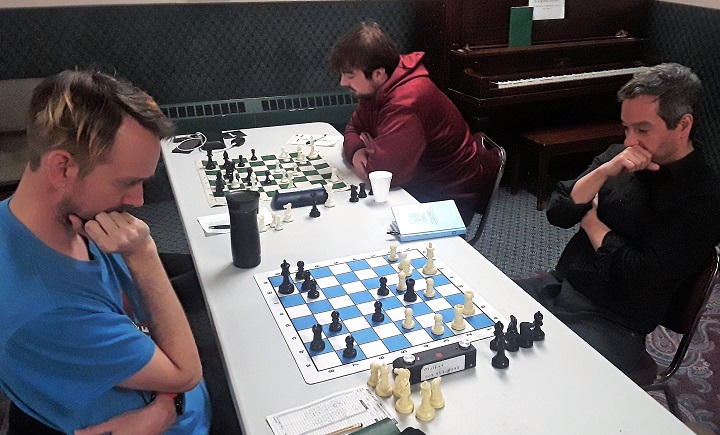 Craig Moffit with the black pieces against Turpana Molina. (diagram #2,6,9,19) Christopher Motely on the other board.

The $20.00 Premier Upset prize was won by Mr. Moffit for his big win against you know who. I'm sure Mr. Wall will not take Craig lightly next time that play.  In the U1900 section I am happy to see Phil Brown take 1st place with a 4-0 score and win $201.78, even though I am a much better player than Mr. Brown. Phil and others may question the truth of that statement :-) 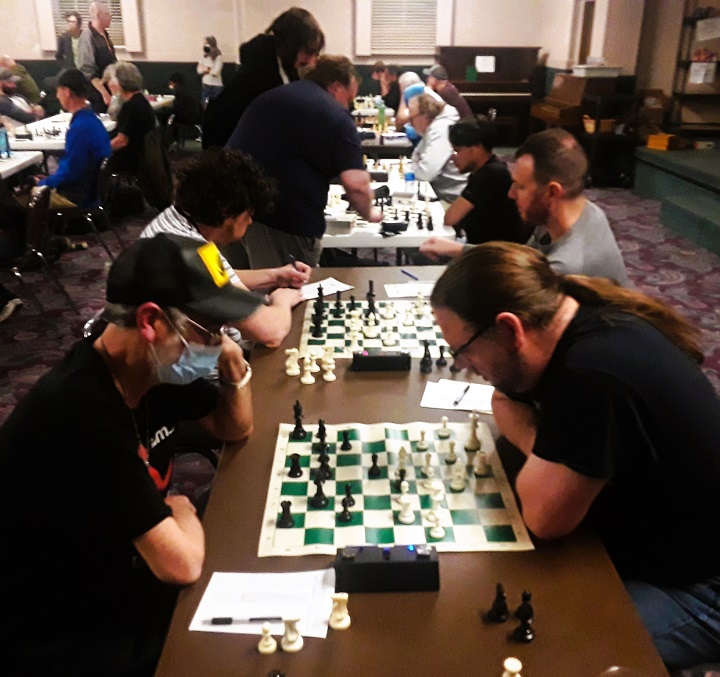 Ricardo Bogaert with the Black pieces against Phil Brown. (diagram #11, 14, 14a)

Mr Brown's fine play included a nice round 3 upset win against the strong Ricardo Bogaert. Jeff Nohrden took clear 2nd place with 3.5 points. Giving up a 1st round draw to lower rated Justin Moss, then winning three in a row to win $121.07. There was a big 7-way tie for 3rd place. Mr. Bogaert, Kristopher Zelkin, Luis Jiminez, Drew Tuck, Michael Igoe, Abhiram Palle, and Turner Browne all tied for 3rd place with 3 points and they each won lunch money. If $11.53 will still buy lunch :)  The $20.00 U1900 Upset prize was won by Ethan Privette for his last round win against long time DCC player Bill O'Neil, who I know is not at all easy to beat. 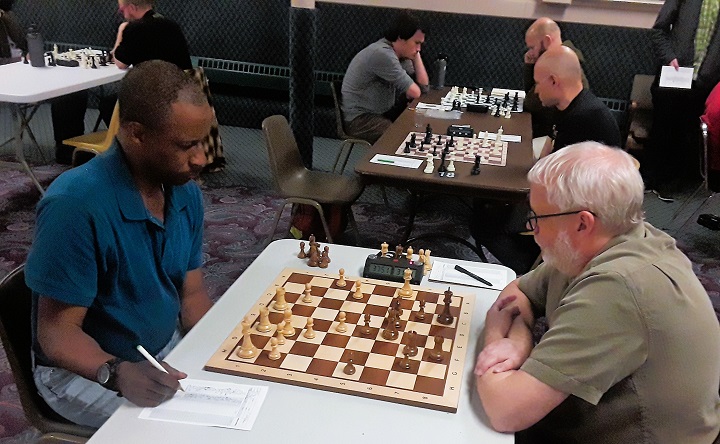 About to record his move, Bill O'Neil is on his way to winning against DCC Tournament Director and tech wizard, Brian Ledsworth.

Other notable Upsets in this section were: Lev Shulman over Tyler Mandel -Phineas Hagg winning against Ken Doykos and a rusty Ann Davies -  Abhiram Palle also had an upset win over Mr. Doykos. I'll just say Phineas and Abhiram better look out next time they play Mr. Doykos :-) 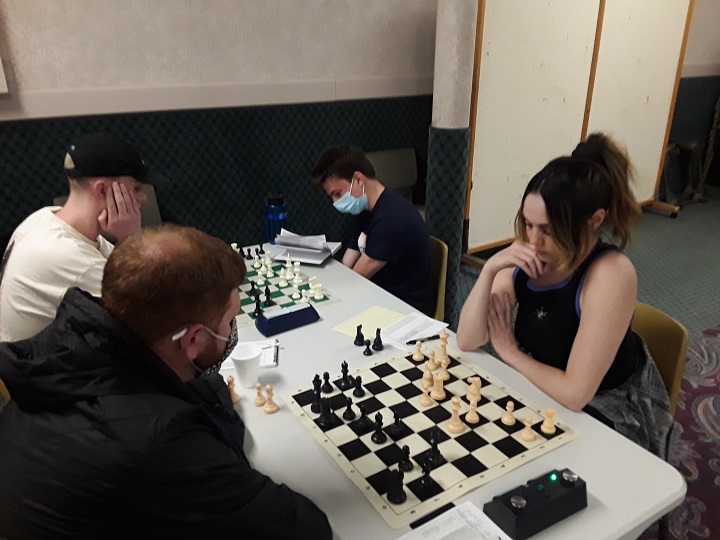 Michael Melcher playing Black against Aaron Elliot. In the black hat, Seth Fortinsky is playing Devyn Wolcott. Note: It is quite possible that I am misidentifying these players.

The U1500 section featured an unusual 3-way tie for 1st place. Michael Melcher, Seth Fortinsky (diagram #7,13,18) and Paul Morgan all ended up with 3.5 points. They each win $132.52. Mr. Fortinsky can be the most pleased since he had two big upset wins in his score. Winning against the much higher rated Joe Beane and Ian Moffit in rounds 2 and 3. The $20.00 U1500 Upset prize was won by Justin Moss Jr. who I'm guessing is the son of U1900 player, Justin Moss. Ian Moffit is the son of Premier player Craig Moffit. Also having nice upset wins were: Aaron Elliot, Eziekiel Meeker, Dan Nolan, Johnny Tucker, and Madeline Finch. Madeline is training to be a Tuesday night TD. Thank you kindly, Madeline. It's always good to have back up TD's. 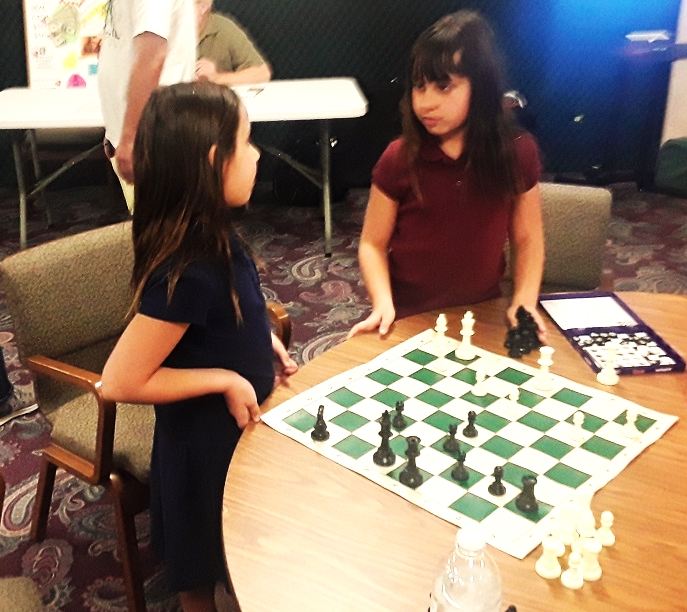 It's always good to see kids at the DCC and know they have an interest in chess. Most likely... 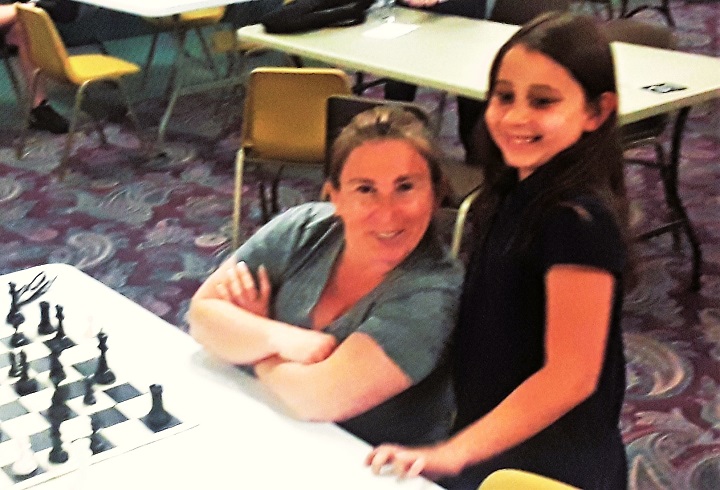 Congratulations to all the prize winners and thanks to all the new and old DCC Tuesday night players who are making the DCC one of the best chess clubs anywhere.

We have an excellent Games Section thanks to Sikander Baker-Nagar, who is diligently uploading games to DCC games. Wading through always nearly illegible carbon copy score sheets is time consuming and difficult.

1) Charles Minsky vs. Marc Carlamunt. Round 1. After 43. e6, would you sac the Knight for two pawns or move the Queen? I'd be tempted to choose the wrong way too. Could be why chess is so hard :-)

5) Lex Huberts vs. Richard Shtivelband Round 1. After 33. Rbb2 How does the DCC President force the DCC Vice President to resign.

6) Turpana Molina vs. Ted Doykos Round 2. Final position. A well played game. White methodically picked off pawns and made continuous threats to the Black King.

8) Craig Moffit vs. Brian Wall. Round 2. After 37. Kg5-h6, escaping the Queen check. Find the move that forces NM Wall to resign. To be fair, I should mention that Brian was also playing a simultaneous game against Vedant Margle, while Craig was piling on the pressure. Vedant Margle vs. Brian Wall

9) Turpana Molina vs. Craig Moffit. Round 3. An interesting Rook Pawn ending arose in this game. After 30... Ra3-a1, rather than 31. Ra5 what would have been a much better move?

10) Lev Shulman vs. Robson Glasscock Round 3. Final position. A game that lends credence to the old adage, "all rook and pawn endings are draws" :-)

13) Seth Fortinsky vs. Ian Moffit. Round 3. After 29... f6 Observe how White goes about picking off the Black pawns to win.

17) Andrew Robichard vs. Nick Pettet. Round 4. In this position Black played 19...Rad8. What did Mr. Pettet overlook?

20) Owen Christ vs. Brian Wall. Round 4. We all know there are many well known moves for Black in this position, but what move does Mr. Wall play that results in these comments. "I had to really restrain myself from making a Troll face." - Will Wolf. "Hilarious."- Gunnar Andersen. "Christ died for your opening sins."- Tim Brennan. Brian did manage to go on and win the game. Oddly enough it was at move 38, when Qwen - in a nearly equal position - overlooked that his Queen was hanging on h5 :-)

Thanks again to all, and thanks again Sikander for the time and effort you put into uploading these games.