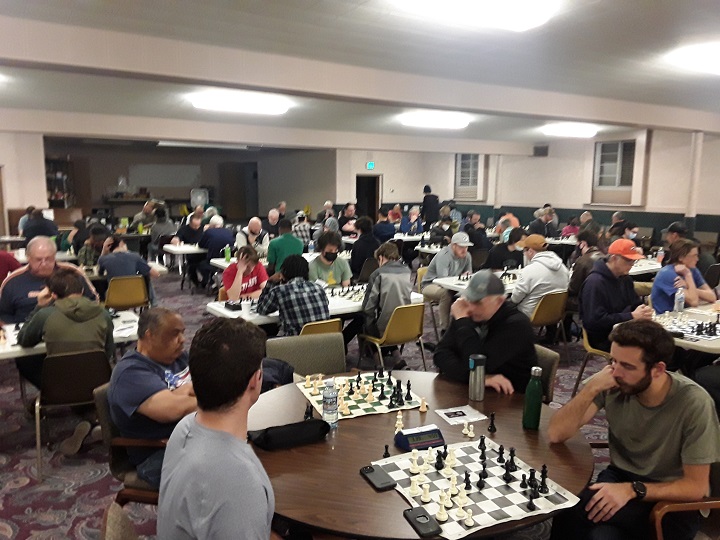 Before getting to the annual DCC Tuesday Night Championship tournament - which is typically held in the first month of each year that has five Tuesdays. - I'll provide a brief summary of the DCC March Rapid tournament, which was organized by Andrew Eskenazi and Andrew Starr. 55 players signed up for a fun and exciting 10 round rapid time control tournament.  As usual with Mr. Starr directing, the rounds started on time and players were not grumbling about delays between rounds. Mr. Eskenazi, at his own expense, provided snacks and beverages for the players to enjoy throughout the day.

I imagine that by now players are getting used to seeing NM Richard Shtivelband's name at the top of the final standings list. Losing only one game to Brian Wall, Richard finished in clear 1st place with 9 points and won 315 dollars. Not bad money for a day's work I'd say. Sharing the combined 2nd and 3rd place prize was Sullivan McConnell and Mr. Wall, both National Masters. They ended up with 8.5 points and each won $197.50. 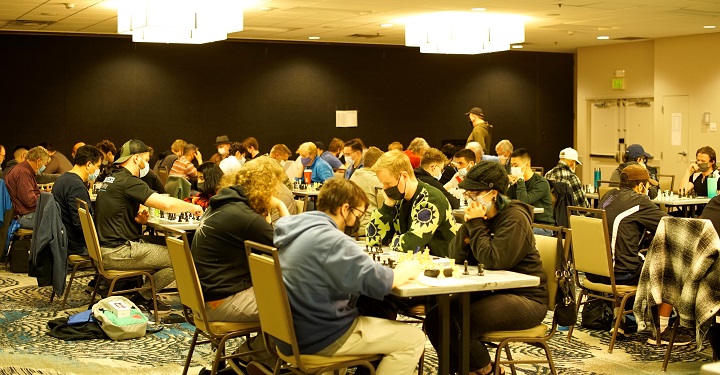 The heading photo is a typical Tuesday night crowd. This photo by Emilee Blakely is the DCC March Rapid tournament

Due to it being a one section tournament there were also 1st and 2nd place prizes awarded to U1600 players. Turpana Molina and Jeff Nohrden are both new to Colorado chess, and clearly their USCF ratings have not caught up with their chess playing ability yet. Mr. Molina won $135 with a 7 point score, and Mr. Nohrden took home $97.50 with 6.5 points. An excellent prize payout for a one day DCC event !!

Jeff Baffo is a long time Colorado chess tournament player. His high opinion of DCC tournaments is valued and appreciated. The following is what he had to say about the DCC March Rapid tournament. Quoting Jeff Baffo:

"This was a 10 round event with the rapid time control of game in 12, .3 delay. I would have preferred game in 10 with a 3 second increment, but the delay feature is beloved by Tournament Directors for it's ability to keep games shorter and more tightly on schedule. There are frequently constraints imposed by the physical location. Hotels, Schools, etc will want you out of the room at a certain time. Say La Gar (Paris lingo for you). In any case, I had a blast. 10 rapid games with only small breaks between games, and a brusque lunch break made for an exhausting day. But a very good exhausting day, giving your all doing a difficult thing that you love. Can I get an Amen?

My hands were shaking and I felt light headed after some of my games. I finished with 6 wins, 1 draw, and 3 losses. Always fascinates me how any non-bye game can end in a draw at these fast time controls. In my case, it was my opponent's fault! He whipped a thunderous Rook sac at my King and had to settle for a perpetual check when he realized he was down to 3 seconds. My losses were all to the Master's/top finishers and I have no complaints, they beat me like an Amoeba, and I deserved my single-cell classification. Cool bonus for us patzers; there were healthy snacks provided, gratis! Energy drinks, nanners, oranges, sparkling water, etc. Very nice." 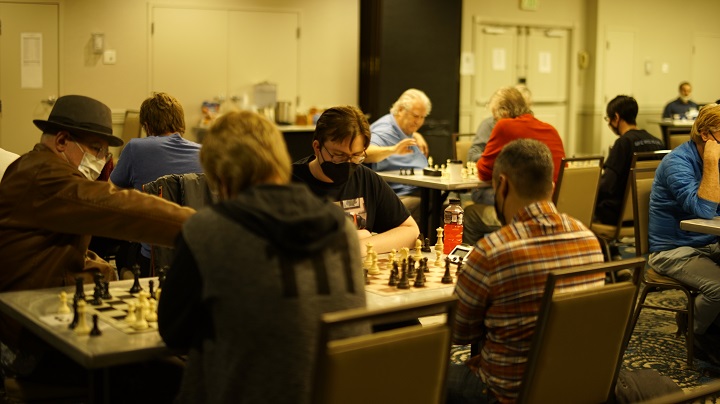 Brian wall in the background wearing a blue shirt is about to make a move. Photo credit: Emilee Blakely.

"As I put in an email to thank the organizers, having snacks at a tourney is like with the cheese or pepper grinder dude or lady-dude comes to your table at Olive Garden. One unpleasant incident was that some phat guy pitched a hissy fit at the start of the tournament because he didn't like the COVID face-diapers. Boo-Hoo. If the DCC deigns that we wear masks even when the whole rest of the World has unmasked, so be it! The ay-hole finally sat down and shut up. Praise God. The games were typical rapid play specimens, but still there were some pretty cool tactics. I'm trying to reconstruct my games but that's going to take a while. Keeping score was impossible for me, but some people still tried. All in all, got to give the DCC another "A+" grade!" Thank you kindly once again Mr. Baffo. 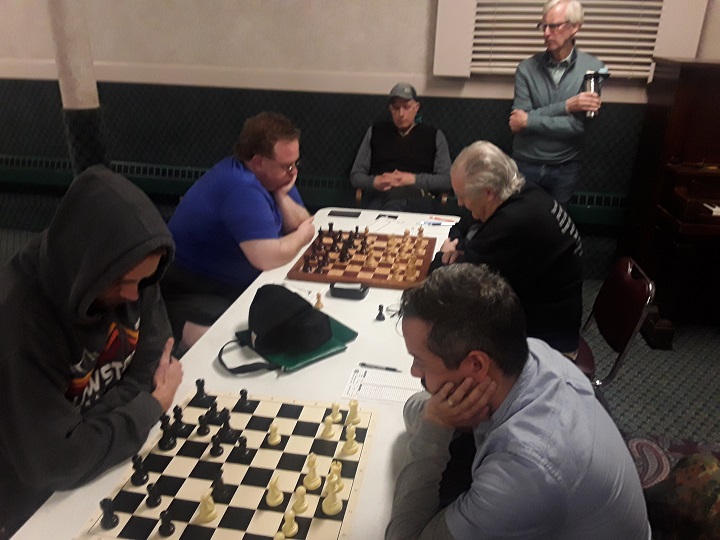 And now on to the DCC 2022 Tuesday Night Championship Tournament report. Is it a surprise to anyone that Richard Shtivelband is the Premier section Champion? After giving up a 1st round draw to Craig Moffit, Mr. Shtivelband won four in a row to claim the Championship trophy and pocket $224.43 Proving that he belongs in the Premier section, Mr. Moffit may have equaled Richard's score if he had not had to take a round 4 bye. Still he ended up with 4 points and won the 2nd place prize of $134.66. (See diagrams #1thru #7 below),  Turpana Molina's 3 point score included two big upset wins and he took home the $89.77 3rd place prize. (diagrams #8, #9, #10) The $20.00 Premier Upset prize was won by the young Harsh Mali for his 1st round 731 point rating difference win against Juan Brenes. Harsh also had a big upset win in round 4 against the DCC Vice President, Lex Huberts. 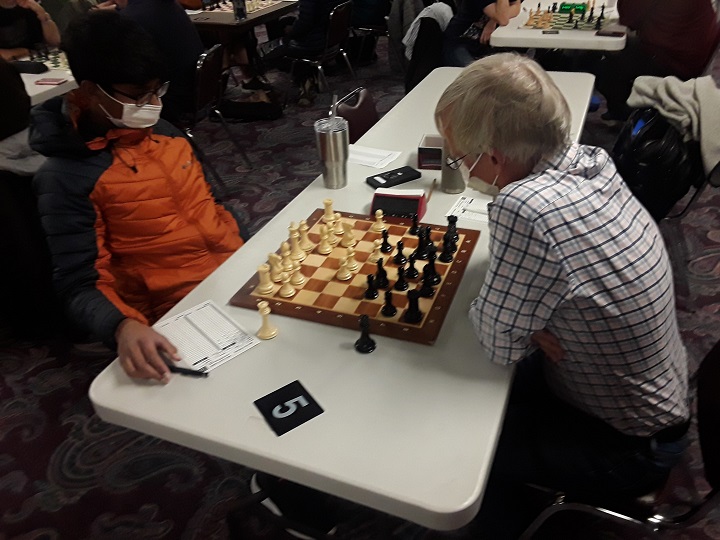 Harsh Mali with the White pieces against Lex Huberts

The U1900 section Champion is Kristopher Zelkin, who played like NM Shtivelband. Mr. Zelkin allowed a 1st round draw then won four in a row to finish with 4.5 points to claim the U1900 trophy and win $217.54. Unrated Palmer Wong took clear 2nd place with 4 points that included wins against the strong players, Phil Brown, Randolph Schine, and in the last round, Ken Doykos. This fine performance earns Mr. Wong $130.52.

The U1900 3rd place prize was shared by Ricardo Bogaert, Grayson Manuel, Charie Flaxbeard, and Aaron Zimmerman. All ended up with 3.5 points and they each won $21.75. The $20.00 U1900 Upset prize was won by Archer Maurane for his last round 334 point upset win against Tyler Mandel. Archer also had a 302 point upset win over Joe Beane in round 3. All three of Caleb Pena wins were Upset wins. DCC Tournament Director Brian Ledsworth held the 1st place winner to an upset draw in round 1 and also had upset wins against the much higher rated players, Bill O'Neil and Roger Redmond.

The U1500 Champion is Unrated Barrett Altman. With a 1st round bye and a round 4 draw, Mr Altman finished with 4 points to take clear 1st place and win $217.54. Justin Moss and Alex Sottile scored 3.5 points and they share the combined 2nd and 3rd place prize of $217.54. Patrick Kubanyi wins the $20.00 U1500 Upset prize for his big 621 point last round win against the strong and experienced Mark Fischer. 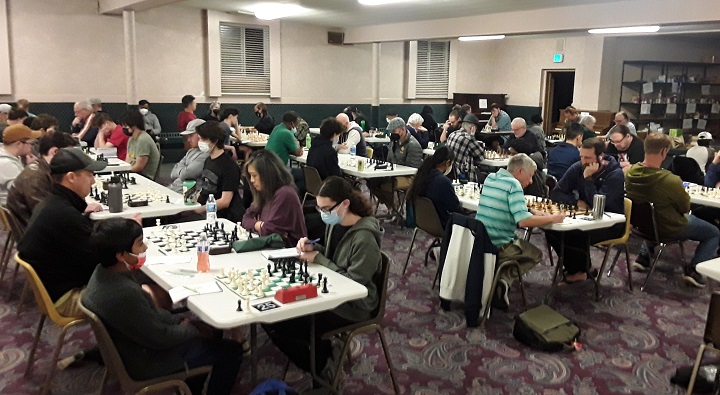 It's not just old men playing chess at the DCC anymore.

It is good to see Mr. Fischer back at the DCC. Its also good to continue to see new players showing up every week. Once again over 100 players played at least one game this month. If only we could attract more higher rated players for the Premier section, I wouldn't have anything to complain about :-) Congratulations to all the prize winners. Also let me mention that the DCC intends to start having a Tuesday night chess related lecture at least once a month. The April 5th lecture will be from 6:15 to 7:00 PM and will be presented by Brian Wall. Titled "Why must I lose to this idiot." This promises to be entertaining lecture :-)

I like to feature Brian Wall's games in the Games Section because of all he has done for Colorado chess and the DCC since the dawn of time :-) Griffin McConnell and Neil Bhavikatti are the latest in a long line of young players that Brian Wall has mentored and who have gone on to achieve USCF 2200 Master level ratings. Ask Gunnar Andersen, Josh Bloomer, Jesse Cohen, or Sullivan McConnell if they would be as good as they are without having been schooled by the grand old man of Colorado chess in their younger years. I believe one and all would say they were inspired and shown the beauty of chess by Life Master Brian Douglas Wall.

I can't tell you how many times over the years that I've been asked - about an upcoming tournament or for Tuesday night - "Is Brian Wall going to be there or, will I get to play Brian?" (See diagrams #16 thru #26) Also I want to thank Sikander Baker- Nagar for uploading many March DCC games to denverchess.com/games. Sikander is the reason we have a boatload of games from the DCC March Championship tournament to enjoy.

1) Craig Moffit vs. Richard Shtivelband.  Round 1. Against NM Shtivelband, Mr. Moffit has just boldly played 22. Bxd4 looking to get 2 pawns and an attack for the piece. Which reply would be better, 22... Bxd4 or ...cxd4?