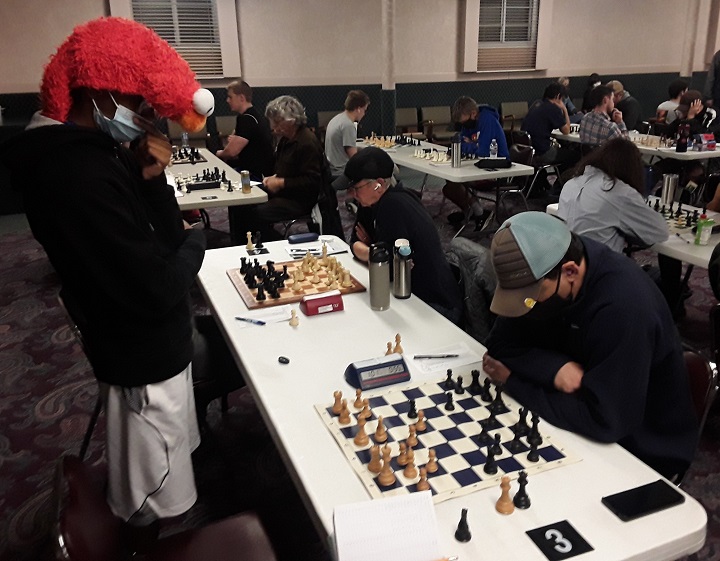 One such player, looking out over the crowded room, remarked to me, "I didn't expect anything like this."

I was hoping I would never have to type C.O.V.I.D. in one of these DCC tournament reports ever again. Wishful thinking that was. Apparently, a DCC Tuesday night player tested positive after round 4. The only reason we know about the positive test is another player received an "Exposure notification" on his phone and contacted TD Brian Ledswoth to let him know. The notification meant "(the player) was within 6 feet of someone for 15 minutes, or longer, who HAS since tested positive." Fortunately, the player who received the alert has been tested twice and both tests were negative. We have not heard of any other positive tests since then. Still, to err on the side of caution, and to allow a gap before the DCC met again, we canceled the last round of the November tournament. 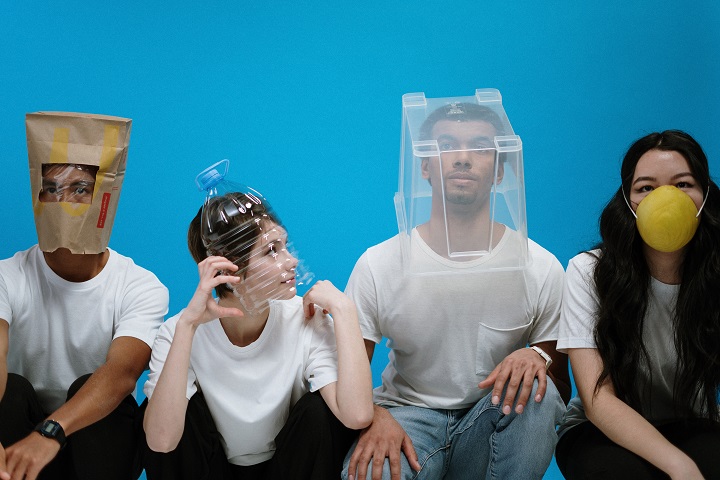 After some debate, the DCC Board decided to go ahead and schedule the December Tuesday night games as usual, but with the requirement that now all players in the room must wear a mask at all times. In compliance with the city of Denver mandate and also as required by the church. The player who received the alert provides this information: "Anyone with an iPhone or Android Phone can enable these “Exposure Notification” Alerts.  I recommend it!  It is private and secure. More details and how to turn it on are here:  https://covid19.colorado.gov/Exposure-notifications  " 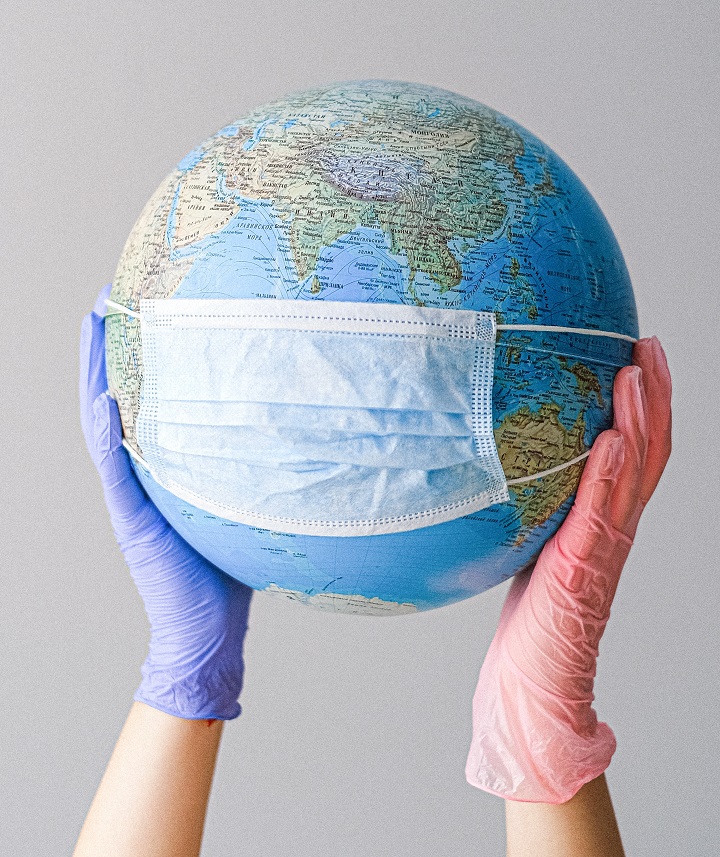 This free to use image by Anna Shvets says it all.

It's hard for me to imagine or predict when COVID will no longer be a concern. We feel that by requiring the vaccine and now mask wearing, we are doing all we can to provide a safe environment to play chess on Tuesdays. It is a player's personal decision whether to attend the club or not. I guess a return to normal will be when some sort of all-clear is declared by authorities from the city, state, or federal government. Personally, I think that happening anytime soon, is more wishful thinking. 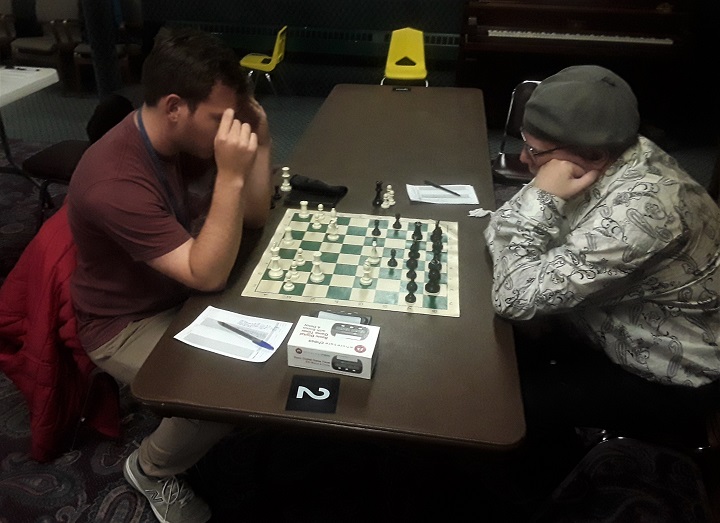 Evan Helman with the White pieces against Ray Haskins.

Anyway, on to the prize winners in the DCC November tournament. But first let me say there is something wrong when National Master Brian Wall, DCC President, Colorado Hall of Fame inductee, and one of the strongest players in the state is given a forced bye as the odd man out in the Premier section. The problem is there are simply not enough players registering for this section. NM Ray Haskins is a welcome addition, but I'm sure he is also disappointed with the low registration. We reduced the minimum rating to 1700 and are allowing Unrated players and still for the 3rd round this month only 5 of the 8 registered >1700 players showed up to play. 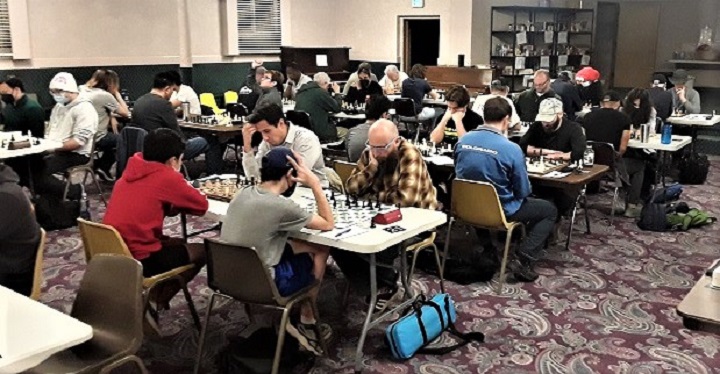 Too bad this photo isn't just the DCC Premier section.

My question is - in light of our outstanding attendance in the Under sections - do we even need Experts and Masters at the DCC? My answer is an emphatic yes, of course, we do. The esteem and prestige of any chess club are based on the strength of its players. In no way is saying that intended to disparage lower rated players, like myself. Our games may not be as technically accurate or as tactically brilliant as Master level chess, but they are certainly just as hard fought. Anyone who observes the players can see and feel the over the board tension in every game, regardless of a player's rating. It can even be seen in the casual games. 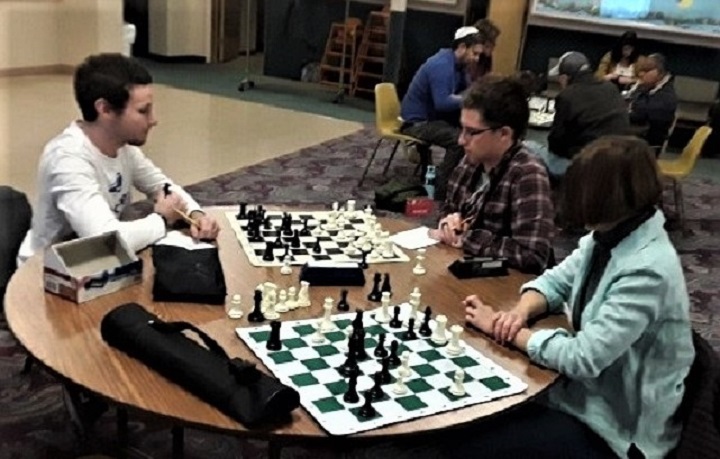 Casual players at the DCC are just as intense as the tournament players.

Players new to or interested in playing USCF rated tournament chess are appearing at the DCC every week. One such player, looking out over the crowded room, remarked to me, "I didn't expect anything like this." The U1900 and U1500 sections are both highly competitive with around 30 players in each section being paired week after week. The room is vibrant, and you can feel the anticipation of the players waiting for the pairings to be posted in the Under sections. Then you look at the pitiful registration for the Premier section and it's a bring down. No other way to put it. 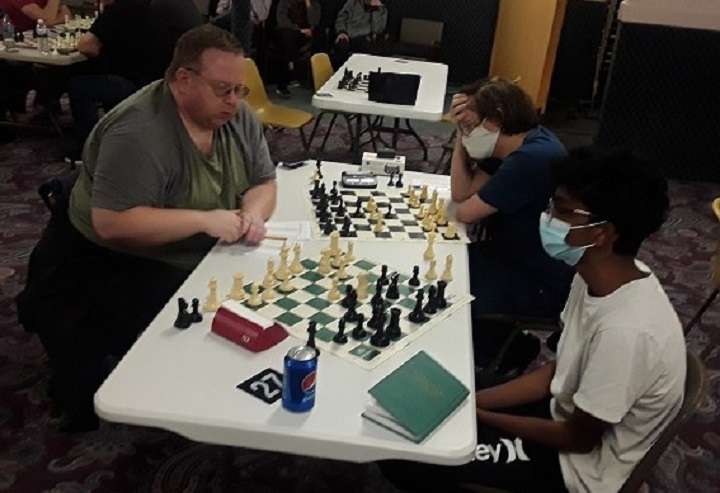 NM Richard Shtivelband playing a mini simul in Round 1. His pairing was against Vedanth Sampath and the extra game was against Noah Peterson, who is wearing the blue shirt.

That said, on with who won what this month. Unlike in the DCC 1-day tournament, here in the Premier section the 3 masters did take the lion's share of the prize money. NM Richard Shtivelband took clear 1st place with a perfect 4-0 score and won $179.98. NM Ray Haskins - like Mr. Wall - also had a forced bye and took clear second place to win $107.99. Losing only to NM Shtivelband. Mr. Haskins did not complain about the forced bye and viewed the extra game pairing with a much lower rated player as a teaching opportunity. An admirable attitude. 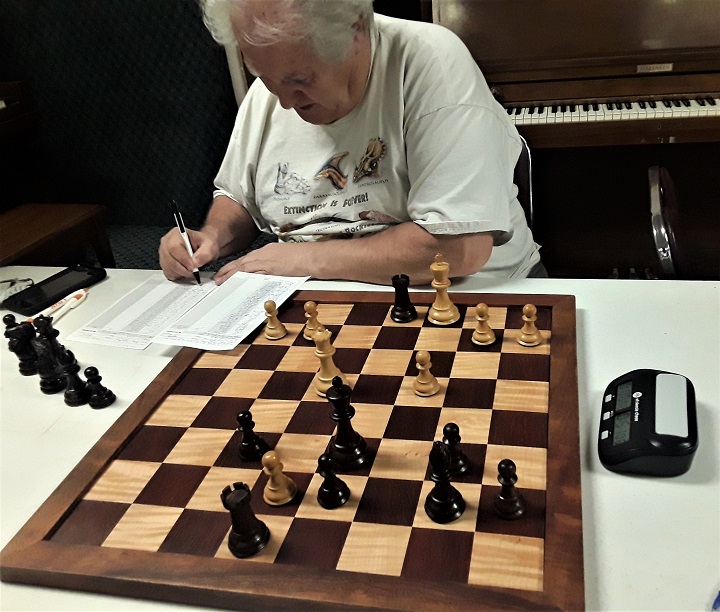 Final position of NM Wall's game against NM Shtivelband. After 31.c4 Richard played ...Rd5-d1+ that as you see wins the White Queen. Brian immediately resigned. It's rare indeed when Brian Wall overlooks a one move tactic. (See diagram #1 Below)

NM Brian Wall lost to the strong but still unrated Juan Brenes and his current nemesis, Mr. Shtivelband. With the forced bye Brian finished with 2 points and shared the 3rd place prize of $72 with Habtamu Aseged. The $20.00 Open Upset prize was won by Dr. Mirza Peljto for his round 3 draw against Mr. Aseged. 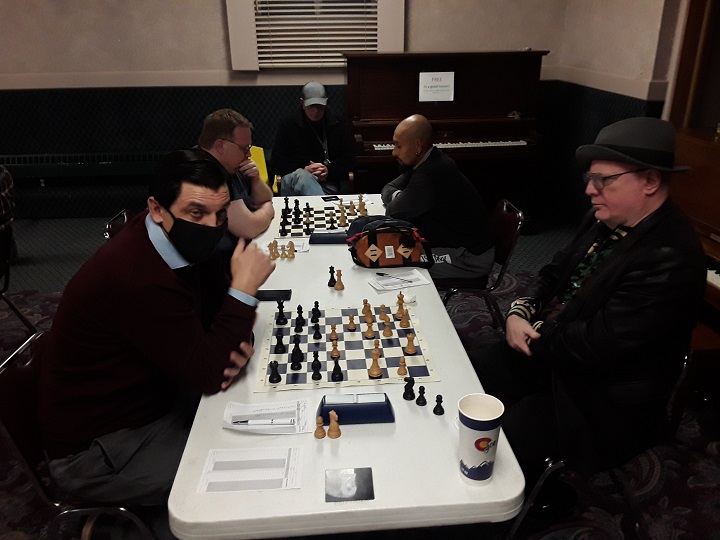 In the U1900 section, Michael Igoe was on fire and scorched every higher rated player that he faced. Every game he played on his way to a 4-0 score was a huge upset win. Capped by his last round 263 point upset over Alexander Huberts. Alexander has recently moved to Denver, and he is another welcome addition to the DCC. Mr. Igoe's outstanding performance earned $174.89. 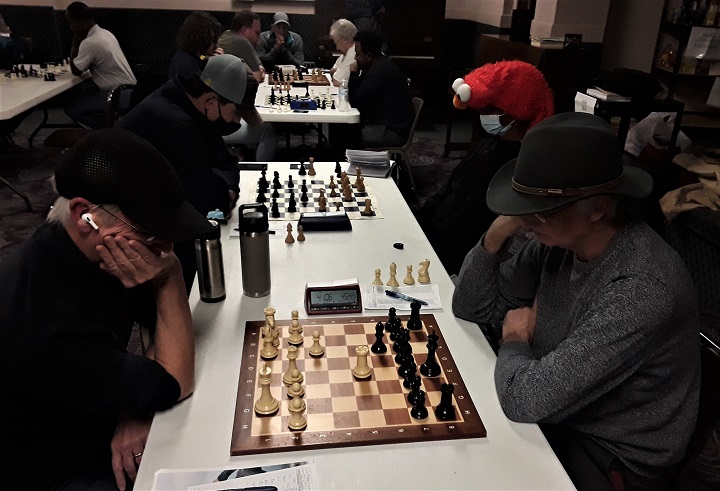 In the fore ground, Alexander Hurberts playing White against Michael Igoe. On the other board Dr. Mirza Peljto is playing Black against Vedanth Sampath (diagram #2)

The combined 2nd and 3rd place prize of 130.80 was shared by Craig Moffit, Mr. Huberts and long time DCC players Ken Doykos and Phil Brown. They all ended up with 3 point scores. Phil was also a Mr. Igoe victim, and Ken lost to Mr. Huberts in round 3. The U1900 Upset prize was won by Noah Peterson for his draw in round 4 against Luis Jimenez 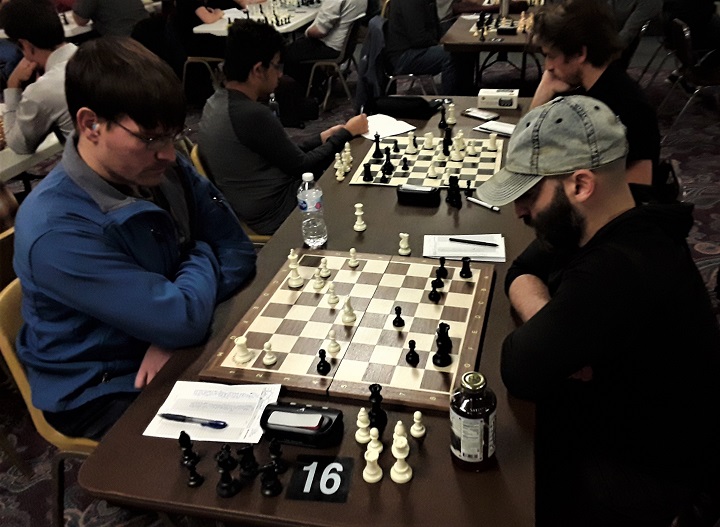 Lev Shulman has the Black pieces against Andrew Robichaud.

Instead of winning the U1500 upset prize this month, Lev Sulman just went ahead and took the clear 1st place prize of 174.39 with a perfect 4-0 score. Which included a last round upset over Andrew Robichaud. Clear 2nd place was won by unrated Sean Diab who gave up a draw in round 1 then won 3 in a row to earn $104.63. 3rd place was shared by Seth Lichtenstein and Phineas Hagg. They both finished with 3 points, and each won $34.88. 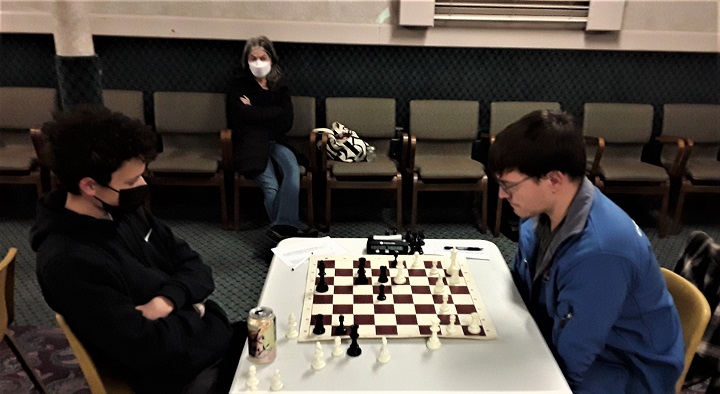 Nicole Hagg is watching her son. Phineas with the Black pieces play against Andrew Robichaud.

The young Phineas' score is notable because his 3 wins were against much higher rated players. The combined rating point difference was nearly 1700 points. Quite a string of upsets for the youngster, I'd say. The actual $20.00 U1500 Upset prize was won by Bejan Akhavan for his round 2 win against Archer Murane.

Congratulations to all the prize winners and thanks to all the players who are making the DCC a thriving chess club. The heading photo is Vedanth Sampath in his Elmo hat. He is playing Dr. Mirza Peljto, who is wearing let's say a less attention getting hat :-)

The Games Section could use some more DCC players posting their games on the DCC Games site. Please.
1) Brian Wall vs. Richard Shtivelband. Round 4. After 27... Rc5xd5 - capturing a Knight - how does NM Wall "win" the Black Queen, and is the resulting position just as winning for Black? Brian was not happy that he missed several winning ideas long before this position was reached. See two "could have been" lines below after the last diagram.
2) Vedanth Sampath vs. Dr. Mirza Peljto. Round 4. After 50.c6 the White g5 pawn can not be stopped. This final position is the result of two strong players duking it out in a classic endgame battle of the Knight against a Bishop. A fascinating game to play over.
3) Jason McEwen vs. Noah Peterson Black has just played 37...Kd8 stepping out of check. This position is not tactical but for you to see "practical" endgame technique. As always Mr. McEwen's notes are highly instructive.
4) Evan Helman vs. Super GM Brian Wall. Round 2. In this position White played 33. Ng5xe4 and offered a draw. How did the Super GM refuse the offer?
5) Ray Haskins vs. Dr. Mirza Peljto. Round 2. At 29...Bf8-c5. Black has just played a nice series of moves to win an exchange. Observe how NM Haskins stays in the game and goes on to win.
6) J.C. MacNeil vs. Kristopher Zelkin. Round 1. I got lucky on move 19. Qd3 when my opponent missed a winning move. In this position after 30...Kxf5 - capturing a pawn - what is the winning move that White plays?
Brian Wall's alternative lines for his game against Richard Shtivelband.
1) 11. Nb5 Na6 12. Bc4 Bg7 13. Qe2+ Kf8 14. O-O +2
Then Vedanth Sampath playing on another board, but checking out Brian's game, suggested to Brian after the game this line:
2) 20. Bh6+ Bg7 21. Bxg7 Kxg7 22. Ne7 f6 23. Rxh5 +5
Thanks again to all,
J.C. MacNeil