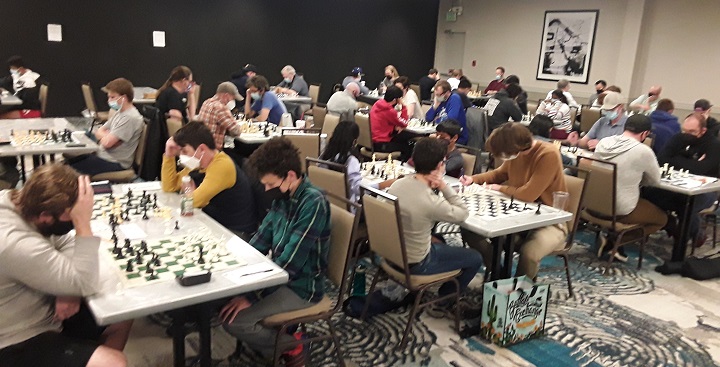 ... and not just the fame and world-wide recognition they receive by being mentioned in these reports :-)

61 players registered for the most recent DCC 1-day tournament at the Embassy Suites hotel. A good turn-out despite the city of Denver mask mandate being enforced by the hotel and the DCC. More on the latest COVID problem will be in the DCC November Tuesday night report that will be posted within a few days. Andrew Starr is proving to be a proficient Tournament Director. Once again, the rounds started on time and without issues. Mr. Starr also printed and posted the standings for all three sections after each round. Something that all players like as they can easily see where they are with regards to winning prize money. 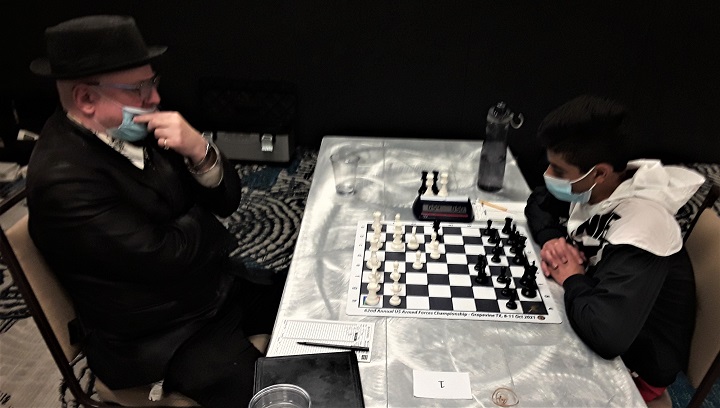 NM Ray Haskins has a hat for every occasion. Here he is facing the strong Expert, Neil Bhavikatti

In this tournament there were truly shocking results in the Open section. With three National Masters in the section, one would just assume that they would take the lion's share of the prize money. Or at least one of them would take 1st place, or failing that, surely 2nd place. Unbelievably, that didn't happen. 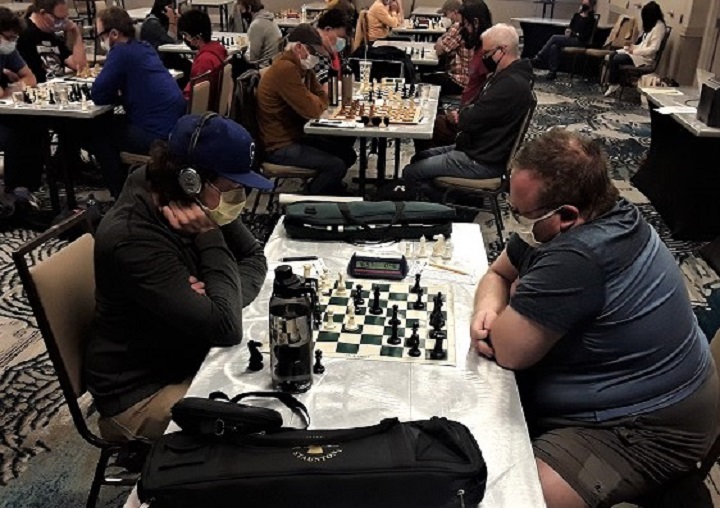 NM Richard Shtivelband, after a disappointing round 1 loss to Ted Doykos, withdrew from the tournament. (see diagrams #7 and #8 below) Ted played a great game to reach an ending where he overwhelmed Richard's lone Bishop and King with his King and 3 pawns. Then Ted, probably floating on a cloud after his big upset, lost his next 2 games. C'est la vie. NM's Brian Wall and Ray Haskins managed to share 3rd place with unrated Chad Stacy. 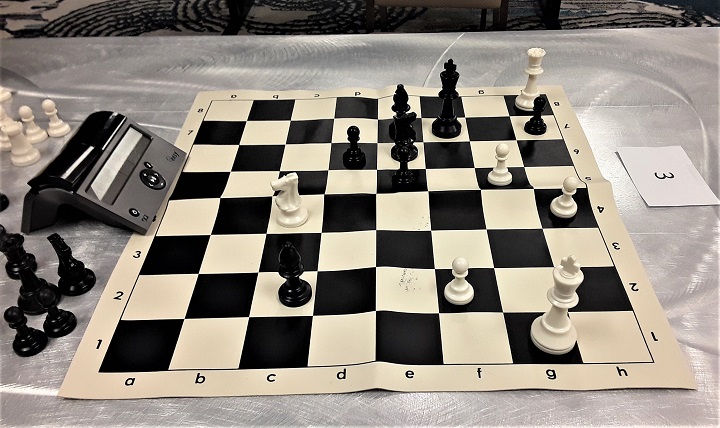 Final position. Down a Queen for 2 Bishops, NM Brian Wall played 38...Ne6 and offered a draw. Mr. Wilber took 15 seconds and accepted. Would you have played on or accepted the draw offer? Keeping in mind it's NM Brian Wall offering you the draw.

They ended up with 2 points, and they each won $13.33. Mr. Wall - as he is prone to doing lately - allowed 2 draws. One to Expert Anthony Whitt, and the other to Unrated Benjamin Welber. (diagrams #9, and #11) Mr. Stacy had a big last round win against Ted Doykos to earn his share of the prize. Ted won the $20.00 Open Upset prize for his win against Mr. Shtivelband. Mr. Haskins lost in the last round to the young Expert Neil Bhavikatti. (diagram #4) Consequently Neil ended up sharing the combined 1st and 2nd prize with Sikandar Baker-Nagar, another young player who is rising fast. They both finished with 3 points and each won $90.00. Sikandar, after a forced round 1 bye, upset the real strong Mirza Peljto in round 2. (diagram #1) 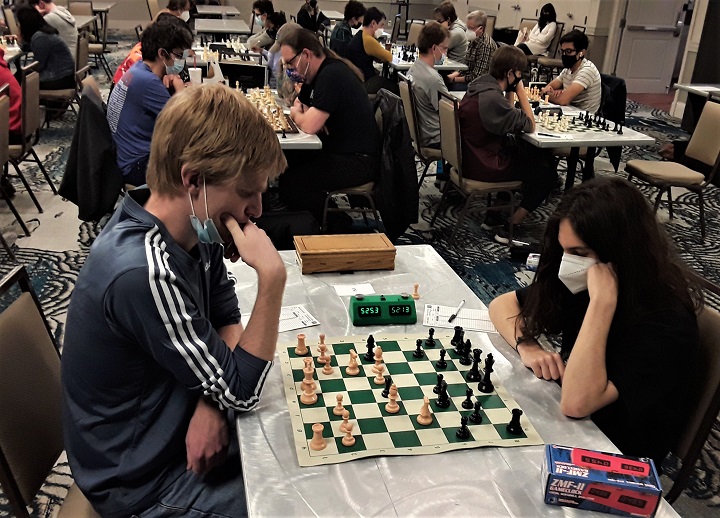 In the U1900 section, yet another young player, Shiven Saxena (diagram #3) tied for 1st place with Luis Jimenez. They both finished with perfect 3 point scores and they each win $90.00. Mr Jimenez had a nice upset win over, the winning a lot of games at the DCC on Tuesday nights, Alexander Huberts. Unrated Calab Pena won the 3rd place prize of $40.00 with a 2.5 point score. Which included a crushing win against yours truly in round 3. Karthika Sakthisaravanan won the $20.00 U1900 Upset prize for her enormous 526 point upset of DCC Tournament Director, Brian Ledsworth. 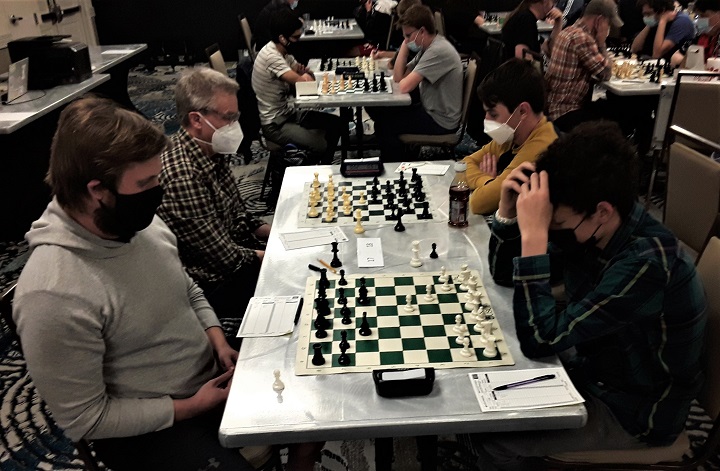 In the foreground Ricky Marchant has Black against Phineas Hagg (DCC Games). On the other board Tom Crabb is playing White against James Manning.

In the U1500 section, Michael McGuire (DCC Games), Ricky Marchant, and Tom Crabb (diagram #5 and #5a) all ended up with can't do better than 3 point scores. They share the combined 1st, 2nd, and 3rd place prize and each won a well earned $73.33. Shaurya Misra won the $20.00 U1500 Upset prize with an even more enormous 717 point rating difference win over James Holt in round 1. Congratulations to all the prize winners. They earned some spending money and not just the fame and world wide recognition they receive by being mentioned in these reports :-) The DCC is most grateful for all the players who are playing in and enjoying DCC tournaments.

Once again, we have an improved Games Section thanks to Tournament Director Andrew Starr selecting diagram positions #1 thru #8 and providing astute comments. His excellent tactical answers to the positions are given after diagram #11.  See all 14 games that Mr. Starr reviewed  in the Chess.com public library.

2) Dillon Richardson vs. Anthony Whitt. Round 1. White just played 13. d5. What is Black's best move to get a significant advantage in this position?

3) Drew Clark vs. Shiven Saxena. Round 2. White just played 23. Ree3. Black has many ways to win, but can you find the strongest continuation? Also see Drew Clark vs. Jeff Baffo

4) Raymond Haskins vs. Neil Bhavikatti. Round 3. White just made an error by playing 14. O-O. What is the amazing move black played to win this game?

5)  Tom Crabb vs. James Manning. Round 3. At 11. Rxe5 White has just played a tactic that seemingly won him a pawn. What move can Black play to win the pawn back and get the advantage?

6) J.C. MacNeil vs. Matthew Miller. Round 2. After 24...a5 find the mate in 3 White used to end this game immediately. (My comment: Despite an overwhelming material advantage, I was pleased to play for checkmate rather than winning by trading off material)
7) Ted Doykos vs. Richard Shtivelband. Round 1. Black just blundered with 10...Bc6. White played Nc3 and went on to win the game, but how could he have won immediately?

...and of course, no DCC report is complete without a few Super GM Brian Wall games:

10)  Brian Wall vs. Dillon Richardson. In this position after 25 ...Bc8-g4 how does The Super GM increase his material advantage?

11)  Anthony Whitt vs. Brian Wall. Round 2. Final position This game was a real battle. White has been up 2 pawns for over 50 moves but Mr. Whitt couldn't find a win. Now with opposite bishops a draw was agreed with both players down to just seconds on the clock.

Thanks again to all.