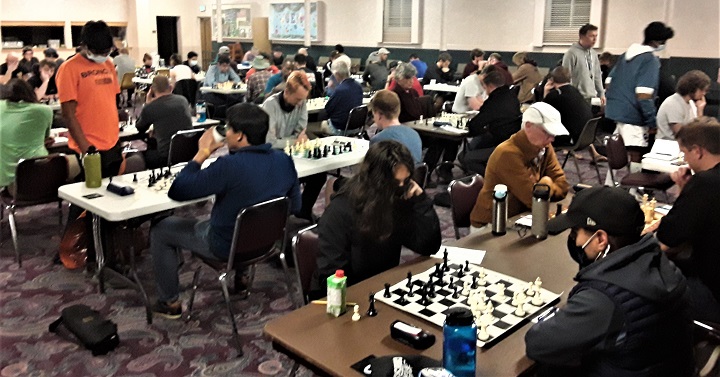 Proving once again that no player can be taken for granted.

Tuesday night attendance continues to average 60 or more tournament players each week. This month we had more players for the last round than we did for the first round. Which indicates players are playing each week regardless of their score or chance of winning prize money. This further indicates to me that the DCC is providing what chess players want. The sections are competitive and fair for all levels of playing strength. We have a quiet, well-lit spacious room. The rounds are starting on time, and the tournament results are promptly submitted to the USCF . The generous monthly prize fund is just icing on the cake. 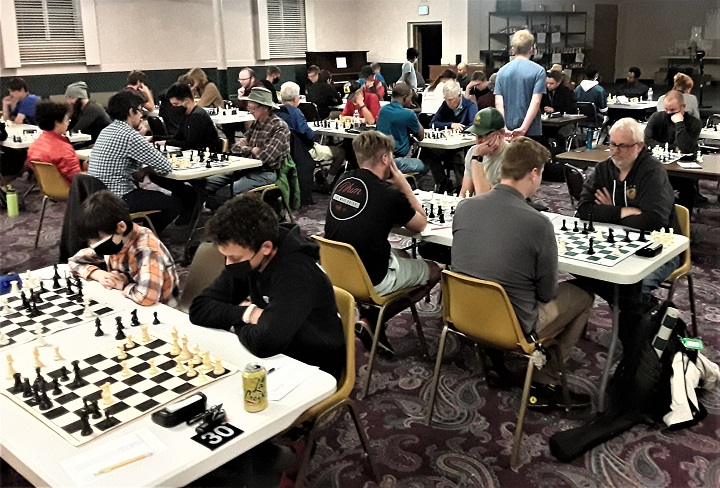 Yes, another room shot. I can't help myself :-)

The Premier section has been strengthened with the addition of new to the DCC, Habtamu Aseged and Juan Brenes. Both have high provisional ratings and clearly they have chess playing skills as they have won and drawn games against NM Brian Wall and NM Richard Shtivelband. In addition, now 2200+ Ray Springfield (Haskins) intends to play regularly at the DCC.

Both Brian and Richard have vowed to lose weight. I say more power to them.

In yet another last round match with prize money on the line, Mr. Wall again lost to his nemesis, Mr.Shtivelband. Nevertheless, Brian was not too disappointed with his latest loss to his main rival at the DCC. Mainly because it was a fantastically complicated game that slipped away in time pressure. (see diagram #1 below) To his credit, Brian has always been more interested in creating beautiful games than in winning prize money. The most recent Colorado Hall of Fame inductee saw numerous ways to force a draw going down the stretch but rejected them all. Looking for an elusive win, despite being low on time. Consequently, the DCC President finished in a 3 way tie for 3rd place. 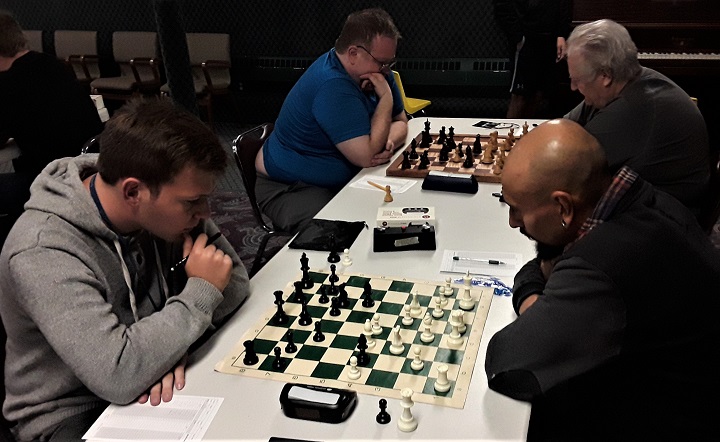 Evan Helman with the Black pieces against Juan Brenes in the last round.

Proof that Evan Helman is way underrated is the fact that he tied for 1st place with NM Shtivelband. They each finished with 3 points and share the $295.58 combined 1st and 2nd place prize. Evan's score includes a round 2 upset win against  Mirza Peljto. Richard dropped a point to Mr. Brenes in the same round. (diagram #5) Sharing 3rd place with NM Wall is Mr. Brenes and Vedanth Sampath. They all ended up with 2.5 points and each won $24.63. The $20 Open Upset prize was won by Yousef Gross for his 1st round upset draw against Andrew Starr. 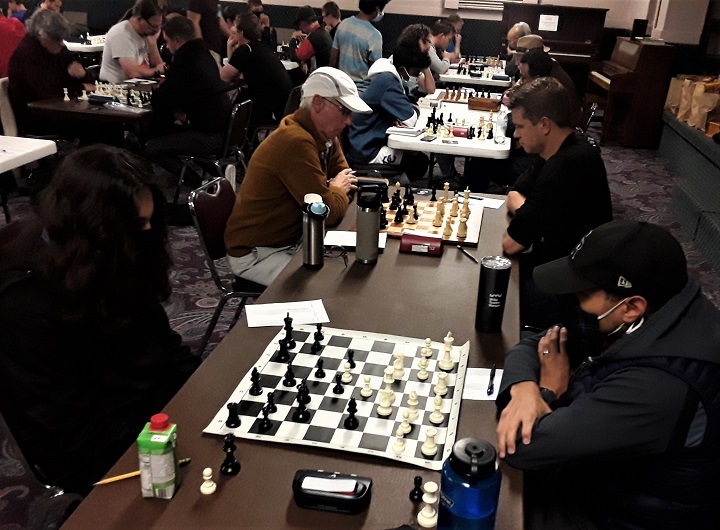 The  forehead is Sikandar Baker-Nagar. The ear is Kristopher Zelkin. I take only the best pictures :-)

Kristopher Zelkin and Jeremy Roldan are making their mark in the U1900 section. They both finished with 3.5 points, and each won $143.21. Mr Roldan's score includes an upset win against the hard to beat, Andrew Eskenazi. Both Kristopher and Jeremy were held to draws by lower rated players. Proving once again that no player can be taken for granted.

There was also a 3 way tie for 3rd place in this section. Ken Doykos, Trevor Mills and Sikandar Baker-Nager all missed tying for 1st place by just a half point, and each wins $23.87 Notably the young Sikandar continued his winning streak from last month with more big upsets in the first 3 rounds this month, Highlighted by a 415 point upset over Ricardo Bogaert, Mr. Zelkin put an end to Sikandar's run when they were paired in the last round. The actual $20 U1900 Upset prize was taken by Dean Kareemo for his 398 point win over Elijah Warwick in round 2. 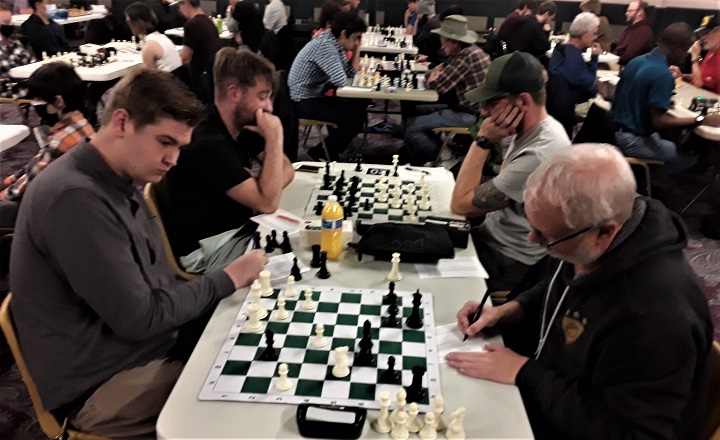 Ethan Dugas, with the White pieces, winning against Brian Ledsworth

Yay!! There is a clear 1st place winner in the U1500 section. Ethan Dugas finished with a perfect 4-0 score and won $179.01. David Goodman took a 1st round bye then won 3 in a row to take clear 2nd place and win  $107.40. Seth Lightenstein, Jaxon Cardenas-Gunny, and Alex Sottile all finished with 3 points and they each won $23.87. Mr. Lightenstein had a nice 128 point last round upset win against Mark Zeringue. Mr. Sottile had two big upset draws over much higher rated players to earn his share of the prize money. 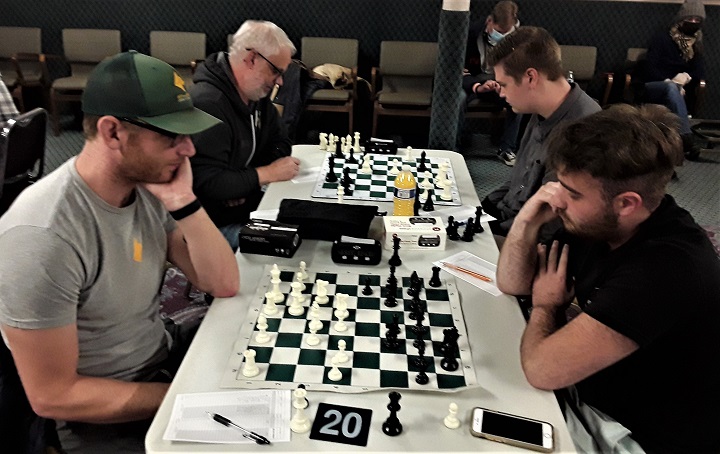 Ian Lieberman with the White pieces against David Goodman

Lev Shulman seems to be making a habit of winning the $20 Upset prize in this section. This time for an enormous 502 point upset over the above mentioned Mr. Zerinque. A rough couple of games for Mark, who I'm sure will bounce back in the DCC November Tournament.

Lacey Rael vs. Madeleine Finch. It's good to see a couple of young ladies playing serious tournament chess. Maybe they were inspired by the Netflix Queen's Gambit movie.

Congratulations to all the prize winners, and a big THANK YOU to all the chess players who are making the DCC an exciting place to be on Tuesday nights.  Thanks to the TD's, who are continuing to do a great job of getting the rounds started on time. It's really not an easy thing to do.

1) Brian Wall vs. Richard Shtivelband Round 4. In no way am I qualified to comment on this game. This position is where NM Wall is saying, "46. Re3!!  =  for the third time, trading Rooks is a draw" Instead he played 46. Kd3?? Brian comments on the game and his opponent by saying "I seemed to have a great position but my time kept disappearing, I never saw a clear win, every corner of the board was in play, it was very confusing. I didn't know whether to guard my king, guard my Queenside pawns, attack Richard's Queenside pawns or attack his King. Imaginary and real mating threats were everywhere. Endgame tactics are sort of Shtivelband's specialty, he plays like Botvinnik, no gambits, just clear, sound, classical play."

1a) the same game  In this position, with White to move, find the elusive win that Mr. Wall missed during the game.  See the solution below after the last diagram. Had Brian found the combination (with 4 and a half minutes on his clock) he would have finished in clear 1st place and won $184.78. C'est la vie.

2) Brian Wall vs. Alexander "Lex" Huberts. Round 1. Find the move in this position that forces Black to resign. Keep in mind that Pawn Wave Guy is playing the White pieces.

3) Vedanth Sampath vs. Brian Wall Round 2. Who is mating who? Fortunately for Mr. Wall, it is Black to move. Find the mate in 3.

4) Drew Clark vs. Brian Wall This is another mini-simul game from the "Super GM, Simul King, Pawn Wave Guy" and also known as the DCC President. Who was at the same time playing the strong Juan Brenes.  In this position after 37. Rdf2, Mr. Wall has 2 connected center pawns backed by a Rook. Observe PWG's excellent technique to win the game.

4a) The same game. at move 17... Qd7. Can you see how White can win a pawn and take off one of Black's Bishops? See the solution below after the last diagram.

5) Brian Wall vs. Jaun Brenes. Round 3. After 26...Qc6-e6 it's White to move. Can you see how to eliminate the weakness in the White position The same move was missed at move 24 and 25. See the solution below after the last diagram.

6) Richard Shtivelband vs. Juan Brenes. Round 2. After 11. b4 White plays 12. Nd5. Is this an unsound sacrifice or does Mr. Shtivelband get a terrific attack down the (e) file?

7) Habtamu Aseged vs. Jason McEwen  Another excellently annotated game from Mr. McEwen. Using words, rather than long incomprehensible computer generated lines of analysis. In this position after 36. Bf6-a1 why is 36...h6 not the best move?

8) Alexandra Kries vs. Andrew Robishaud Round 2. In this maybe drawn position, why was 52. Ke3 a losing move?

9) Andrew Robichaud vs. Ryan O'Malley Round 1. Black, in the course of the game, had carelessly dropped both a Rook and a Bishop. Mr. Robichaud took advantage of that to have in this position a mate in 2.

Brian Wall's solution to Diagram 1a.

Brian Wall's solution to Diagram 4a.