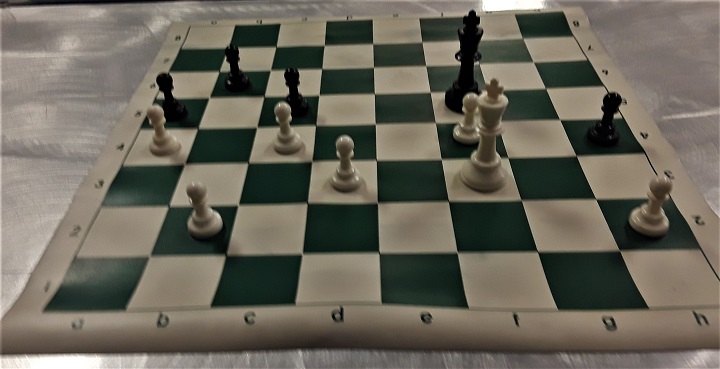 "I play chess and I know things"

One of the best things about Dean Clow's caissachess software  is the easy access to statistics dating back to January of 2015 for all DCC tournaments. Based on over 70 players registering for our one-day Almost Normal tournament in July, we sort of expected a larger turnout for this traditional 2 day, 5 round, longer time control tournament. The 62 player sign up was certainly not bad, as it matched the average attendance of previous DCC Fall Classics. But we were expecting 10-20 more players. Do most players now prefer one day tournaments?

The 2021 DCC Fall Classic is up and running

Other than the next Denver Open, where we intend to entice GM's and IM's to attend as well as draw in players from across the United States. As we did in the awesome 2019 Denver Open. The question I have is, in addition to Tuesday nights, should the DCC just have one day Saturday tournaments? A consideration is less travel time and less expense. In a 2 day tournament, a player is either driving back and forth or staying overnight at the hotel. Plus the entry fee is half that of a 2 day tournament 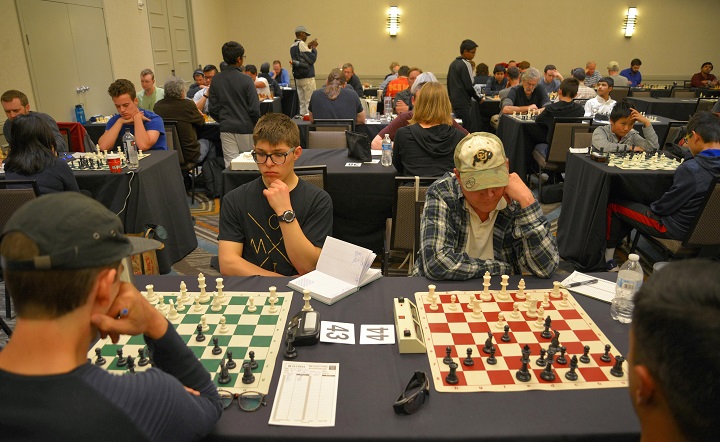 A John Brezina image from the DCC 2019 Denver Open. 110 players in this room 50 more in the Championship room. We hope for bigger and better in 2022

An idea I have is to have an "Either or Both'' tournament over a weekend. Saturday would be say 3 rounds with a G/90;d3 time control. Sunday would be maybe a 10-12 round rapid G/12; d5 tournament. Or maybe - depending on the number of players - a G/5 blitz knockout tournament. With each pairing playing 2 games, and with players knocked out in the 1st round forming a new bracket. and again for a third bracket. To have 1st, 2nd, and 3rd place prizes. OK, that sounds like a big TD headache :-) So maybe round robin blitz in each section or start with 3 knock out brackets by rating. The idea is players could register for both days or play in one or the other. This would be something new and different. Any comments or less crazy ideas for DCC chess tournaments are welcome. How about a 3 round G/90;d3 Fischer Random tournament on the 2nd day? 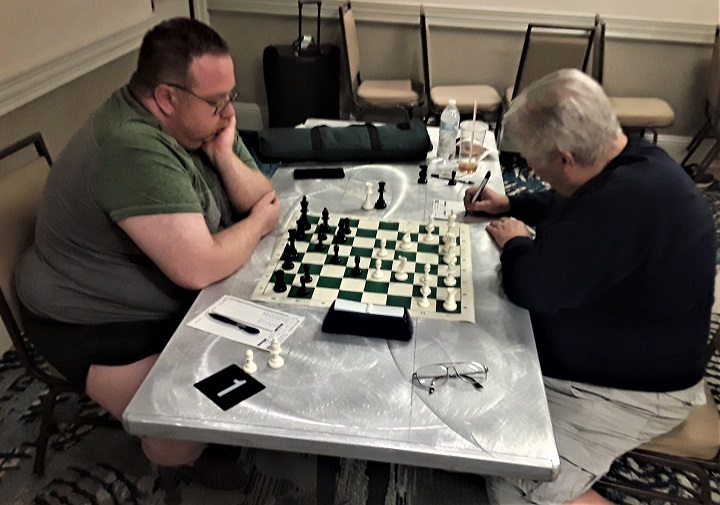 There is 700 pounds of chess player in this picture... at least :-) Richard Shtivelband vs. Brian Wall in the last round

Maybe I should just stick to reporting who won what in the most recent DCC Fall Classic. In the Open section going into the last round NM Richard Shtivelband had a perfect 4 out of 4 wins. Richard - as the chess gods would have it - was paired against NM Brian Wall. Who had suffered an upset loss in round 3 to the getting stronger by the game, Vedanth Sampath. Consequently it was a must win game for the recent Colorado Hall of Fame inductee. Mr. Wall was not able to win or draw and finished out of the prize money with a 3 point final score. Mr. Shtivelband's fine clear 1st place 5-0 performance earned $216.10. 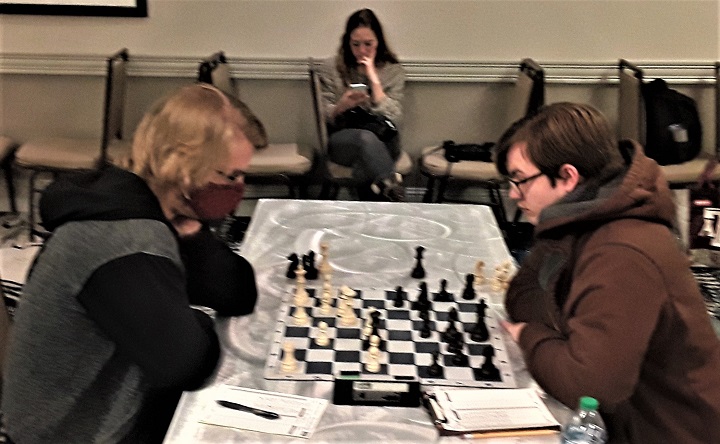 Griffin McConnell with the Black pieces playing Eric Massey. The Denver Post photographer in the background

Rhett Langseth, Neil Bhavikatti, and media darling, Griffin McConnell all ended up with 3.5 points and they each won $72.03. Further proof that Vedanth is rising fast is the fact that he also had a big upset win against Rhett in round 2. For the big Upset win over Brian Wall, Vedanth  wins the $20 Open Upset prize. The Denver Post and Fox news  were at the tournament to do follow up stories about Griffin. I cannot begin to imagine enduring the numerous brain surgeries that Griffin has had to undergo to correct epileptic seizures. Yet here he is today playing chess at a high level with a happy go lucky attitude. "I only got half a brain and I can beat you at chess" - "I play chess and I know things". Look for the Post article towards the end of the week, (Update: Denver Post article published Sunday, 10/31) and I believe Mr. McConnell said the FOX news story will air Friday evening. 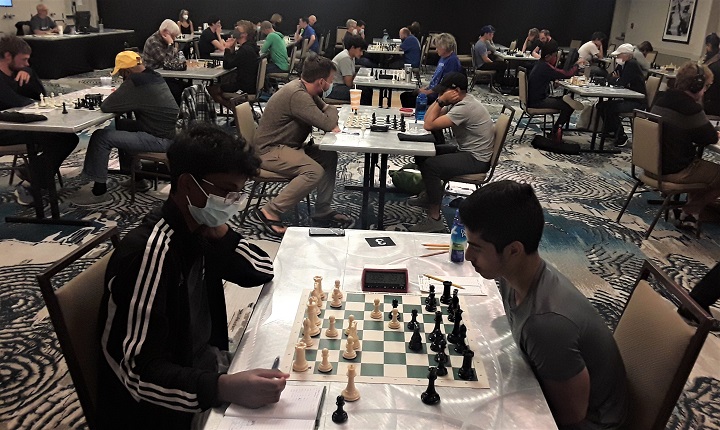 The U1800 section was won by Parker Grandpre with 4.5 points. The draw was an upset against Kristopher Zelkin, who has been winning all his games at the DCC on Tuesday nights. He also had a big round 4 upset win against the real strong Jeff Baffo in round 4. So he definitely earned his clear 1st place prize money of $209.45. 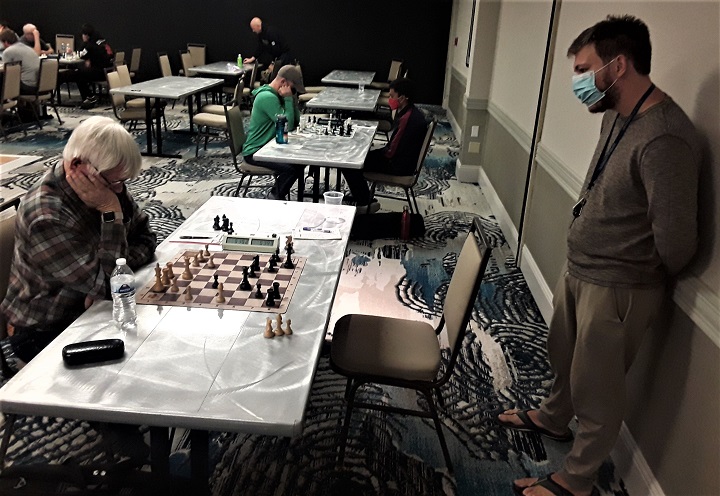 Way underrated Evan Helman has been winning against much higher rated players at the DCC on Tuesday nights. He shares the combined 2nd and 3rd place prize with Shiven Saxena. With 4 point scores they each won $104.73. Shiven is another young player whose game is improving quickly. All of his wins were big upsets, including a crushing win against yours truly in round 5.

It was funny when I tried to resign, Shiven convinced me to play on with a move that I hadn't seen. His friend, Vedanth saw us having this conversation during the game and came over to the board. I told him we were just doing some analysis in the middle of the game :-) Anyway, I did play on and Shiven proceeded to show me some more tactical tricks. He finally "allowed" me to resign when my position was beyond hopeless. Evan and Shiven each win $104.73. The $20 U1800 Upset prize was won by Andrew Robichaud for his big 515 point round 2 upset over Mukund Gurumurthi. 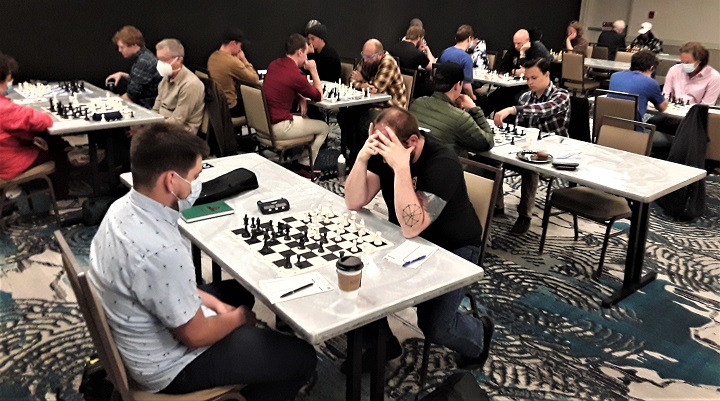 Players mentioned below may be in this photo, or not. I don't have any excuse for not getting individual shots of the prize winners. Or if I did I can't now connect the photo with a name. Fine reporter I am.

For this tournament the DCC restricted an Unrated player's prize to $100 if not playing in the Open section. Consequently John Opella's 4.5 point score and clear 1st place win of the U1500 section was "only" worth $100. The reason for the restriction is that players can get real good studying and playing online without ever playing a USCF over the board game, or opening a printed on paper chess book. The good thing for Mr. Opella is he will now have a provisional USCF rating and that removes any restrictions from future prize winnings.

Seth Lichtenstein and Scott Jackson both finished with excellent 4 point scores and they each won $104.73. Surprisingly there were only 2 upsets in this section. Annale Charfauros won the $20 prize with a 137 point upset draw against Paul Krucke in round 4. When it's a draw upset the rating difference is cut in half, and this was greater than Jaxon Cardenas-Gunny's 80 point upset win over Karmon Corria.

Congratulations to all the prize winners and thanks to all the players who enjoyed 2 days of DCC tournament chess. Thanks also to the Tournament Directors who ran the tournament quite well. The "artistic" heading photo is the final position of NM Shivelband's round 4 win against Vedanth Sampath. White has way too many pawns.

1) Brian Wall vs. DuWayne Langseth  Round 4. Black has just played 17...0-0-0 Why was 18.h3 a bad move? Or as NM Wall says in his notes to the game  "OMG! I did the same thing against Vedanth Sampath the previous round, I lost my focus and lost my best pawn."

1a) the same game Of course dropping a pawn early is not going to stop Brian Wall from winning with a pawn move 55 moves later. What did Pawn Wave Guy play to win in this position? Before this position was reached, starting around move 67, in analysis DuWayne, Brian, and DuWayne's son, Rhett tried to find a way to hold a draw, but to no avail.

2) Vedanth Sampath vs. Brian Wall Round 3. This is a fascinating game to play over. After 21. h3, I can picture Brian's eyes lighting up. What do you suppose Pawn Wave Guy played?

2a) the same game With 23...f5 the pawn wave has begun. 5 vs.1 on the Kingside. Rooks behind the pawns, a mere Bishop standing in the way. Brian was probably drooling.

2b)  the same game In this position after 50. a4 the knight is hopeless against the pawns if Black makes the correct King move. What would you play? See what Mr. Wall fully intended to play below after the last diagram.

2c) the same game Instead, inexplicably Brian played 50... Kd4 What did this allow?

2d) the same game It allowed 51. Nxf4 and the pawns are stopped. Black resigns. An unfortunate over the board mouse slip. Your brain says one thing and your hand does something else.

3) Anthony Whitt vs. Brian Wall Round 1. After 24. Qxe5, taking a pawn, find the move Mr. Wall is "...very proud of my move, I didn't know until just now the landscape was littered with wins." Brian then mentions several winning moves. See his suggestions below the last diagram. Come up with your own and see if they match NM Wall's list. Mr. Whitt complemented Brian on Facebook, saying "Thanks for reviewing the game with me. Both Annalee Rose Charfauros and I agree, you are one of the nicer players around." Is he talking about the same Brian Wall that I know? :-)

4) Brian Wall vs. Keith Qxman Round 2. For those of you who don't know, In addition to being an excellent chess player, Keith is also an accomplished saxophone player, who has been in the studio with Miles Davis and other Jazz greats. Mr. Wall uses a Jack Young term for Mr. Oxman's 14...g5 "Theoretical Lemon". Keith got a kick out of that and said he may use it as a title for his next Jazz recording. 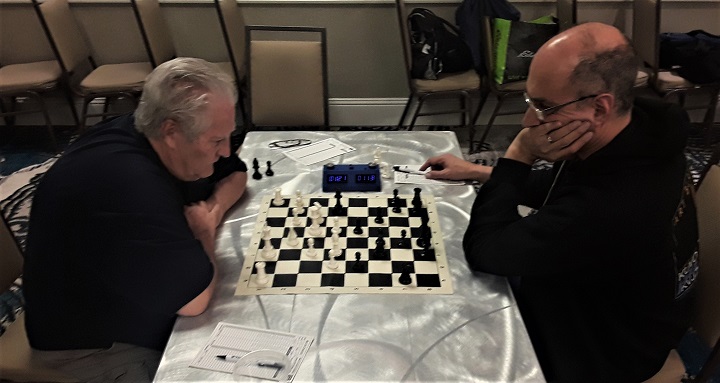 Keith Oxman with the Black pieces against Brian Wall. You don't get into a Miles Davis recording studio without some serious horn blowing talent.

5) Joe Bean vs. Keith Oxman Round 4. Looks like trouble for the saxophone player. Can you find the forced draw? Mr. Oxman has uploaded many interesting games to DCC Games. Well worth your time to play over.

6) Phil Brown vs. Jeff Baffo. Round 5. Mr. Brown had dropped an exchange earlier, but in this position (after 31 Rc1-e1) with the outside passed pawn he has compensation I'd say. But, Mr. Baffo, finds a neat way to force a draw. I think it's forced. Or both players were scared to play on :-)

7) Phil Brown vs. Meint Olthof Round 1. Meint has been gobbling pawns while Phil has been sneaking up on his King. Phil's comment in this position is: "Black resigns with a full stomach in light of ..." and Phil gives the winning variation.