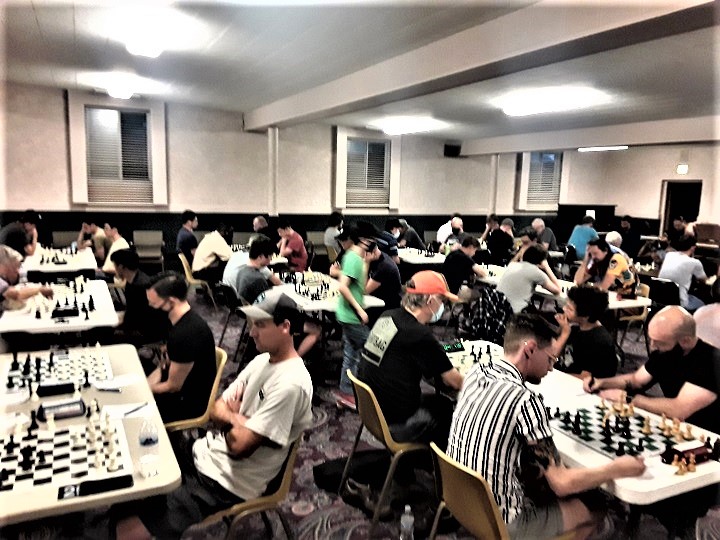 I hope they have found their DCC experience to be exciting as well as beneficial.

We were all anticipating the return of DCC Tuesday night tournament games. Not knowing if the registration would be high or low after 19 months of being closed due to the nationwide pandemic, and with the DCC requiring a full COVID vaccination. In addition to requiring players to also sign a DCC liability waiver. We did not in our wildest dreams anticipate that the re-opening at the door registration line would back up nearly around the block. Okay, that is an exaggeration, but the line did extend a ways out the door for pretty much the entire registration time period. Brian Wall said he arrived early and from the parking lot watched the line forming in stunned disbelief. 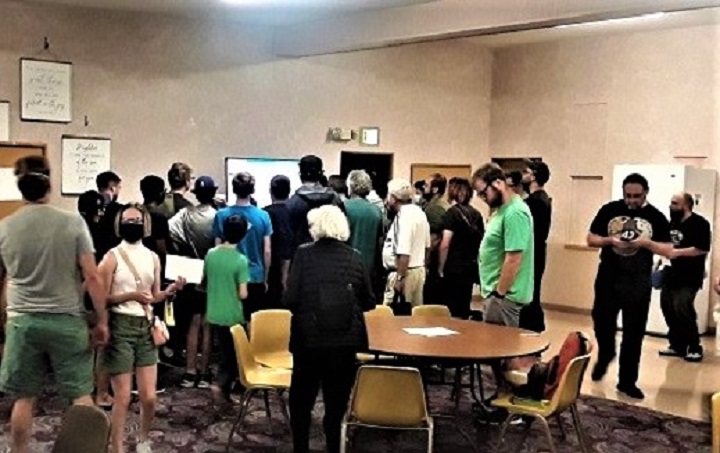 Players gather around the DCC pairing screen once the pairings are posted. The TV has proven to be a valuable DCC addition.

We averaged 63 players playing in the USCF rated tournament each week. In my memory this is the first time we have had such a consistent turnout for the entire month. A total of 94 players played at least one rated game. Which I believe is also a DCC monthly attendance record. Another good sign was the uptick in the number of casual players in attendance. Regretfully, the games did not start on time until the final week. Although this was not entirely the fault of the DCC Tournament Directors. Here I'm offering some reasons and excuses for the late starts: 1) The DCC willingness to accommodate late arrivals. 2) Understandably many new players had questions at the registration table. 3) New players not signing up for a USCF membership before arriving at the door. 4) New TD's being unfamiliar with caissachess software. 5) A bewildering and unexpected software glitch. Going forward, our goal for the Tuesday night games is to start at 7:00 PM, or be no more than 5 minutes late, and more importantly, to avoid re-pairings altogether. Aside from the round starting time delays, I would say the reopening of the DCC was a great success. 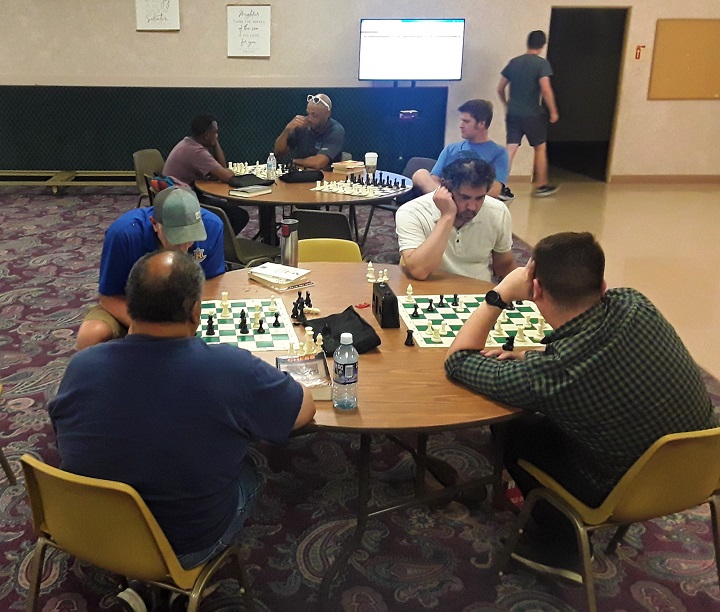 Casual players are always welcome at the DCC

So now on with who won what in the return of the DCC Tuesday night live over the board games. The 17 player Open section featured 3 Masters, 4 Experts, and 3 strong class A players. Sullivan McConnell had no trouble with any of them. He is simply winning all his games. He secured clear 1st place with a round to spare, allowing him to bypass the last round. His streak was highlighted by a win against NM Richard Shtivelband in round 3. This fine 4-0 score earned Sullivan the 137 dollar 1st place prize. 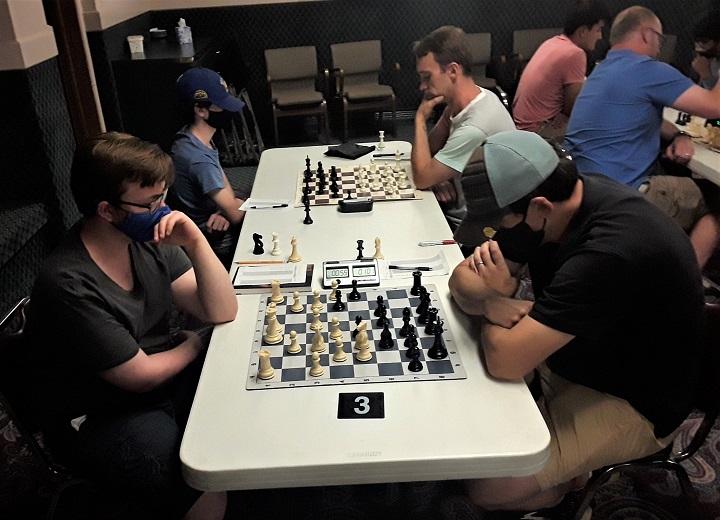 Sullivan McConnell with the Black pieces playing Jesse Hester. His brother Griffin has the White pieces against Mirza Peljito

There was a massive 7-way tie for the combined 2nd and 3rd place prize of 129 dollars. NM Shtivelband, NM Brian Wall, along with the strong 1900+ rated players George Woodbury, Dr. Mirza Peljto, Vedanth Sampath, and much better than his 1779 rating, Evan Helman all finished with 3 points and equally share the prize money. Richard Herbst - who long-time Colorado players will remember as a youngster from back in the day - is now a young adult with a successful pharmaceutical career in New York City, He is keeping up his game by playing regularly at the famous Marshall Chess Club. Richard was visiting Colorado and took 4 byes for pairing purposes to play and win a last-round game against the strong Expert Jesse Hester to also have 3 points, but not winning any money due to the DCC bye policy of only one bye counts towards prize money. (see diagram #1below) 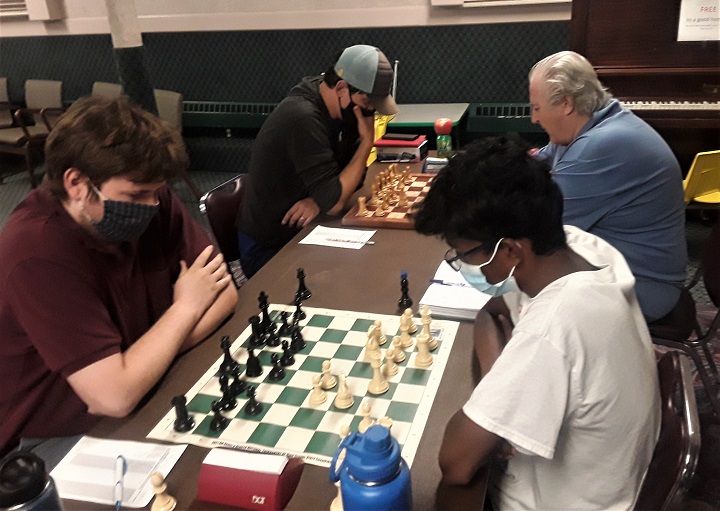 George Woodbury playing Black against Vedanth Sampath. In the background Dr. Peljto is once again holding Brian Wall to a draw.

The 20 dollar Open section Upset prize was won by the youngster, Harsh Mali. Rated 1435, Harsh held the strong 1906 rated Dr. Peljto to a draw in round 2. Who in turn had a big upset win against Griffin McConnell in round 4. Then to put the icing on the cake, he held Brian Wall to a draw in round 5. Dr. Peljto is making a habit of not allowing the Super GM to win. I should also mention that Mr. Helman also held the Super GM to a draw in round 1. As did Griffin McConnell in round 3. and Mr. Woodberry in round 5. The Super GM did manage to actually win a game in round 2 against 1432 rated Elijah Warwick, who must have been having an off day :-) (diagrams #2, #3, and #9) 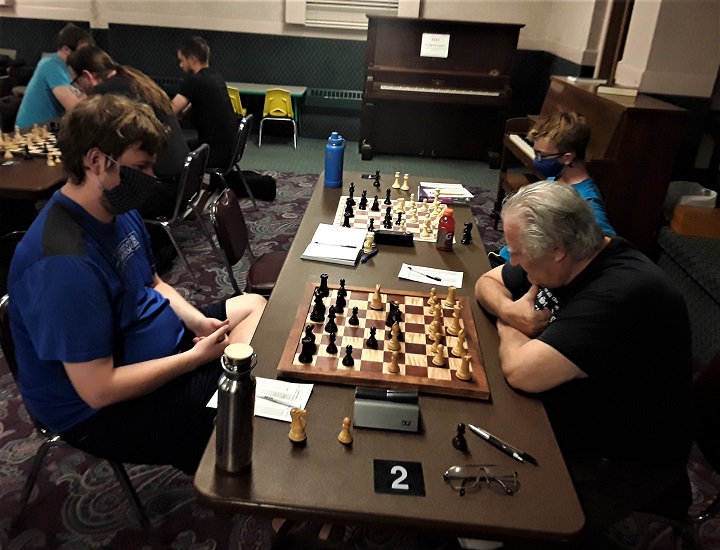 Colorado Chess Hall of Fame inductee Brian Wall playing White, also giving up a draw to Mr. Woodberry
Now that I'm done ribbing the DCC President, I should mention that he - along with Michael Mulyer, Todd Bardwick, and John Harris, - has been inducted into the Colorado Chess Hall of Fame. Of this select group, unquestionably Mr. Brian Douglas Wall is the most deserving. If only for the fact that, unlike the others, he has from the beginning played in every possible Colorado chess tournament. Winning most of them to become Colorado state champion numerous times. His love of the game and burning desire to win is an inspiration for us all. 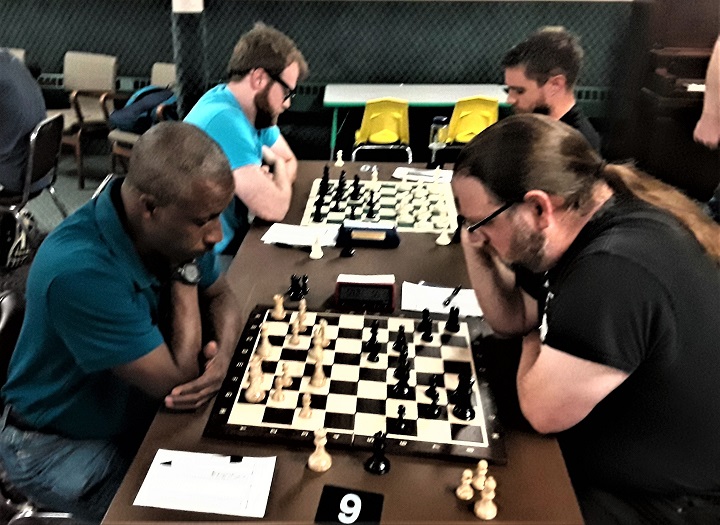 Bill O'Neil with the White pieces against Phil Brown.

In the U1900 section, I was real glad to see long-time DCC member Bill O'Neil win 1st place money. Mr. O'Neil shares the combined 1st and 2nd place prize of 213 dollars with unrated Kristopher Zelkin, who I believe is new to the DCC. Bill lost to Mr. Zelkin in round 1 then won 4 in a row, which included a nice upset win against the hard to beat, Phil Brown (diagram #6) Kristopher won his share of the prize money with 3 wins and 2 draws. All of his points were against strong experienced players. In particular a draw against Ricardo Bogaert and a last round win against James LaMorgese could not have been easy. Although Mr. LaMorgese did say he let a promising position slip away. Or Mr. Zelkin took it away :-) 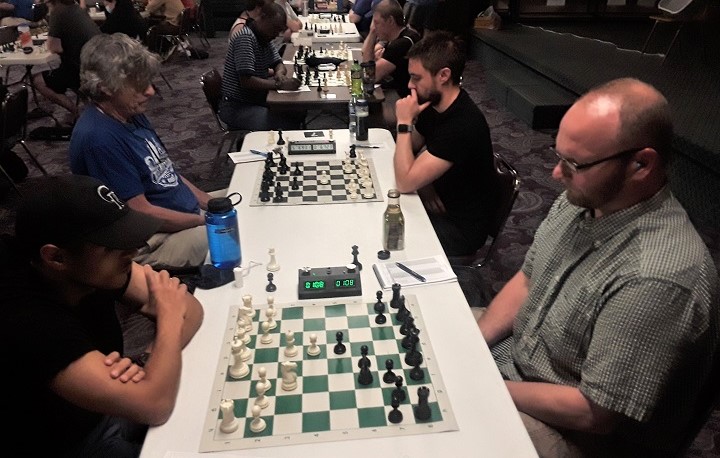 Five players share the 53 dollar 3rd place prize. Ken Doykos, Dylan Goertz, Trevor Mills, Jesse Mellinger, and Charlie Flaxbeard. Dylan, Trevor, Jesse, and Charlie all had big upset wins to earn their share of the prize money.  Best was Mr. Flaxbeard's last round 428  rating point difference win over Phil Brown. Mr. Brown being upset twice in a tournament is a very rare event. The actual 20 dollar Upset prize was won by Arjun Iuyer, who won against long time DCC player, Randolph Schine. I know for sure that had to have been a hard fought game. 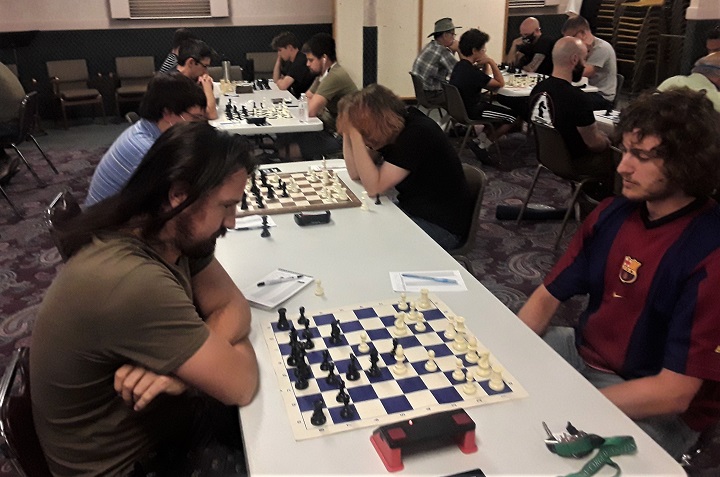 Drew Clark with the Black pieces against Yosef Gross.

We also had interesting results in the U1500 section. First, unrated Yosef Gross took clear 1st place with a 4.5 point score. He took a 3rd round bye and won all his other games. This fine performance won 133 dollars. Then unrated Seth Lichtenstein took clear 2nd place with 4 points. Losing his 1st round game but then winning 4 straight to take home 80 dollars. I think it's great when new players come into the DCC and win money in maybe their first USCF rated chess tournament. 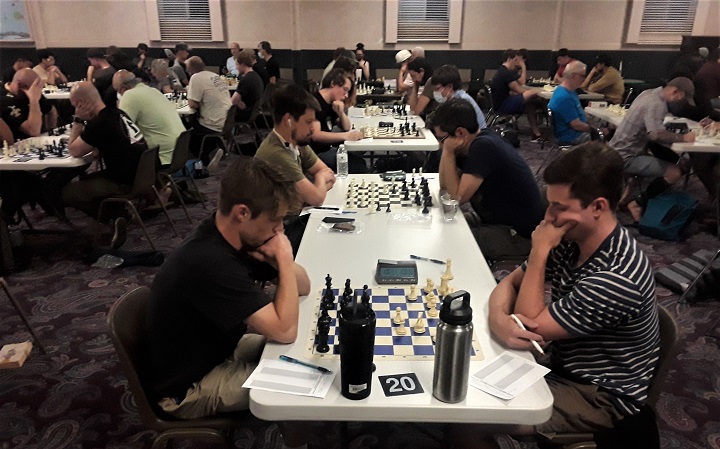 Also in this section there was another multiple player tie for the 3rd place prize. Drew Clark, Noah Peterson, Alex Sottile, and Richard Robichaud all finished with 3.5 points and each won 13 dollars and 25 cents. Alex is only rated 294 so when he won against Nash Nicholas in round 3 it was an enormous 1132 point upset. I guess since Alex was winning a place prize the actual 20 dollar Upset prize went to Michael Melcher for his 274 point rating difference win against Justin Moss in round 4. I'll ask the TD's why Alex didn't get the higher value Upset prize with Drew, Noah and Richard then winning $17.67 each.  See the cross tables for all sections of this tournament at: USCF Event Summary .

I am most pleased to be reporting all the new names mentioned as prize winners in this report. I hope they have found their DCC experience to be exciting as well as beneficial.  Congratulations to all the prize winners, and thanks to the DCC Tournament Directors for handling the difficult registration process. Now if they can just get their act together and start the games on time :-)

1) Richard Herbst vs. Jesse Hester. Round 5. Black has just allowed 37. Rxd7 to capture a Knight. Probably thinking 37... bxc3+ was going to regain the material after 38. Nxc3 or he would have a strong passed pawn. What's wrong with this idea? To be fair to Jesse, Richard said he was under time pressure. See Mr. Herbst's comments on this game below after the last diagram.
2) Dr. Mirza Peljto vs. Brian Wall  Round 5. Final position when a draw was offered and accepted. This appears to me to be a mercy draw since White has more and better pawns. The Colorado Hall of Fame inductee has not been pleased with his game lately. Saying "I am groveling for draws" (see also diagram #9 where NM Wall continues his rare string of draws at the Colorado Open)
3) Elijah Warwick vs. Brian Wall Round 2. It's only fair to show the game NM Wall won. Black has just played 17... Ng6-f4, beginning a typical Super GM Brian Wall kingside attack. Do you see the danger of playing 18. gxf4? As Elijah did in the game.
4) Torin Brown vs. Chad August Round 4. In this position Black played 20...axb4. What did he overlook?
5) The same game Despite being down material Black has made a game out of it with 42...Rf2-h2. How does White stave off disaster in this position?
6) Phil Brown vs. Owen Christ Round 3. Black's last move was 24...Bg7-h6. Why was that a losing move?
7) Jason McEwen Vs. Archer Murane. Round 3. I always look forward to Mr. Ewen posting his games to DCC Games as his annotations are always quite instructive. Here Jason plays 27. Rf3-h3 which is certainly not a bad move, but what would have been even better? (note that the game info says this game was played at the DCC Nearly Normal tournament but was in fact played here at the DCC on Tuesday night, August 17th.)
8) Abhinav Krishna vs. J.C. MacNeil I finally played a half good game. In this position White has just captured a Bishop with 24. Qxe7. How does Black reply? My annotations are not at all on a par with Mr. McEwen's :-)
9) Andrew Starr vs. Brian Wall This game was annotated by Andrew Starr who played Brian at the 2021 Colorado Open in Round 1. Andrew's comment about the game was: "I'm a little disappointed that I seem to have let the win slip away in this game, but you can't complain about a draw against such a strong player" True that. In the diagram position, Andrew says Brian told him he missed 19. Bc1-g5. But being Brian Wall he found the best reply. What would you play as Black in this position?
Richard Herbst's comments on diagram #1
He probably should have played 13...g6 to keep my knight out of f5.  16.Qxd6 was nice and fancy, but I should have gone for 16. Nxd6+ Bxd6 Qxd6 b4 Qxe5+ Kf8 Rd4! and then b4 hangs. I missed Rd4 from afar and instead thought I would have to give up my knight on c3. He also had the opportunity for 35... a3+!, and then after Kc1 he has the plan of Ke6-Nf6-Nd5-Rac8 which could make this a very tough conversion.  I didn't play the ending great but managed to put enough pressure on the clock that he eventually blundered with 36...Ke6 with under 2 minutes.  It was nice to finish off with 39. Nxc3! in view of Rxc3 R1d6#.