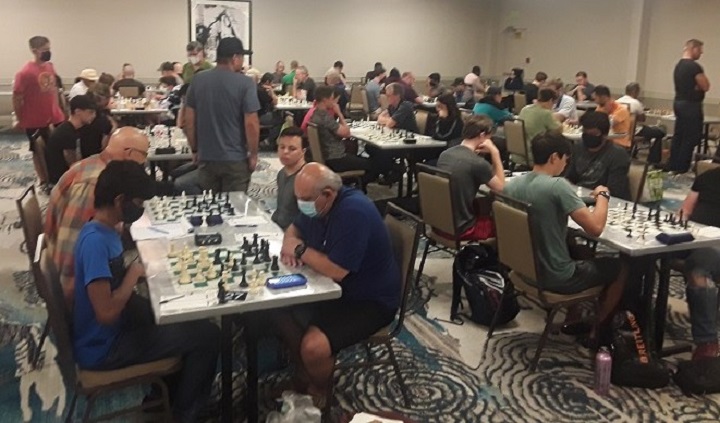 ... and the whole room broke out in applause.

What a great follow up we had to the DCC "Nearly Normal"  tournament. Our "Almost Normal" tournament attracted over 70 players. Just an excellent turnout for a one day event. In both of these tournaments nearly half of the players were Unrated. Clear evidence that DCC tournaments are attracting new players to USCF rated tournament chess. Apparently, due to a large percentage of the U.S. population being reluctant to take the vaccine, the COVID danger will not be going away anytime soon, Maybe we'll call our next one day event a DCC "New Normal" tournament :) 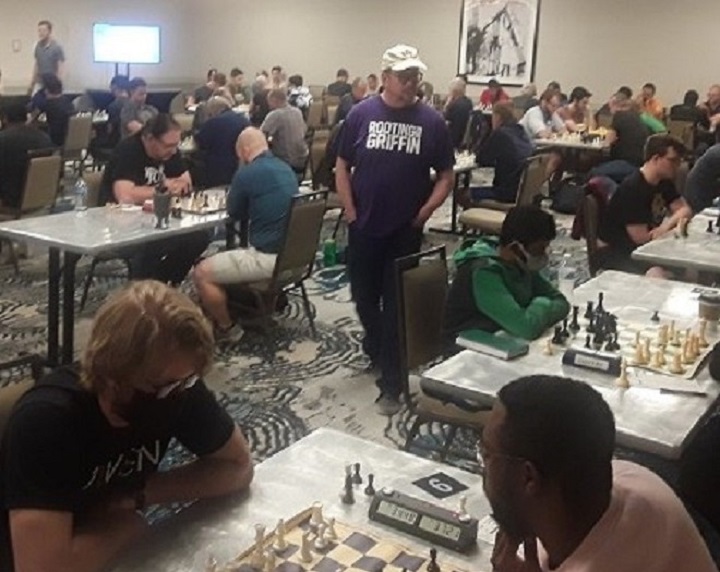 Kevin McConnell, proud father of Griffin and Sullivan, is observing the games.

Several players mentioned that due to travel time and expense they prefer one day tournaments. Also a few of the unrated players I spoke to said what we all know: Over the board tournament chess is way more intense and rewarding then any kind of online chess. Intense because your opponent is sitting directly across from you and breathing fire on your position :) Rewarding because the DCC puts up a generous prize fund, and  distributes it fairly to each section. Pleasing to me was before the last round, I got up to mention DCC Tuesday nights and said something like "thanks to everyone for making this a great tournament" and the whole room broke out in applause. How cool was that? As Jeff Baffo has said, "DCC events always seem to have it right!" 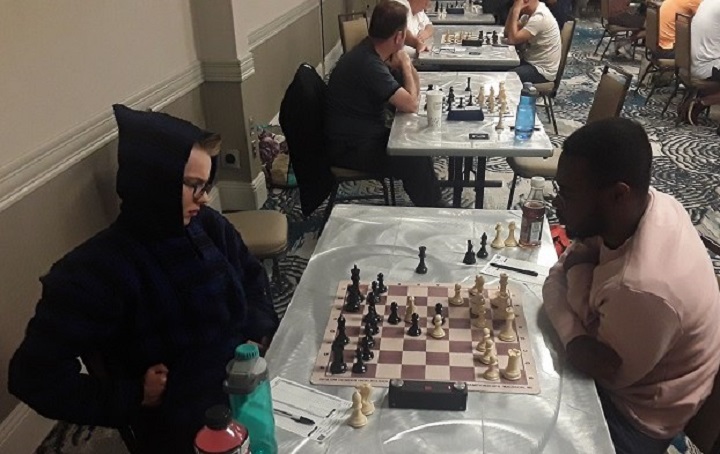 And that will be quite enough DCC hype. Let's get on with who won what in this tournament. First, as opposed to last month's Open section, Brian Wall was pleased that this time "his" section was much stronger with the presence of  Griffin and Sullivan McConnell, Rhett Langseth, and several strong Class A  players. In a way, Mr. Wall was fortunate that it was only a 3 round tournament. He was again held to a draw by Dr. Mirza Peljto in the 1st round, won against Turpana Molina (rated 1595) in round 2, and thus had to win against Rhett - who everyone knows is hard to beat - in the last round to score 2.5 points. In no way am I disparaging Mr. Molina's rating. He had a big upset win against the much higher rated Anthony Whitt (1989) in round 3. and gave Mr. Wall a good game. So clearly Mr. Molina can play. See diagrams #9, #11, and #12 below 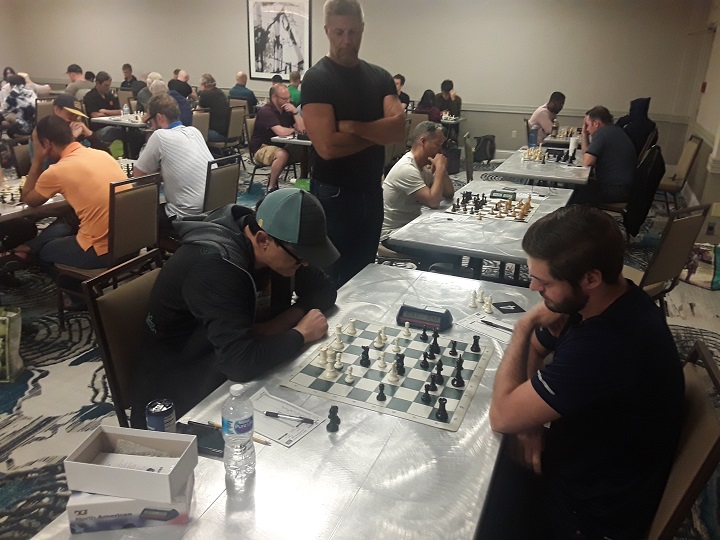 Meanwhile, as usual the McConnell brothers were mowing down their opponents, and were forced to play each other in the last round, as no other player in this section had 2 points. They quickly played to a draw and thus shared the combined 1st, 2nd, and 3rd place prize of 450 dollars with Mr. Wall. I should mention that last month Brian said Mark Brown (1720) plays way better than his rating. In this tournament Mr. Brown proved that to be a fact by drawing Mr. Langseth and upsetting Dr. Peljito. I am hoping the DCC starts adding an Upset prize in each section for all of our tournaments instead of just on Tuesday nights. 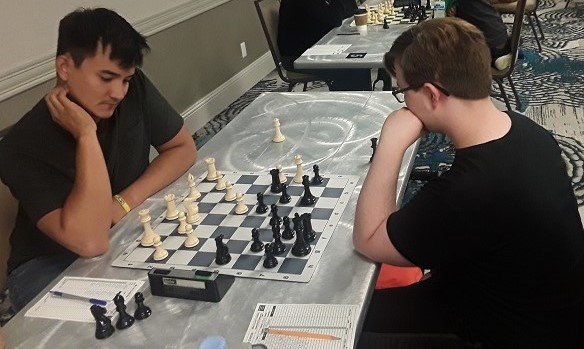 There was also a 3 way tie for 1st place in the U1900 section. It is no surprise that Phil Brown and Andrew Eskenazi each won all their games as they are both studying and working hard on improving their game. But looking at Nathan Biesterfield's 1184 USCF rating I don't think anyone would have expected him to also go undefeated. Well, he not only won all his games, but he did it by upsetting much higher players. In our 1st round game he completely outplayed me  in a Knight and pawn endgame. In round 2 he upset Alayne Wilinsky, who everybody knows is no slouch. Then to win against Jeff Baffo in the last round is just extraordinary. The combined rating point difference between his and his opponents ratings was an astonishing 1455 points. Congratulations Mr. Biesterfield. See diagrams #1, #2, #13, and #14 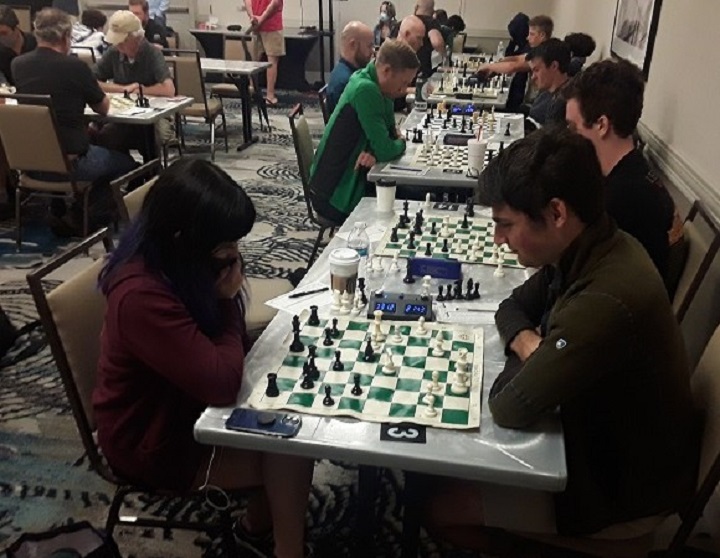 Alayne Wilinsky with the Black pieces against Nathan Biesterfield

The combined 1st, 2nd, and 3rd place prize earned each of these players 116 dollars and 67 cents. Speaking of upsets, I also had the honor of being upset by Danny Hunter who Queened a passed pawn long before mine was anywhere near the promised land. C'est la vie. In the above photo the empty chair is me losing to Mr. Hunter :) 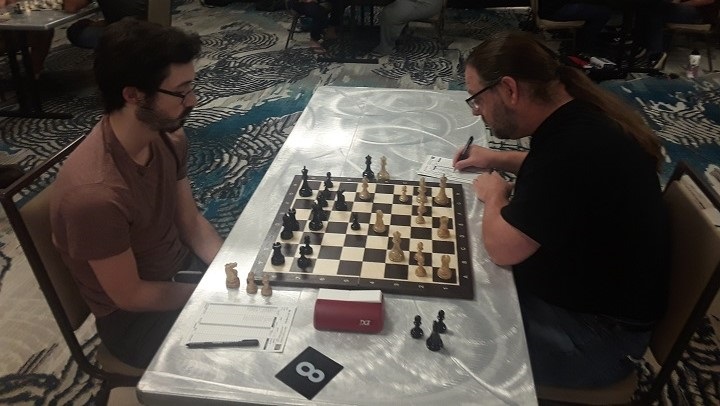 Not surprisingly that there was also a 3 way tie for the combined prize money in the U1500 section. Jason Mellinger, Garrett Lycett, and Ian Andersen all finished with 3 points and they each win a cool 100 dollars. Chess tournament prize money let's you spend the day doing what you like to do and win money doing it :)

Mr. Andersen pocketed his share of the prize money in an unusual way since he had to play two extra games. First he was given a forced bye in the 1st round and played an extra game against a forced bye from the Open section. Which he lost but nevertheless got the full point due to his bye being forced. diagram # 4 and #10 He played well and won his 2nd round game over the board, Then his 3rd round opponent didn't show up so he was given a forfeit win point. He then went on to gain some rating points by winning his second extra game. Three points is three points, and I imagine Mr. Andersen is happy to pocket the C-note. 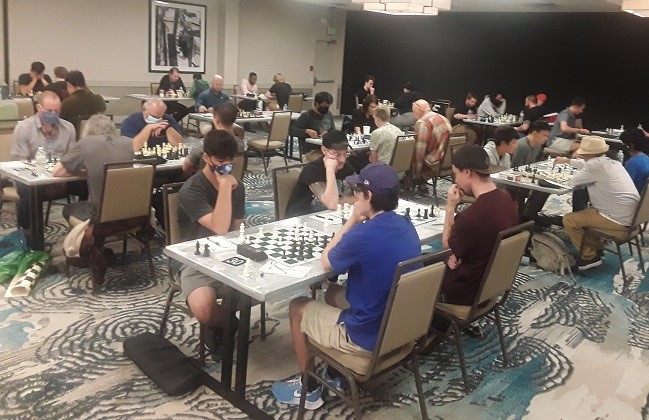 Throughout this report I may seem to have been implying that unrated or low rated players are beginner's and not likely to play chess well. Back in the days before the Internet - yes, youngsters there was such a time - that may have been true. Now with online lessons, the ease of studying, chess engine analysis, and the sheer number of games you can play against strong opposition, a player can get real good without ever playing a USCF rated game. Still, as mentioned above, winning a live over the board game is not only more intense but also way more satisfying than a win against an anonymous internet opponent. Not to mention the big bucks you can win at a DCC tournament :) 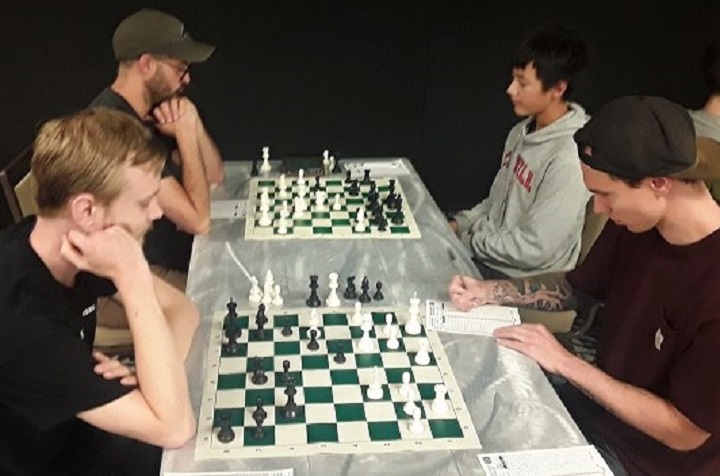 DCC Treasurer, Meint Olthof, is the proud grandfather of Lincoln Olthof, in the background on the right.

I didn't recognize several of the names mentioned in this report, and I'm glad about that, because I think it means they are all new to rated tournament chess. We will be glad to have them, and all new players, at future DCC tournaments. And of course we would like them all to play in the monthly Tuesday night tournament games.

The Games section is much improved for this report. Diagrams #1 thru #10 were selected by Tournament Director, Andrew Starr. He intends to upload all the games from the tournament  to a Chess.com database . How cool is that? Real cool, I say. Of course not all carbon copy score sheets can be deciphered, but he already has like 60 games entered. Just awesome. Positions and comments are by Mr. Starr and his solutions are given after Diagram #10

1) Jeffrey Baffo – Nathan Biesterfield, round 3. What move does black have here to win instantly?

2)  Nathan Biesterfield – Alayne Wilinsky, round 2. White is already up a pawn and is nursing a significant advantage. However, how can white win even more material here?

3) James LaMorgese – Mike Kilian, round 3. Here, what move did black play to immediately get a winning position.
4)  Ian Anderson – Turpana Molina, round 1. Here, black has sacrificed a piece to create mating threats around white’s king. Here, white played 25.Ng3, losing instantly. Instead of 25.Ng3 what move could white make to play on?

5) Mirza Peljto – Rhett Langseth, round 2. How can black win a pawn here?

9) Turpana Molina – Anthony Whitt, round 3. Find the mate in 3 for white to finish off a fine attacking game!

Solutions to the above games as given by Andrew Starr.

No DCC report is complete without a couple of Brian Wall games...

11) Brian Wall vs. Turpana Molina. After 29. b5 Brian Wall says, "My King is totally safe in the bunker, Turpana's King is running through an artillery range." Using the opponent's pawn for defense, while Brian begins his onslaught on the Queenside. What a concept.

12) Rhett Langseth vs. Brian Wall. The Super GM has just grabbed a pawn with 15...Nf6xe4. What was his intended reply if Rhett had played 16. Qxe4? Easy answer at the end of this report.

...and a couple of Phil Brown games.

14) Phil Brown vs. Alex Stiger This is another nice attacking game that Mr. Brown played at the CSCA Class Championship tournament. White to move. How would you play to begin an attack in this position?

Congratulations to all the prize winners and thanks again to all the players who made this such a great tournament, Thanks to the tournament director, Andrew Starr and his assistant Brian Ledsworth. THey ran the tournament with great efficiency. Thanks to the DCC Treasurer, Meint Olthof. No DCC tournament happens without Mr. Olthof making the hotel arrangements and approving the generous DCC prize fund payout.

Diagram #12 Answer: Brian would have, of course, played 16...Rb4 regaining the piece.