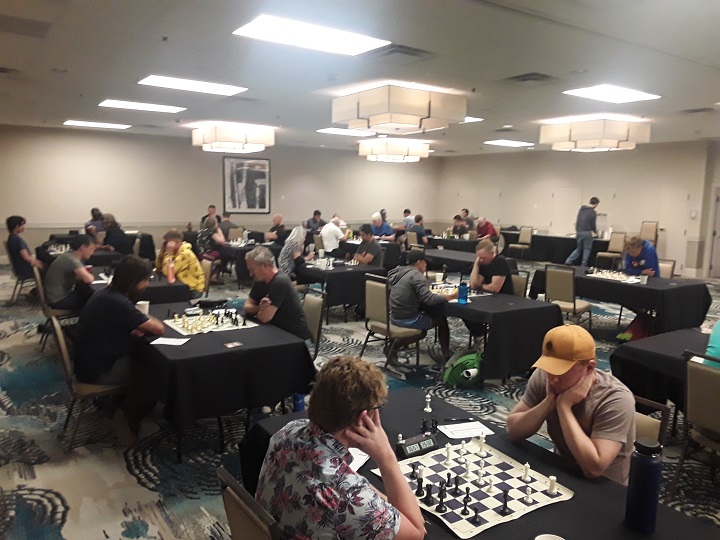 "In any case, DCC events always seem to have it right!"

Yahoo, Yipee, Yabba dabba doo, Hot diggity, Hooray and Hallelujah. After 15 months of only internet chess, the Denver Chess Club finally had a live over the board nearly normal tournament. I was jumping for joy, up until I lost all three of my games by playing really bad moves in winning positions. I plan to avenge myself in the DCC Almost Normal Tournament coming up on Saturday, July 31st. Good news is the Embassy Suites has removed their social distancing requirement. Thus the registration for this tournament will be unrestricted. Although we are still allowing online registration only . More good news is the DCC is starting up our regular monthly Tuesday night  tournaments beginning August 3rd. There will be no limit on the number of players on Tuesday nights. Unless we run out of tables and chairs :-) 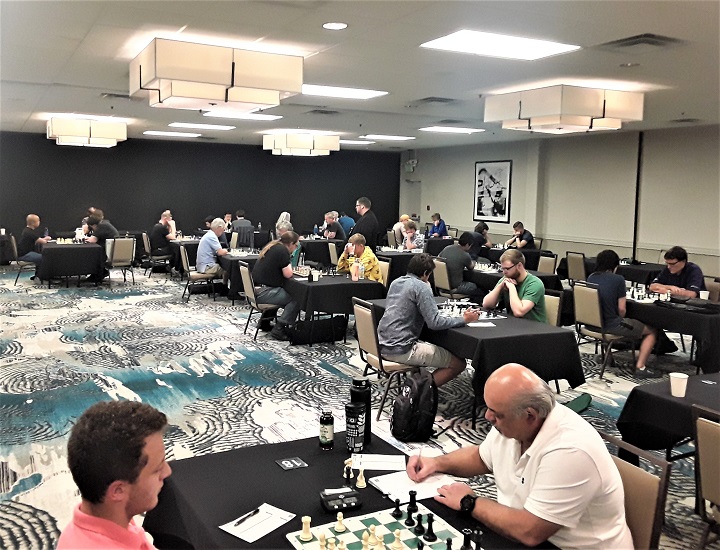 Our room at the  Embassy Suites was excellent. See Jeff Baffo's comments below.

The DCC will continue to require a full COVID vaccination for all players until the CDC, the Colorado Governor, the President of the United States, and God declare that the COVID danger has passed. We are making progress towards that end here in the U.S. but the vaccination rate is slowing and we are falling short of the 70-80% of the population vaccinated  goal. I understand and respect refusing to be vaccinated due to a religious belief or because of a medical condition, but not for any other reason or excuse. To me an attitude of, "it's all about me and my personal freedom" indicates you are not concerned about the health and well being of others. Players that have already shown us a vaccination card, and signed the DCC waiver, will not have to do so again. Thank you. 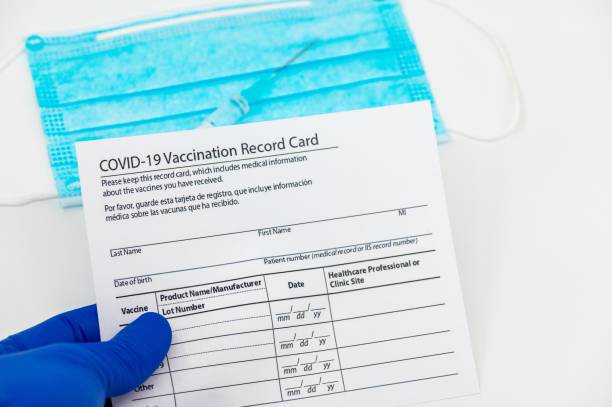 The truth is the COVID danger becomes less and less when more and more people get one of these .

David Costantino, is the organizer of the Denver chess meetup group . Quoting Mr. Costantino from his COVID policy statement: "...WE EXPECT ANYONE WHO ATTENDS OUR MEETUPS TO BE FULLY VACCINATED...This is not only to keep each other safe, but also out of respect for the staff and other guests at the venues where we play. We don't want to be the reason that there is an outbreak somewhere...". Saying exactly why the DCC is also requiring all players to be vaccinated. Also quoting Elizabeth Shaughnessy - Founder and President of the Berkeley Chess School . "We will continue to require that every player is vaccinated and if you have not already emailed or shown me your vaccination card you must do so..."

Eventually I hope to be able to write one of these DCC reports without having to mention the damn pandemic, or type the COVID acronym. So without further ado let's get onto the actual summary of the DCC Nearly Normal tournament. First, here is what Jeff Baffo, a long time Colorado chess tournament player, had to say about the tournament on his Facebook page: Quoting Jeff Baffo: (I couldn't resist putting what he had to say about the DCC in bold print)

"This 3 round, one day event, was aptly named the "Nearly Normal" tournament and was put on by the venerable Denver Chess Club. Time control was game in 55 with a 5 second delay. For quite some time now the DCC has put on quality events. Even long before the Disease that shall not be named hyperbole-ed into our lives, you could count on DCC tournaments being very nice events. And yes it's still with us, still causing us pain, this overblown, self-absorbed, a-hole of a microorganism that it is, the players had a couple hoops to jump thru; there was a vaccine passport check ("Papers, please!") and also we all had to sign some ^@%@$@ waiver that I didn't even read. Truth be told all the tournament COVID stuff is only done to try and keep us safe.

I will stop my whining here and fully admit that said precautions were only a passing breeze in the grand scheme of things.  In any case, DCC events always seem to have it right! A decent physical location, good lighting, seating, tables, amenities. The Embassy Suites on Hampden might not be the Brown Palace, but it's clean and comfortable with some of the best lighting I've played under. Meint, JC, Earle & company did a quality job. Bravo, good sirs! This writer made it in off a stand by list when someone else dropped out. Because of the aforementioned and still ongoing COVID boorishness, the event was limited to 50 players. Here's looking forward to return to full capacity tournaments soon!" 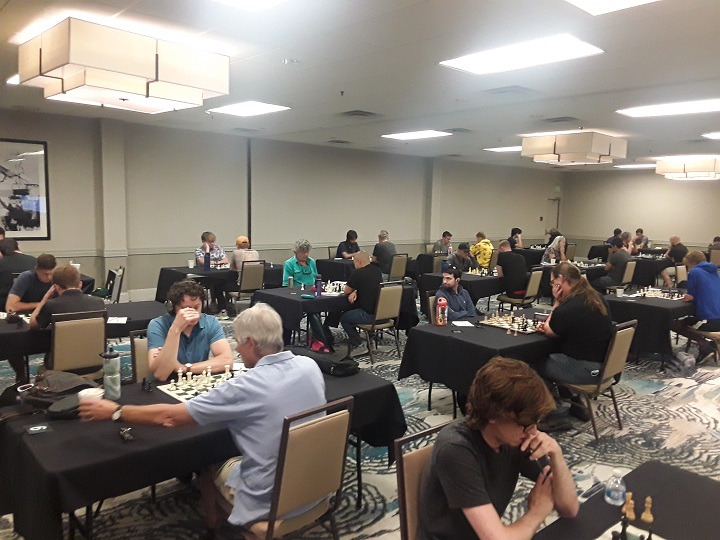 Since the hotel has dropped their social distancing requirement, the room can easily hold 100+ players. Hopefully we'll see that number at the DCC July 31st tournament, or as Mr. Baffo says, have a full capacity.

"On to the chess. My section was the U1900 and I finished two wins one loss. My loss was to a feloniously underrated Christian Almazan. I passed up a 3 fold rep draw and got mated. Shouldn't be so stubborn! My last round game saw my opponent fall into a book trap and resign after only 5 moves. (see diagram #14 below) Holy Frijole that was some perverse fun! Click and move game links to follow. To all my chess homies I say this; GET BACK TO THE BATTLEFIELD!" - Jeff Baffo. Thank you kindly Mr. Baffo

We had an excellent registration for the U1900 and U1500 sections. With many new and/or unrated players playing. But only 4 players were in the Open section: Brian Wall (2200) - Marza Peljto (1906) - Mark Brown (1720) - and Kamron Correia (Unrated). Maybe we should have combined these players with the U1900 section. Although putting a big shark (we all know who I'm talking about) :-) in that section would have I think been unfair to the other players in the section, with regards to winning prize money. As it was, Dr. Peljito held the shark to a draw and thus also scored 2.5 points and they share the combined 1st and 2nd place prize of 244 dollars. NM Wall gave credit to Mr.Brown. Saying he  played well above his rating. "More like a 1920 player". (diagrams #1 thru #8)

Marza Peljto with the Black pieces playing a good game against Brian Wall.

Three players tied for 1st place in the U1900 section: Andrew Starr - a former DCC Tuesday night Tournament Director and TD for the upcoming July tournament - along with Ted Doykos, and Charlie Flaxbeard. They all finished with perfect 3 point scores and share the combined 1st, 2nd, 3rd place prize of 236 dollars. (diagrams #11 - #12 - #15) 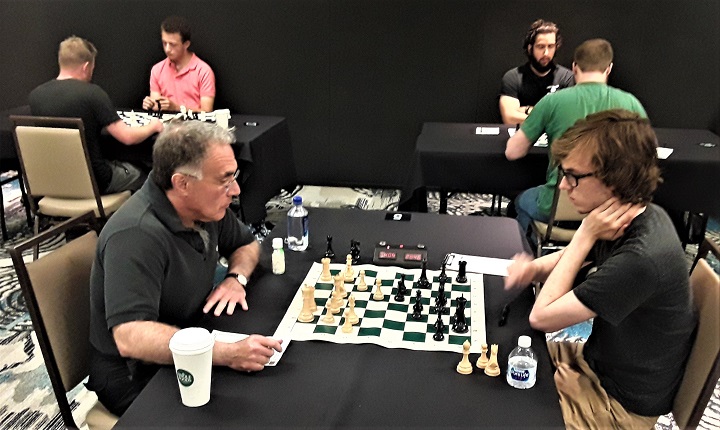 Andrew Starr with the Black pieces against Jeff Cohen

I think that Ken Doykos' son, Ted, is improving by the game. Charlie Flacbeard has been playing regularly in Alayne Wilinsky's DCC Tuesday nights on Lichess. I thought I was going to have my revenge against "SunBear69" for the thrashings he has been giving me online, in our 1st round game in this over the board tournament. And I was up until I had to give up my Queen to prevent the self mate I played into, and it went downhill for me from there. What can I say :-( 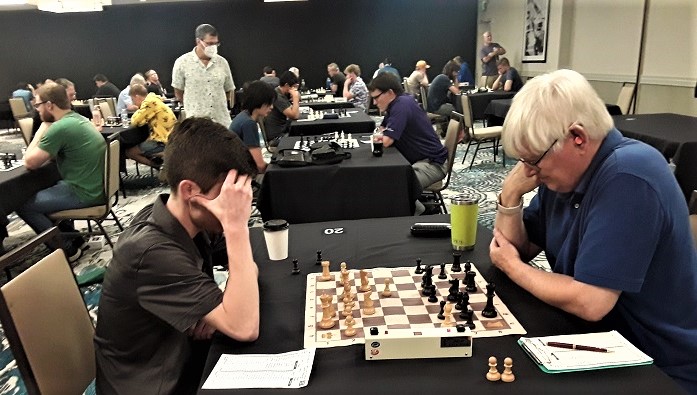 I only recognized a couple of players in the U1500 section. One was another long time Colorado chess player and former CSCA Treasurer, Dean Brown. I think Mr. Brown has played in a chess tournament in every U.S. state, or he intends to. I of course also know long time DCC player, Brian Ledsworth who was the assistant TD. He played a couple of fill-in rated games so that a player wouldn't have to take a bye. Without Mr. Ledsworth's technical expertise in setting up the online registration, this tournament would not have happened. 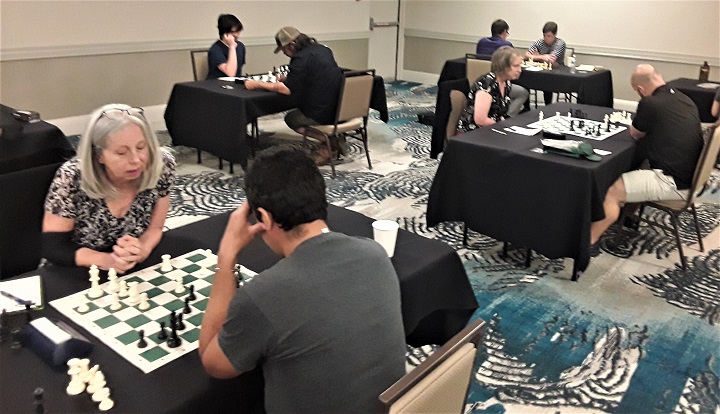 Ann Davies with the white pieces.

Good news for Ann Davies (diagram #10) is there may finally be another regular female player at DCC tournaments. Christy Bullock is a registered nurse who has been on the front line at a Denver area hospital in the battle against COVID. Ms. Bullock is enthusiastic about improving her game, and knows that playing rated tournament chess is the way to go about that. She intends to play whenever she can.  The DCC salutes all the health care workers who have risked their own health to care for COVID victims, and others in need of medical care. 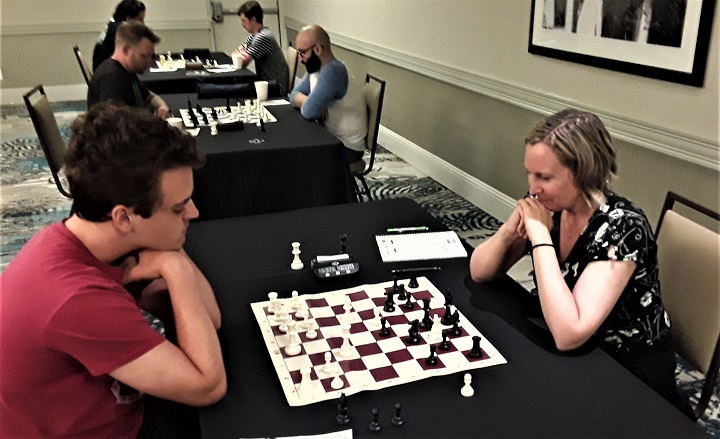 Tyler Poole (diagram#13) and Ryan Chmielewski had perfect 3 point scores and they share the U1500 combined 1st and 2nd place prize of 189 dollars. There was a massive seven way tie for the 3rd place prize of 47 dollars. William Hensley, Dean Brown, Lev Shulman, Joel Henry, Gavin Buu-Doeer, Scott Jackson, and Baillie Weil all win a whopping 6 dollars and 71 cents.

Congratulations to all the prize winners. How refreshing it was to see so many new players at a DCC tournament. i hope this tournament whetted their appetite for "real" chess. 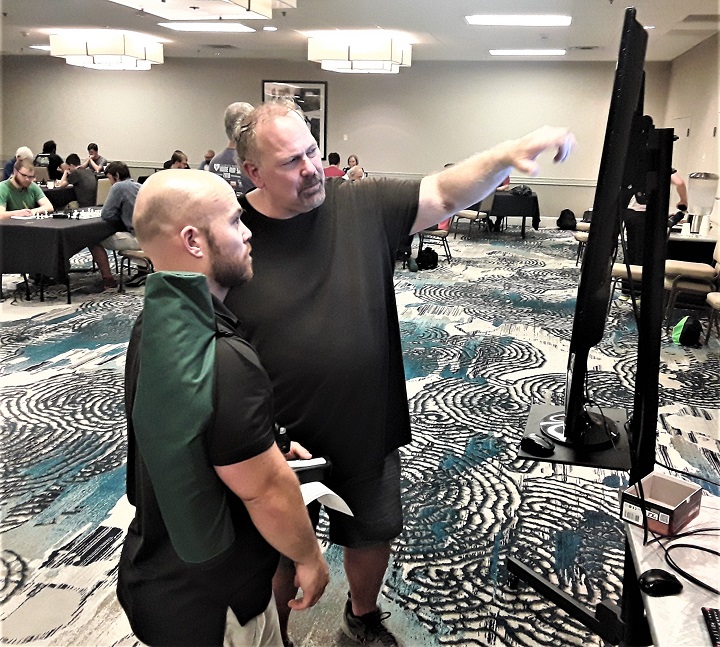 TD Earle Wikle explaining things to one of the new players.

First, let me just say that deciphering carbon copy scoresheets is grueling :-) Thanks to Jason McEwen for posting his game (diagram #9) and It's a good thing Brian Wall always uploads his games to DCC Games. We'll start out with an instructive series of positions from Brian's game against Mark Brown.

1) Mark Brown vs. Brian Wall Round 1. Is 12 ...Rxa4 a good move? In this and the following diagrams NM Wall criticizes his moves. His comments on each position and what should have been played are given after diagram 8.

6) The same game 37... Nd2-b3 The last triple ??? move before NM Wall finally manages to win the game after some further help from his opponent.

7) Brian Wall vs. Mirza Pelijto Round 2. In this position Mr. Wall played 30. Kh2. Regretting that he missed several winning moves. When playing over the game, think also about a better move 12. and move 32. Brian's answers are given below the next diagram.

9) Jason McEwen vs. Chris Burkhardt Round 2. I'm so glad when players upload there games to DCC Games. Even better when they provide instructive annotations. Thank you, Mr. McEwen. How does White win material in this position?

10) Ann Davies vs. Alberto Medina In this position Black plays 28...Rc5-c3 Why was that not a good move? I believe someone said Mr. Medina has a FIDE 1600 rating That probably translates to a USCF 17-1800 level.

11) Ted Doykos vs.Christian Almazan Round 3. Find the combination that wins material for White. This is an interesting game from the start. Well worth your time to play over.

14) Jeff Baffo vs. Meint Olthof  Round 3. Find the move that forces Black to resign. Mr Baffo knows and plays many tricky opening traps.  I hope Meint doesn't kick me out of the DCC :-)

15) J. C. MacNeil vs. Charlie Flaxbeard Round 1. I think it's safe to say I'm winning in this position if I just move out of check. Instead i play 34. Nc3-c8?? Do you see why that was a losing move? My other 2 games in this tournament were just as badly lost. Maybe i should be kicked out of the DCC :-) (Note in the game heading, the players ratings are switched. I will no longer be a 1700 player and Charlie Flaxbeard is certainly not a 918 player)