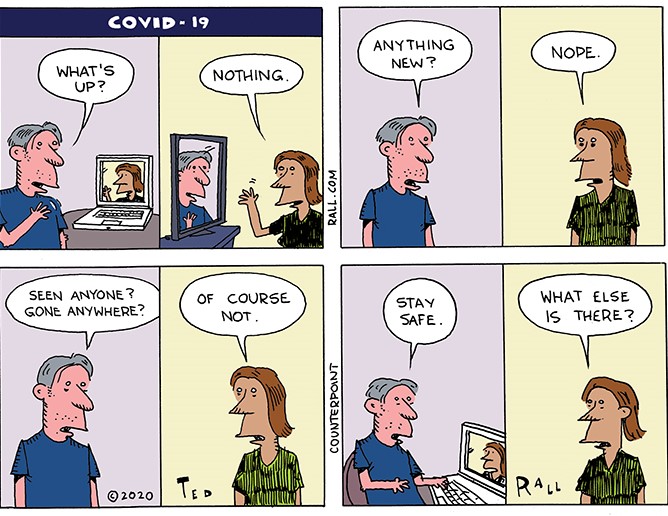 ... but I am holding out hope that we can have the DCC Fall Classic.

It's been nearly a full year since the Denver Chess Club has met in person for over the board chess. I remember how we were all thinking we would be able to play the last 3 rounds of the 2020 March tournament in April or surely in May. And be back to our regular monthly tournament in June. Everybody knows that didn't happen. The 2020 Denver Open - that was destined to surpass the incredible 2019 Denver Open - was scheduled for mid May also regretfully didn't happen. 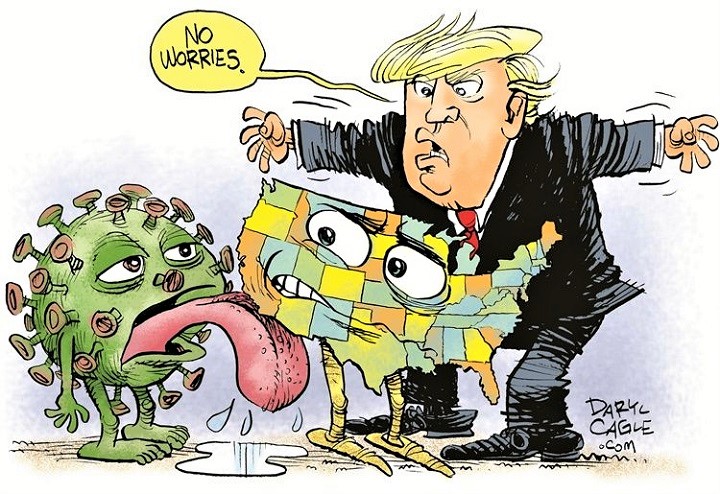 "I'll tell you a coronavirus joke now, but you’ll have to wait two weeks to see if you got it."

A complete and utter lack of a coordinated federal and state response to the danger of the coronavirus allowed the virus to spread across the entire country with astonishing speed. Then the typical American arrogant attitude of "nobody is going to tell me what to do" with regards to mask wearing and social distancing didn't help. With the United States now over 500,000 deaths and countless people suffering serious medical complications, we are still resistant to social distancing and the simple requirement of wearing a mask in public. Stunning is the fact that the combined total of U.S. soldier deaths from both World Wars and Vietnam - wars that went on for years - is less than the total of COVID deaths we have had in just one year. 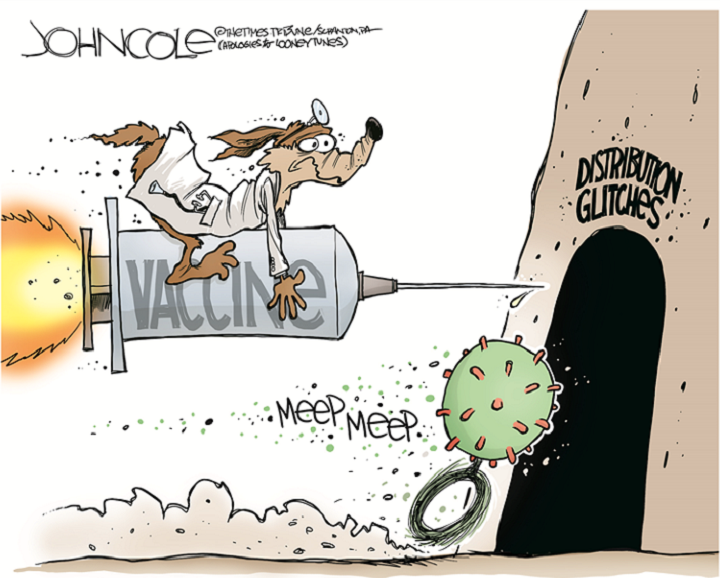 "How did the health experts lie? They said a mask and gloves was enough to go to the grocery store. When I got there, everyone else had clothes on."

With the Biden administration replacing a leadership vacuum in the White House and pushing a coordinated effort to make the vaccine available nationwide, in addition to other pandemic control measures, we can hope the tide has turned. And already it seems deaths and hospitalizations are finally tapering off. My understanding is when 70-80% of the U.S. population is vaccinated, herd immunity will have a chance of bringing the virus under control and some semblance of normal life will return. Perhaps this is wishful thinking, due to the fact that reportedly 50% of the population is leery of the vaccine or will flatly refuse to take the shots. Meaning herd immunity is less likely to happen. Also in the meantime, a virus variant that the vaccine is ineffective against could appear. There is still so much uncertainty about everything COVID. 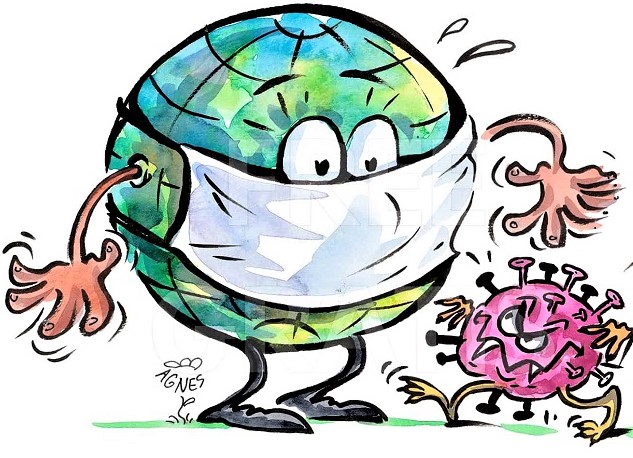 "Who’s idea was it to sing “Happy Birthday” while washing your hands? Now every time I go to the bathroom, my kids expect me to walk out with a cake."

So as it stands, even in the best case, normal is a long way off. Apparently the required percentage of the population could possibly be vaccinated by June, if the anti-vaxxers overcome their fears for the good of us all. Then allowing a couple of months to reach the magical herd immunity status, we could be playing live in person chess in August or September. We can only hope. 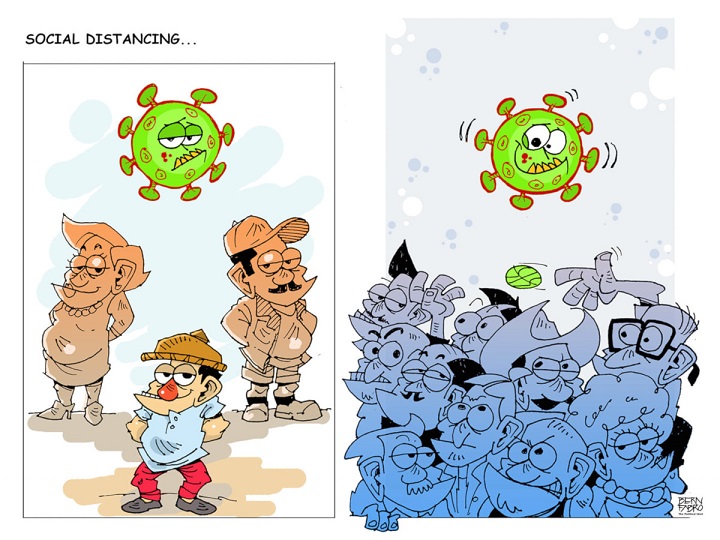 "I never thought the comment “I wouldn’t touch them with a six-foot pole” would become a national policy, but here we are! "

I was really sorry that the DCC could not stage our annual Tribute to Martin Luther King tournament this year, but I am holding out hope that we can have the DCC Fall Classic. Maybe even a December Denver Open. Not to mention returning to the Tuesday night tournament games. And to continue being optimistic, hopefully the CSCA can stage their traditional Labor Day weekend Colorado Open. The DCC is thinking about having an outdoor tournament this Spring or early Summer in a Denver area park. Maybe require proof of vaccination and/or mask wearing. Maybe a one day quick rated tournament. Any readers' thoughts on this idea are welcome. 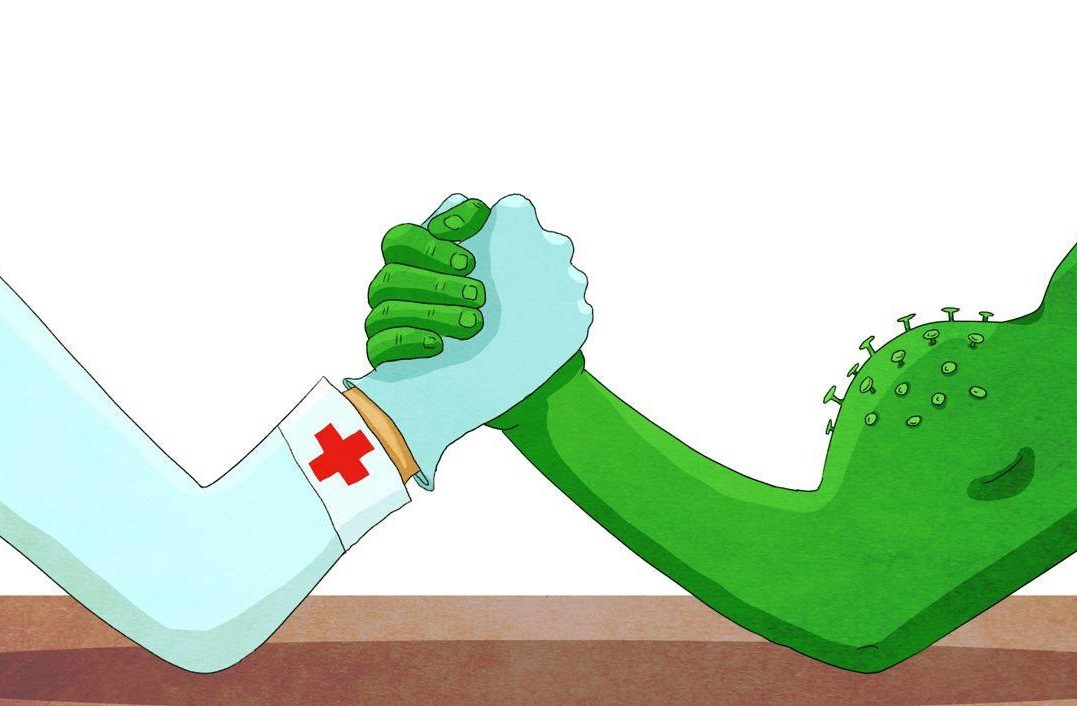 Lets all be thankful for the medical professionals. In particular, hospital ICU nurses. They are all under high stress and strain, yet still show up day after day and do all that they can to care for COVID affected patients.

Cartoons and the joke captions are from a Bing free to use search. I used them in this DCC report even though there is nothing at all funny about the pandemic.

In the absence of any DCC over the board tournament games to highlight, the Games Section is again all DCC on lichess games. SANS-VOIR is Gunnar Andersen's lichess blindfold account handle. Meaning he played the following lichess tournament games looking at a blank chess board without sight of the pieces or the move list. In addition the G/3+2 time control meant he was playing blindfolded at a blitz pace !!

1) SANS-VOIR vs. fleetfeet  (Mark Krowczyk) Black has just played 15. Nf6-d5. Can you find the mating attack with your eyes closed?

2) acmurane01   (Archer Murane) vs. SANS-VOIR  Archer had dropped his Queen to a knight fork early and from this position Black has a mate in 5. Again, can you close your eyes and play like Gunnar Anderson?

4) BrianWall vs. SANS-VOIR In this probably drawn position, Brian is down to 33 seconds. Incredibly Gunnar still has 2 minutes and 50 seconds on his clock (remember it's a G/3+2 time control) In this position, Mr. Wall played 35. Rf4-e4. Why was that a bad move?

6) SANS-VOIR vs BrianWall  Just to show Gunnar is not invincible when blindfolded. What does Mr. Wall play in this position to win?

7)  SANS-VOIR vs. fleetfeet   Mr. Krowczyk also took advantage of a blindfolded mistake by Mr. Andersen. Gunnar has just grabbed a pawn with 28. Re1xe3. Why was that a losing move?

8) fleetfeet (Mark Krowczyk) vs, BrianWall  Earlier Mr. Krowczyk had sacked the Queen for 2 rooks. Usually a good trade but not when Pawn Wave Guy can march pawns down the board. Why did 30.Kg1-f2 eliminate all hope for a defense?

9) SunBear69 (Charlie Flaxbeard) vs. BrianWall Once again Pawn Wave Guy has too many pawns. Observe the endgame Master use his smooth technique to score the full point.

Mr. Wall continued his winning ways to take 1st place two weeks in a row with these fine games. This tournament was with a G/10 time control. Alayne is changing the lichess tournament time control weekly, Making some of the players happy some of the time :-)
10) BrianWall vs devilrox  White to move. Play like Brian Wall and find a mate in 5.
**Now that I've been made aware there is a Mate in 1 in this position, this caption should read: Instead of mate in 1, play like Brian Wall and find a mate in 5. It's of some solace that this had to be pointed out to Brian also  :-)
11) Czechmate1972  (John Brezina)  vs. BrianWall Find the move that compels White to resign. Remember that the player of the Black pieces is known as Pawn Wave Guy
12) BrianWall  vs. PseudoQuasi  (Alayne Wilinsky)  Mr. Wall shows no mercy... ever. Even against the organizer of the Lichess tournaments. After 28...Rc8-f8 - which may have been a mouse slip - find the winning move that Mr. Wall plays now.
13) Thursday (Tom Colbert) vs. BrianWall  With the exposed Black King it looks as if White may have some chances. Find the move that Mr. Wall plays that ends all of those dreams.
14) Brian Wall vs. devilrox  Once again we see Pawn Wave Guy doing what he does best. Overwhelming an opponent with pawns. Black lost on time in this hopeless position. To be fair to Mr. Zelkin, he has played Mr. Wall 13 times on LiChess and won 5 games. Not a bad score at all against one of Colorado's best players. Witness the next game.
15) Brian Wall vs. devilrox   In this position Mr. Wall with only 4 seconds on his clock plays 51. Ne5xc6 and Pawn Wave Guy gets pawn waved, How would you continue as Black after White's move? Mr. Zelkin will be a welcome addition to the DCC when we begin meeting in person again.
16) Chechmate1972 vs. Bozhenoff (Alexandr Bozhenov) John Brezina is really improving his game. His lichess rating has jumped over 2000. After fending off a strong attack from Mr. Bozhenov, Mr. Brezina counter-attacked to reach this position. Does Black have a defense? 40...Qb3-e3+ didn't work.
17) PseudoQuasi vs. Chechmate1972.  White has just played 25.Qd3-c4. Why was that not a good move? Alayne has vowed to have wins to show in the next report, and I'm sure she will.
I can't tell you how much I would like to insert a definite date in this space as to when the DCC will be playing live over the board USCF rated tournament chess again on Tuesday nights, and when we will have a weekend tournament scheduled. But it beyond my ability tp predict. I am encouraged by the actions the Biden administration is taking. So there is hope for sooner rather than later.
Thanks to all,