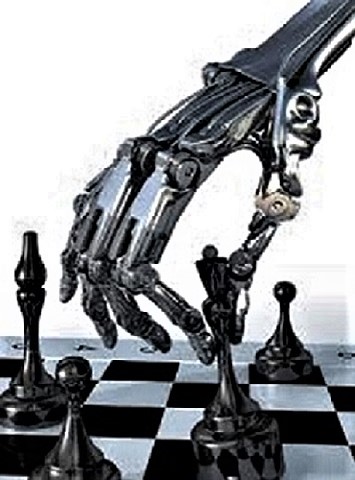 ...and thanks to all the new players who are making the DCC a thriving, vibrant chess club.

I saw an NBC online news article   by Jason Abbruzzese and Kalhan Rosenblatt. "Fast-and-loose culture of esports is upending once staid world of chess". It is news of how online chess streaming is attracting more and more players to chess. Mainly the article is about Alexandra Botez. A young enthusiastic live streaming chess player. I've put together some quotes from the article. "She holds the title of Woman FIDE Master and was the first female president of the Stanford University Chess Club and is one of the best players in Canada"..."and while chess is far smaller as an e-sport than video games, it has grown quickly. On Twitch, the most popular internet platform to live stream esports, time spent watching chess has risen by more than 500 percent since 2016"..."it's also giving new life to one of the oldest games in the world." 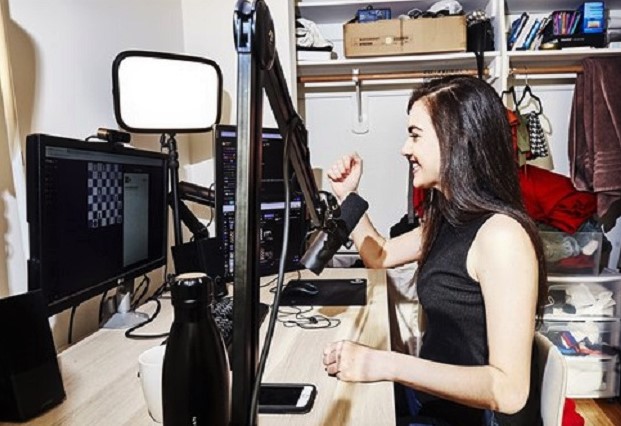 Ms. Botez says, "It was never something I would have imagined would have grown to what it is today."..."Some of her most notable live-streamed matches - and most entertaining trash talk - have come against grandmaster Ben Finegold."..."Chess should be fun, too," Finegold says. "It doesn't have to be super serious all the time."..."GM Eric Hansen first used the term "Chessbrah" in 2015 as an online alias ...Chessbrah now has six full-time programmers for its Twitch and YouTube channels ...selling hoodies, T-shirts, and hats ...encouraging people to join the new chess culture." 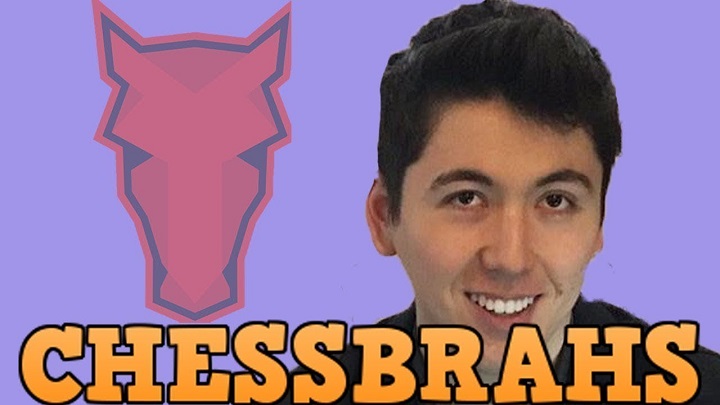 "...the prospect of streamers' attracting more people to the game and providing a way to engage with it more often could open the door to more sponsorship money, which has generally been hard to capture"..."And some major chess tournaments have shown the potential to turn into major events. Twitch said the 2018 World Chess Championship attracted 4.4 million unique viewers" Please take the time to read the full article . Then go to Brian Wall's apartment and live stream some chess promotion. You can see from this video clip that Brian needs some help with his production :-) I should definitely mention that Colorado's own Sara Herman has a successful twitch channel with a substantial following 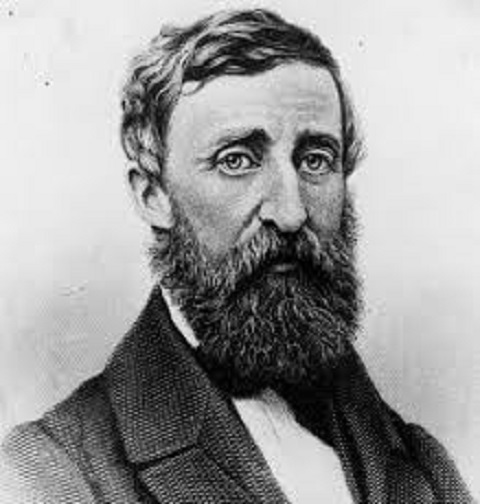 It might be said that Henry David Thoreau was a deep thinker, and I'm sure he played chess.

I also happened to see a fishing quote by Henry David Thoreau and thought it could just as easily be about chess by substituting a chess word or phrase for the fishing words. So I amused myself by looking up fishing quotes and doing just that. In all the following, the substituted chess phrase is in bold print, and the word or words it replaces is in brackets after the quote. Followed by the author's name.

"Many men play chess all their lives without knowing that it is not a game they are after." [ go fishing ]  [ fish ] -Henry David Thoreau.

"Lots of people committed crimes during the year who would not have done so if they had been playing chess. The increase of crime is among those deprived of the regenerations that impregnate the mind and character of the chessplayer." [ fishing ] [ fisherman ] -Herbert Hoover 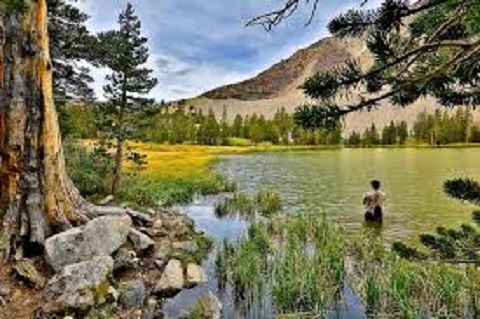 "Soon after I embraced the sport of chess I became convinced that I should never be able to enjoy it if I had to rely on the cooperation of the opponent." [ angling ] [ fish ] -Sparse Grey Hackle

"A combination in chess is a moment of beauty known only to those who seek it." [ trout ] -Arnold Gingrich

"In these sad and ominous days of mad fortune chasing, every patriotic, thoughtful citizen, whether he plays chess or not, should lament that we have not among our countrymen more chess players." [ fishes ] [ fishermen ] -Grover Cleveland

"Chess playing is not an escape from life, but often a deeper immersion into it" [ Fishing ] -Harry Middleton 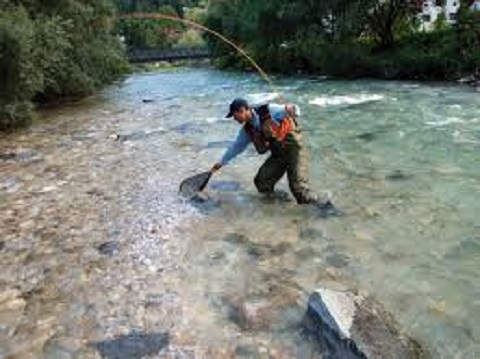 "When you are at the chessboard, you are the closest to the truth as you'll ever get"  [ on the river, ocean or in the woods ]  -Jack Leonard

"The game of chess, once it casts its spell, holds one in its net of wonder forever." [ sea ] -Jacques Yves Cousteau

"The great charm of chess is that we are always learning." [ fly-fishing ] -Theodore Gordon 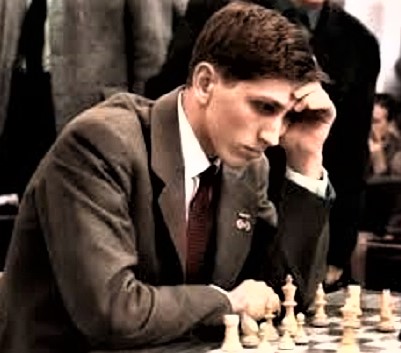 Surprising to me was I couldn't easily do the reverse, and substitute fishing into chess quotes. Other than this one: “Fishing, like love, like music, has the power to make men happy.” [ Chess ]  – Siegbert Tarrasch.

That's quite enough of that. Let's  get on with who won what in the DCC February tournament... 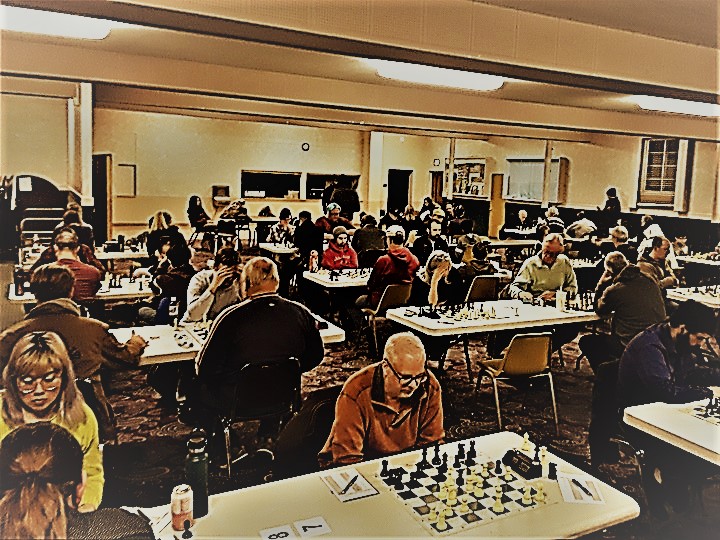 In the Premier section, Brian Wall took clear 1st place with a perfect 4-0 score and won 118 dollars. Do I hear a chorus of hallelujahs? :-) (see diagrams #1 thru #4 below) Encouraged by his return to form, the Grand Poobah of the DCC accepted a challenge from Sullivan McConnell to play a 4 game match. So we will have an extra added attraction on Tuesday nights at the DCC in March. In addition, Griffin McConnell will be playing a match against Earle Wikle, the Champion of the Colorado Springs Chess Club. Two young kids against two old men. I'm betting on the kids :-) 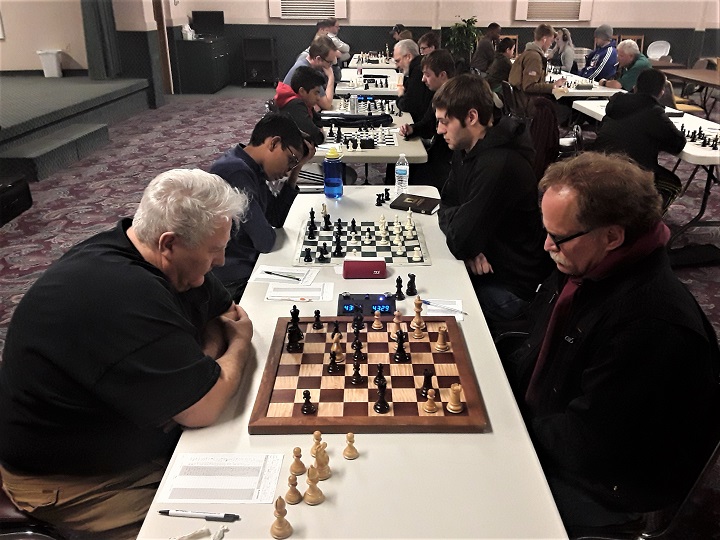 Brian Wall with the Black pieces against Mark Krowczyk.

Mark Krowczyk, shares the combined 2nd and 3rd place prize of 115 dollars with Neil Bahvikatti, another youngster among several that we have playing regularly at the DCC. The 20 dollar Premier Upset prize was won by Vibi Varghese when he held Ricardo Bogaert to a draw in round 3. 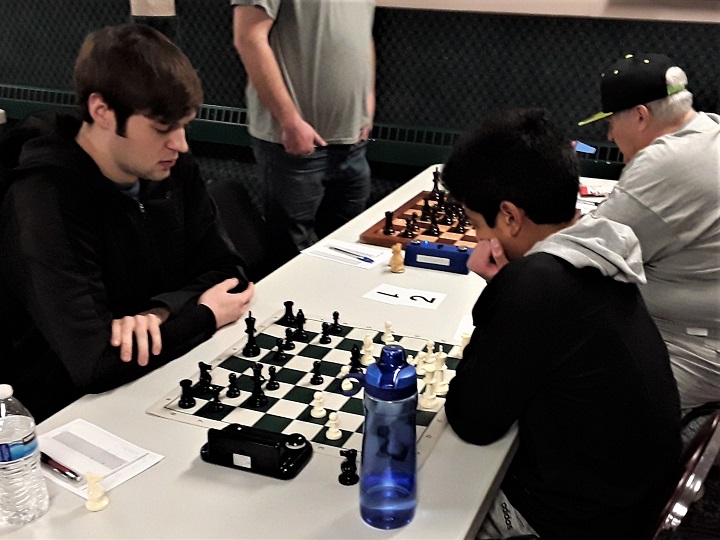 Rhett Langseth has the Black pieces against Neil Bhavikatti.

Jason McEwen had no trouble winning the U1900 section. He went undefeated to also finish with a perfect 4-0 score and won 107 dollars. ( diagrams #5, #7, and #9) I probably didn't need to help him by tossing a whole piece six moves into our last round game. It was good to see Srikar Appana back at the DCC on Tuesday nights. After a 1st round bye, he scored 3 straight wins. Taking the 2nd place prize of 65 dollars, and putting a stop to Alayne Wilinsky's incredible string of wins. (diagrams #6 and #8) In Ms. Wilinsky's first 3 rounds she won against players who had a combined rating point difference of well over 1000 points. Alayne was probably winning against Mr. Appana in the last round, but  in time pressure with a shaky King position, the game slipped away. 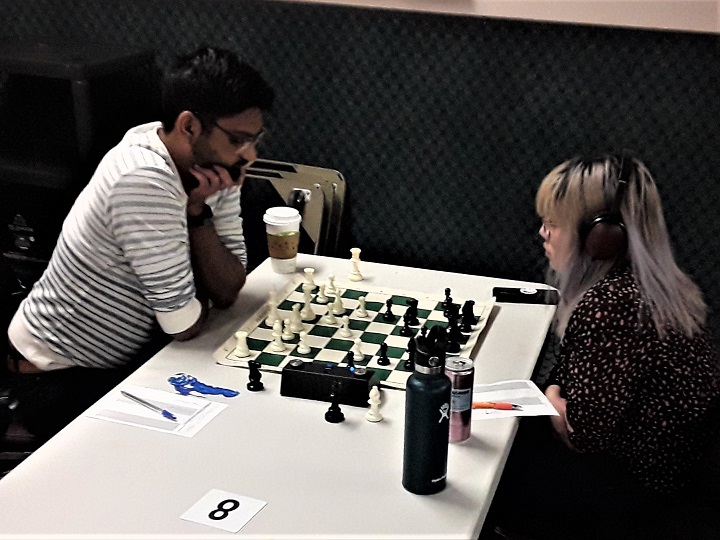 One of the last game to finish. Srikar Appana vs. Alayne Wilinsky

Thus four of us ended up tied for 3rd place. Alayne. Phil Brown, Dylan Goertz, and me. We all finished with 3 points and we win a whopping 11 dollars each. The 20 dollar U1900 Upset prize was won by Qwen Christ for his really big last round upset win against Ken Doykos. I think Owen is less than 15 years old and let's just say Mr. Doykos had his 15th birthday long ago :-) 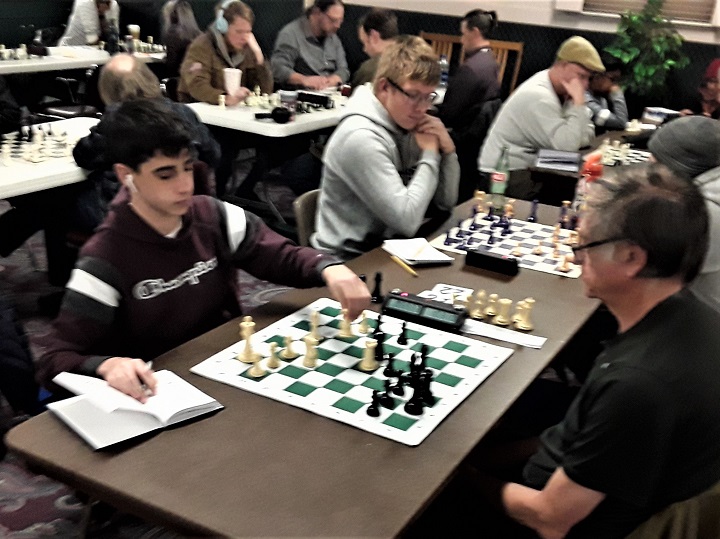 David Pupko making a move in his game against Mark Zeringue .

Mark Zeringue is ruling the U1500 section. This month after a 1st round bye, he finished in clear 1st place with a 3.5 final score and won 107 dollars. Winning against David Pupko in the last round to seal the deal. Three players finished with 3 points, Vyacheslav Pupko, Jason Britchkow, and Iris Li share the combined 2nd and 3rd place prize of 89 dollars. Iris may not even be in grade school yet and here she is winning money playing chess. How cool is that? 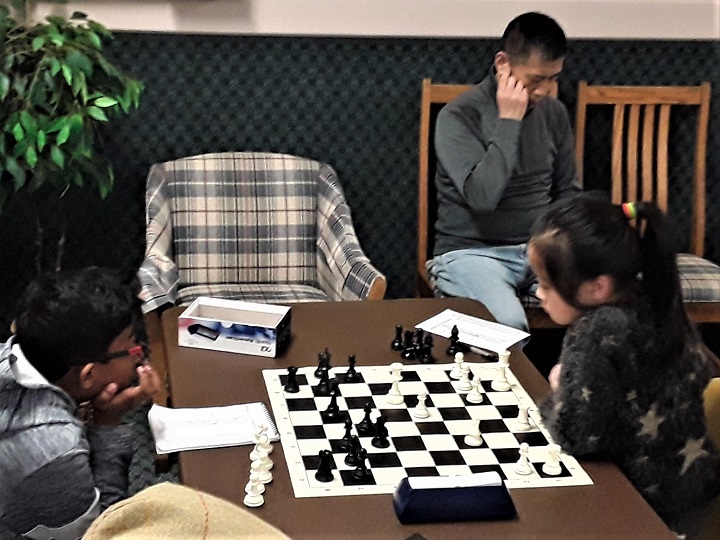 The 20 dollar U1500 section Upset prize of was won by Shankar Parasuram for his big round 2 upset of Petra Lambert-Gorwyn. I'll freely admit that I don't have any idea who Shanker is. There are so many new players at the DCC that I can't keep up. I am sure not complaining. It's great that we are seeing such a wide range of players. Young and old. Men and women. Girls and boys. With young people like Alexandra Botez and Eric Hansen live streaming and promoting chess, it is just going to get better.

Prize winners not pictured above may be in this picture somewhere :-)

Congratulations to all the prize winners and thanks to all the new players who are making the DCC a thriving, vibrant chess club. Note: Prizes previously listed were incorrect but have now been corrected. Was not my fault :-)

1) Mark Krowczyk vs. Brian Wall   Round 1. Final Position. NM Wall has an extra piece and way too many extra pawns. And as would we all, White resigns.

2) Brian Wall vs. Jesse Hester Round 2. Find a good check. Not the hardest check to find, but do you see the follow up?

3) Neil Bhavikatti vs. Brian Wall Round 3. Knight endings are always difficult. but Pawn Wave Guy has an extra pawn. Guess who wins :-)

4) Brian Wall vs. Rhett Langseth Round 4. In this position after 20. fxg6, would you take a draw offer from Brian Wall if you were playing Black?

4a) the same game. In this position Super GM Brian Wall played 26. Qd5. Can you find either one of two much better moves? See Mr. Wall's answer after the last diagram below.

5) Jason McEwen vs. Brian Ledsworth Round 2. In this position Mr. McEwen played Rhg1. Not a bad move, but do you see a better move?

6) Alayne Wilinsky vs. Phil Brown  Round 2. After Phil captured a pawn with 25... Qb6xb3 Alayne played 26.h3. Did she just leave her Bishop hanging? Mr. Brown's comments on this position is something we have all done.

7) Dylan Goertz vs. Jason McEwen. Round 3. What would you play in this position as Black? As always Mr. McEwen's games are well worth your time to play through. His analysis and comments are excellent.

8) Alayne Wilinsky vs. Ted Doykos Round 3. Alayne played very well to reach this position against a strong player. Ted had to find a way to block the passed "a" pawn but 40...Ra8 doesn't work :-)

9) Jason McEwen vs. J.C. MacNeil Round 4. In this position, I fail to heed the sound advise of always look for checks and played 6...d6. How does Mr. McEwen win a piece?

10) Ben Gurka vs. J.C. MacNeil Round 3. As usual, Mr. Gurka had completely out played me in the opening, but the old adage "it ain't over till it's over" holds true. How does Black continue in this position?

11) Phil Brown vs. Brian Ledsworth Round 3. Final position. Black has no defense against so many extra pawns. The pawns do matter, and really really matter in the endgame. Ask Brian Wall, aka Pawn Wave Guy.

12) Andrew Eskenazi vs. Steven Bu Round 3. How does White win material in this position?

Brian Wall's answer to diagram 4a:

Thanks again to all - J.C. MacNeil