Corona Virus Announcement
As concerns grow about the potential impacts of COVID-19/coronavirus, we want to ensure the DCC patrons and Colorado chess community that we have been monitoring the norms and practices set forth by other chess clubs across the country as well as local business, governments, and schools. With that being the case, we have made the decision to temporarily close the club. We will resume activity on Tuesday, May 12th, unless otherwise advised. 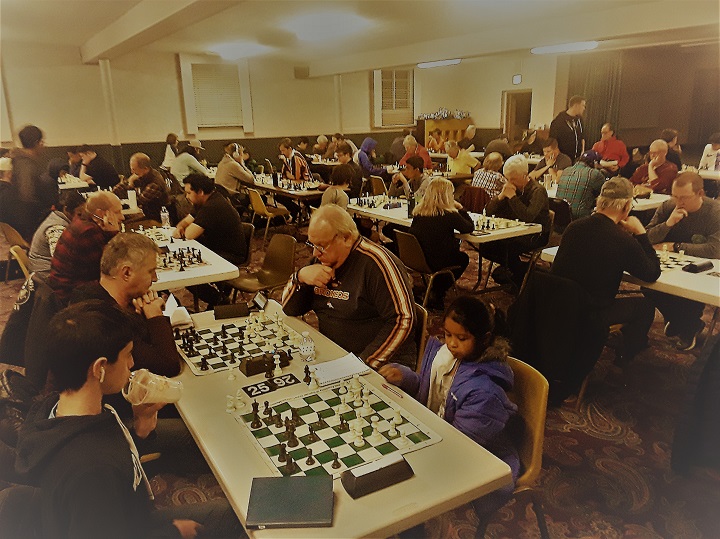 For me winning a chess tournament prize check is like money falling from the sky.

Both attendance and prize money payout increased by around 17% during 2019 at the DCC, Are monthly average Tuesday night attendance was 84 players playing at least one game each month. We paired over 70 players twice in the month of April and our average weekly attendance over the course of the year was more than 60 players each week. We are also seeing an increase in casual players at the club. 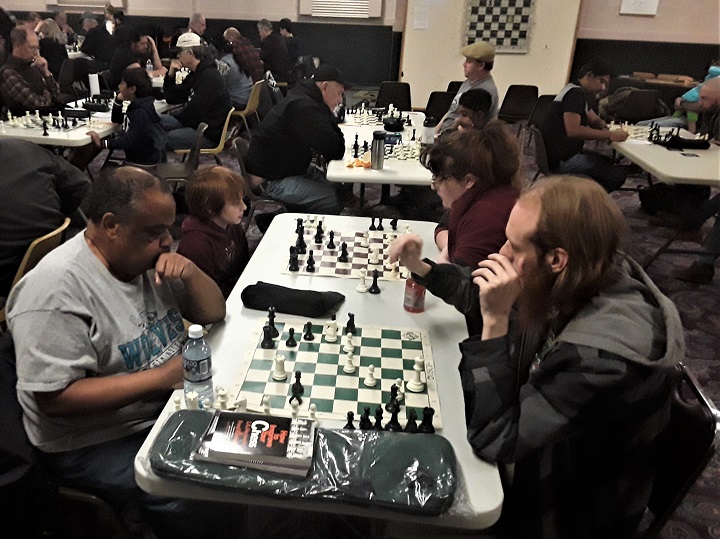 Before the round starts, the room is full and vibrant with both tournament and casual players, plus the chess kids' parents. All awaiting for the pairings to appear on our snazzy electronic screen. Let me just say this about the parents: They're great. They all are unfailingly polite and undemanding. They willingly spend their time and money to allow their children to play chess on Tuesday night and in DCC weekend tournaments. Recognizing that chess is good for developing young minds, and in many ways for teaching life lessons. 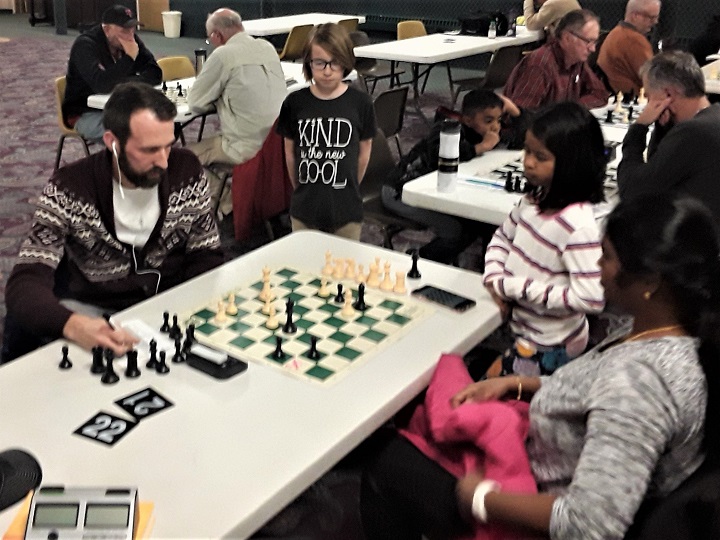 Jeff Manuel is playing Karthika Sakthisaravanan. They are being observed by Jeff's son, Grayson. and Karthika's daughter, Kaavya... 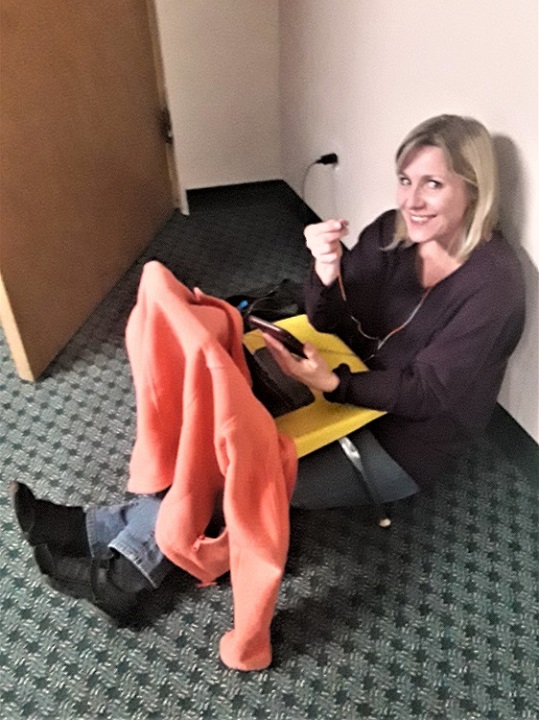 ... and chess parent, Kori McConnell, proud mom of Griffin and Sullivan, is in her makeshift DCC "office".

In 2019 we paid out 8844 dollars for the monthly Tuesday night tournaments. Our prize payout for the three major DCC weekend tournaments - the Tribute to Martin Luther King, the Denver Open, and the Fall Classic, plus a one-day Rapid tournament - totaled 8050 dollars.  The DCC major tournaments and Tuesday night are always 3 sections, so this prize money is going to many different players of all levels of ability. In addition, the 2019 DCC Tour paid out almost 1900 dollars. 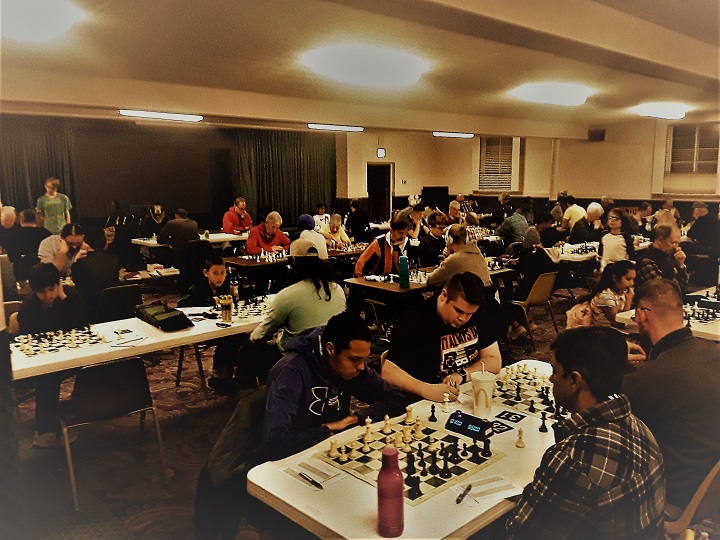 All levels of chess playing ability are at the DCC,

The DCC Tour could not be more fair. Each rating class receives an equal share of the year-end total for 1st, 2nd, and 3rd place. If a player plays often and plays well, that player will win a year-end bonus prize payback from the DCC. A wide range of players are going to play tournament chess regardless of their chances of winning prize money. For me, winning a chess tournament prize check is like money falling from the sky :-) 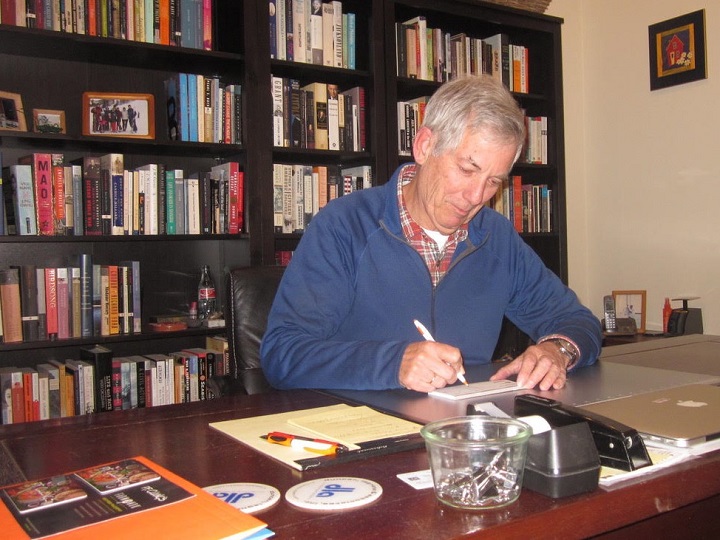 ... and here is the awesome championship trophy that will be awarded to each section winner.

OK, that is enough boasting about the growth and popularity of the DCC. On with who won the DCC championship trophies. Yes, not only prize money and bragging rights, but also an awesome trophy for the winners' trophy case. I am sure Brian Wall expected to be the 2020 DCC Tuesday night champion, but it was not to be. Jesse Hester won against the DCC President in round 3 and went on to finish with 4.5 points. (see diagram #1and #2 below) Losing only to Chris Peterson in round 5 and giving up a draw to Kevin Seidler in the last round. Mr. Hester wins the Premier section trophy and 144 dollars for his fine play. 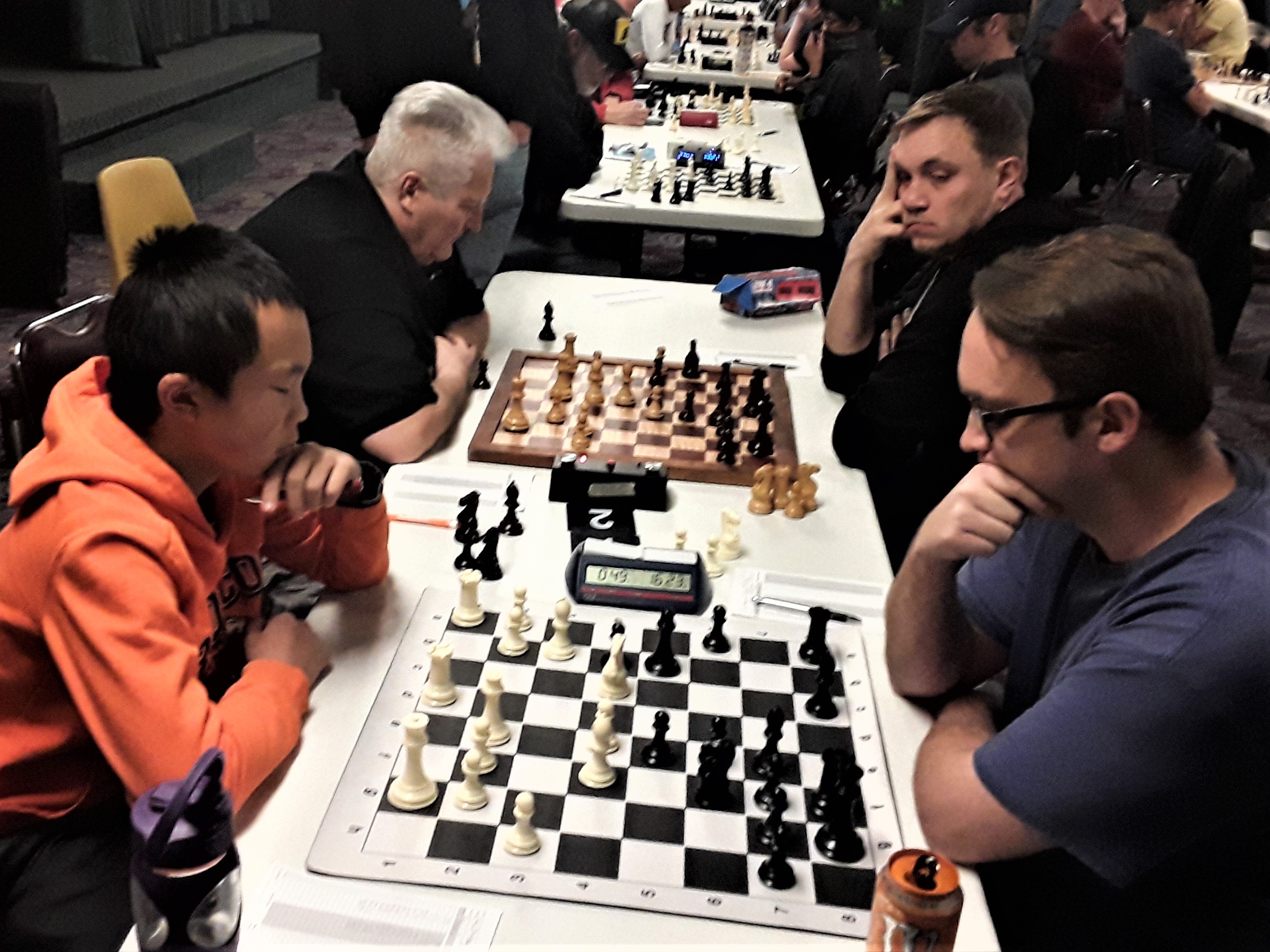 Chris had a holiday break from school and was finally able to get in some games at the DCC. (diagram #5. #6, and #7) He had a 1st round bye, did not play in rounds 2 or 6, but won the 3 games he was able to play, to take clear 2nd place and win 94 dollars.  Which he promptly donated to the upcoming 2020 Denver Open. Thank you very much, Mr. Peterson. Mr. Wall ended up tied for 3rd place with Mr. Seidler and Mark Krowczyk. (diagram #3 and #4) They each won 18 dollars and 67 cents. Vedanth Sampath - running with the big dogs - won the 20 dollar Premier Upset prize for his win against Mr. Krowczyk in round 4. 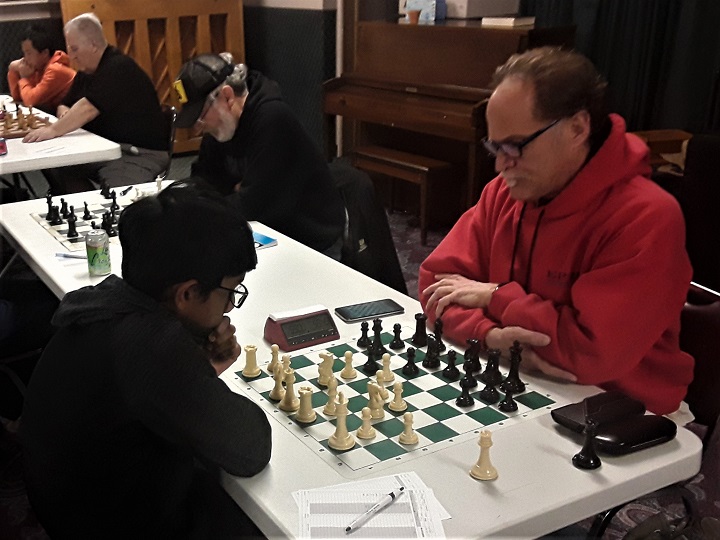 As was expected,the Tuesday night DCC Tournament Director, Ben Gurka, won the U1900 trophy and 131 dollars with 5.5 points. Only allowing a draw to Ken Doykos in round 4. Mr. Doyko's son, Ted, took clear 2nd place and won 79 dollars with 5 points. Only losing to Walter Lowe in round 2. (diagram #8)  Phil Brown, whose play is improving by the game, took the 3rd place prize of 54 dollars with 4.5 points. (diagram #9 and #10) 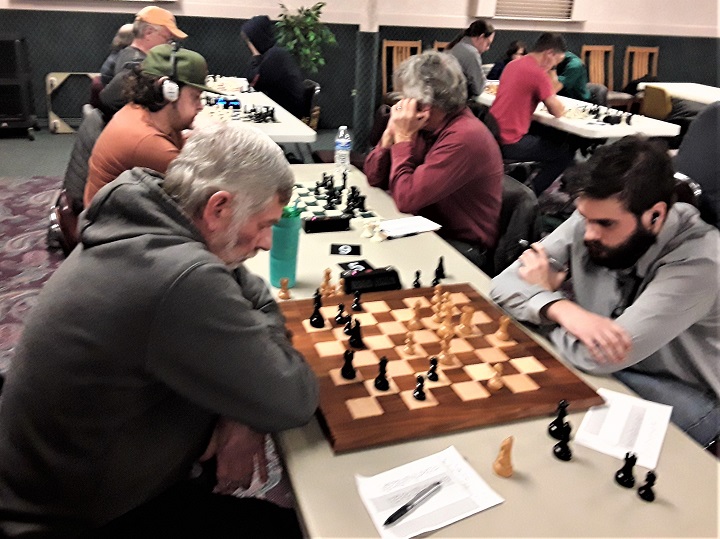 Ben Gurka playing White against John Krue. Ted Doykos in the green hat is playing his dad, Ken Doykos. An unavoidable next to the last round pairing.

I should mention Mr. Lowe's 4 point final score, in addition to his upset win against Ted, also includes big upsets against Jason McEwen (diagram #11 and #12) and Andrew Starr, who are both strong players. The actual U1900 Upset prize was won by Kumaran Lenin who - playing up a section - put a 371 rating point difference win on Meint Olthof in round 1. Meint said he was just going to forget to write Kumaran's 20 dollar check :-) Just joking. All of us know Mr. Olthof is an honorable upstanding man, that we are glad to have as the DCC Treasurer. 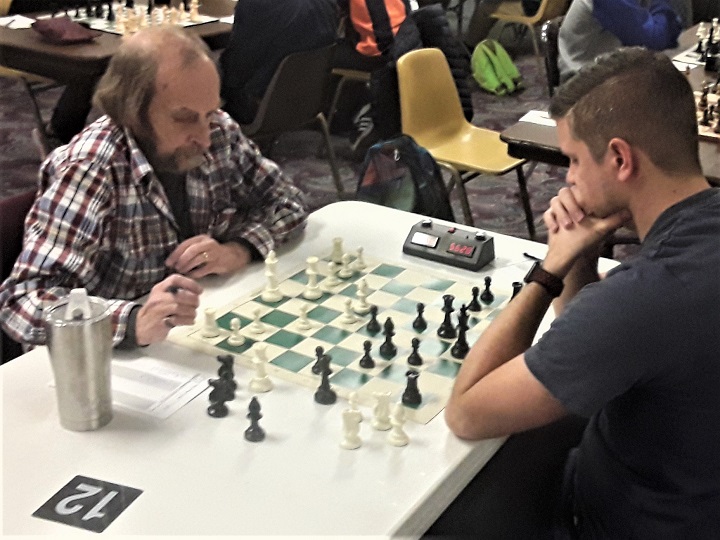 Walter Lowe has the White pieces against Jason McEwen. 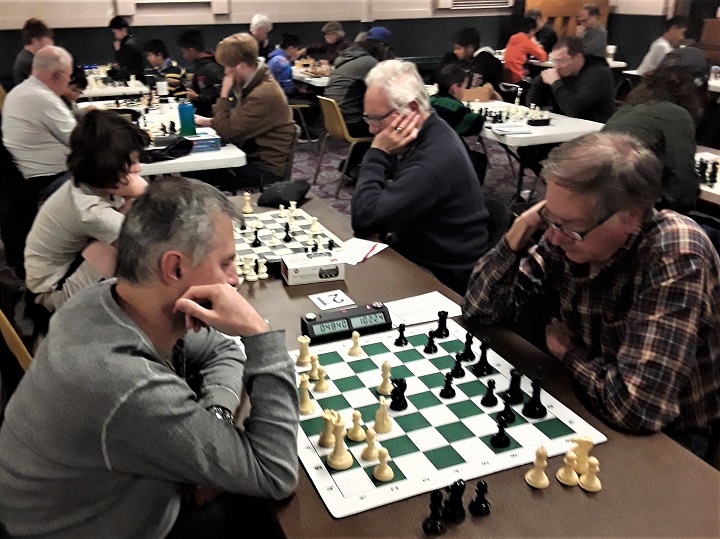 Mark Zeringue, in the plaid shirt, could not get passed Vyacheslav Pupko in the last round and had to settle for 2nd place.

There was also a really close race for the trophy in the U1500 section. Going into the last round Mark Zeringue had 4.5 points with 4 straight wins after a 1st round draw. Jeff Manuel was a mere half-point back after losing to Mr. Zeringue in round 4. Mr. Manuel took the trophy and won 131 dollars after winning his round 6 game against Michael McNamara when Mr. Zeringue was upset by Vyacheslav Pupko in their last round game. Mr. Pupko ended in clear 3rd place with 4 points and won 54 dollars. Ezra Christ won the 20 dollar U1500 Upset prize for his big 1st round draw against Mr. McNamara. 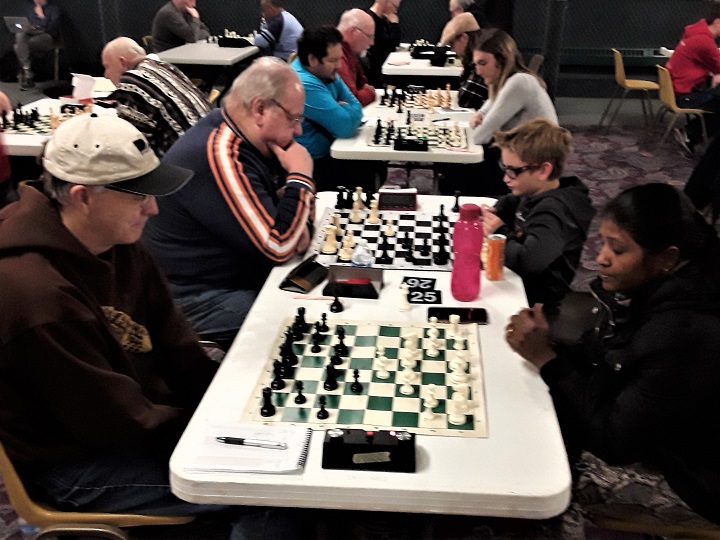 Congratulations to all the prize winners and thanks to all the players who are making the Tuesday night DCC tournaments exciting and competitive. 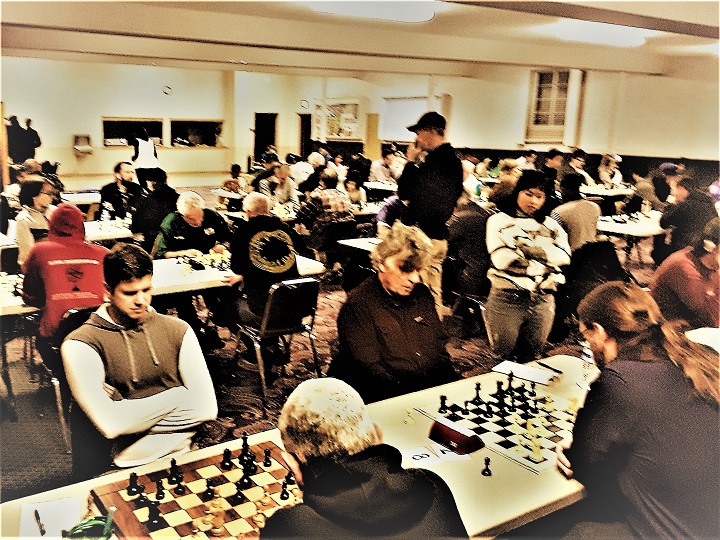 All the room shots in this report were enhanced with a "Zeke" filter.

Seems appropriate to start with games from the Premier section winner.

1) Jesse Hester vs. Mark krowczyk Round 2. @ 12...Ke8. White has to recapture the Black Queen here. Right? This is a great game by Mr. Hester. Let's just say he plays fearlessly. Mr. Knowczyk credits his opponent in his excellent game notes.

3) Davin Yin vs. Brian Wall Round 1. Black to move. By age, 53 years separates these two players, yet here they are playing the same game. Find the sweet move the old guy plays in this position to win against the youngster.

4) Brian Wall vs. Kevin Seidler Round 2. Final position. Black resigns. It's Brian Wall with the White pieces and does it surprise anyone that Pawn Wave Guy has a pawn wave rolling down the board :-)

5) Chris Peterson vs. Brian Hughes Round 3. After 16,,, h6, does Mr. Peterson move the attacked Knight? If not what does he play? Chris is very instructional in his Master level positional thinking. Reading his notes is a how to play chess lesson.

6) Brian Wall vs. Chris Peterson Round 4. Mr. Peterson's comment here is: "Brian finally gave up" and again Master level notes and analysis are provided for us class players. Or as Mr. Wall would say; for the "weak sauce".

7) Chris Petersen vs, Jesse Hester. Round 5. After 20... Nc6-d4 Chris comments. that "Jesse has managed to get a crushing position..." Again Mr. Petersen's comments and analysis are well worth your time to peruse. In particular in this game his thoughts on time management.

8) Walter Lowe vs. Ted Doykos Round 2. Find the beautiful winning move that Mr. Lowe played in this position. Want to talk about a tactical shot, well Mr. Lowe's move is a tactical shot :-)

9) Phil Brown vs, Randolph Schine Round 5. In this position wanting to release the Bishop from protecting the b pawn, Mr. Schine played 17...b6. What did he overlook?

10) Phil Brown vs, Ken Doykos Round 6. Phil says he was focused on trying to make Ne7+ work so in this position he played 17. Qg5. What would have been a better move?

11) John Krue vs. Jason McEwen Round 6. Maybe Mr. Krue thought his King was safe because h2 is protected, so he played 26. Nxc7. First, what is the only move in this position? Second, after ...Nc7 how does Mr. McEwen continue?

12) Jason McEwen vs, Owen Vonne Round 3. Black has just played 18... Nc6-e7, attacking the Rook. What did Owen overlook? As always, Mr. McEwen's notes are excellent and informative in his description of his thought process during the games he plays.

13) Karthika Sakthisaravanan vs. Robert Teitelbaum Round 2. Black has just played 51...Qc7-f7, looking to trade Queens. What move did Mr. Teitelbaum fail to notice, that now wins for White?

14) Jay Stevenson vs, Felipe Martinez Round 5. To escape the check White played 47. fxg4. What did Mr. Stevenson overlook?

15) Roger Redmond vs. J.C. MacNeil Round 5. I thought 27...Rf8-f3 was just going to win immediately. Find the excellent defensive move Mr. Redmond plays in this position.