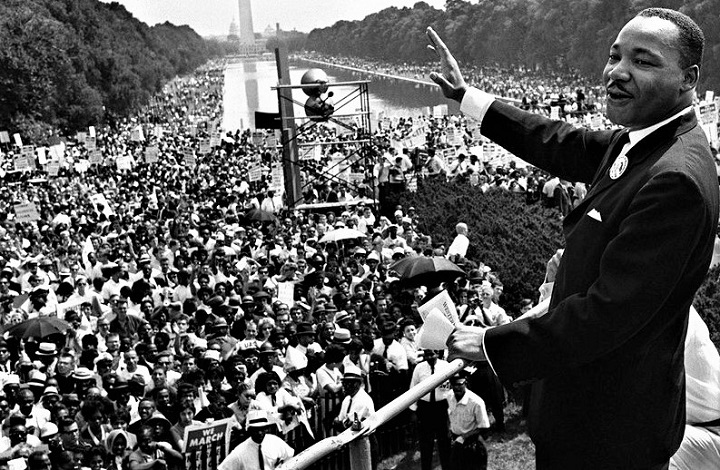 ... then you know that refusal took an enormous amount of courage.

Martin Luther King Jr. was a man who stood up against injustice. The  "content of his character", and "not the color of his skin", enabled Reverend King to better the lives of millions of people. A national holiday is named in his honor and a granite statue stands in Washington D.C. The Denver Chess Club does the small thing of having an annual tribute tournament in his name as a sign of respect. The heading photo is from the legendary "I have a dream" speech, delivered in 1963 from the steps of the Lincoln Memorial. 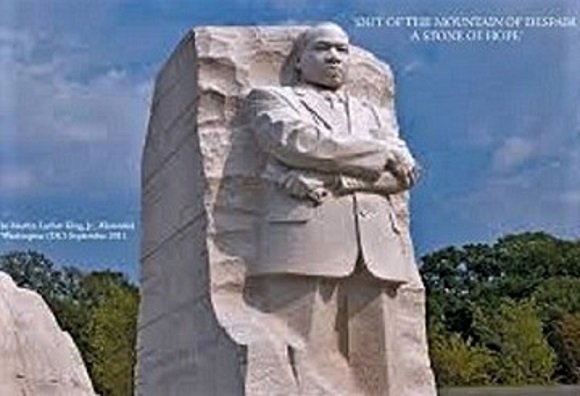 Artist Lei Yixin used a quote from the I have a dream speech - "Out of a mountain of despair, a stone of hope" - as inspiration for his sculpture of MLK.

It might be said that the civil rights movement in the United States began in 1955 when Rosa Parks, a black woman, refused to give up her seat on a Montgomery, Alabama bus to a white man. If you know anything about the racial attitude of the southern states at that time, then you know that refusal took an enormous amount of courage.  At the time Martin Luther King Jr. was a nationally unknown Baptist minister. He, along with his friend and colleague Ralph Abernathy, organized a boycott of Montgomery buses, and the long battle for desegregation and equal rights for all citizens began in earnest. It is sad to say that 65 years later racism in America still exists. Maybe not as openly now as it was then, but still under the surface, absolutely. 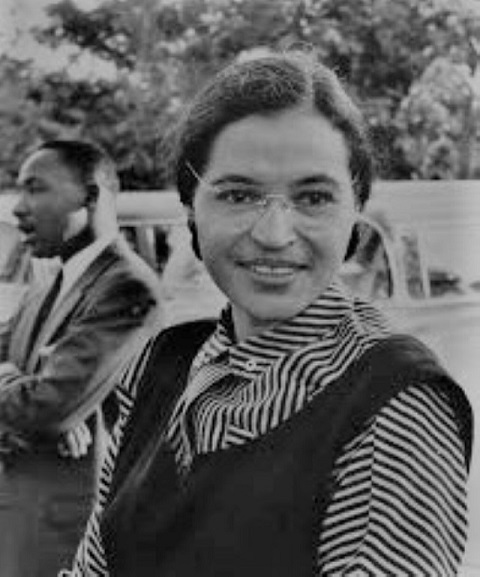 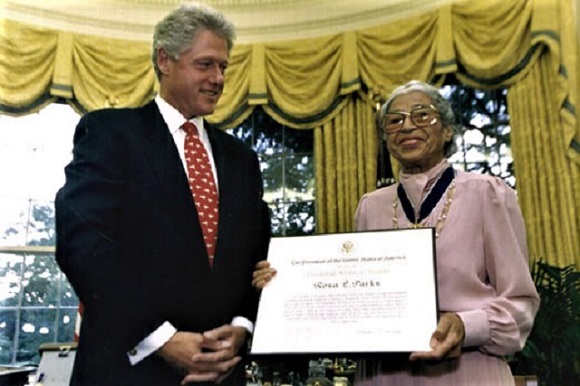 ...and here being awarded the Presidential Medal of Freedom by Bill Clinton in 1996.

Before getting to who won what at this year's DCC Tribute to Martin Luther King tournament, here are a few of the many quotes that show the conscience of the man. The words that he spoke have been carved into stone, and reprinted many other ways, and are truly inspirational for us all. 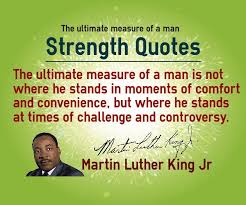 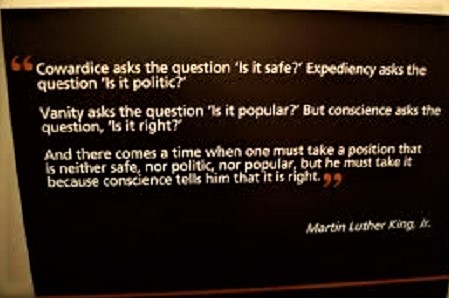 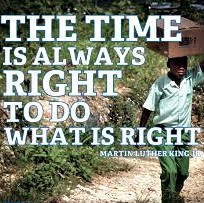 The 2020 Tribute to Martin Luther King tournament was fairly well attended. with 65 registrations, which increased the prize fund payout to 1550 dollars. Up from the advertised based on entries prize fund of 1400 dollars. Unfortunately, we did not have 65 players playing each round. A couple of players were no shows or dropped out after the 1st round. Then, as usual, many players did not play the 3rd round. 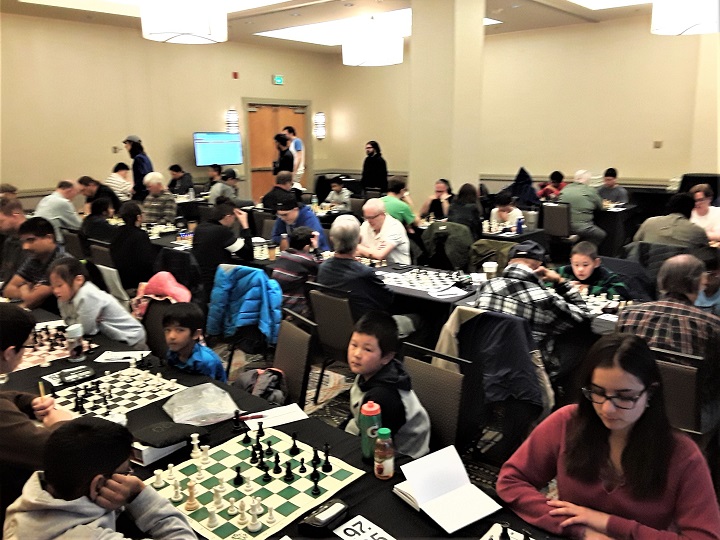 The 2020 Tribute to Martin Luther King tournament in progress.

Three rounds in one day is just exhausting and totally unnecessary.  The argument for having 5 rounds, is that it will be more likely to have a clear 1st place winner in each section. That is just bogus. After 4 rounds there was a clear 1st in both the Open and U1800 sections. There was a tie for 1st in the U1400 section, but with only 8 players how could there not be? Anyway, if there is a tie for 1st place; So what? Not to mention with 4 rounds the same time control could be used throughout. Instead of the shorter time control necessary to cram 3 rounds into one day. OK, sorry, that's enough grumbling about the format. On with who won what...

There was no question that with the presence of Josh Bloomer and Gunnar Andersen, along with Brian Wall and Sullivan McConnell, plus no less than seven Experts, the competition in the Open section was going to be intense. Mr. Bloomer started off by beating the Tournament Director, Ben Gurka, and went on to a perfect 5-0 score. With wins against Griffin McConnell, Gunnar, Brian, and in the last round, against his student, Daniel Herman. (see diagram #1 below) This fine clear 1st place performance earned 280 dollars. 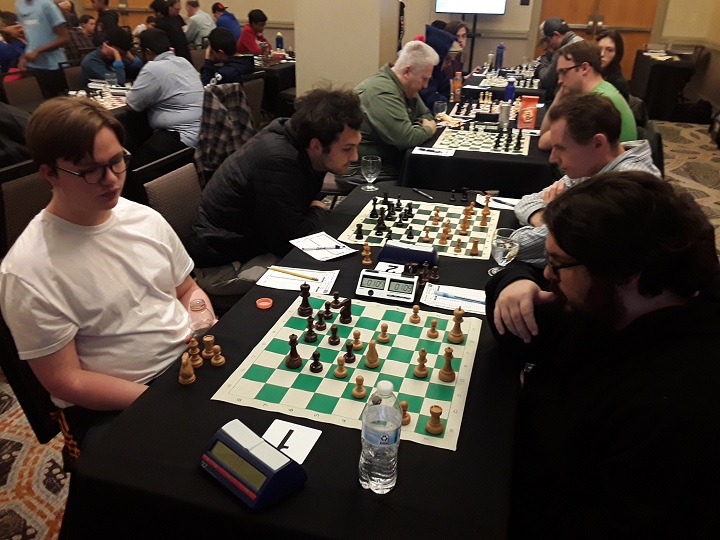 Already in Round 2 we find three Masters versus three Experts on the top boards. Board 1, Griffin McConnell vs. Josh Bloomer. Board 2. Gunnar Andersen vs. Eric Billaux. Board 3. Brian Wall vs. Jesse Hester... 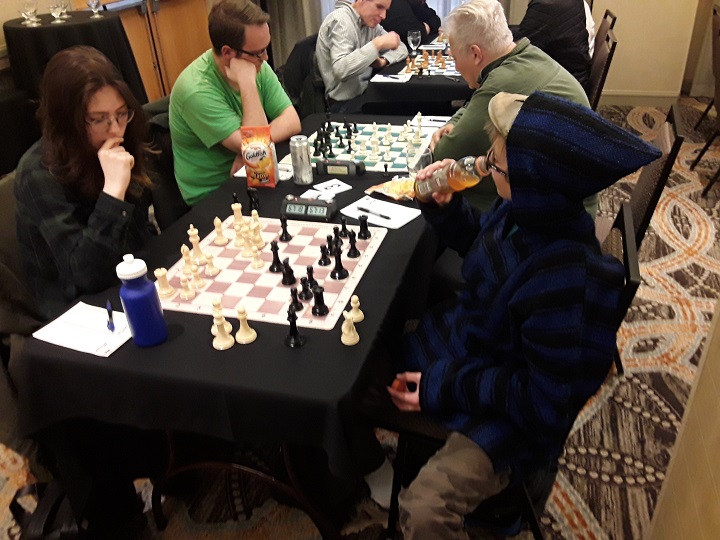 ... and on Board 4, Sara Herman is playing Sullivan McConnell.

The surprise of the Open section was Expert Jesse Hester (diagram #4) taking clear 2nd place ahead of three Masters. Only losing to Brian Wall in round 2, he upset two higher rated players in rounds 4 and 5 to end up with 4 points and win 215 dollars.  Gunnar Andersen, Brian Wall, (diagram #2 and #3) Sullivan McConnell, and Rhett Langseth, all finished with 3.5 points and share the 3rd place prize of 125 dollars. Sullivan - Colorado's newest Master level player - held both Mr. Andersen and Mr. Wall to a draw. Gunnar and Brian both only lost to the 1st place winner. Rhett took a 1st round bye and was no doubt shocked to lose to Navneet Ramkuar, a player rated over 600 points lower, in round 2. Rhett recovered from the shock and finished with 3 wins. I think Navneet ended up paired against Rhett because he had an upset draw against near Expert, Mark Krowczyk in round 1. 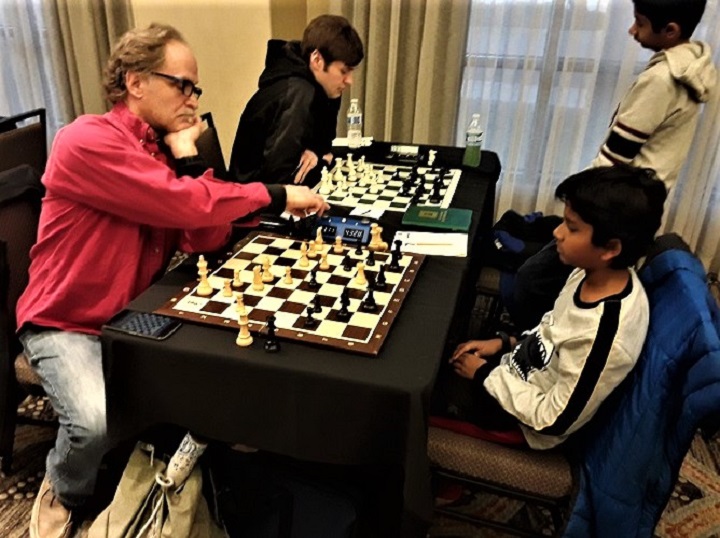 In the foreground: Mark Krowczyk against Vedant Margale and  Rhett Langseth is playing Navneet Ramkumar.

The U1800 section mirrored the Open section with clear 1st and 2nd place winners and then 4 players tying for 3rd place. Srikar Appana (diagram #5) emulated Josh Bloomer and won all his games, including an upset win against Steve Kovach, who everyone knows is a strong player. With this fine score, Mr. Appana won 280 dollars. 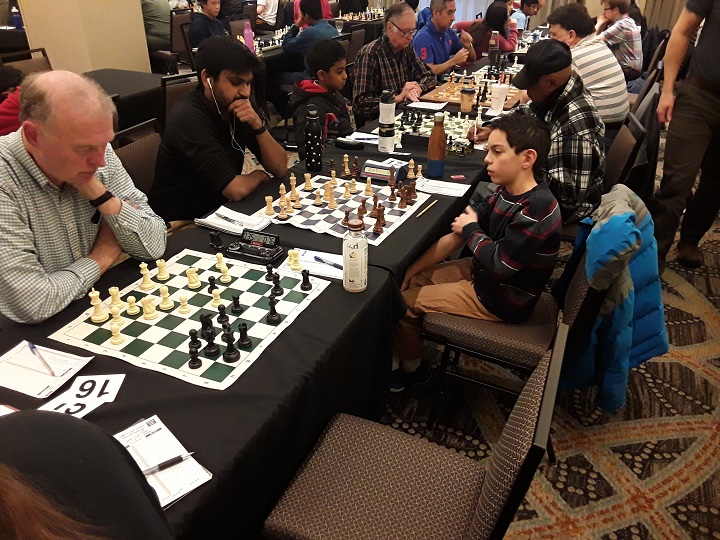 Steve Kovach thinking about his move. Srikar Appana has the White pieces against Amitia Seebba.

I, in turn, emulated Jesse Hester and finished with 4 points and won 215 dollars. The difference here is Mr. Hester no doubt played good moves to win his games. Whereas in my case, I was just lucky. In round 1, I'm paired against the much lower-rated Sra Lankipalle. A young girl - probably like 12 years old - and she completely outplays me. Then in a winning position (she has two pieces for a Rook, and a couple of extra pawns) she offers me a draw. I guess she didn't want to see a grown man cry :-) Then in round 4, after a vicious attack on my Queenside castled position, Dean Brown is up more pawns than I could count. But he overlooks a pin on his Queen and has to resign. (diagram #9) 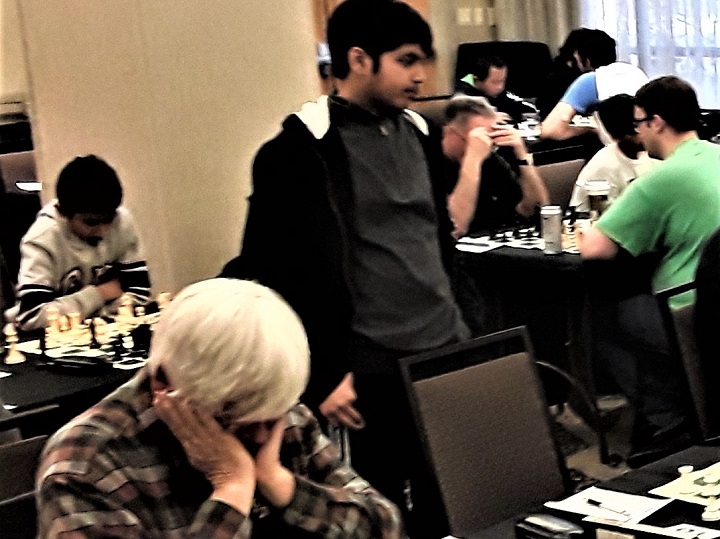 This is a fine photo of Dean Brown's hair. I take only the best pictures :-) Standing is Shiven Saxena who scored some big upset points in the Qpen section..

I only won my round 2 game after plenty of help from my opponent. So with a 3rd round bye, I have 3 points going into the last round. I managed to play a pretty good game against Jeff Baffo (diagram #10) and score the full point. Which gave me clear 2nd place and put 215 dollars in my pocket. 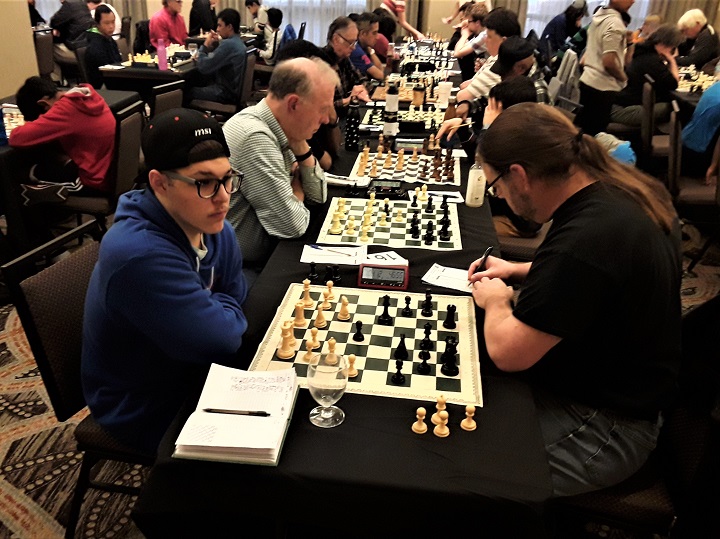 As mentioned, just like in the Open section, 4 players ended up tied for the 3rd place prize with 3.5 points. Steve Kovach, Joe Bean, Christopher Merrill, and Daniel Smith all share the 125 dollar prize. Mr. Smith only lost to the section winner and his score is all upset points. The rating point difference between Mr. Smith and his opponents totaled well over a thousand points. Mr. Bean also had an upset win and draw in his 3.5 point final score. 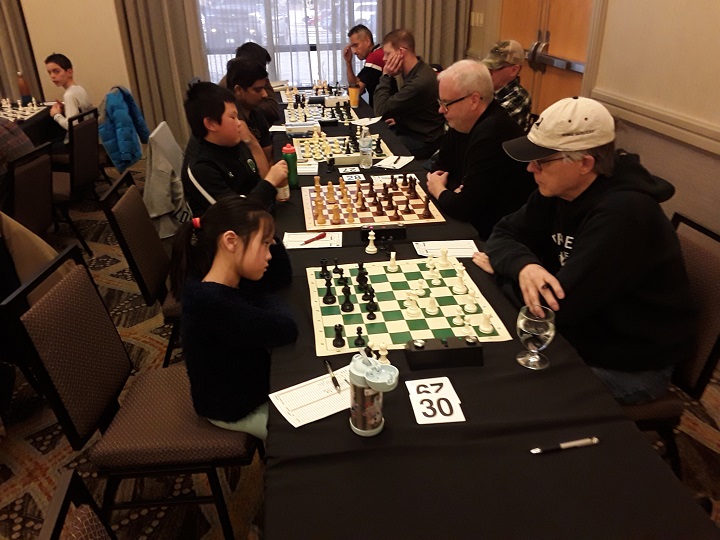 In the foreground Iris Li is playing Robert McNamara. Next is Jonas Zeutzius playing white against Jay Stevenson. Then I think the next board is Ram Nistala vs. Scott Williams

In the U1400 section, Jonas Zeutzius and Ram Nistala share the combined 1st and 2nd place prize of 245 dollars, with 4 point scores. Jonas only lost to Ram in round 2, Iris Li took a point from Ram in round 3. Scott Williams won the 3rd place of 65 dollars with a 3.5 point score. I'm sorry to say that I don't know any of these prize winners, but I am glad they were part of this tournament. Iris and Mr. McNamara play on Tuesday nights at the DCC. With only 9 players in the U1500 section, the prize money was understandably not equal to the prizes in the other sections. 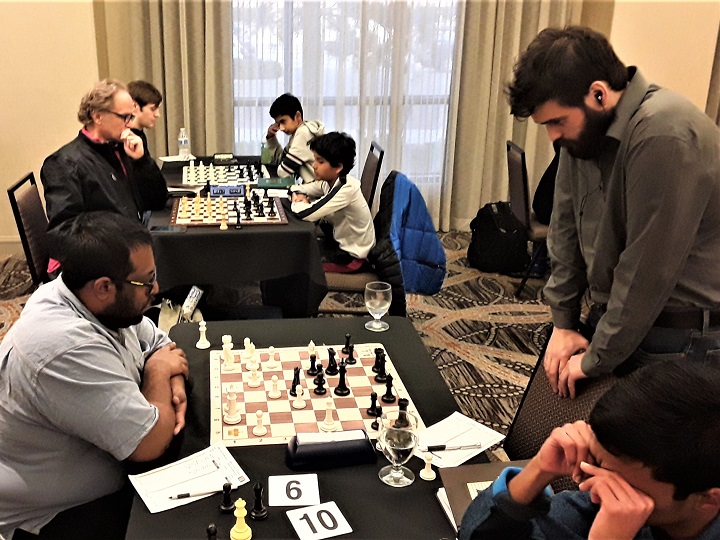 Ben Gurka (standing) did a fine job directing this tournament as he also does for the DCC Tuesday night tournaments.

Congratulations to all the prize winners and thanks to all the players who participated in this annual Tribute to Martin Luther King tournament.

Lets start of this section with a great game between a student and his coach from the last round in the Open section.

1) Daniel Herman vs. Josh Bloomer. Round 5. After 12... e5 the Knight is attacked. Where do you suppose Daniel moves the attacked piece? Assume he does not play passively. This is a great game to play over. Fireworks abound throughout.

2) Wesley Woo vs. Brian Wall. Round 1. Final position. White to move and mate cannot be avoided. It might be said that this is also a game between a coach and student. In a sense, all chess players in Colorado are students of Brian Wall.

3) Josh Bloomer vs. Brian Wall. Round 4. A French defense has gone off the rails. Black resigns. Would Josh Bloomer be as good as he is without the years he has studied with and played against Life Master Brian Wall.

4) Eric Billaux vs. Jesse Hester. Round 3. Black to move. Mr. Hester provides superb annotations for this game and demonstrates excellent technique to increase his advantage from this position.

5) Srikar Appana vs. Christopher Merrill. Round 5. Final position. Black resigns. You can see the White King went on a journey. Mr. Merrill sacrificed many pieces in the hunt for the White King. Only to have the fox escape the hounds. With this win, Mr. Appana took 1st place in the U1800 section with a perfect score.

6) Phil Brown vs. Joe Aragon. Round 1. Can you find the move Mr. Brown played in the position to force checkmate quickly?

8) The same game. Black to move. Diagram #7 arose from this position of neglected development. The White King can't be described as anything other than a sitting duck. A harsh assessment, but tell it's not true.

10) Jeff Baffo vs. J.C. MacNeil. Round 5. Yes, Mr. Baffo is intentionally playing 4. Nxe5 and an interesting game arises from this whole piece sacrifice early in the opening.