Corona Virus Announcement
As concerns grow about the potential impacts of COVID-19/coronavirus, we want to ensure the DCC patrons and Colorado chess community that we have been monitoring the norms and practices set forth by other chess clubs across the country as well as local business, governments, and schools. With that being the case, we have made the decision to temporarily close the club. We will resume activity on Tuesday, June 9th, unless otherwise advised. 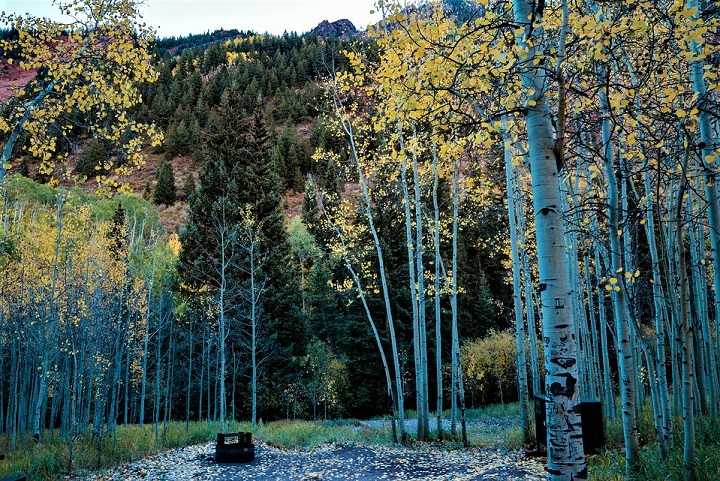 Kudos to Mr. McConnell and the CSCA for starting up both programs. Nothing but good can come from these CSCA endeavors.

Before getting to the Fall Classic report I'd like to start off by talking about women in chess. I got to thinking about this after reading an article by Leon Watson in The Telegraph (a United Kingdom newspaper). Mr. Watson reports on comments made by the "Queen of Chess", GM Hou Yifan, a former Women's World Champion. 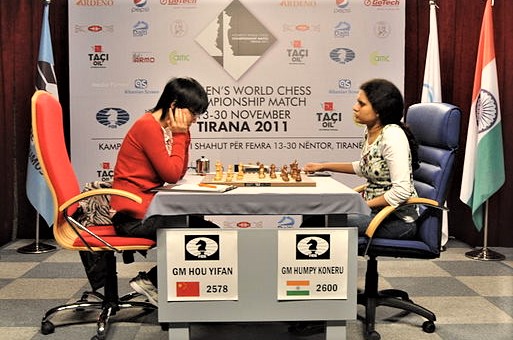 Stunning to me was to read GM Yifan saying, "it's hard to imagine women competing at the same level as men" because "women are less focused than men, don't train as hard and are at a physical disadvantage" GM Nigel Short, who is known to be outspoken, was widely criticized for claiming men and women are "hard-wired very differently" but here says, he "would have been ripped to shreds as a misogynist dinosaur" if he had said what Ms. Yifan said. True that :-) 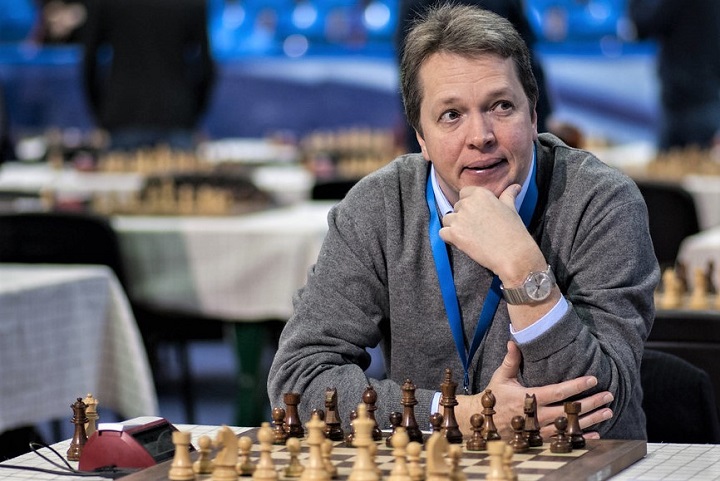 Chess does not require physical strength but a player does need to have stamina and endurance. GM Yifan says "I think there is a physical aspect because chess exhausts a lot of energy, especially when games last 6-7 hours, and here women could be more disadvantaged." Women; is that true? 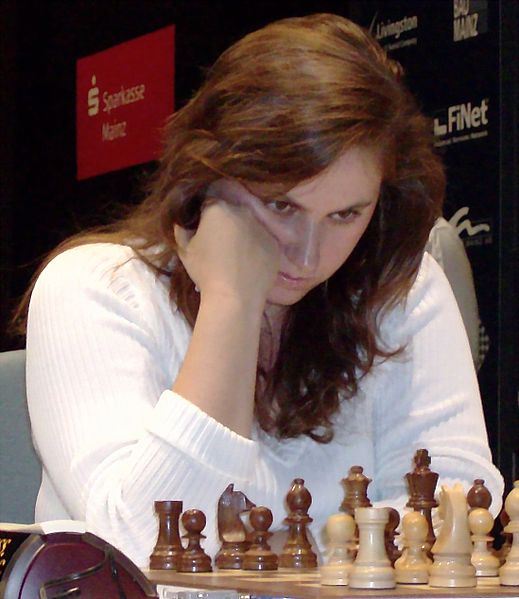 In her prime, and likely still, GM Judit Polgar could hold her own against any male player.

Ms. Yifan comments on how girls are raised with, "Girls are told at an early age that there’s a kind of gender distinction, and they should just try their best in the girls' section and be happy with that. So without the motivation to chase higher goals, it’s harder for girls to improve as fast as boys as they grow up." Also saying,"To me, in all aspects of life, sometimes women and men tend to see the same thing from completely different perspectives, and that also comes into chess." and "I suspect that the male perspective on chess favors men, perhaps when it comes to the emotional aspect of the game and making practical and objective decisions." Seems to me she is saying men and women are "hard-wired very differently" :-) 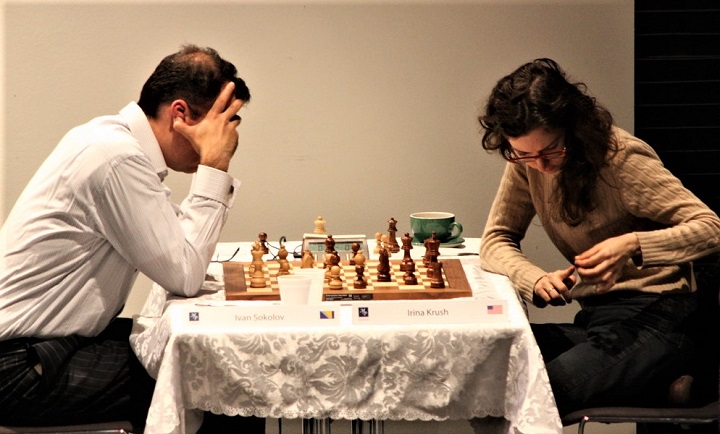 GM Irina Krush is apparently not too concerned with this guy ;-)

Both Ann Davies and Alayne Wilinsky took exception to GM Yifan's comments. Alayne says, "I don't agree with it at all on the majority of it." Ann saying, "I disagree with just about everything Yifan says" Please take the time to read Ms. Davies entire comment here and Ms. Wilinsky's here.   Let me just say I completely disagree that women cannot compete with men on an equal basis over the chessboard. Maybe not yet at the World Championship level, but certainly right up to that level. They just have to put their minds to it :-) And here in Colorado, they will have the opportunity to do just that. Starting by participating in the Colorado Women's Chess and Wine Club. This great idea from Kevin McConnell and the CSCA is to encourage women to get into playing tournament chess. 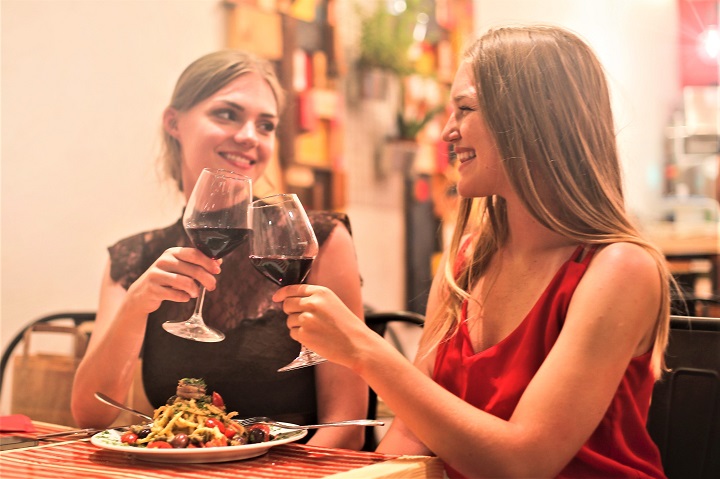 Women learning to play chess in a relaxed atmosphere is the plan.

Quoting Mr. McConnell: "This Friday (10/18) kicks off the first CWCWC or Colorado Women's Chess and Wine club at the Regal Chess Café and Bakery. They will all get 6 free chess instruction classes and free 3 month diamond memberships to Chess.com.The CSCA will also be looking to start another CWCWC in January in a different location while the other CWCWC keeps rolling along at the Regal." coloradochess  and scroll down.

"We have also started two new after school all-girls chess clubs free to all-girl participants at two Title 1 schools (a Title 1 school is a school in which the majority of the students are on the free or reduced lunch program). There are 29 girls in the two clubs and any of these girls that choose to compete in the Colorado State Scholastic Chess Championship or the All Girl's State Scholastic Chess Championship will be able to do so free!" Kudos to Mr. McConnell and the CSCA  for starting up both programs. Nothing but good can come from these CSCA endeavors. 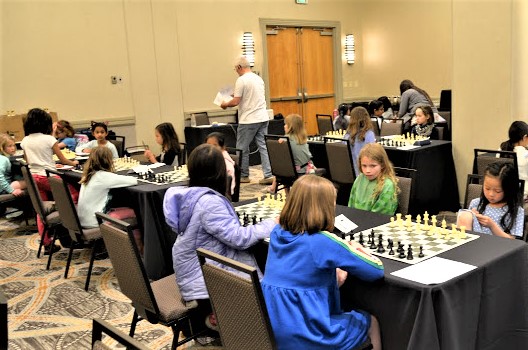 The CSCA intends to inspire young girls to take up chess. 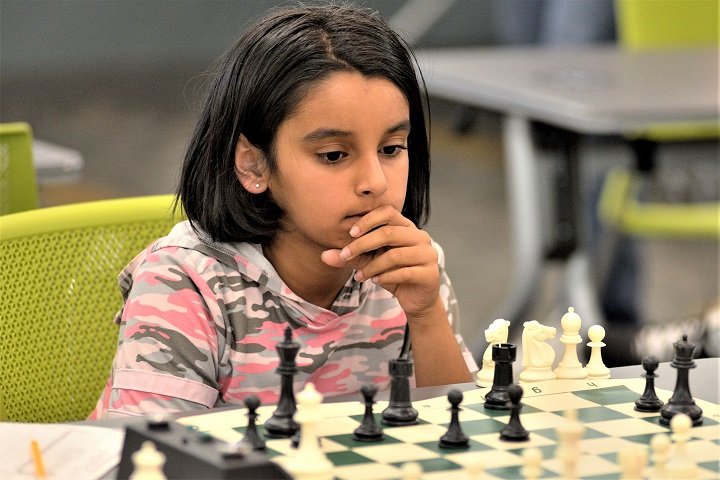 This young lady at this year's DCC Fall Classic could well be a future World Champion.

On with a summary of this year's DCC Fall Classic. Attendance was down slightly, but a 53 player turnout was certainly not bad. To the credit of Meint Olthof, the DCC Treasurer, he chose to pay out the entire as advertised based on 60 players prize fund of 1400 dollars. In addition, the prize money was divided equally between the 3 sections, which is something I have always advocated. Weighing the prize money slightly to the Open section is fine, but not by more than a few percentage points. An equal share for each section is even better in my opinion. 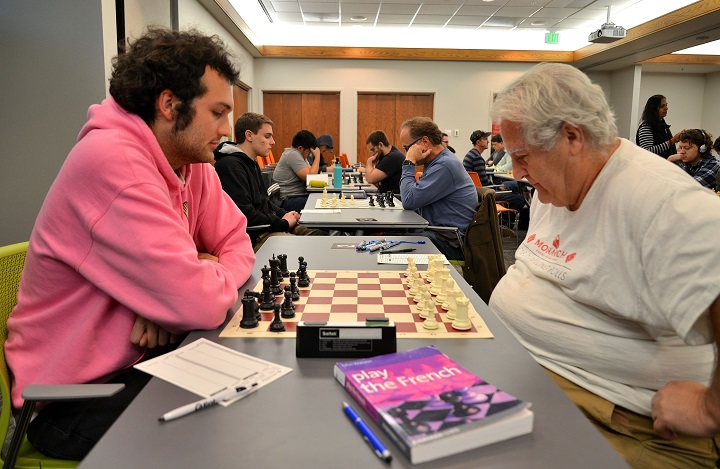 As might be expected in the Open section, Gunnar Andersen was at the top of the standings after round 5 with 4 points. He was joined there by Sullivan McConnell. Everybody knows Sullivan is going have a permanent over 2200 rating before long. Mr. Andersen was upset by Jesse Hester in round 2, and Jesse ended up on board 1 against Sullivan for the last round. A win would have meant clear 1st place for Mr. Hester, but alas it was not to be. At one point Ben Gurka and I both thought he had good chances; down the exchange but with a strong passed pawn. The youngest McConnell brother prevailed and he and Gunnar won 186 dollars each. Mr. Hester ended up sharing the 3rd place prize of 94 dollars with Brian Wall, both finishing with 3.5 points. 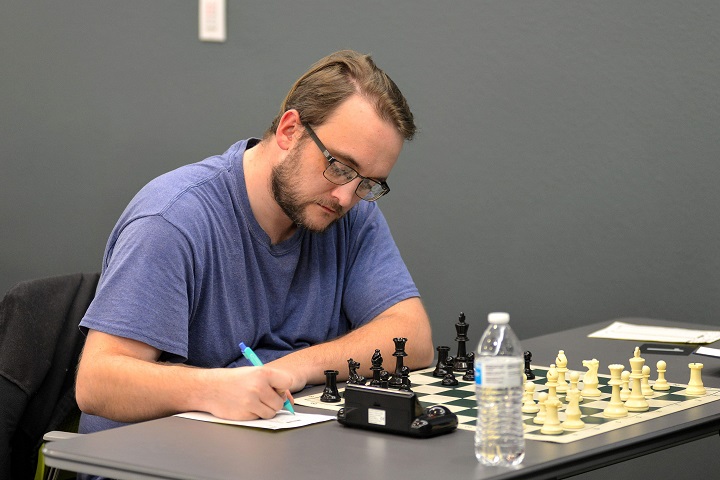 Ted Doykos was the highest-rated player in the U1800 section and he appropriately finished with 4 points, but only after being upset by Meint Olthof in the 1st round. Also ending up with 4 points was Michael Igoe and Phil Brown. Like Ted, Mr. Igoe started out with a loss then won four straight. Ending with a nice last round upset win over Steve Kovach, a real strong player... when he doesn't leave a Rook hanging :-) Mr. Brown was just the opposite; winning four straight to start - which included a sweet round 2 upset win over Roberto Popa - only to lose his last round game against Mr. Doykos. Thus they all share the combined 1st, 2nd, and 3rd place prizes, with each winning 156 dollars. 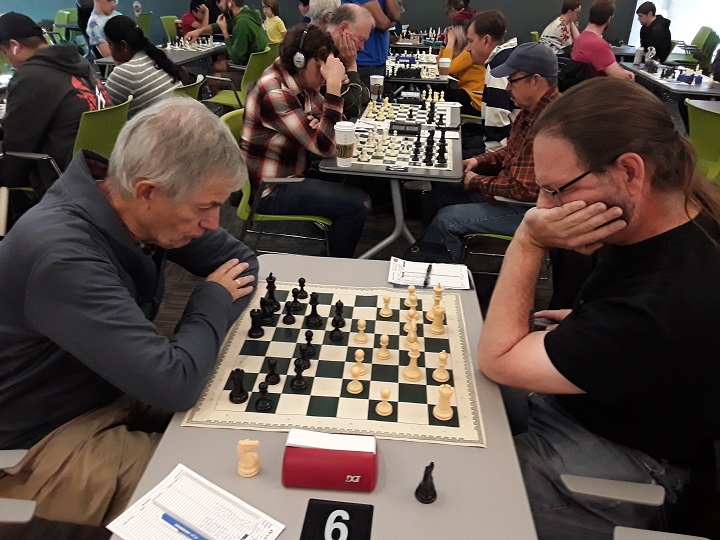 Meint Olthof with the Black pieces against Phil Brown. 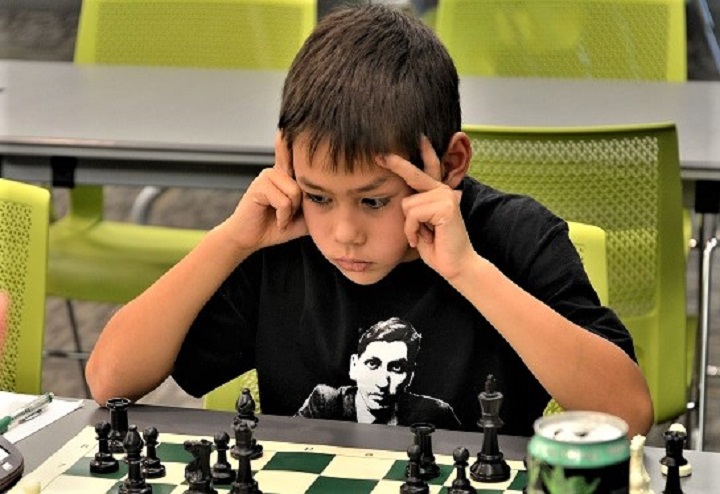 Owen Vonne in full focus mode. Maybe channeling the player on his shirt :-)

The youngster, Owen Vonne - who is like 8 years old - just keeps winning money. He tied for 1st place in the U1400 section with Daniel Smith,  Again the top prize winners only lost one game to end up with a final score of 4 points and win 186 dollars each. Owen's only loss was to Mr. Smith and he in turn only lost to the 3rd place winner, Jeff Manuel. Mr. Manuel won 94 dollars for his well earned 3.5 points. 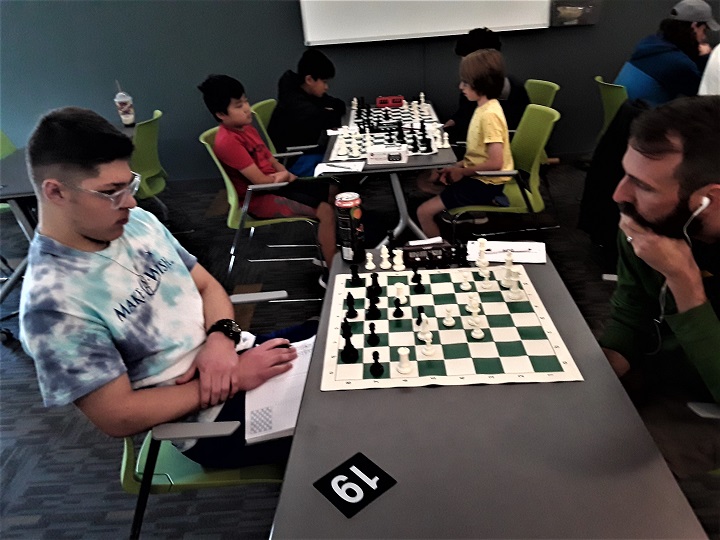 It's good for me to see that pretty near all the prize winners in this tournament are regular DCC Tuesday night players. DCC tournament prize money may not make a house payment, but any 1st or 2nd place prize will generally cover USCF and CSCA memberships, the entry fee, and leave plenty of money for lunch. Of course, the next time you win a prize, after the entry fee, it's all lunch money :-)

Many thanks to John Brezina for providing pictures from round 3 . Other photos from my phone and free to use Google images. See the complete DCC Fall Classic CaissaChess pairings and standings.

2) Phil Brown vs. Meint Olthof. Round 4. Mr. Brown went about trading off all the pieces to reach this won pawn ending.

3) Andrew Eskenazi vs. Vendant Margale. Round 5. White has just played 33. a5 and another loose pawn goes running down the board.

5) Coleman Hoyt vs. Bill O'Neil, Round 5. White to move and win material or mate.

6) J.C. MacNeil vs. George Peschke. Round 5. White has just recaptured a Knight with 22. Qd2xd3. What does Black play now?It says here I am never losing to Mr. Peschke again. Of course I've said that the last 4 times we've played :-)

Thanks to all the players that made the DCC Fall Classic a great tournament.