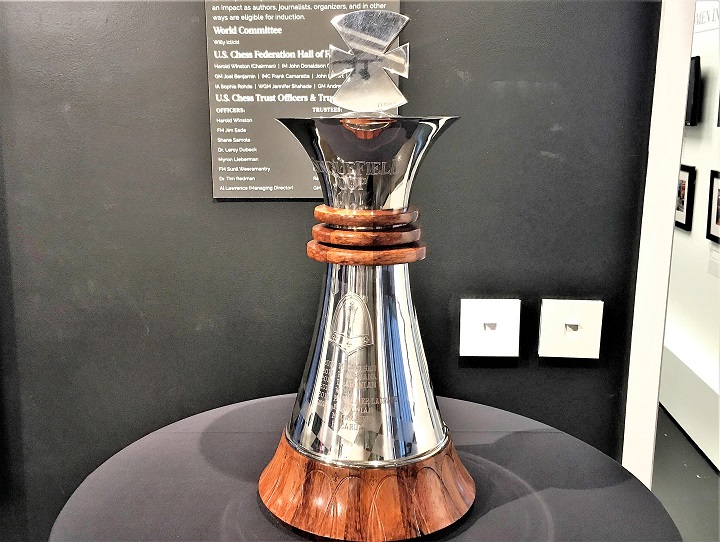 Ding Liren was quickly mobbed by fans all wanting pictures and he kindly obliged.

This is just great. John Brezina, Colorado's own world-traveling chess reporter, has again brought us another remarkable report from St Louis, the chess capital of the United States. Of course, he also took terrific photos and again includes video of games in progress. Needless to say, I am more than happy to select and caption the pictures interspersed with Mr. Brezina's commentary. The heading photo is the Sinquefield Cup. Where year by year the winners of the tournament have their names inscribed. Nothing but class from Rex and Jeanne Sinquefield.
Quoting John Brezina: "The Sinquefield Cup, the tournament that brought me back into chess, returns for its seventh year. My favorite annual tournament returns bigger and better, this year boasting a total of twelve players including World Champion Magnus Carlsen. Eleven rounds of classical chess plus many side events starting with the fan favorite autograph session. A great opportunity for fans to get up close and personal with their favorite players." 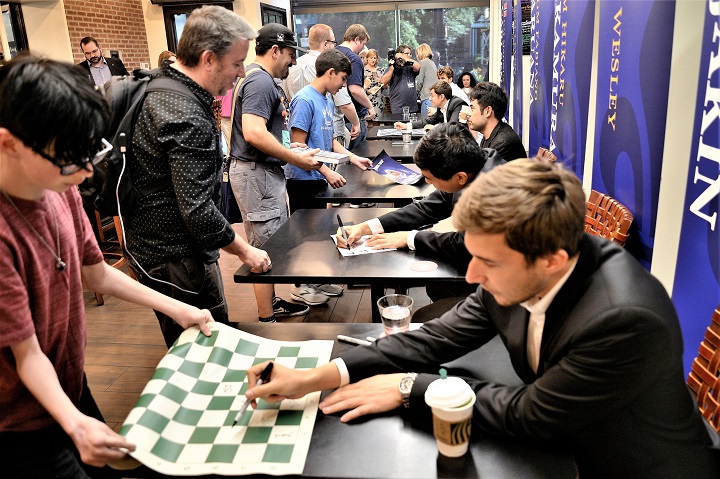 GM Sergey Karjakin about to autograph a young fans board.
"I met many new faces again as this two week chess extravaganza has turned into vacation trips for many chess fans. The opening ceremony was tied into the Rapid & Blitz closing ceremony for the first time as several players would participate in both tournaments. Maurice Ashley introduced all the players first and then Rex & Jeanne Sinquefield each spoke briefly before chief arbiter Chris Bird announced the round one pairings." 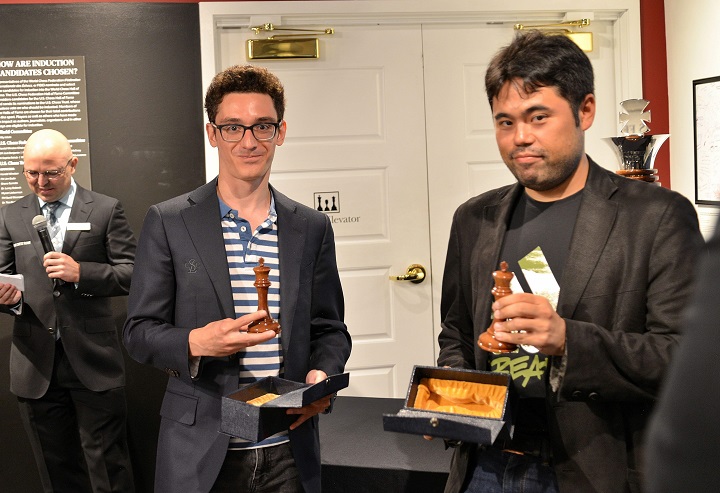 GM's  Fabiano Caruana and Hikaru Nakamura with commemorative pairing number pieces.
"While Rex gets much deserved attention for his chess contributions, Dr. Jeanne does much for chess including starting the Scouts Chess Merit Badge which recently surpassed 250,000 kids! She also recently wrote "Learn to Read & Write Chess" and has graciously allowed me to share the PDF file attached here ." 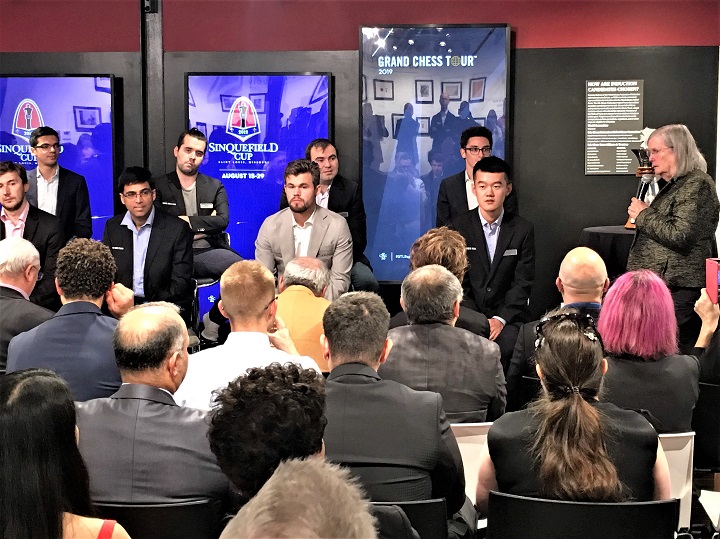 Dr. Jeanne Sinquefield speaking at the opening ceremony.
"I returned to St. Louis for the final two rounds where Ding Liren and Ian Nepomniachtchi were leading the pack with 5.5 points. Magnus was a full point back having drawn all his games, extending his classical streak to nearly ninety games without a loss. After round five on the players rest day, Magnus was invited to throw out the ceremonial first pitch at the Cardinals vs. Rockies game." 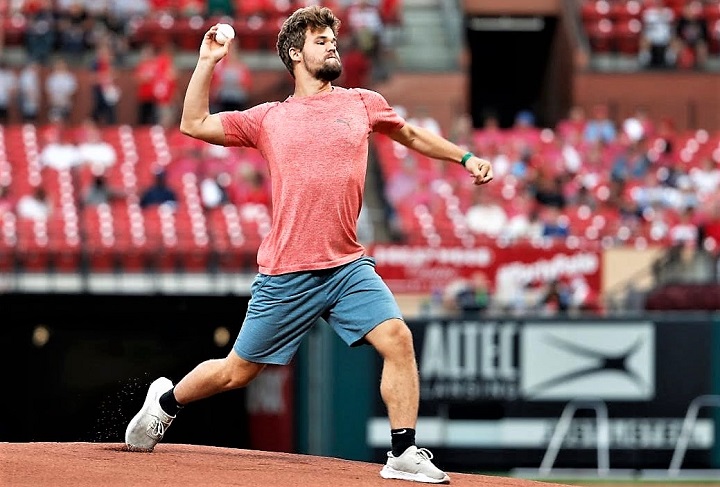 Colorado Rockies are probably going to try to sign this guy :-)
"Before the start of round ten artists from the St. Louis Community College were inspired by the world's largest chess piece and had a small art show near the chess club." 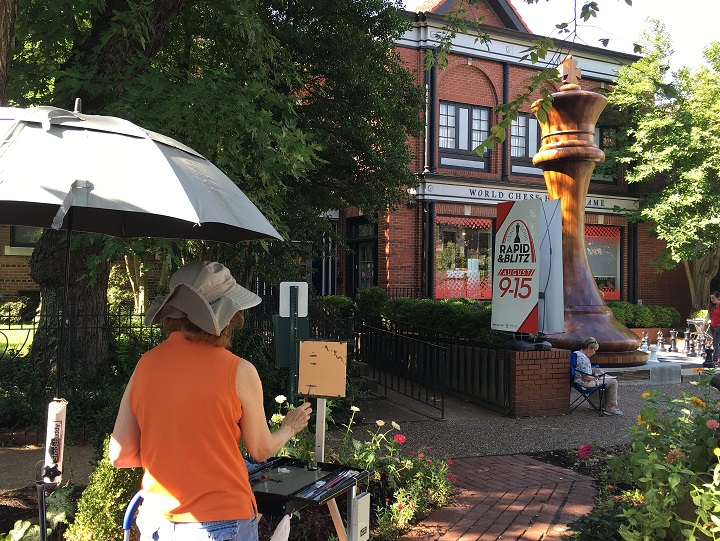 Local artists are inspired by the world's largest chess piece.
"The penultimate round had Maxime Vachier Lagrave defeat Ian Nepomniachtchi after blundering away his knight and showing much disgust with himself. Rapid & Blitz winner Levon Aronian settled for a quiet draw with Ding Liren which put the Chinese number one in the sole lead for the final round." 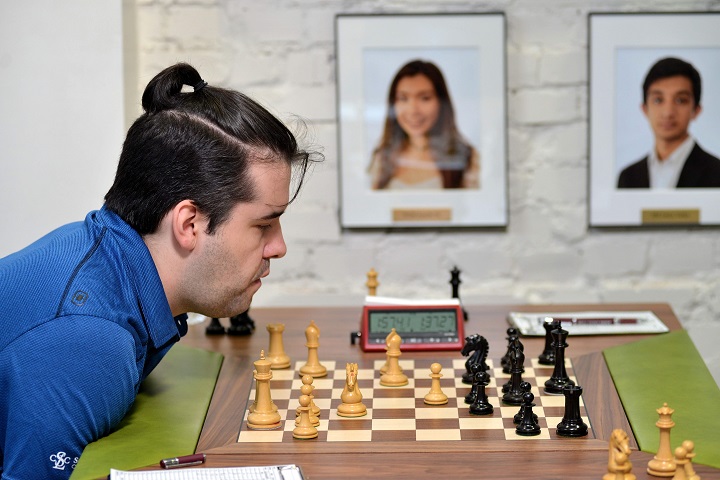 GM Nepomniachtchi getting up close and personal with his pieces... 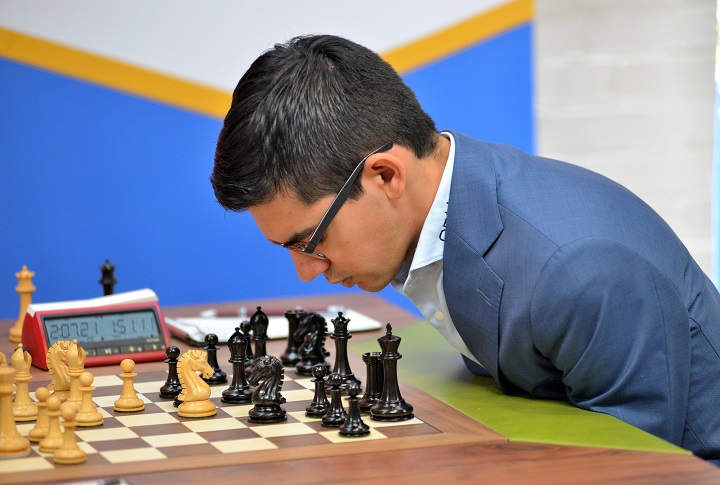 ... as is GM Giri
"But the most excitement came from the World Champion's board where he would grind down Wesley So in a rook endgame and run his pawns down the board for his first victory. This put Magnus just half a point behind first for the final round and was all smiles after his interview with Maurice Ashley. Despite his loss, Wesley was still gracious by signing autographs shortly after his game." 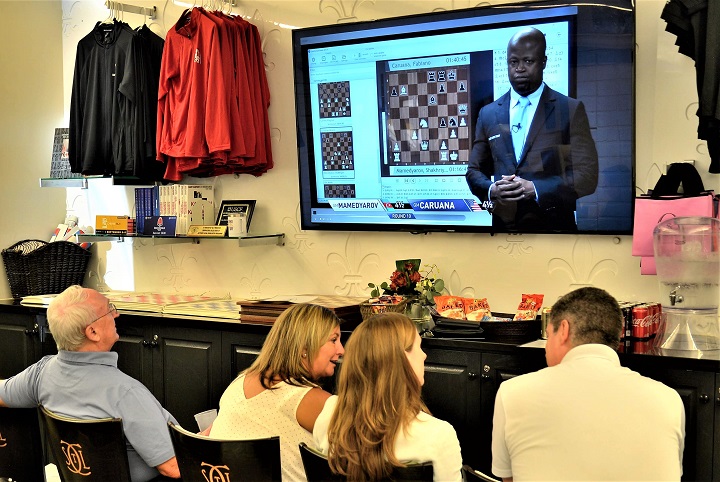 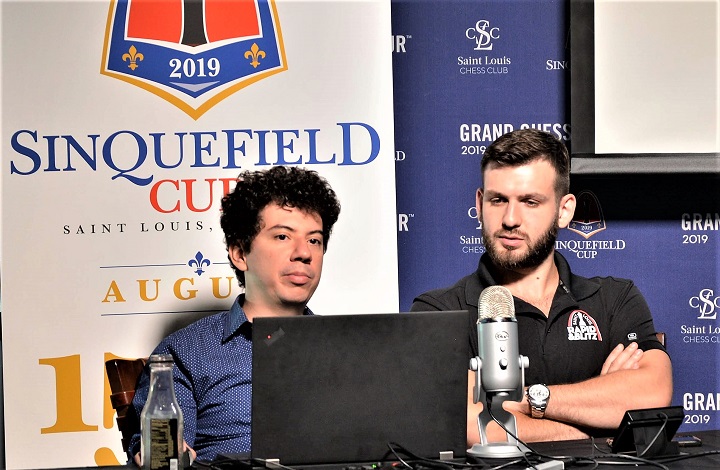 Alejandro Ramirez and Cristian Chirila doing analysis of the games.
"The two former world champion challengers Karjakin and Caruana ground down into a long draw while Nakamura & Anand settled for a quick draw. Hikaru was kind enough to join Cristian Chirila right afterwards to analyze his and the remaining games in play. Wesley So and Aronian also settled for a quick draw as both would finish tied for last place. Ian Nepomniachtchi would blunder yet again in a rook endgame that should have been drawn against Anish Giri. A victim of his own quick play sometimes and a surprise finish after such a strong start." 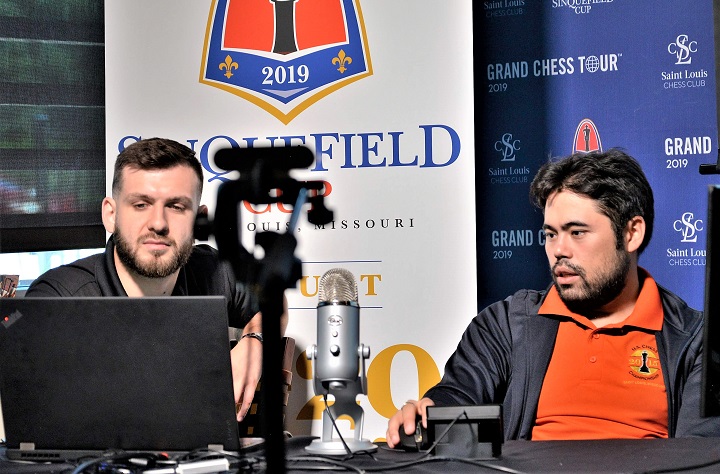 GM Nakamura might be thinking did I really make that move :-)
Magnus Carlsen kept the pressure on Maxime Vachier Lagrave and after a piece exchange and tucking his own King in the corner, won his second game in a row and temporarily put himself in first place." 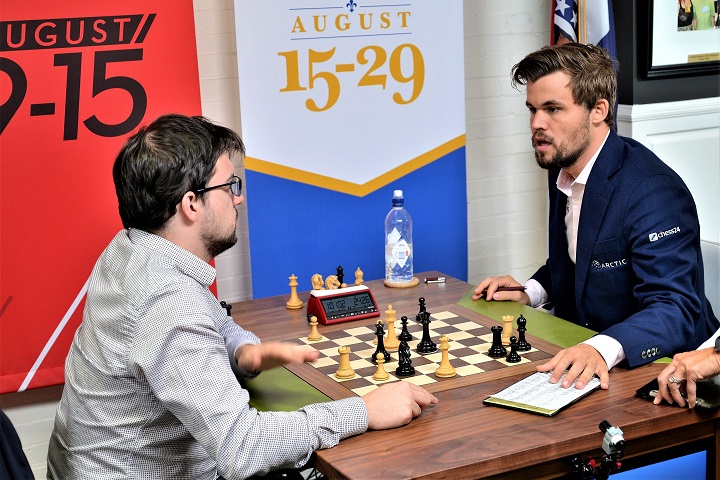 GM Carlsen had a strong finish to tie for 1st place.
"The attention turned to the Ding Liren and Shak Mamedyarov game that would decide Ding's fate. He played it safe from the beginning despite knowing a win would secure first and held onto the draw which set up an early morning tie break the next day." 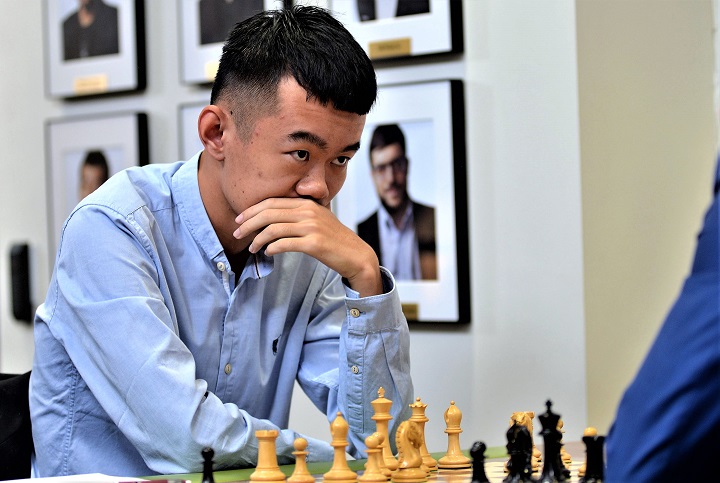 GM Liren with an intimidating glare across the board.
"The World Chess Hall of Fame across the street from the chess club is not to be missed. In addition to beautiful and professional exhibits and a wonderful shopping store, the monthly music shows are a nice bonus. I was able to attend the show of a local band after round eleven, Brothers Lazaroff."

Post tournament entertainment.
"They convert the upstairs exhibit to a concert venue with seating for about one hundred, even rolling out a baby grand piano. Many of the players and other chess dignitaries attended to relax after such a long tournament. However, two players would not relax that evening as they prepared for the first Sinquefield Cup tie breaks. The games would start at an early 10:00am as Ultimate Moves was scheduled for early afternoon." 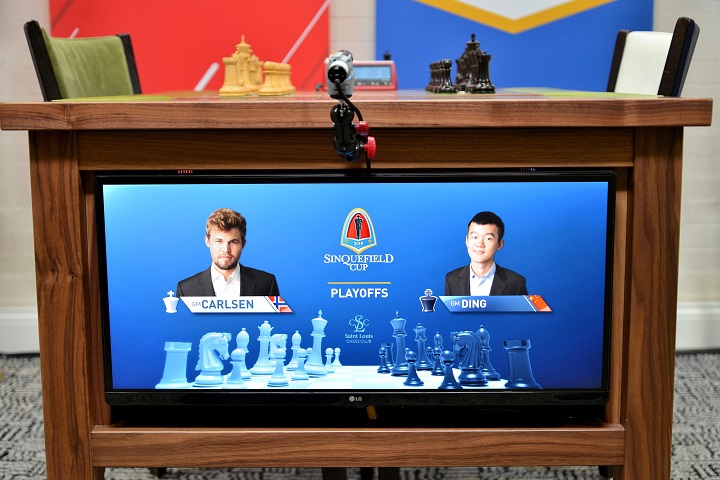 THe snazzy electronic table is set up and ready for the playoff.
"I arrived early the next day as fans lined up outside the club. A crowd slowly formed upstairs to watch the first of two rapid games followed by two blitz games. Ding Liren showed up early as he always does trying to mentally prepare for the world champion. Magnus showed up last minute as he makes his presence known and is always fast paced. And after a quick run down of the rules by chief arbiter Chris Bird, a handshake started playoff game number one." 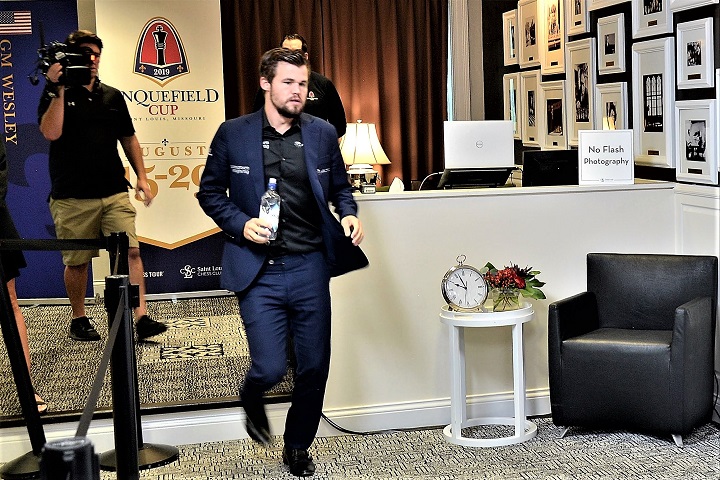 GM Carlsen hurrying to the board,,, 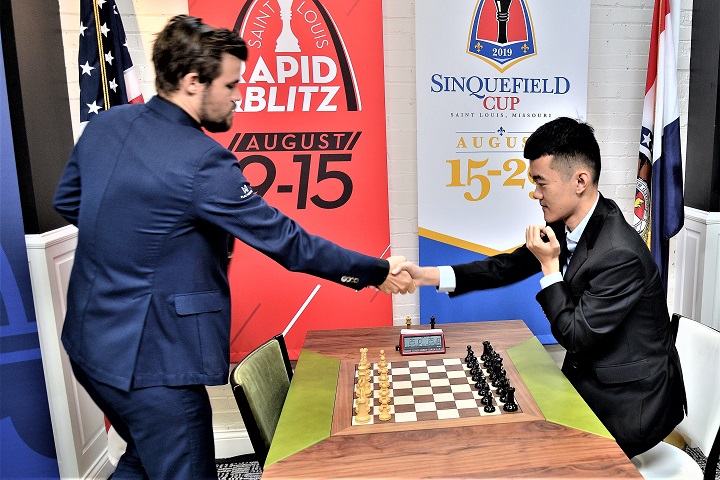 ...and they are into the playoff games.
"Both rapid games ended in relatively expected draws forcing the blitz games. Of course Magnus was heavily favored in the blitz format, not losing a playoff in over a decade. However lightning struck in game one. With a better position on the board, Ding had trouble finishing the win and then the unthinkable happened. The world champion flagged his clock and the loss put him in the uncommon situation of a must win final game. Magnus would have the white pieces for game two and appeared at the board unusually early and in deep play mode." 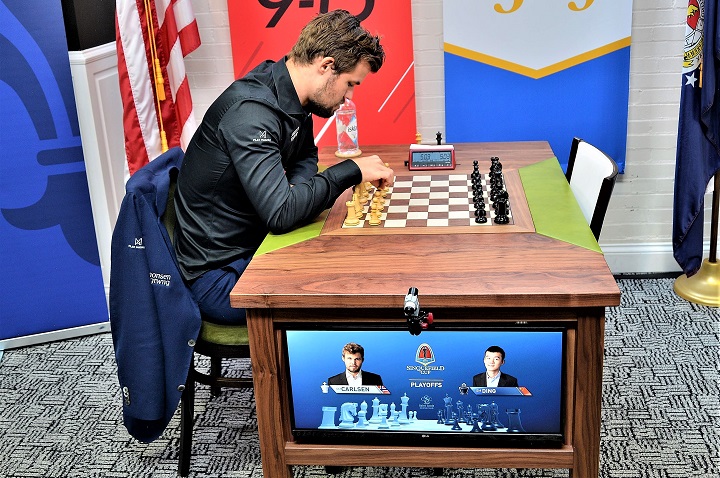 Knowing he has a really tough opponent.
"The game turned into a tactical battle as Ding had two bishops, knight and rook working in harmony against a queen, bishop and knight. Controlling the long diagonal, the bishop and rook were unleashed by the knight on move forty forcing checkmate or exchanging the queen. A brilliant win by Ding Liren as even Magnus seemed impressed by the beauty of the position and graciously resigned with a bit of a smile." 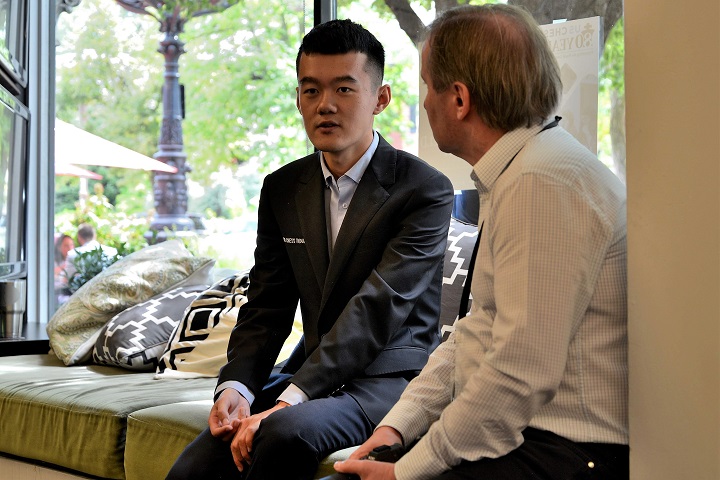 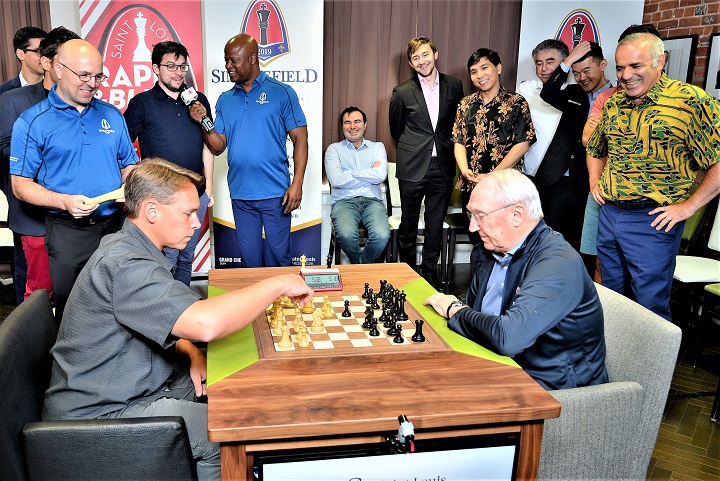 The fun and entertaining for all Ultimate Moves event with Rex and son Randy at the board.
"Rex and his son Randy each pick a team of the best players in the world  where all take turns moving in a six game blitz format match. Mostly for bragging rights and a little fun and relaxation. Seeing the players in a relaxed mood and trash talking amongst rivals is a treat. The usual serious faces turn to smiles and laughter yet the fighter in some players is hard to hide. And extra special this year was the attendance of Garry Kasparov" 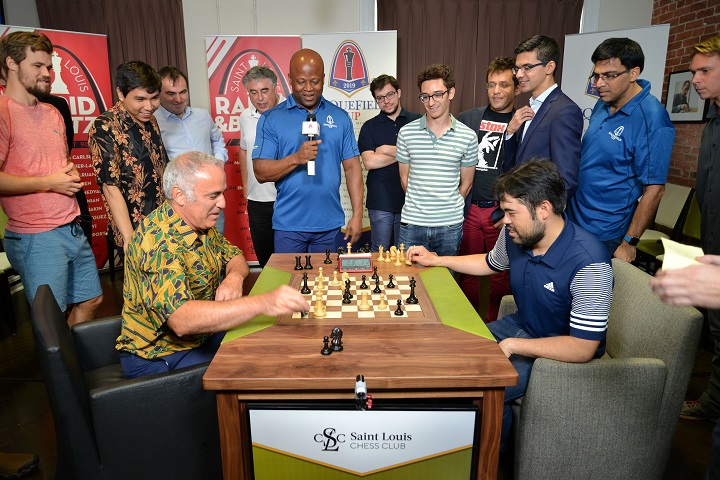 Special guest GM Garry Kasparov at the board with GM Nakamura while... 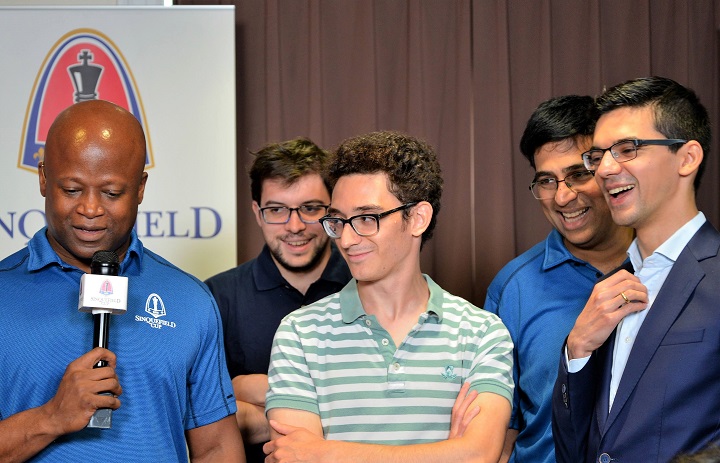 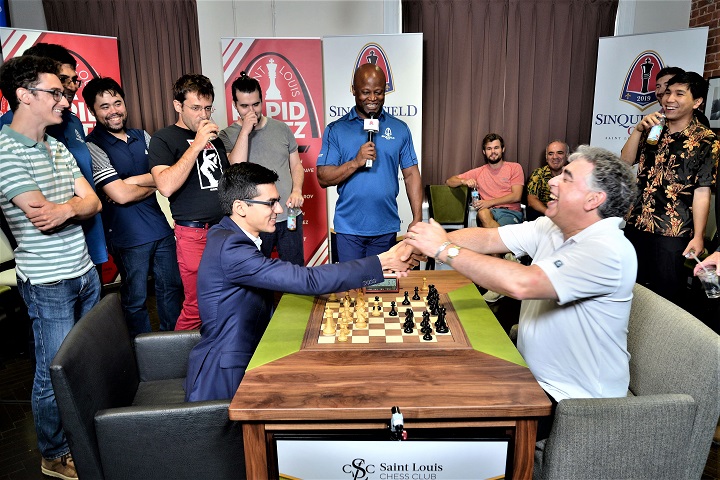 ... and here everyone is being entertained by GM Anish Giri and GM Yasser Seirawan
"GM Kasparov arrived early for his 960 tournament joining fellow players and then later speaking at the closing ceremony . After all the jabs on and off the board team Randy came out victorious. Afterwards a special treat was catching a casual game between the Russian commentary team of GM Evgeny Miroshnichenko and WGM Almira Skripchenko. Later that evening I met a gentleman Carlos Perdomo, an International Master who founded chessatlanta.com  and teaches chess throughout the Atlanta metro area." 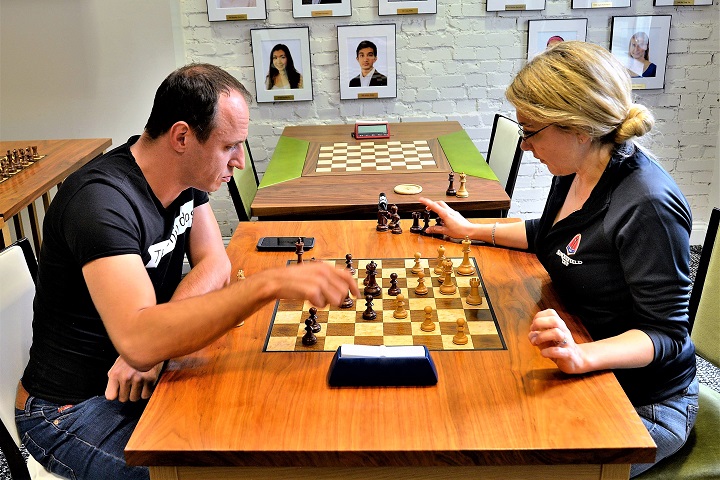 The commentary team of GM Evgeny Miroshnichenko and WGM Almira Skripchenko playing some casual chess.
"The closing ceremony took place later that evening making for quite a long day. Maurice Ashley hosted the event and a number of speeches included Garry Kasparov who praised the players and the elite level of chess. Afterwards Rex & Jeanne presented Ding Liren with the Sinquefield Cup where it was heartwarming to see his mother taking a photo of her son with a big smile holding the trophy." 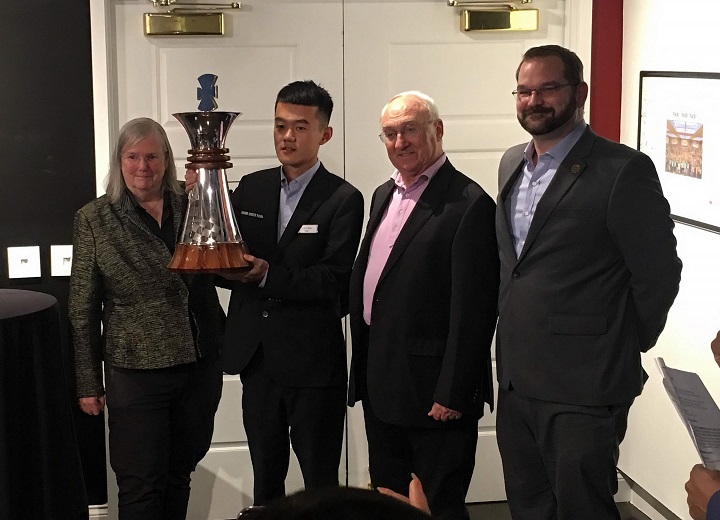 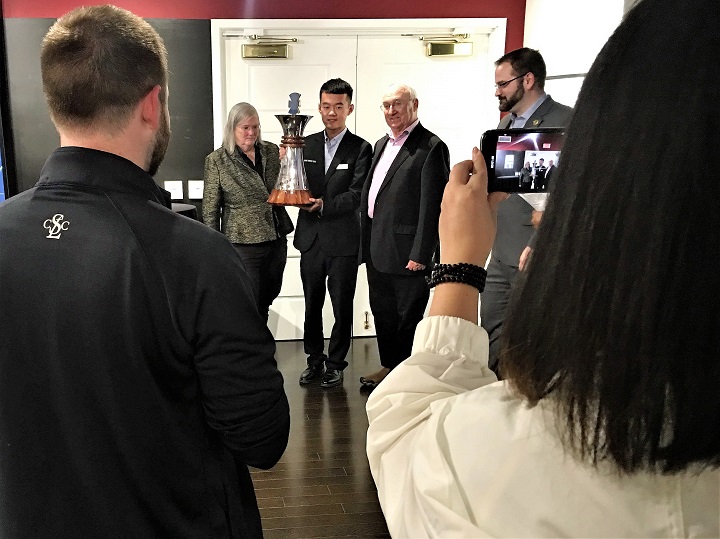 ...while his equally proud mom takes pictures to show off back home.
"Another great tournament that all chess players should attend once, the Superbowl of chess. Later at the hotel my good friend John from St. Louis and others joined up for some late night pool and jazz. Anish Giri and his trainer Vladimir Chuchelov were a joy to talk with along with Almira and Evgeny. For fans of Hikaru Nakamura, some might know that he is an avid hiker."

Hikaru Nakamura high atop the Rocky Mountains.
"Of special note was that Hikaru was hiking ten of Colorado's 14ers shortly before the start of the Sinquefield Cup. A great way to train for such a long tournament! My early morning flight back to Denver Friday morning was interesting too. While sitting there at my gate, I look over and see the Sinquefield Cup champion Ding Liren and his mother. So just before boarding my flight I gave one last congratulation to the new champ." 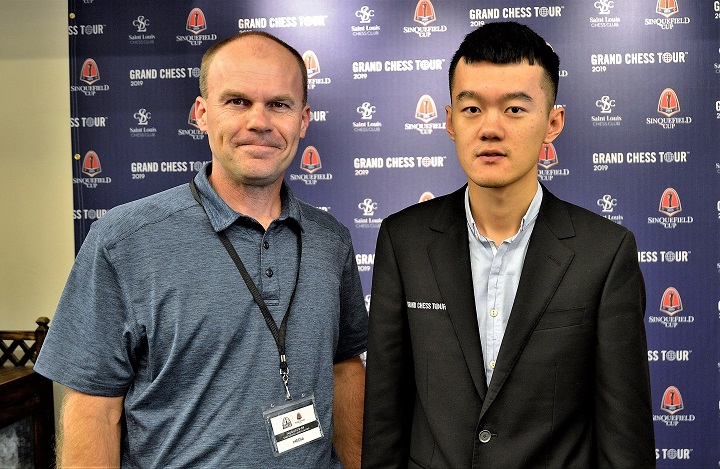 John Brezina with GM Ding Liren.
"Thanks again to JC MacNeil for helping me put this together. Mark your calendars for the final Parker Chess Club tournament of the year. Sunday, November 3, 2019, at 2:00pm. In addition to trophies, the grand prize will be a signed vinyl 2019 Sinquefield Cup board by World Champion Magnus Carlsen. Good luck! Until next time...
John Brezina, Parker Chess Club"
Again, Mr. Brezina, it is me and all of Colorado who is thanking you for the great photography and commentary.