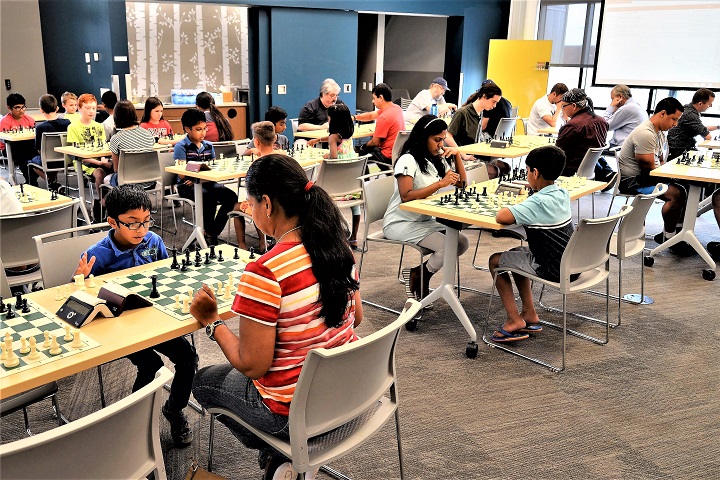 John Brezina brings us images and commentary on the third leg of the FIDE Grand Chess Tour, held recently in Paris, France. Once again, I am thrilled to have the liberty of selecting and captioning the excellent pictures Mr. Brezina takes at the world-class chess events that he attends. This report also includes pictures and a summary of his casual, just for fun, Parker Chess Club tournament. No grandmasters, but plenty of enthusiastic kids and local Colorado adults. The heading photo is the Parker tournament in progress... 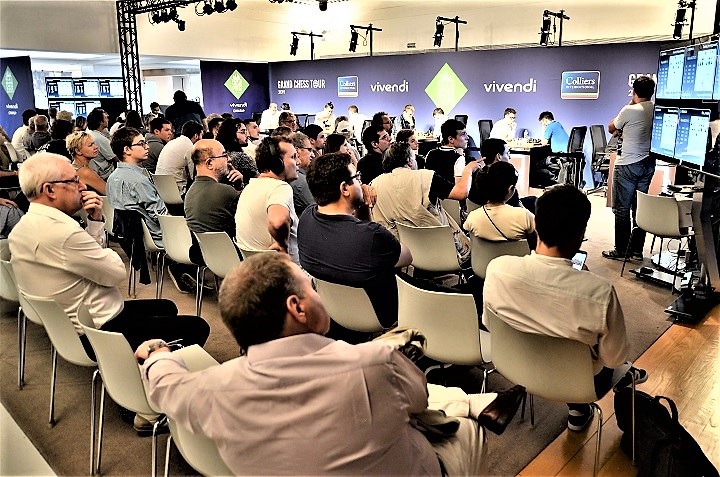 ... and here is a full house viewing the Paris Grand Chess Tour games.

Quoting John Brezina: "Hello, Colorado chess fans. Who says chess slows down in the summer? Once again I had the privilege to travel overseas and attend the Paris leg of the Grand Chess Tour. Extra special this year was that my wife and two daughters joined me for the ultimate "chess vacation". 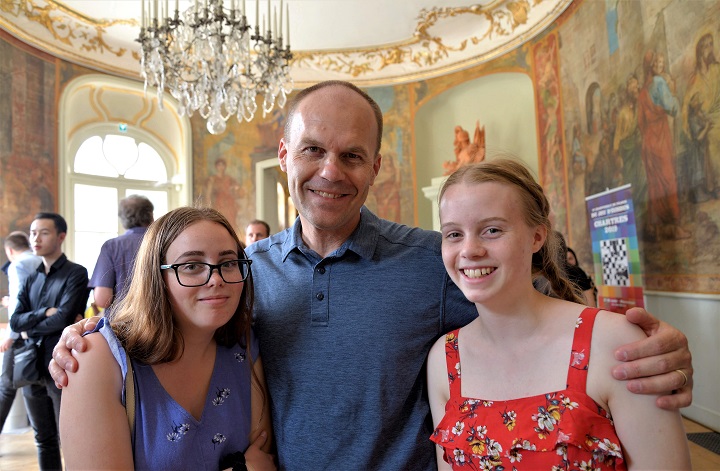 John Brezina with his two lovely daughters. Lauren and Emily, in Paris.

"Before we get to that, I just finished my fourth Parker Chess Club tournament. The unrated quarterly tournament is a five-round G/10 format that only requires a short afternoon and provides some tough competition. The Championship section was a strong field of twelve players who battled for a signed copy of Sunil Weeramantry's, "Great Moves: Learning Chess Through History". 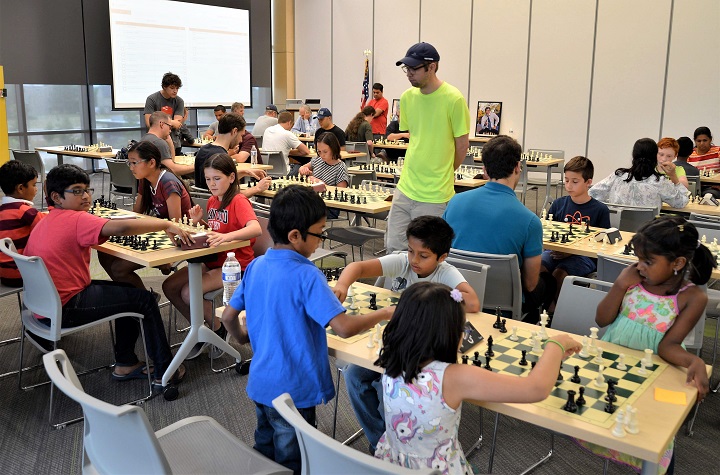 Tournament Director, Kevin Seidler keeping an eye on the games.

"The Open section had another twenty-four players of all ages which played for trophies. Kevin Seidler was kind enough to join me in running another fine tournament and his use of Caissa Chess software and TD skills were invaluable, thank you. And the Caissa Chess author himself, Dean Clow, not only helped but played in the Championship section." 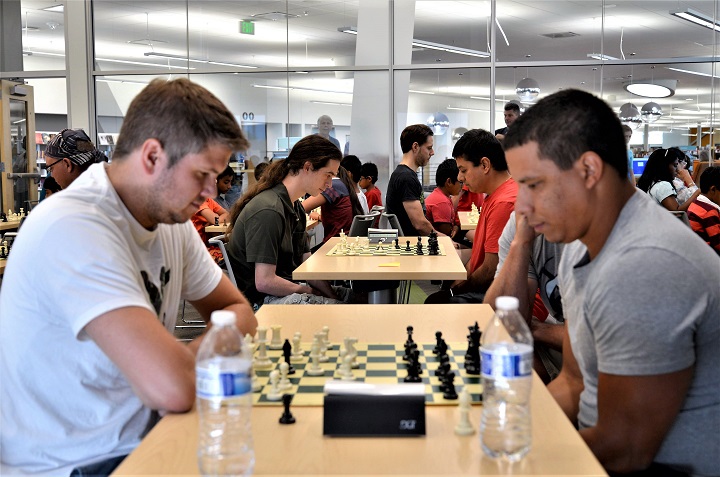 "Other DCC patrons included Dwight Sehler, Jason McEwen, and Roberto Popa. Round 5 paired undefeated Dwight Sehler with Michael Maloney from Idaho Springs. A draw would assure Dwight clear 1st place, but Michael prevailed and won, along with Dean Clow in his final game, resulting in a three-way tie with four points each. Caissa declared Dwight Sehler the winner on tie breaks." "The Open section had many young up and coming chess players. Parents and even one grandparent joined and what a pleasure to watch the young and old play together." 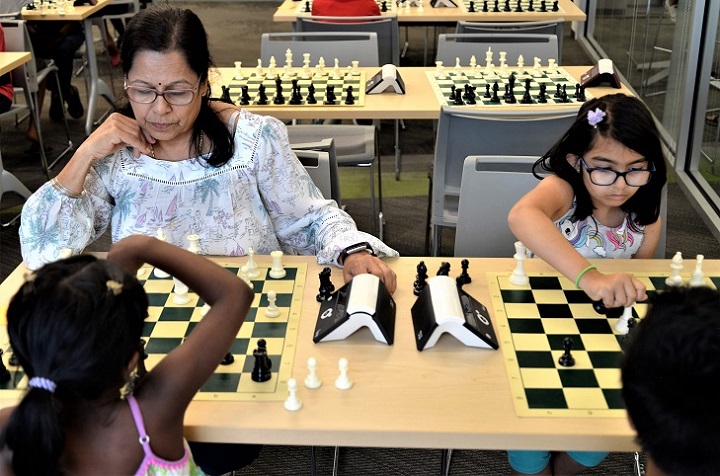 Grandmother Charu Dande, playing alongside her granddaughter. Anika, and just how cool is that :-)

"Many regular Parker Chess Club players showed up along with some new faces including the winner Maxim Kaikov who went undefeated. New to the club, sisters Jaydeen and Ellie Post did very well for their first tournament. The kids would take all three top spots. Kumaran Lenin with second place and club regular Darshan Satishkumar in third place." 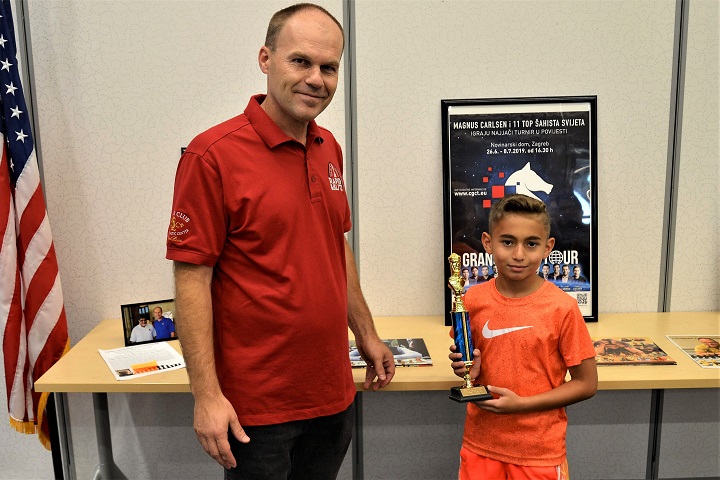 Kumaran Lenin, about to receive his 2nd place trophy. 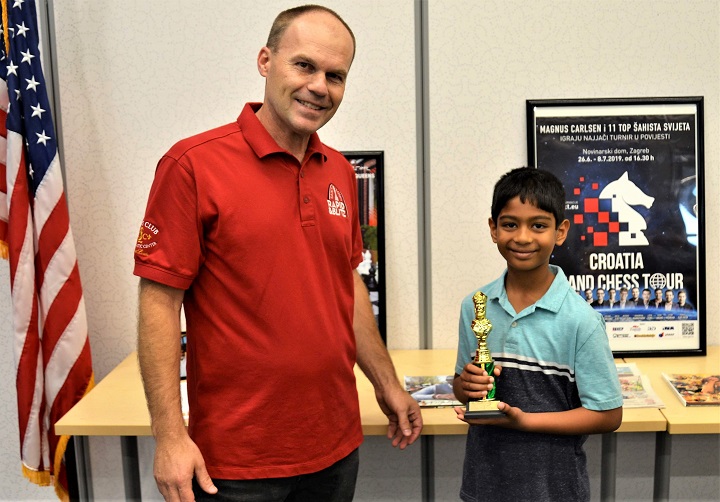 A smiling John Brezina and a happy Darshan Satishkumar with the 3rd place trophy.

"This has become a tournament that I enjoy doing primarily for kids to give them tournament experience but an added bonus has been seeing so many stronger players participate. I noticed many younger players watching the Championship games after their own, a great opportunity and education. I am already looking forward to the final tournament later this year." It's great to see kids like this young man... ... and this young lady playing chess,

See all of Mr. Brezina's great pictures   from his Parker Chess Club tournament.

Bon voyage Parker and bonjour Paris! "The next day we flew to the beautiful French capital of Paris, one of my favorites. The third leg of the Grand Chess Tour goes back to the Rapid & Blitz format and included three wild card players, GM Grischuk, GM Duda, and GM Dubov." 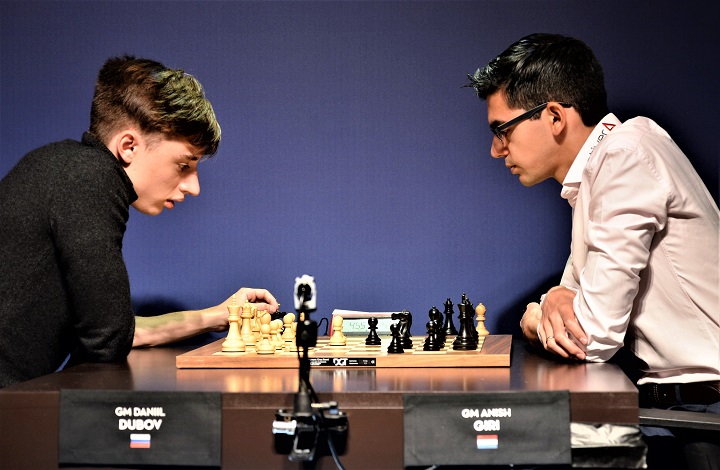 "One of the main sponsors Vivendi, allowed their main headquarters to be the playing venue which was spectator friendly this year. And what a location, just a block from the famous Arc de Triomphe and the world's most beautiful avenue, the Champs-Elysees." Our intrepid reporter, John Brezina on location at the French Chess Federation headquarters.

"While we missed the first two days of Rapid play, the rest day in between had the Corporate Day at the Vivendi headquarters in addition to the beautiful French Chess Federation headquarters at Chateau d' Asnieres. At the Chateau six players gave simuls to ten players each." 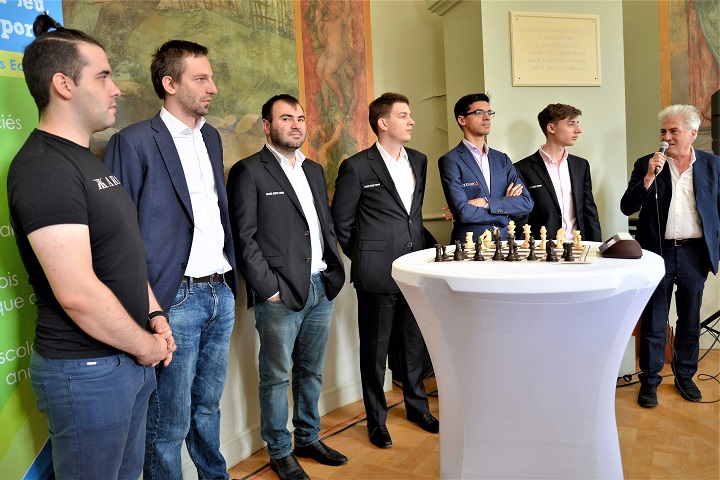 Bachar Kouatly, introducing the GM's who would be doing the 10 board simuls.

"Many local French players including some sponsors and stronger young players were invited. I was lucky enough to get a seat at GM Anish Giri's table. Before the simul the players mingled with everyone and allowed fans to get a picture or autograph. Then the President of the French Chess Federation, Bachar Kouatly, introduced all six players. GM's Alexander Grischuk, Ian Nepomniachtchi, Daniil Dubov, Jan Duda, Shak Mamedyarov, and Anish Giri." 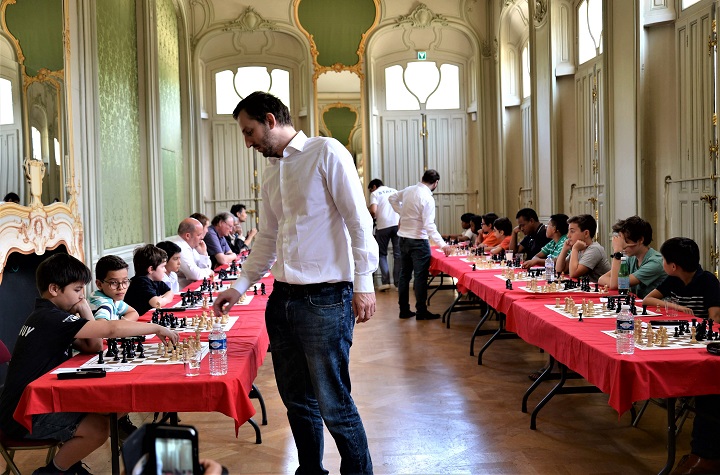 "The players made relatively quick work of us mortals, although some had put up valiant efforts. With only ten players I must say that GM Giri seemed to reappear at my board much quicker than I would have liked." 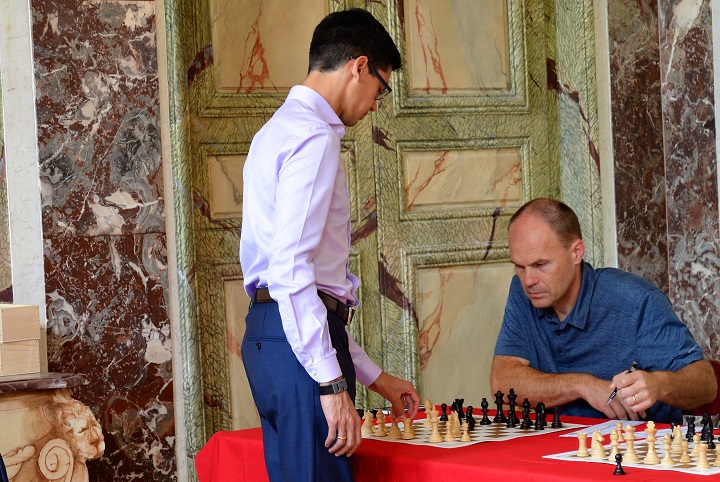 "Back at Vivendi, while the simul was going on, the Corporate Biz Cup was taking place. The top four corporate donors were paired up with GM's Hikaru Nakamura, Vishy Anand, Fabiano Caruana, and Maxime Vachier Lagrave. They played a round-robin blitz where they took turns making moves and could collaborate moves at certain times." "We were only able to catch the last two rounds after attending the simul. Then afterward the other six players from the simul returned so the full roster could take official photos and mingle with the sponsors. The beautiful rooftop gardens of the Vivendi headquarters provided great photos of the Arc de Triomphe." 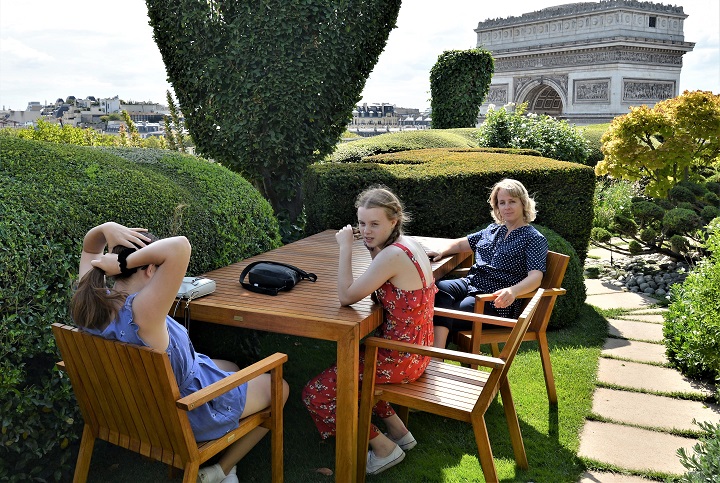 Mr. Brezina's wife, Michelle, relaxing with her daughters in the rooftop gardens... ... as were a few of the tournament players.

"The start of the Blitz rounds had French favorite Maxime Vachier Lagrave leading after the Rapids. Entering from the street you were greeted in the lobby by security and given a wrist band. Each day capacity was about 100 and tickets were offered for free in advance, very nice of the organizers. The seating was very well laid out and screens on either side let you watch each game more closely." Fans waiting for play to begin... 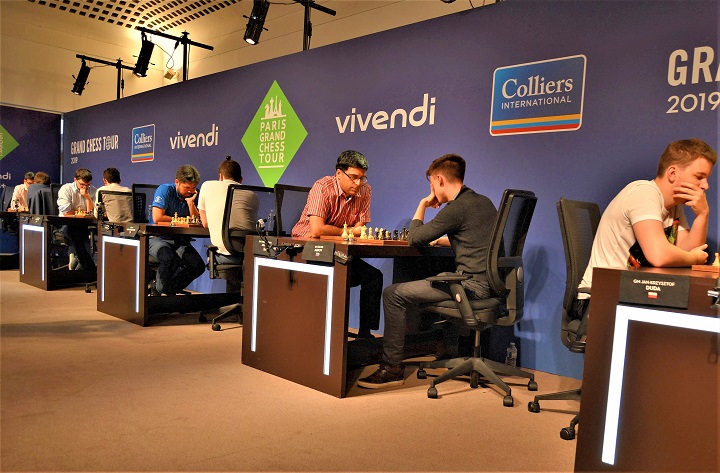 ... and the players are at the boards and blitzing away :-)

"Between the nine rounds each day, lucky fans could occasionally catch their favorite players autograph or picture in the lobby area. Many of the players would opt for a quick walk down the street for fresh air between rounds as well. After the first day of Blitz MVL would retain his overall lead by 2 points despite scoring only fifty percent. Blitz favorite Nakamura scored best with 6.5 points yet trailed overall by 3 points." The great chess tradition of a handshake before the game begins.

"Maurice Ashley was on set in Paris broadcasting back to St. Louis to the team of Peter Svidler, Jennifer Shahade and Alejandro Ramirez. Well worth going back and watching their commentary as GM Svidler is always fun to watch and learn from." Try this YouTube link https://www.youtube.com/watch?v=YoUoKZuhL8U 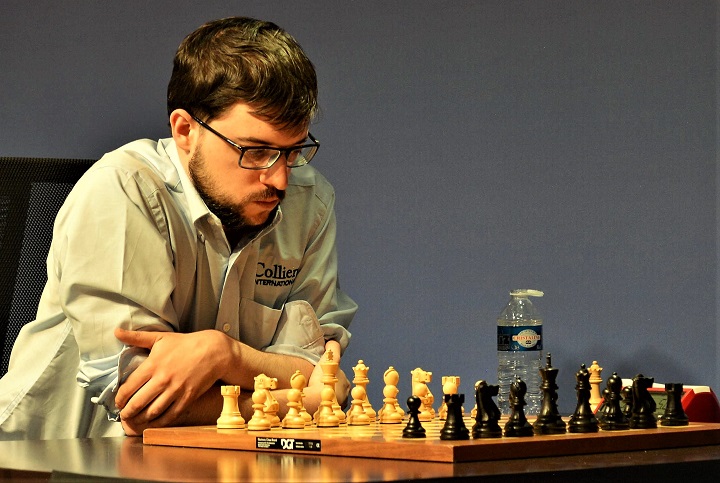 "Day five and the final rounds would generate excitement up until the end. The tournament hall was filled to capacity and most eyes were on the leader board where French favorite Maxime Vachier Lagrave defended his lead. After eight rounds and only 3 points gained by MVL, three others had chances to finish in first." GM Anand, the Tiger from India, finished in 2nd place. Only a half point off the lead.

"Just half a point behind were the Russians GM Nepo and GM Grischuk, followed closely by GM Anand. Final pairings would have Anand vs. Nepo, Grischuk vs. Caruana, and MVL vs. Mamedyarov, any of which could act as spoilers. While it is said blitz is for the young, forty nine year old Vishy Anand secured 2th place by defeating Nepo in the final game." 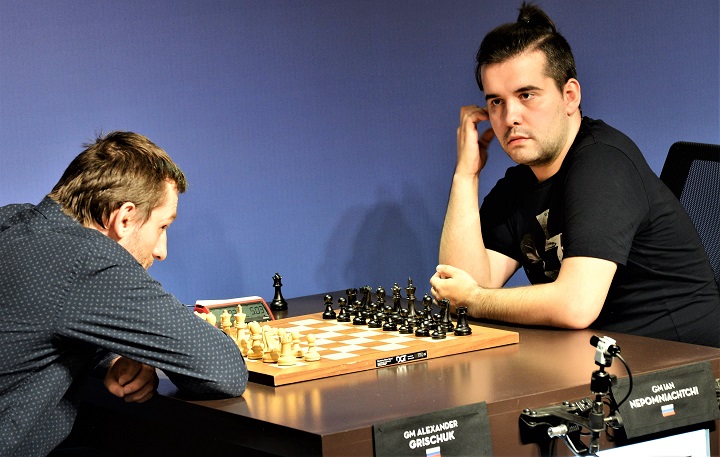 GM Grischuk, and GM Nepomniachtchi tied for 3rd and 4th place. Only one point separated the top 4 players at the end.

"An anxious MVL would try to catch quick glimpses of the other games to see what he needed to secure first place. A stunned Grischuk who was very low on time watched helplessly as Caruana nursed his pawn to the promotion square and claimed victory. With little time left in their game, MVL then got up from his board to a stunned crowd and ran to the screens to see final results." "Seeing and calculating very quickly that he only needed a draw, he returned to the board and offered Mamedyarov a draw. Initially a little hesitant and perhaps disappointed that his earlier promising position had slipped away, Shak accepted and Maxime Vachier Lagrave is our new Paris GCT Champion!" The famed Arc de Triomphe as seen from the rooftop gardens.

"Another great tournament in one of the world's best cities. The people of Paris could not have been more welcoming and kind everywhere we traveled. Many thanks to the organizers and sponsors of The Grand Chess Tour for their generosity and kindness. What a treat for chess fans to watch such elite players and a great opportunity for the players to earn considerable prize money. The next two legs come back to St. Louis and will both feature World Champion Magnus Carlsen."

See all of Mr. Brezina's terrific photos from this great event. 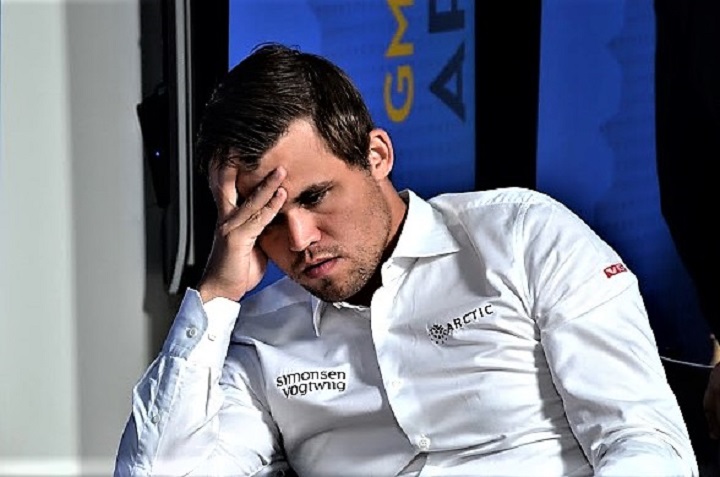 The best of the best will be back in St Louis soon.

"And just checking our upcoming tournaments in Colorado, there are many opportunities to play chess and meet other players right here. So what are you waiting for? Thanks to all the local organizers that put these tournaments together. Finally, I'm amazed how often people are not aware of some great local online resources including Coloradochess.com and Denverchess.com. Both are great and link to many others including the Colorado Chess Informant . Check them out and stay informed... Au revoir!" - John Brezina Parker Chess Club

I, and I am sure all of Colorado, thanks you kindly for these reports, Mr. Brezina. Not to mention the fantastic photography that highlights the story.