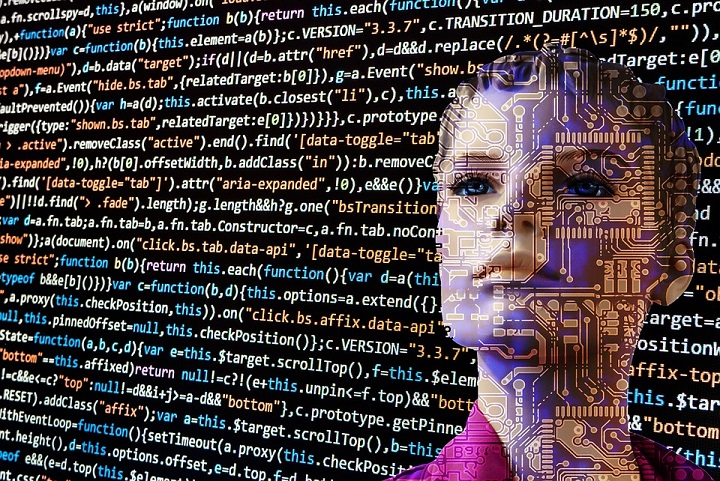 “There is no remorse like the remorse of chess.” – H. G. Wells

In the latest Colorado Informant Curtis Carlson has selected chess quotes in his article, "Memories of 1977 & 1978" First, I'm impressed that he has "scores of memories from a half-century of chess". I can't remember the game I played last night, let alone a chess game I might have played 40 years ago :-) Mr. Carlson goes on to say "... my thoughts often drift into struggles from decades ago and what might have been." I think we all have that if only feeling from time to time. Not only from our chess games but from life in general. Expressed so perfectly by Robert Frost in his famous poem "The Road Not Taken"

Quoting Robert Frost: "...and I -- I took the one less traveled by, and that has made all the difference."

I thought I'd lead off this month's report with a few of the great quotes that Mr. Carlson used in his Colorado Informant article and how they made me think and feel about chess. Mr. Carlson's article and the games he includes are well worth your time to review and enjoy.

Quoting IM Erik Kislik: “While emotions play a role in most decision-making, logic must be at the core of the process.” and “Chess is an amazing game, teaching you everything from planning to patience to humility. One of my life goals is spreading knowledge about chess to the world.” If I may say, I feel that in some small way these DCC reports are also "spreading knowledge about chess." 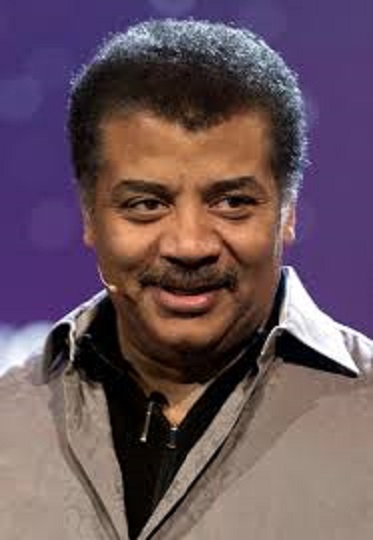 Quoting Neil deGrasse Tyson: “The good thing about science is that it’s true whether or not you believe in it.” Computer science has given us annotations that are the truth in any chess position. Quoting Steve Giddins: “The computer has shown us the extent of the defensive resources in chess, and top players nowadays are remarkably tenacious.” The machines are showing us things we haven't noticed in more than 400 years of recording chess games. Wikipedia - "The first documented chess game played with the modern queen and bishop moves; the moves were described in the poem Scachs d'amor. 1619: Greco–NN, Rome 1619." And I'm sure there were some scoresheets that got torn up before that :-) 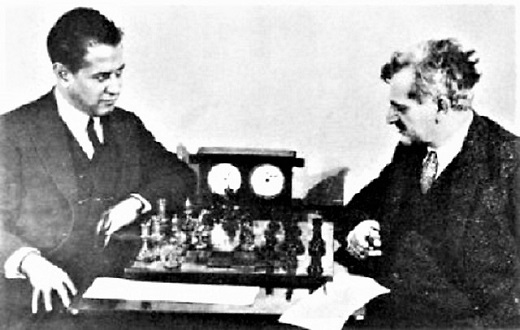 Two famous players from back in the day; Jose Capablanca and Emanuel Lasker.

Quoting GM Jan Timman: “...the computer showed the defensive margin in chess is much greater than had generally been thought, and even extremely bad positions could be held, if the defender knuckled down and did not commit further mistakes. It is true that one or two players from past generations had realized this years before, Emanuel Lasker being the outstanding example, but it was a lesson that escaped most players.” Sometimes saving a lost game is way more satisfying than winning with a brilliancy. 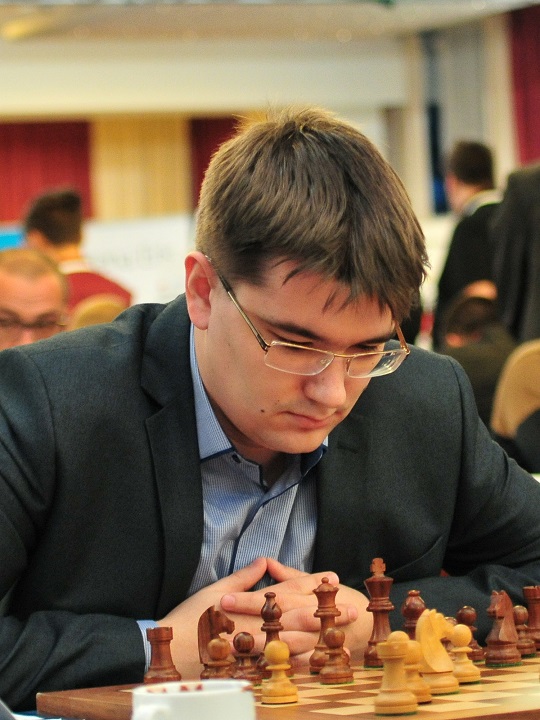 Quoting GM Evgeney Tomashevsky: “...during a game it is not often one achieves the same clarity of thought and boldness, which one acquires in front of the screen of a powerful computer...” and Quoting GM Alex Yermolinsky: “It’s like having a live-in strong player ready to get to work any time day or night, with no expense involved except for a slightly higher utility bill.” The computer programs are showing us possibilities in chess we didn't know existed. Mr. Carlson says, "More than anything programs are valuable truth seekers." 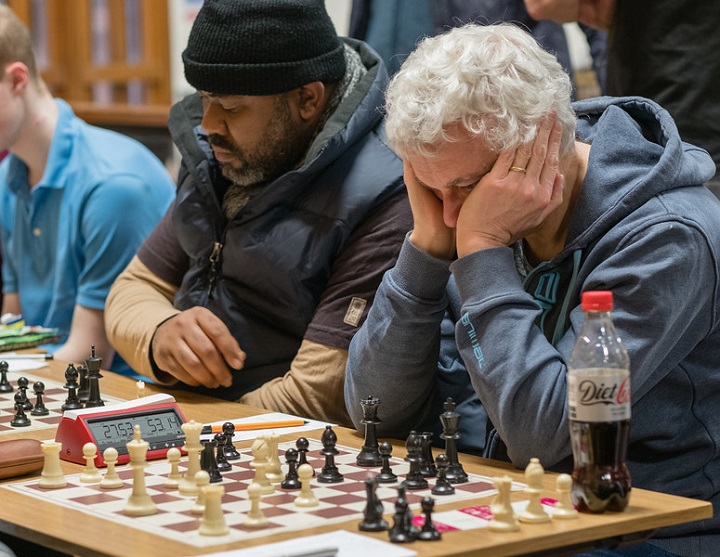 GM John Nunn with more time on the clock.

Quoting GM John Nunn: “The clock is just as much a part of the game as the board and pieces and losing because of time-trouble is no different than losing because of weak play - it’s still a zero on the scoresheet. The only difference is that, if you run very short of time, you will almost certainly lose; if you play more quickly, you may lose because of weak play, but then again you may not.” But we all like to use being in time trouble as an excuse for losing :-) Tme trouble doesn't affect a computer at all. 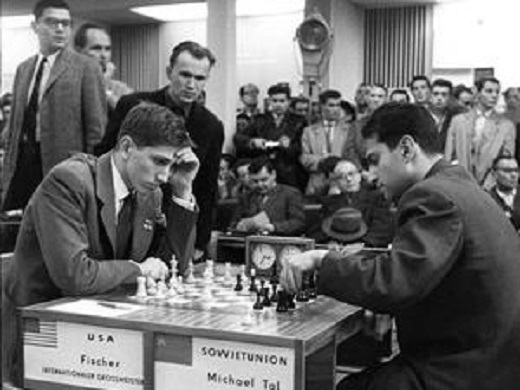 I couldn't resist adding this photo and a famous quote by my most favorite player of all time. Quoting GM Mikhail Tal: "When I asked Fischer why he had not played a certain move in our game, he replied: 'Well, you laughed when I wrote it down!" Maybe this photo is from that game. 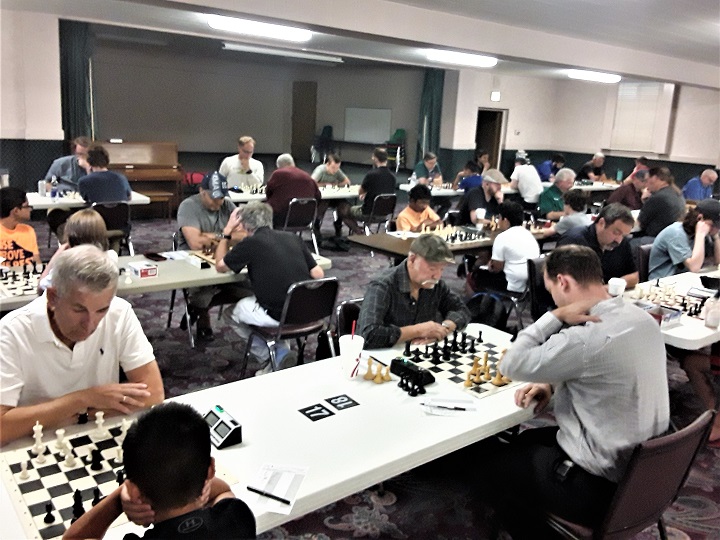 The DCC July 2019 tournament in progress .

On with who won what this month at the Denver Chess Club. Does Brian Wall have his mojo back? I would say so. He takes clear 1st place in the Premier section with 4 wins. Only losing to a well-played game by Neil Bhavikatti in round 2. I am sure he was most pleased to win his 4th round game against Richard Shtivelband. The DCC President wins 119 dollars for his fine performance. (see diagrams #1 thru #4 below) 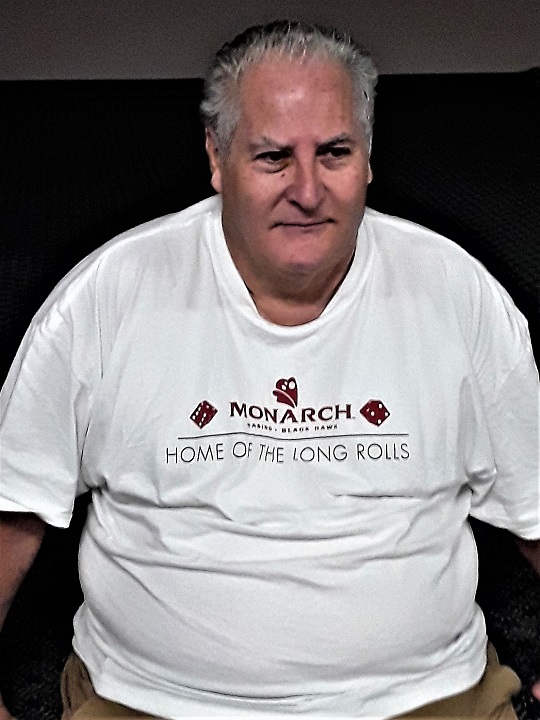 DCC President, Brian Wall, has got his mojo back.

Richard, Neil, and Sullivan McConnell all finished with 3.5 points and they share the combined 2nd and 3rd place prize money of 116 dollars. Richard says his game against Kevin Seidler in round 5 was "... by far the best game I've played in Colorado since I arrived in 2017, and ranks as a top 5 and possibly a top 3 career game for me" Mr. Shtivelband plans to present this great game at a DCC lecture scheduled for August 20th from 6:00 - 6:55 PM at the DCC. Don't miss what is sure to be an entertaining and instructive analysis. (diagram #5)

Not only did the young Bhavikatti beat Brian Wall, but he also held Mr. Shtivelband to a draw in round 3. That's impressive. I think the USCF will have Sullivan with 4 points. But for prize purposes, it is DCC policy that only one bye counts for prize  money. The Premier 20 dollar Upset prize was won by Mukund Gurumurthi for his big 382 rating point difference win over Ben Gurka in round 1. 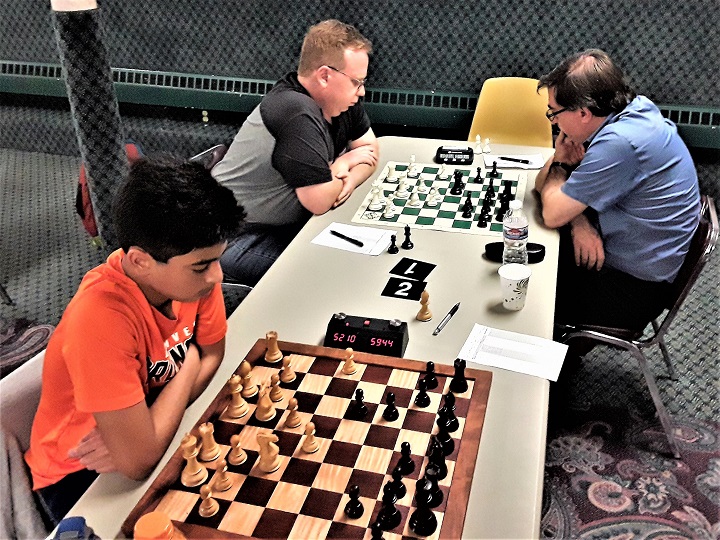 Jason McEwen had requested a last round bye in accordance with DCC policy, and that was all he needed to win the U1900 section with a 4.5 point final score. Mr. McEwen earns 108 dollars for his clear 1st place finish. Unrated Aleksey Kaikov finished in clear 2nd place with 4 points, but due to being unrated, he will only win the restricted prize of 20 dollars. Fortunately, it only takes 4 games to get a USCF provisional rating. (diagrams #6 and #7) 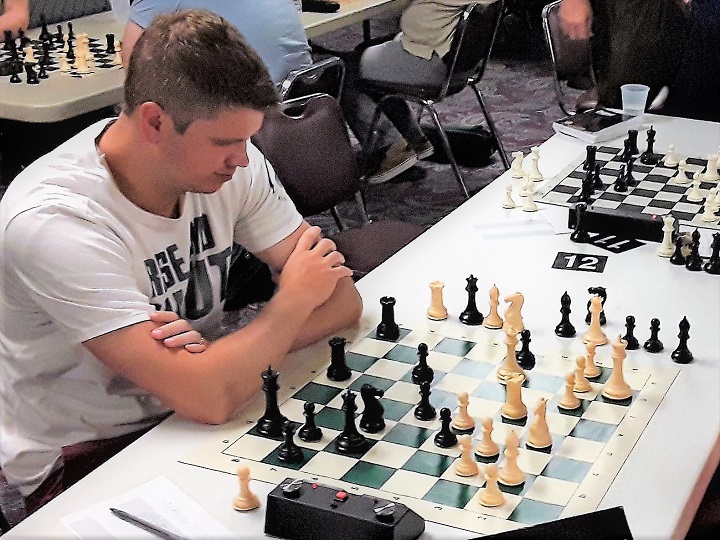 Jason McEwen at the board.

Steve Kaufman, Randolph Schine, and Aditya Krishna all ended up with 3.5 points, and they each win 30 dollars. Mr. Kaufman is getting his game back. It's always good to see a long time DCC member like Mr. Schine winning prize money. Aditya is one of several youngsters who play at the DCC regularly and we are glad to have them. They are the future of the club. 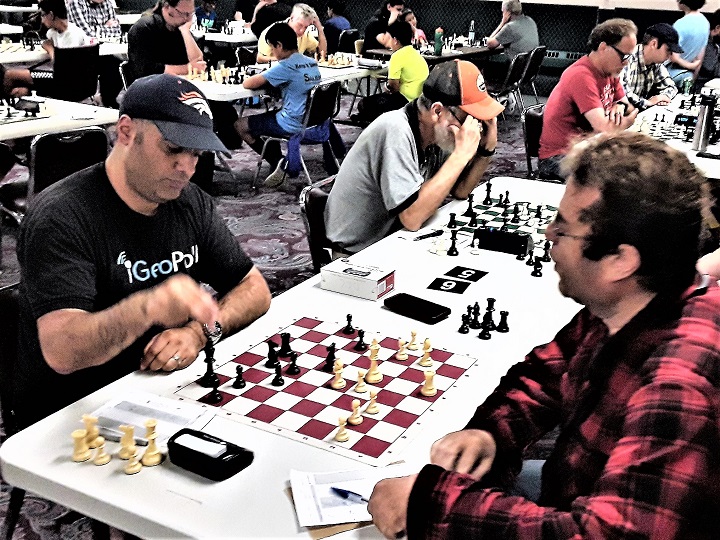 Aleksey Kaikov about to move in his game against Steve Kaufman.

Speaking of improving youngsters, Archer Murane might be leading the pack. He wins the 20 dollar U1900 Upset prize with an extraordinary combined rating difference of 1451 points against 3 opponents. A win in round 1 against Rithvik Ijju, and a win and a draw against the strong experienced players, Michael Crill and Rob Cernich. He only lost to the much higher rated, Andrew Starr and John Krue. 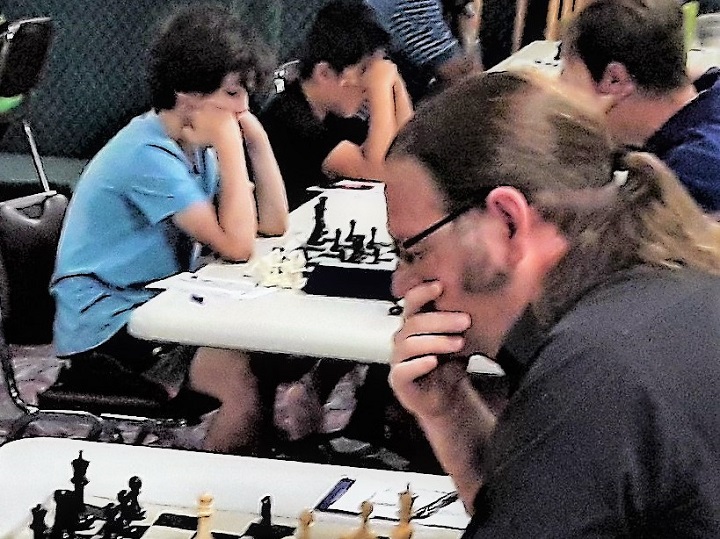 Archer Murane in the blue shirt. Phil Brown on the right.

The U1500 section was won by Edward Peters with a 4 point score. He had to hold a draw in the last round against another youngster, Owen Vonne, who is honing his game at the DCC. By doing so, Mr. Peters wins 108 dollars for clear 1st place. Owen took clear 2nd place and wins 66 dollars. His Dad says he is going to spend it all on ice cream. Just joking - maybe not ALL of it :-) 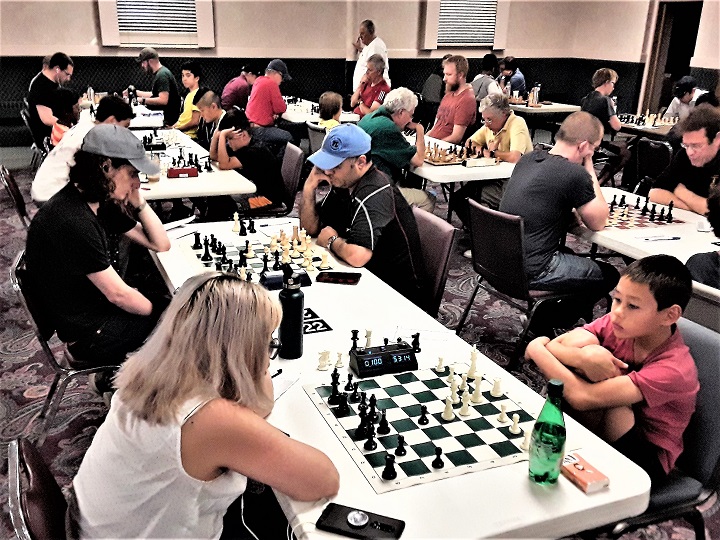 In the foreground, Alayne Wilinsky is playing Owen Vonne.

The DCC Secretary, Alayne Wilinsky, tied for 3rd place with Aditi Iyer and Derek Yin. They each win 15 dollars. Aditi is a young girl who along with her brother, Arjun, is playing often at the DCC. It is especially good to see young women like Alayne and Adita playing chess. That is what chess needs the most; more women playing. Derek is Davin Yin's younger brother. Chess playing families enjoying chess at the DCC. The 20 dollar U1500 Upset prize was won by Chad August who started off with two big upset wins, then lost his next three games. C'est la vie. Nobody wins all their games. Chess is hard. I do tend to state the obvious :-) 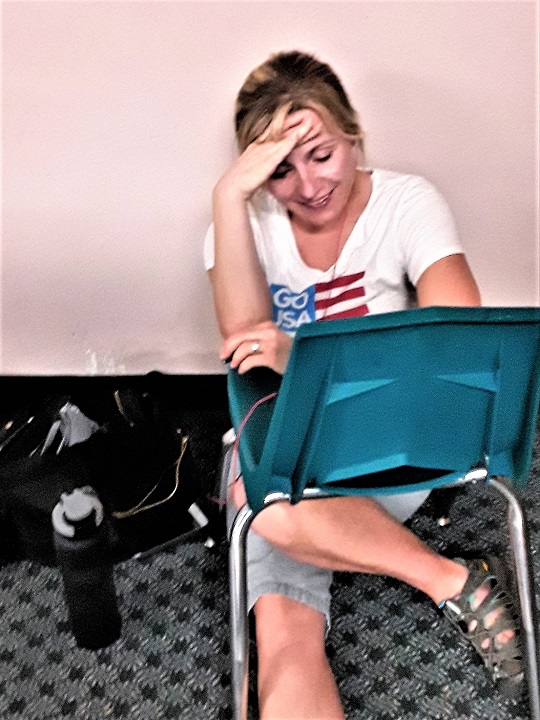 Chess parent, Kori McConnell, in her "office" at the DCC :-) Kori and her husband, Kevin, are the proud parents of Griffin and Sullivan.

Many thanks to the parents who spend time and money for their children to have the mind-expanding benefits and enjoyment that chess offers. In the modern world, it's great that kids like to play this ancient game.

Let's start off with the only game NM Brian Wall lost this month...

1) Neil Bhavikatti vs. Lemon Party Geriatric Floormaster Brian Wall. Round 2. Mr. Wall blocked an attack on the Black queen with 43...Bg7-d4. Find the move that Neil plays now to win material or checkmate.

2) Alaa-Addin Moussa vs, Super GM Brian Wall. Round 5. I think it's safe to say 34. Re1-e3 was not the best move. Play the move for Black that wins the Premier 1st place prize money for the Super GM.

4) Super GM Brian Wall vs. Richard Shtivelband. Round 4. Black to move and let's see; the Nc7 is attacked, the Bd7 is attacked, and mate on h7 is threatened. Meaning no offense to NM Shtivelband, it is good for us, Class players to see that even strong Masters can get into terrible positions like this :-)

5)  Richard Shtivelband vs, Kevin Seidler. Round 5.  Final Position. Black resigns. Wouldn't be fair to have the previous diagram and not have this one. NM Shtivelband says this was one of the best games he has ever played. This beautiful game will be the subject of a DCC lecture from 6:10 - 6:55 PM on the 3rd Tuesday of August. Don't miss what is sure to be a great insight into how a Chess Master thinks. Quoting NM Shtivelband: "I dare you to tell me that this isn't what chess should be all about."
6) Jason McEwen vs. Phil Brown. Round 2. Black has just captured a pawn with 31. Bg4-e6. What is the winning move that Mr. McEwen plays now?
7) Jason McEwen vs. George Peschke. Round 4. In this position, Mr. Peschke played 14... Ne7-c6. Mr. McEwen correctly points out the Knight needed to go to d5. Why?  As always, Mr. McEwen's notes to his games are instructive.
8) Rattlesnake Coleman Hoyt vs. Michael Crill. Round 4. How does the Rattlesnake strike to take advantage of Black's last move 11... Nc6-e5?  Mr. Hoyt also writes instructive, as well as often entertaining, notes to his games.
9) Bill O'Neil vs. Cobra Coleman Hoyt. Round 5. I'm glad Mr. O'Neil played 10. Nd2-e4 because it makes a really pretty
center position, and an interesting game ensues. Out of curiosity, I put the position into the 365Chess.com Big Database and "no games found with this position". Then I tried the ChessTempo.com All Games database and "no records found". Millions and millions of recorded games and in only 10 moves, Bill and Coleman have created a unique position.

10) Andrew Eskenazi vs. J. C. MacNeil. Rd 4. Black to move and force a winning pawn ending. In the score of the game, Mr. Eskenazi resigned after 48... e2+.  I added an extra move just because i was ready to play 49... e5 and not blunder into a stalemate :-) See also Mr. Eskenazi's annotations to this game.