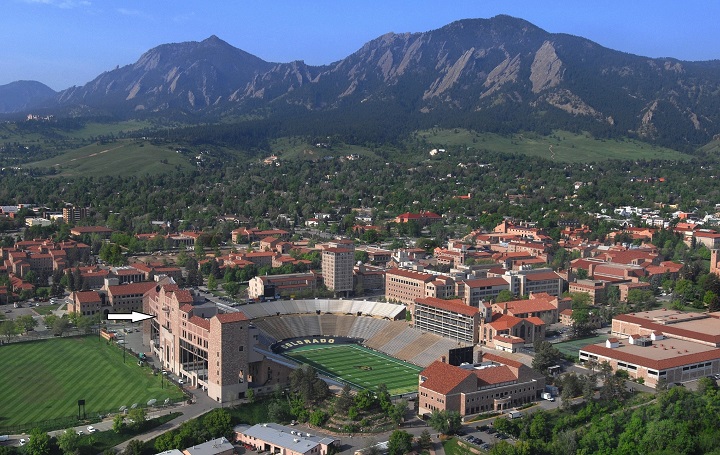 Also includes a summary of the Denver - Boulder Team match.

The 2019 Boulder Open was a fairly well-attended tournament but a little weird at the same time. 52 players registered to play but 2 dropped out before the tournament started. Then several players took byes or were no shows for round 1. Consequently, only 21 games were played. Round 2 was slightly better with 23 games. Then the usual big drop off for round 3, with only 18 games. Round 4 saw 21 games and surprisingly only 19 games were played in the last round. So instead of a good 50 player tournament, we had a not bad 40 player per round average tournament. 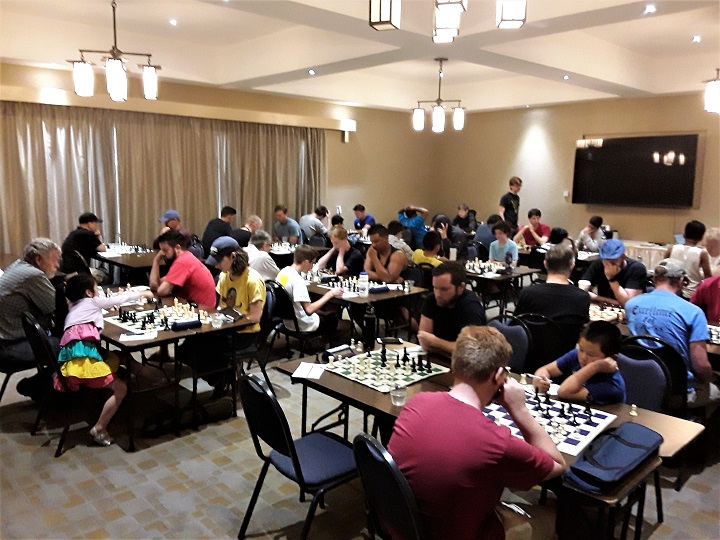 The tournament is up and running.

Back in the day, I seem to remember weekend tournaments were 4 rounds - 2 games a day - with usually 40 moves in 2 hours and then 20 in 1 till the game was finished or adjourned. That kind of time control has fallen completely out of favor and was mostly replaced by the perfectly reasonable G/90 with no delay or increment. 6 hours or less for 2 games and go home to come back the next day and play 2 more.

Now with digital clocks, a delay or increment is always added, and G/90 with added time can easily last 4 hours or more. And forget about running your opponent out of time when you have a lost position :-) In my mind that is the sole benefit of the increment or delay. It allows you to win a won game, and not suffer the indignity of a gloating opponent - who should have resigned - claiming the point with a time win. 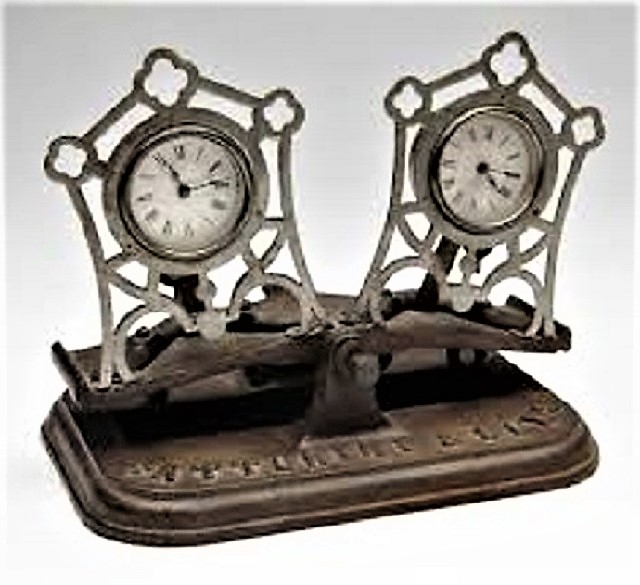 So added time is a good thing, but in my opinion, 3 serious USCF rated games in one day, is not at all good. The thought is 5 rounds make it more likely there will be a clear 1st place winner. That's debatable. In this 5 round tournament, there was a 4-way tie for 1st place in the Open section, and a 3-way tie in the U1800 section. Funny is if this had been a 4 round tournament there would have been a clear winner in the Open and only a 2-way tie in the U1800 section.

A statistical fluke perhaps, and it would be interesting to research, but that is not something that I have the time, inclination, or ability to do. Can we at least try a 4 round weekend and see if we have more players playing all their games? And not having a strong young player like Davin Yin somehow getting a forced bye for the last round. 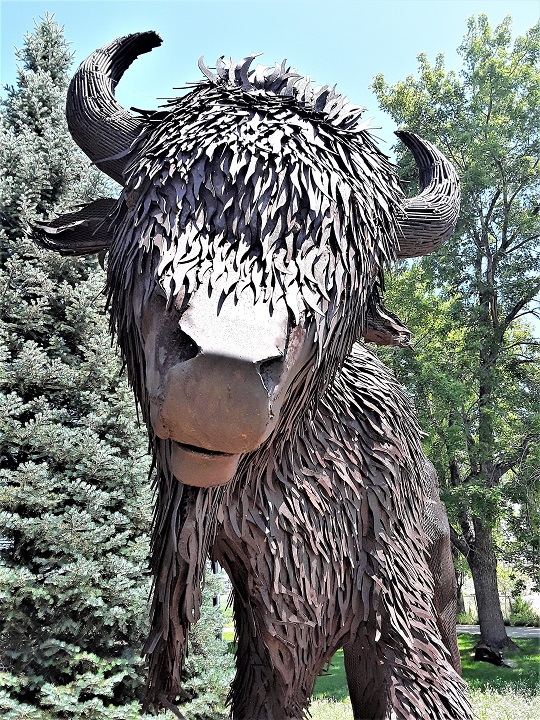 So you're a chess player. huh? Well, I'm Ralphie the buffalo.

That's enough grumbling. On to who won a share of the sure not bad 1115 dollar prize fund. In the Open section - with no Richard Shtivelband, Gunnar Andersen, or Josh Bloomer - it looked like everyone would be playing for 2nd to Brian Wall, who is not at all pleased with his game as of late. Saying in his own words, "I don't know what is going on but I am constantly missing super simple stuff lately." Incredibly NM Wall finished out of the money with a 3 point score that includes a 1st round forfeit win point. 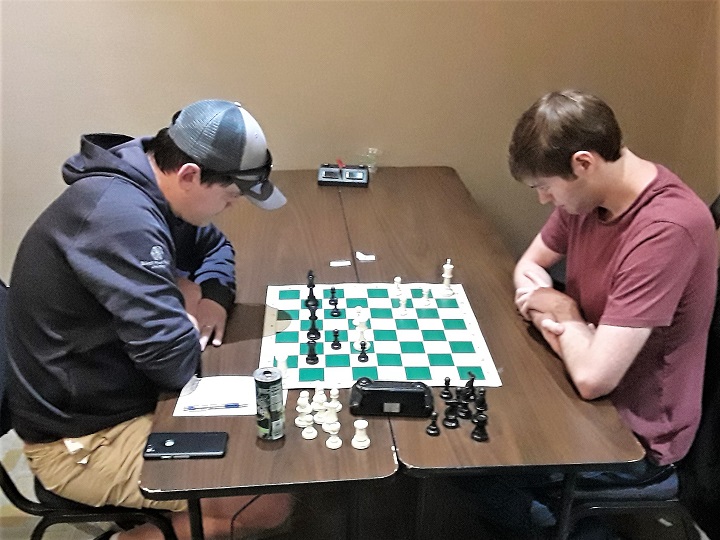 Mirza Peljto with the Black pieces against Rhett Langseth in round 2.

Rhett Langseth, Neil Bhavikatti, Jeremy Berman, and Yuval Laor all finished with 4 points and share the combined 1st, 2nd, and 3rd place prize money of 605 dollars. Rhett probably had the most difficult games. According to several players, he was dead lost in each of his first 4 games, yet somehow hung tough and won them all. Losing only to Neil in the last round. After the young Bhavikatti had held Brian Wall to a draw in round 4. (see diagrams and game links below) 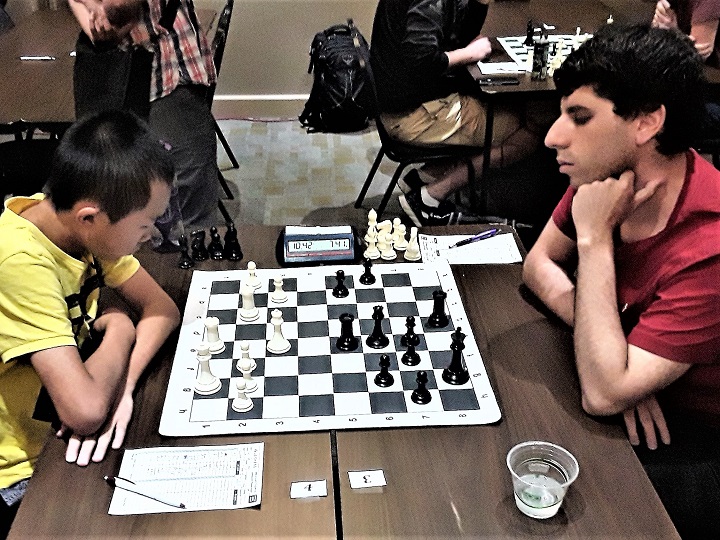 Mr. Berman is from New York attending CU. He upset Brian Wall in round 3 and only lost to Rhett. He was also responsible for organizing the DCC vs. Boulder team match. (see a summary of that match below) It was good to see Yuval Laor again after many years. Apparently, he can still play a little :-) He only lost to Rhett in round 3. Mirza Peljto played very well to win the 65 dollar U2000 prize. He finished with 3.5 points, that includes a last round upset win against Edward Yasutake, who I know is not easy to beat. 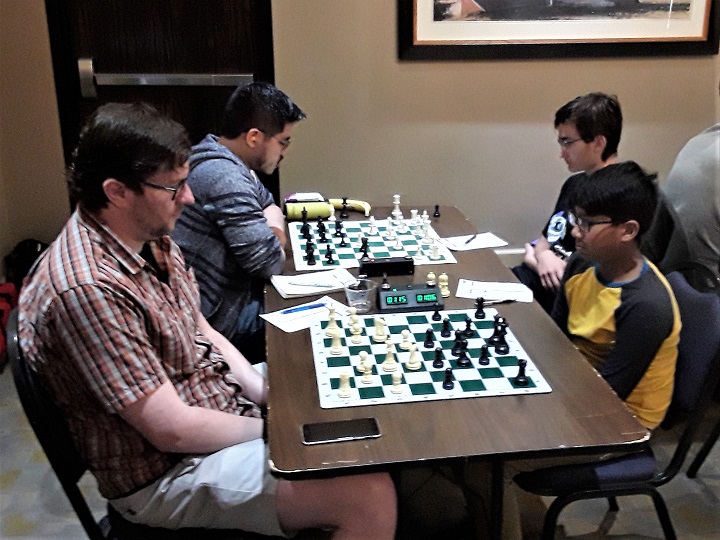 Yuval Laor has the White pieces against Harsh Mali. In the background Ed Yasutake is playing Black against Aiden Sirotkine.

In the U1800 section, there was a 3-way tie for the combined 1st, 2nd, and 3rd place prize money. Cael Burke-Kaiser, Robert Carlson, and Casey Breen all ended up with 4 point scores and they each win 133 dollars and 33 cents. I don't know Mr. Burke-Kaiser or Mr. Breen but congratulations to them both. I do know Mr. Carlson, and let me say - from over the board experience - that he is way better than his 1512 rating. Three of his 4 points were from upset wins and draws. Mr. Breen took 1st place away from Coleman Hoyt with a last round win. Mr. Hoyt had big upset wins in rounds 2 and 4 and with another one in round 5 he would have taken clear 1st place. Alas, he only wins the 45 dollar U1600 prize. 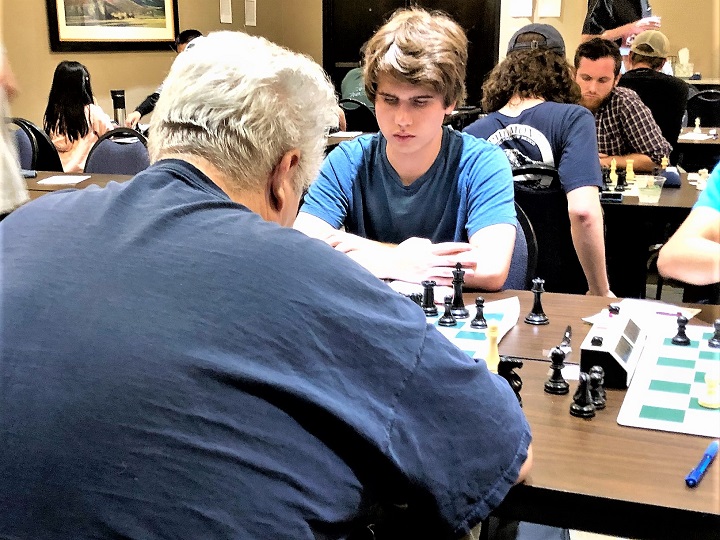 Brian Wall, taking up most of the picture :-) is playing Ryan Schmidt. In the background Casey Breen is facing the camera and playing Coleman Hoyt.

As the highest-rated player in this section, I had high hopes. Those hopes were dashed by the young Ayush Vispute in the very first round. The kid played out of an iffy early middle-game position, then proceeded to completely outplay me down the stretch. To top it off, Ayush set up a sweet checkmate trap that I stepped right into. Adding insult to injury, I was lucky to draw against George Peschke in round 4. Mr. Peschke is making a habit of taking my rating points :-) 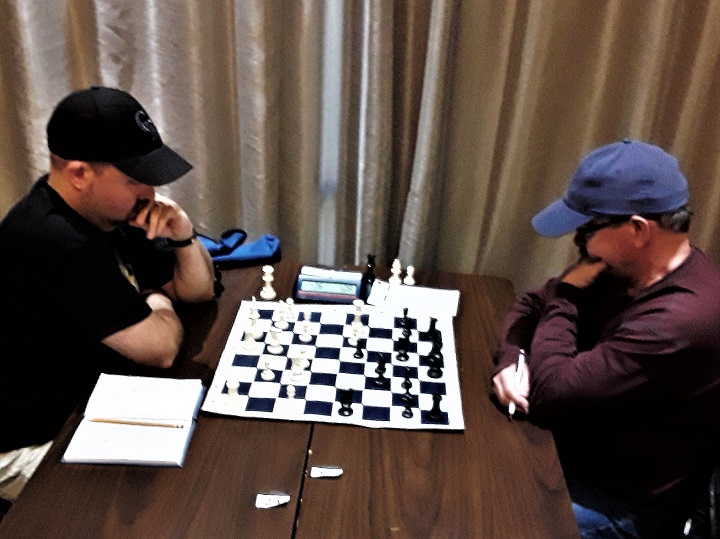 George Peschke, in the blue hat is playing Joseph Finder.

Many thanks to Tournament Director, Andrew Starr, who organized and ran the tournament efficiently, despite all the dropouts, byes and no shows. 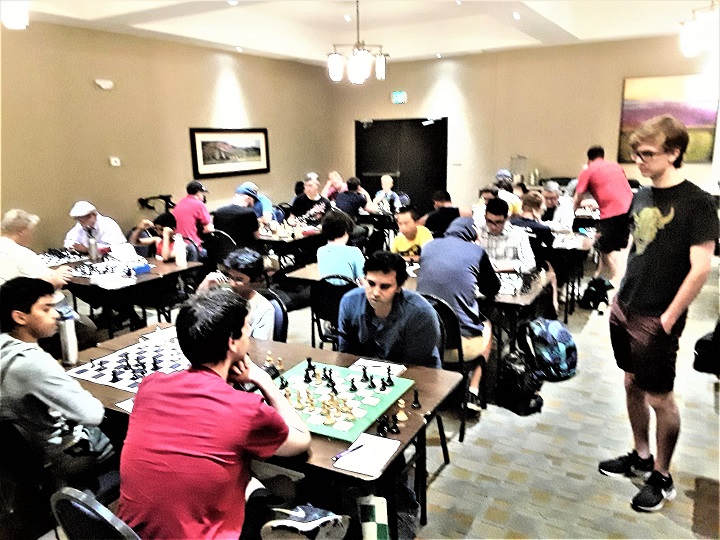 Jeremy Breman - with the Boulder Chess Club - had the great idea to organize a team match against the Denver Chess Club. Brian Wall was immediately in favor of the concept. I think we should take this a step further and have regularly scheduled team matches with teams from the Greeley - Ft.Collins, Boulder, Denver, and Colorado Springs clubs. I like this idea as it promotes and encourages friendly competition and camaraderie between Colorado chess clubs. Maybe we could play after the last round of any weekend tournament, where the players would likely already be in attendance. 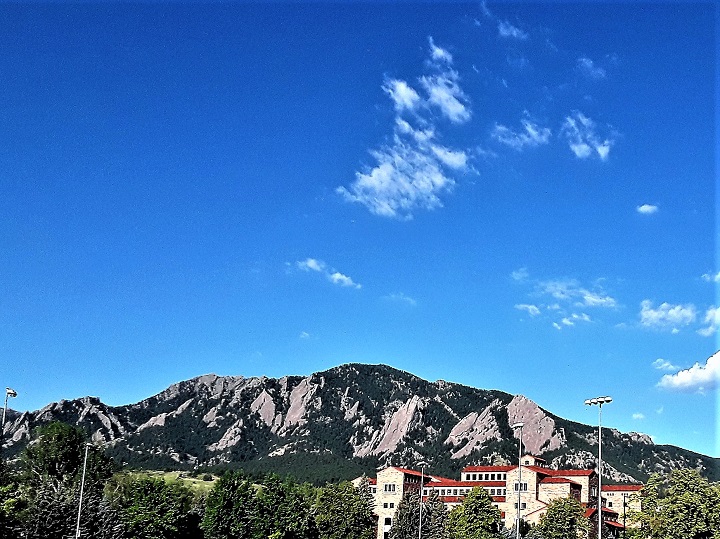 The Flatirons background of the beautiful CU campus where the match was played.

Let's first say a little better organization from both sides would have made for a better tournament. Essentially it came down to whoever showed up would make up the teams. One Denver player had signed up to play and apparently didn't know or find out where and when the match would take place and was thus a no show. I think a couple of expected Boulder players also did not show up. A few Denver players were late due to not knowing where the site was on the large spread out CU campus. Tournament director Andrew Starr was not happy to have to repair several times due to the no shows and late arrivals. 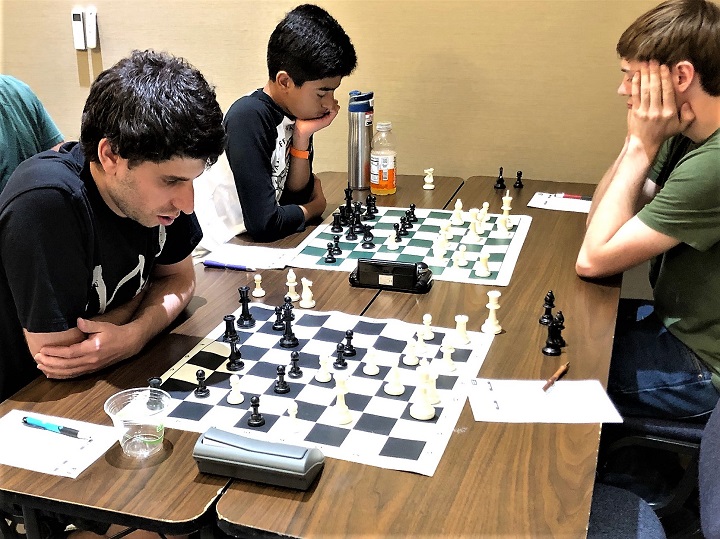 I failed to get any pictures from the Team match. Here Mr. Breman is playing Black in the last round of the Boulder Open. The other board is Neil Bhavikatti against Rhett langseth.

Then there was an issue with the Time Control. All of Brian Wall's back and forth emails said G/70; d5. That was changed at the site to G/75; d5 then G/'80; d5. When it was realized that - due to the late start - the match would likely run past the 10:00 PM building closing time, changed back to G/70; d5. Not all the players got the message. Brian played his game against Jack Woehr at G/65; d5. I think other games were played at G/75; d5. If not for Mr. Woehr bringing his own scoresheets we would have been keeping score on scrap paper.

One last quibble. With the playing room open to non-chess playing people, a television was on throughout the match. Not all that loud but clearly audible. Apparently, it could not be turned off or the volume reduced. As we all know, rated tournament chess is ideally played in a whisper-quiet room. 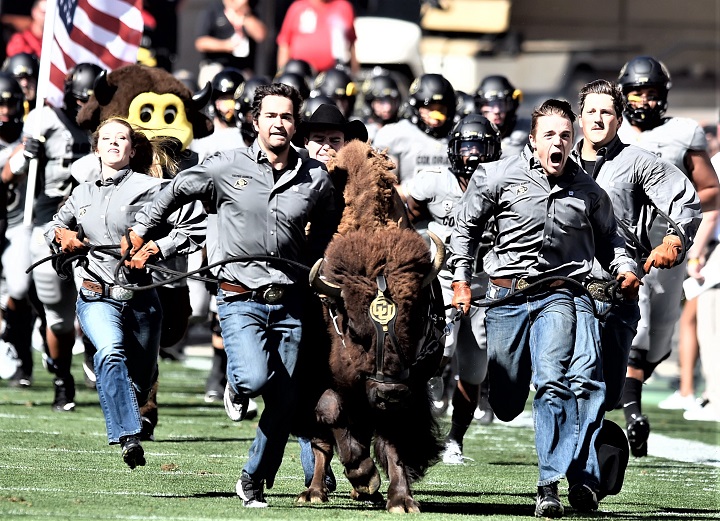 The Boulder team brought in Ralphie the Buffalo to get them fired up for the match :-)

12 players showed up from the DCC and 9 from the Boulder club. So right there was an unfortunate "odd man out" situation. To make 10 player teams, Brian Wall switched sides and played the 2nd board on the Boulder team. 2nd board to avoid being paired against the DCC 1st board, Richard Shtivelband, as they had previously decided if the need arose.

In my game with David Bowers; Brian Wall says, "JC MacNeil passed on 100 wins with an extra piece." Actually, it was just an exchange, and I probably only missed 30 or so winning moves :-) I played out of a Smith-Morra gambit with the Black pieces, then had a nice tactical middlegame. Ahead on the clock by more than 15 minutes down the stretch, I allowed it all to slip away and lost. To his credit, Mr. Bowers just kept finding moves to stay in the game. An upset win in this game would have made the match score 5 - 5. C'est la vie. 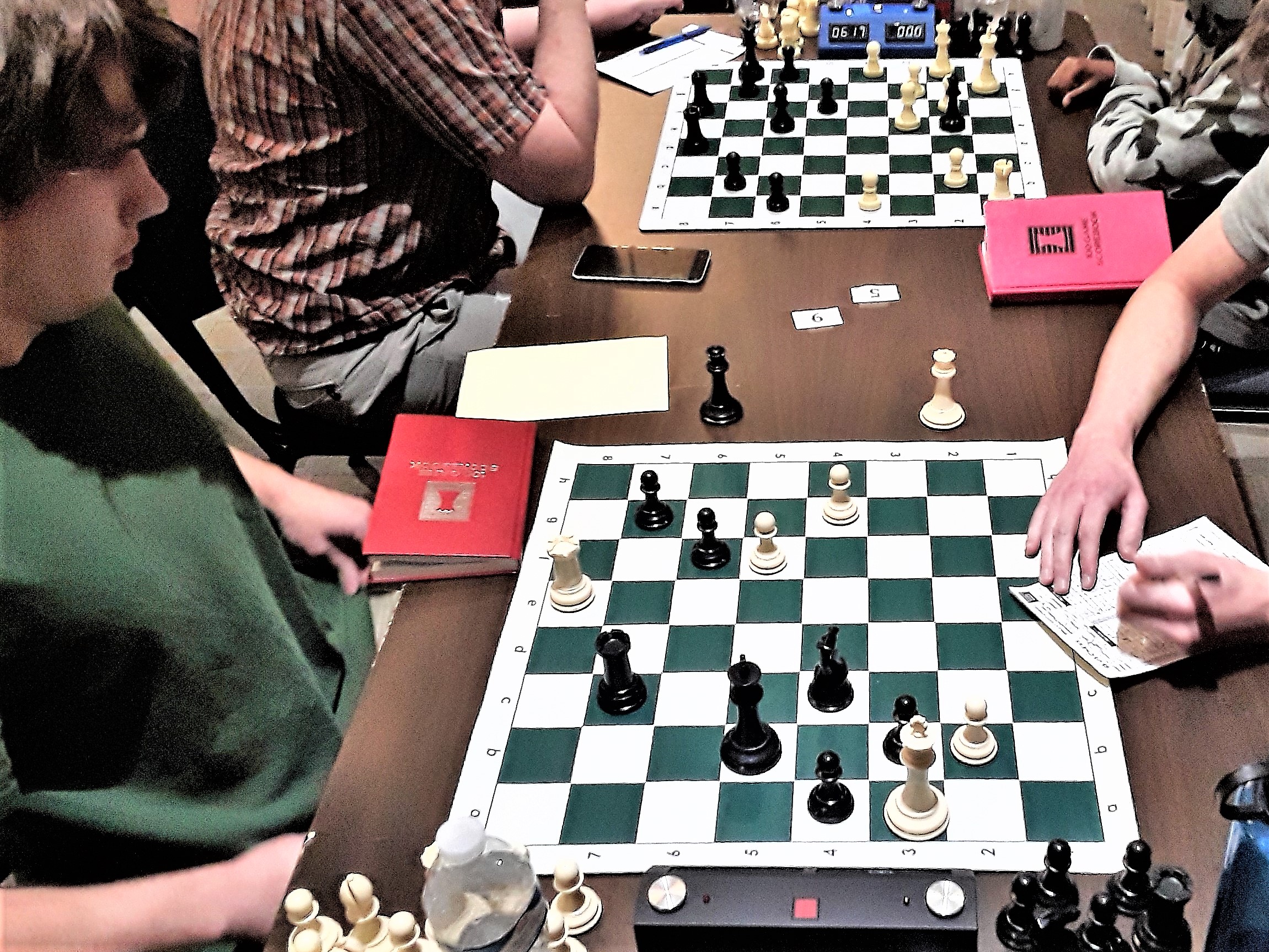 A pretty checkmate played on the board by Ryan Schmidt with the Black pieces.

1) Rhett Langseth vs. Neil Bhavikatti. Round 5. White has just payed 19. Qe2-h5. How does Black win a piece. This was the only game Rhett lost at the 2019 Boulder Open.

2) Brian Wall vs. Jeremy Breman. Round 3. Position after 20. dxe5. Find a winning move. and with computer notes.

3) Edward Yasutake vs. Brian Wall. Round 2. It is Black to move in this position. How does NM Wall go about winning an exchange? and with computer notes.

5) Rithvik Ijju vs. Harsh Mali. Round 5. Black to move and win an exchange Brian Wall admitted it took him a while to solve this position, See his answer below after the last diagram.

8) Mark Brown vs. Davin Yin. Round 3. In an always hard to win opposite color Bishop ending, observe young Davin's technique to earn the point. Notes and annotations are by Andrew Starr.

9) J.C. MacNeil vs. Aysuh Vispute. Round 1. White has just played 23. Rd1-f1 threatening to play 24. Rff7 next. How does the young Aysuh defend against the threat?

11) Neil Bhavikatti vs. Curtis Chun. Round 2. What is the best move for White in this position? Burn your chess card if you don't see it :-)