"The global reach of chess never ceases to amaze me."

I think it's great that we have a local Colorado player bringing us international chess superstar tournament reports. Not to mention the great photography. This time John Brezina attended the opening rounds of a FIDE Grand Chess Tour tournament held in Zagreb, Croatia. Located east of Italy across the Adriatic Sea. And, yes, I had to look that up :-) I am pleased to have the privilege of selecting and adding captions to Mr. Brezina's photographs from the picturesque city of Zagreb. The heading photo is a museum quality chess set that was featured prominently at this tournament. 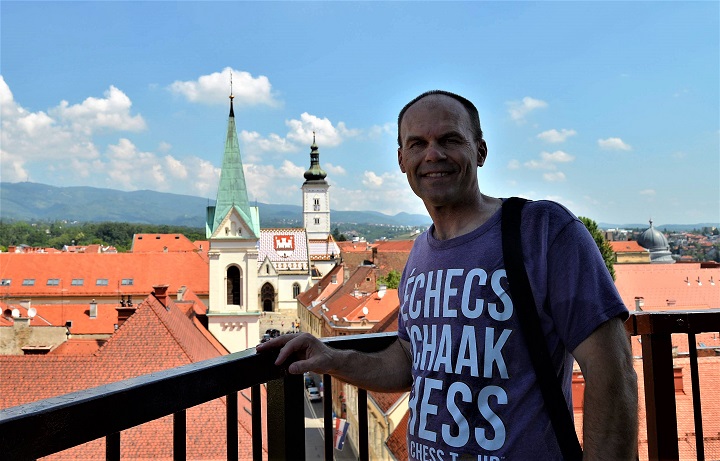 Quoting John Brezina: "The global reach of chess never ceases to amaze me. One of the new locations to the 2019 Grand Chess Tour included the beautiful city of Zagreb, Croatia." 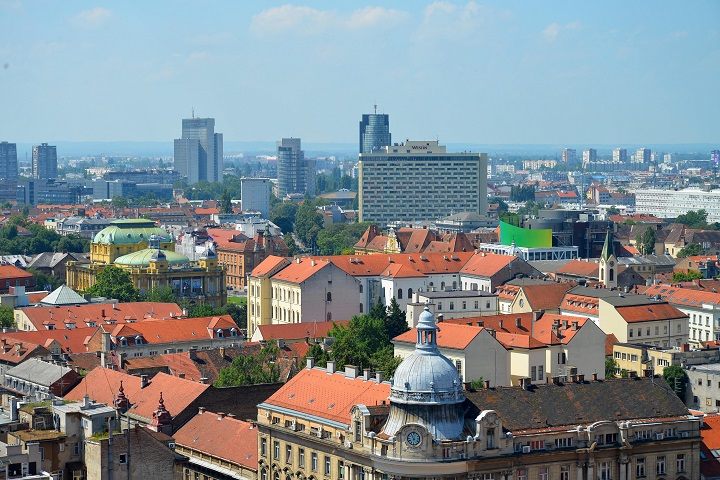 The picturesque city of Zagreb. The capital of Croatia.

"While the tournament has concluded and most of you may know the results, I'll add my perspective as a fan and share my attached photos. Chess is flourishing in Croatia for many reasons but most notably former World Champion Garry Kasparov. Mr. Kasparov was granted Croatian citizenship nearly five years ago and was a keynote speaker at the opening ceremony." 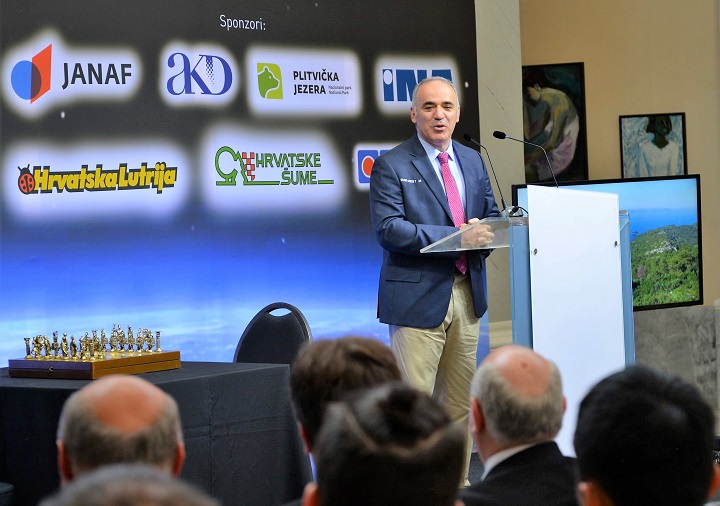 GM Garry Kasparov speaking at the the opening ceremony...

"He also made the ceremonial first move on the current World Champion's board at the start of round one. The opening ceremony was held at the beautiful Mimara Museum in the heart of Zagreb while the tournament was played in the Novinarski Dom. Both were held across the street from the Westin Hotel where the players stayed." 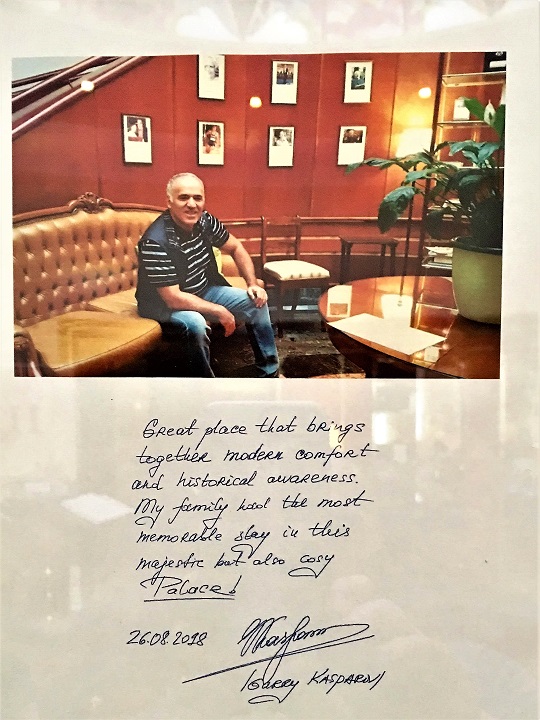 ...and here he is relaxing at the Palace Hotel...

"And a short distance away was the Palace Hotel which turns out has an interesting tie to chess. I actually booked my stay at the Palace not knowing the list of former high profile guests. After checking in and browsing through the beautiful lobby, a picture on the wall caught my attention. A young Bobby Fischer during his prime in May of 1970 stayed at the Palace Hotel during the "Tournament of Peace". A kind handwritten letter from Bobby to the hotel staff thanking them for his stay was attached." 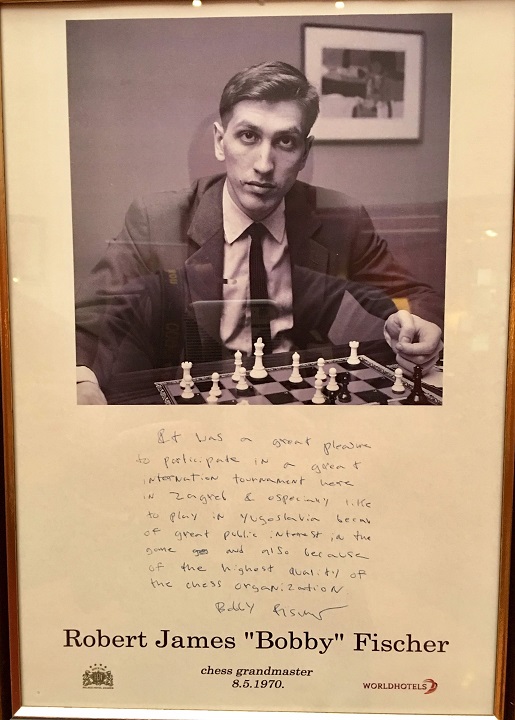 ... where a rather famous player has also stayed.

"It is well worth looking up the Rovinj/Zagreb 1970 tournament that Bobby won by a full two points over the likes of Hort, Gligoric, Smyslov, Korchnoi, Petrosian and Walter Browne. And if Fischer staying there was not enough, how about Garry Kasparov too! His picture was there with a note as well and it turns out he was there during my stay as well." 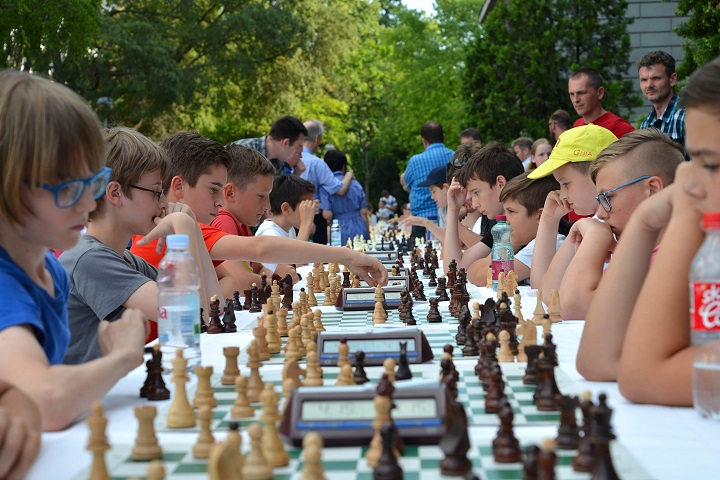 A local kids tournament going on outside the Mimara Museum.

"The opening ceremony was held on June 25, 2019, at the Mimara Museum. Outside a chess tournament was held during the afternoon for local kids which was well attended. Afterward, all kids were given gift bags from local sponsors but more importantly a group photo with all twelve elite GCT players." 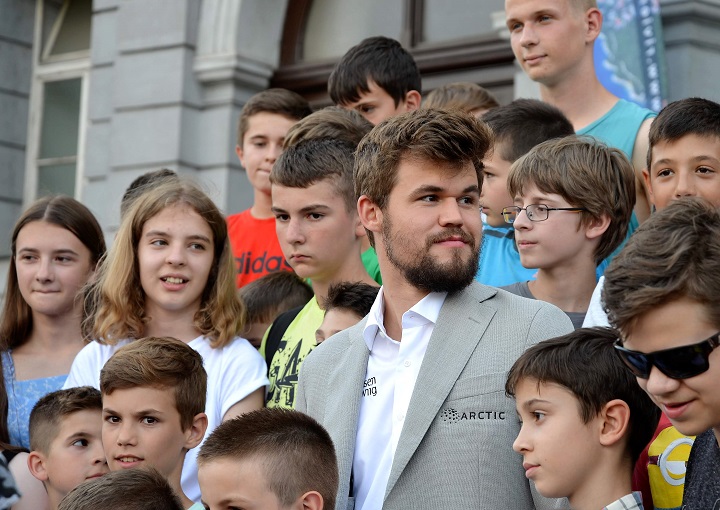 "Magnus Carlsen kindly stayed a bit longer for another group photo with all the kids. There was a short opportunity for kids and adults alike to meet their favorite players and take photos or get autographs. The ceremony inside would be by invitation only and included local officials and sponsors that gave short speeches along with Garry Kasparov." "Media from around the world were covering the event including the great staff from the St. Louis Chess Club. Maurice Ashley and crew provided great commentary and interviews live from Zagreb while Yasser Seirawan, IM Jovanka Houska and GM Ramirez commentated in the St. Louis studio. After the drawing of lots the players were entertained by local singers in traditional dress. Kids continued to play chess outside even after the ceremony ended and the players had departed." 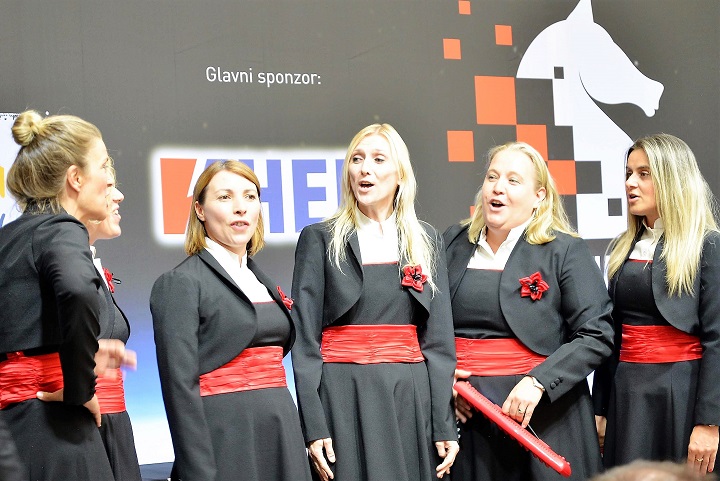 The Croatian singing group in traditional dress at the opening ceremony... 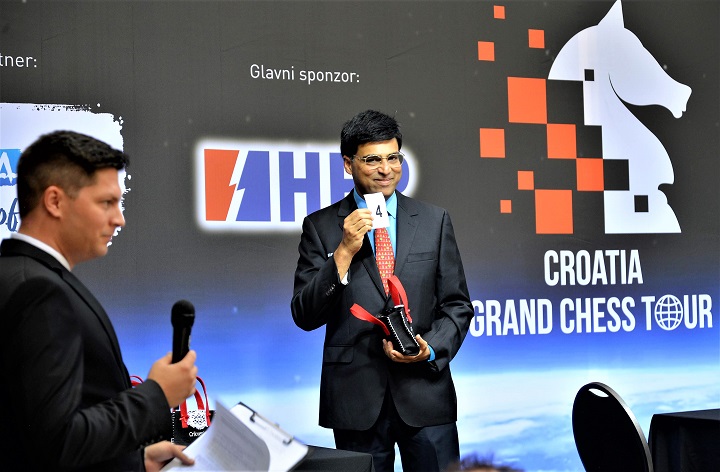 ... where GM Viswanathan Anand seems to be pleased to draw pairing #4.

"The next day the tournament commenced upstairs in the historical Novinarski Dom building. Built in 1929, it is home to the Croatian Journalists' Association. Rounds did not start until 16:30 which was great for all day sightseeing and all night chess." 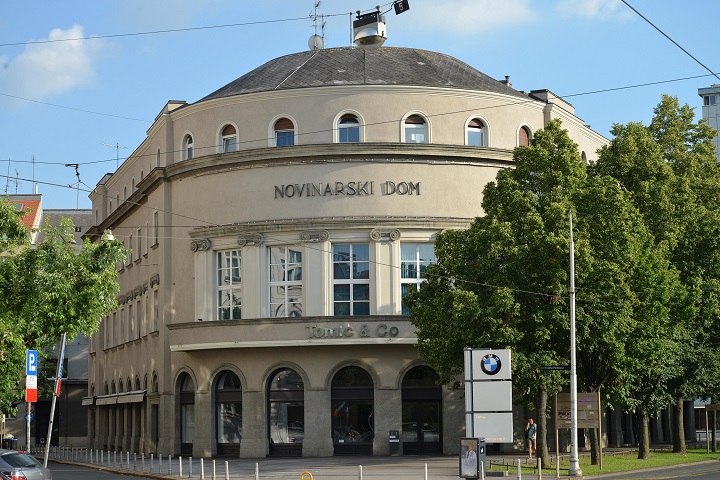 "Many great sights throughout the city included the Cathedral of Zagreb, St. Mark's Church, old Upper Town, the National Theater, and Mirogoj Cemetery." 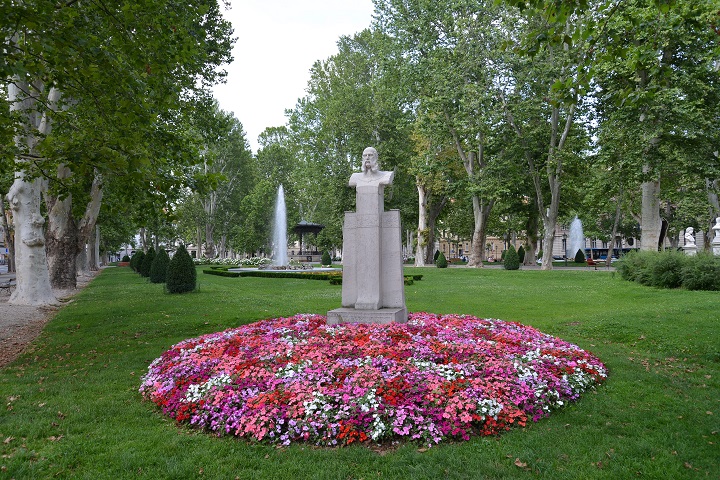 A city park in downtown Zagreb. 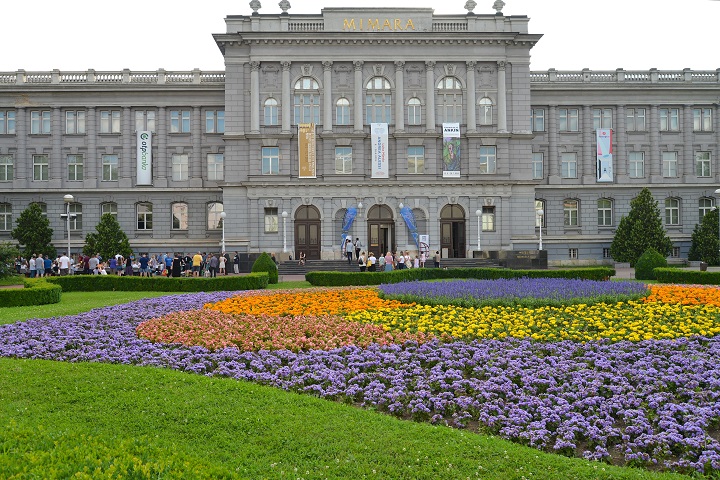 The Mimara Museum must be awesome... ...as must be the Cathedral of Zagreb.

"I was fortunate enough to attend the opening ceremony and rounds one and two. The Croatia GCT leg is one of only two classical chess formats this year, the other being the Sinquefield Cup. The other five legs all being Rapid & Blitz. Tickets for each of the rounds capped the audience to nearly 100 and sold out daily I believe." 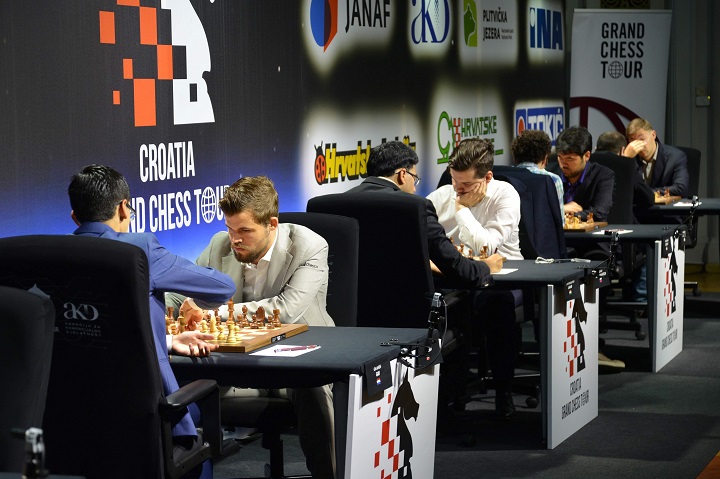 "Fans slowly trickled in to fill the seating area a short distance from the boards. Unless you were a VIP in the first row, screens above the playing area allowed you to more easily follow the games. As usual, the main focus of media attention is where the World Champion plays. Garry Kasparov made the ceremonial first move on Magnus Carlsen and Anish Giri's board." 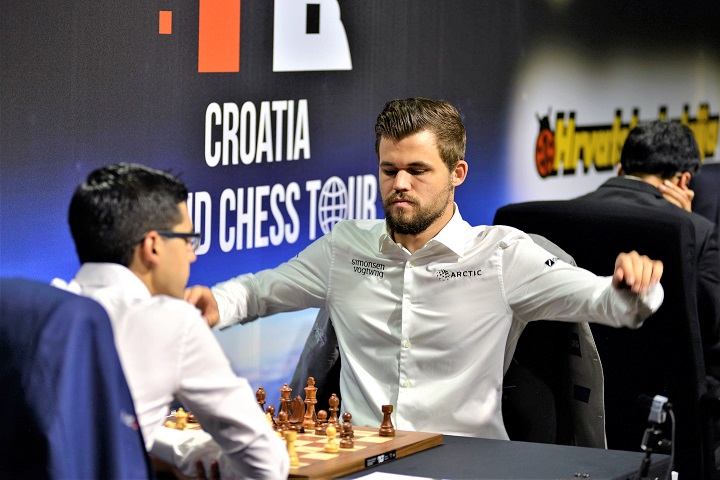 "Another board of interest was the American match-up of Fabiano Caruana & Hikaru Nakamura. Round one would be as hot as the weather outside. Four out of six games would end decisively including the 23 move masterpiece by Magnus". 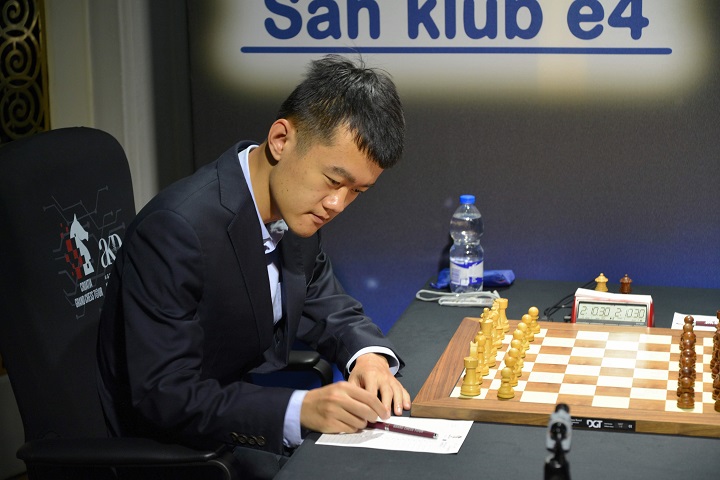 "Also winning in round one was recent World Championship challenger Fabiano Caruana and Wesley So who defeated Chinese number one Ding Liren. And recent Moscow Grand Prix winner Ian Nepomniachtchi would defeat former World Champion Vishy Anand with the black pieces. GM Nepo would lead the first half of the tournament and later cool off to finish tied for fourth place" 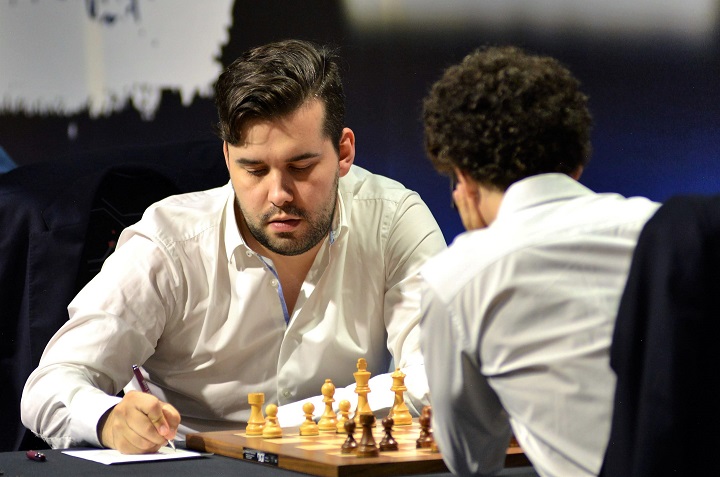 "Round two would cool off literally in the playing hall as mobile air conditioning units were brought in to combat very warm and humid weather. Play would cool as well. GM Nepomniachtchi's win over GM Caruana would be the only decisive result." Astrid Vestro, about to make the 1st move for GM Carlsen.

"The start of the round would begin with a special guest, Norwegian Ambassador to Croatia, Astrid Vestro, who made the ceremonial first move. She appeared quite smitten with Magnus after making the move, even sneaking a quick peck on the bearded cheek of the World Champion. Her interview with Maurice Ashley is worth watching as well as all their great coverage through the www.grandchesstour.org website."

"While five games ended in draws they were far from boring. Especially the miraculous save from Vishy Anand who played world number one Magnus Carlsen. It is always a treat to watch these two World Champions battle it out over the board". It's always a battle when these World Champions sit down at the board.

"After three short days in Zagreb, I took a very early morning flight back home where I continued to follow the match. Magnus Carlsen went on to take clear first by a full point followed by American Wesley So in clear second." 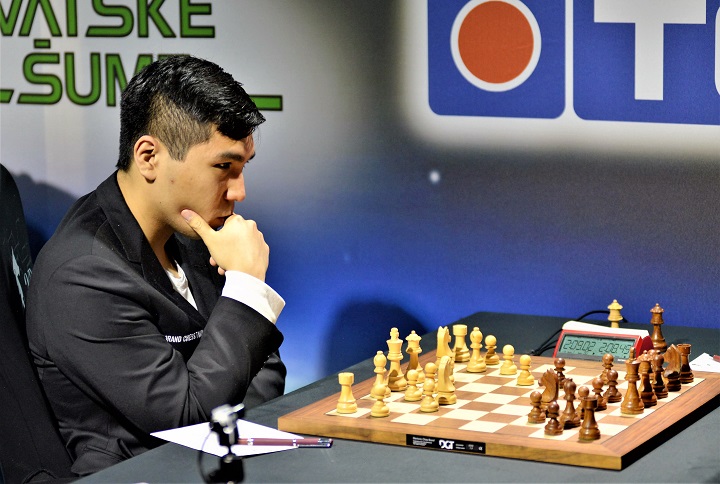 "Magnus would push his live rating to 2881, nearing his all-time high and separating himself further from world number two Caruana at 2817. Magnus is clearly playing prime chess this year and it will be interesting to follow the path of potential candidates for next years challenge to his title. Next up for the Grand Chess Tour is Paris without Magnus but he appears in St. Louis for the August Rapid & Blitz and Sinquefield Cup". Both players looking at the monitor rather than the board.

"Truly an epic time for chess fans with all the great internet live coverage of these events. I cannot thank the organizers enough for their kindness and generosity as well as the hard work they do to put these tournaments together. The players are always cordial and friendly to meet as well and are great ambassadors of the game. The city of Zagreb and people were all so welcoming and nice." 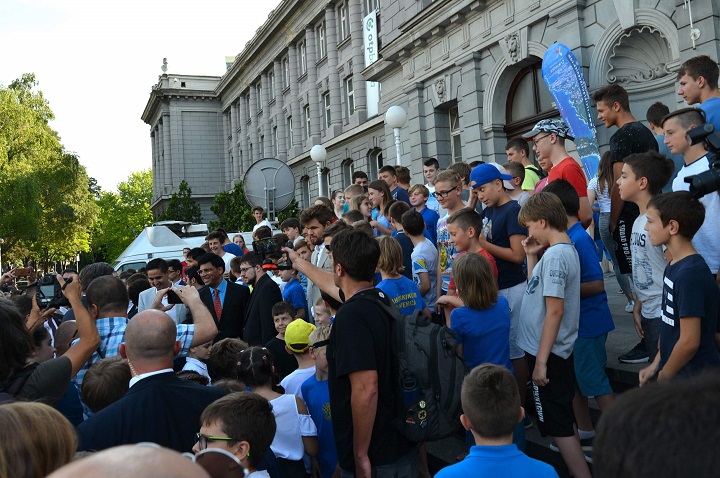 "Until next time, keep supporting our local clubs and tournaments here in Colorado and try to help those taking up the royal game. I appreciate any feedback and love to share my chess stories and travels if you see me around, especially at my Parker Chess Club."

"Lastly, thanks to JC MacNeil, who helps put these reports together, the Colorado State Chess Association, and the Denver Chess Club. Keep calm and play on! - John Brezina, Parker Chess Club."

Speaking of the Parker Chess Club, Mr. Brezina has this to say: "My club last night was bursting with over 30 players, mostly kids. We keep getting new kids and there is much excitement for my next tournament coming up. A young girl new to my club was at one of Lior Lapid's camps and has a great passion for the game."