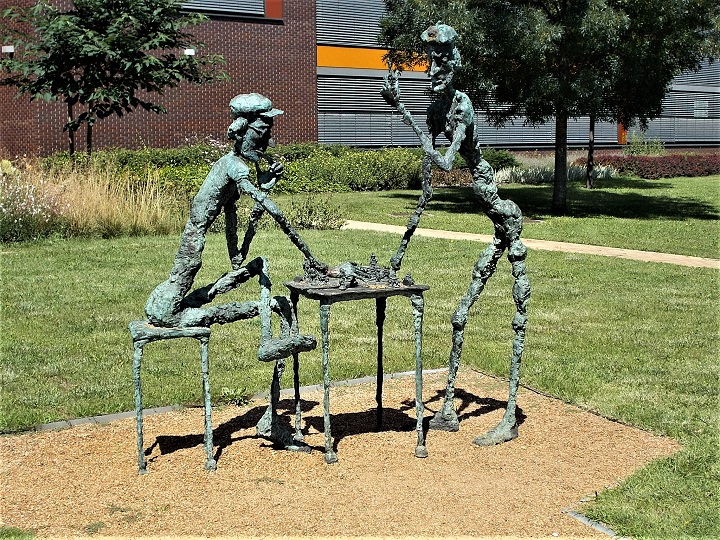 It is said that chess is not a sport because physical exertion is not required. Well then, why is playing tournament poker considered a sport?

In a recent Chess.com interview, GM Anish Giri makes a case for why chess should be considered a sport. Saying, "...the chess I’m playing right now is absolutely a sport, and I consider myself and my opponent's athletes." Then speaking about the "fierce competition" in Russian chess schools, "... the mentality of their athletes is a little bit different to those from western countries." Again using the word athletes. I was impressed when he went on to say, "...But in a way, chess is of course more than that. It has a special role in different cultures and in society. So in that sense, to describe chess as just a sport is unfair to the game." 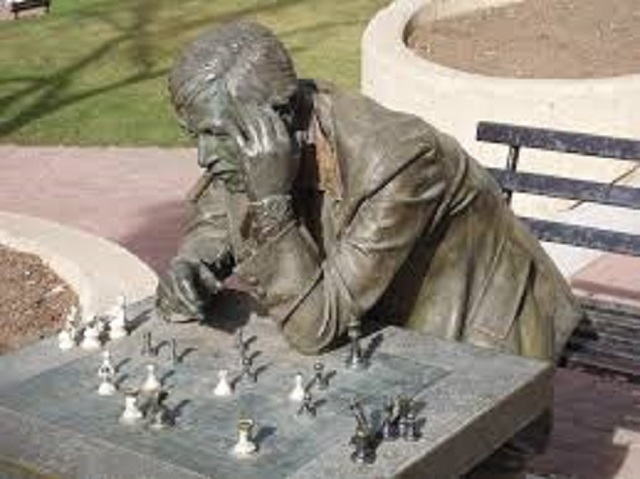 Chess inspired art and sculpture is found all over the world.

The pre-fight staredown between boxers in the ring is all about intimidation. Getting a psychological edge. And here GM Giri is saying the same thing about chess at the top level. "At the top, it’s extremely psychological. In order to perform at your best, you have to feel at your best, and anything can bring you out of balance... everybody is constantly trying to get some edge." Then saying, "Confidence is a very sensitive thing."

I also found it enlightening what GM Giri had to say about GM Anand. "... the fact he’s accomplished what he has and remained there for so long is because he’s able to reinvent himself, and change the way he works, the way he approaches things, just like a younger person does." Read the entire interview for an interesting insight into the mind of the #4 player in the world. The last bit reminded me of what I've heard Brian Wall say, "I always want to learn new things." Whereas I have often said, "I'm an old dog and that's a new trick." :-)

One last thought before getting to who won what in this month's DCC tournament. It is said that chess is not a sport because physical exertion is not required. Well then, why is playing tournament poker considered a sport? Admittedly there is some debate about that, but poker tournaments are broadcast as sport on ESPN.  Anyone who plays either game seriously knows that the mental stress involved is physically demanding. Sacrifice a piece, or play safe. Hold 'em, or fold 'em. 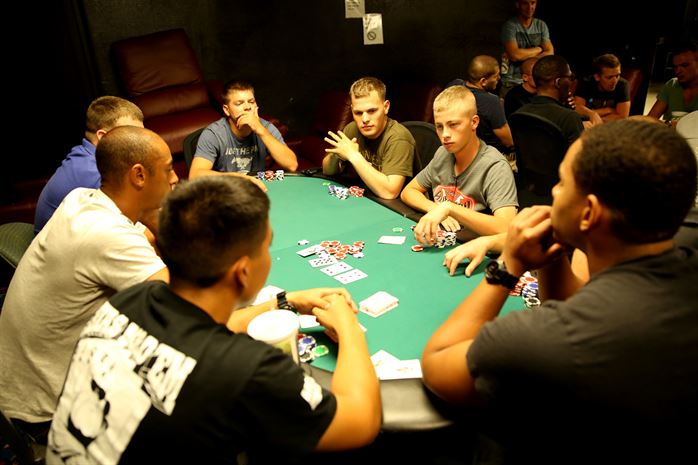 Like chess, this game is not physically strenuous but it is sure a sport. Photo by Modina Alala-Lo

With both Gunnar Andersen and Brian Wall unable to play all 4 rounds, Richard Shtivelband once again took clear 1st place with a 4-0 score in the Premier section. He won against Haroun Mueller-Omar in round 1. Took out the strong Experts, Kevin Seidler and Eamon Montgomery, in rounds 2 and 3, and did not allow Michel Doyon to score another big upset in the last round, (See diagrams #1 thru #3 below) Mr. Shtivelband's fine play won 107 dollars. 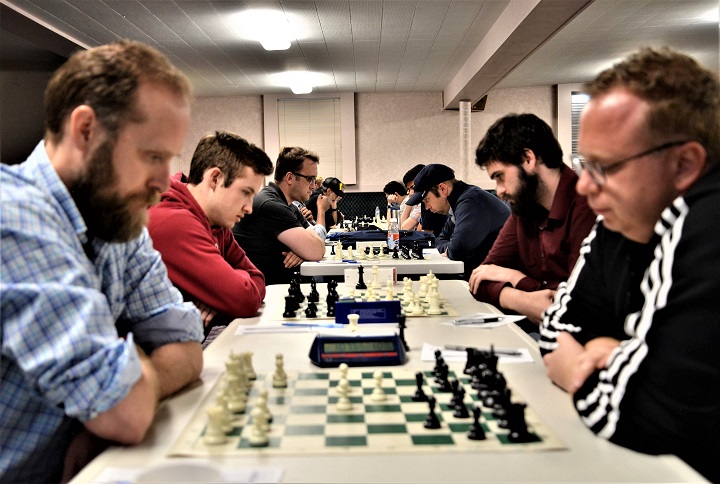 Michel Doyon has White against Richard Shtivelband. Eamon Montgomery with the Black pieces against Ben Gurka.

After ruling the U1900 section for month after month, Ben Gurka is now making his mark in the top section. Losing only to Mr. Wall in round 1 he went on to finish in clear 2nd place with 3 points and win 63 dollars. His fine score included a wild and crazy last round win against Mr. Montgomery. (diagram #4)

Mr. Wall (diagram #5) ended up tied for 3rd place with Kevin Seidler and Mr. Doyon. they finished with 2.5 points and win 14 dollars each. The 20 dollar Premier Upset prize was won by Cory Klauss for his 268 point rating difference win over Mr. Seidler in round 1. 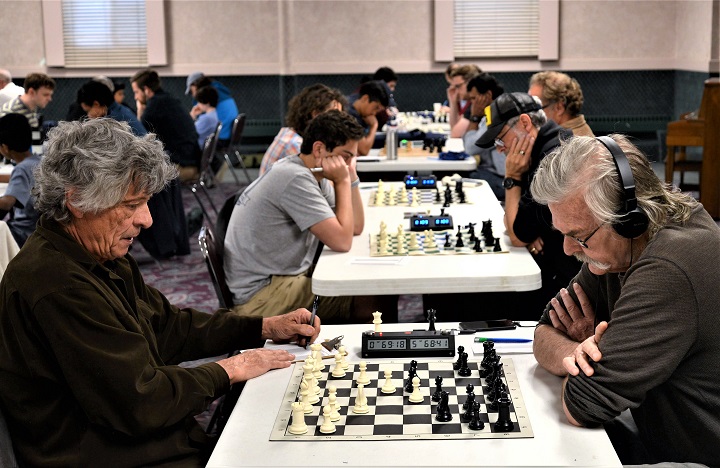 Yours truly with the Black pieces against Ken Doykos.

I am pleased to say I tied with John Brezina for 1st place in the U1900 section. We both scored 3.5 points and share the combined 1st and 2nd place prize of 156 dollars. I'm sure Mr. Brezina won his games by making good moves, but I had to get really lucky against Rob Cernich in round 3. I dropped a whole piece in the opening and was losing when Rob failed to notice I had attacked his Bishop near the end of the game. Adding insult to injury, I took the Bishop with a check and mate next move. No luck in chess? Sure is in my games. (diagrams #7 and #8) 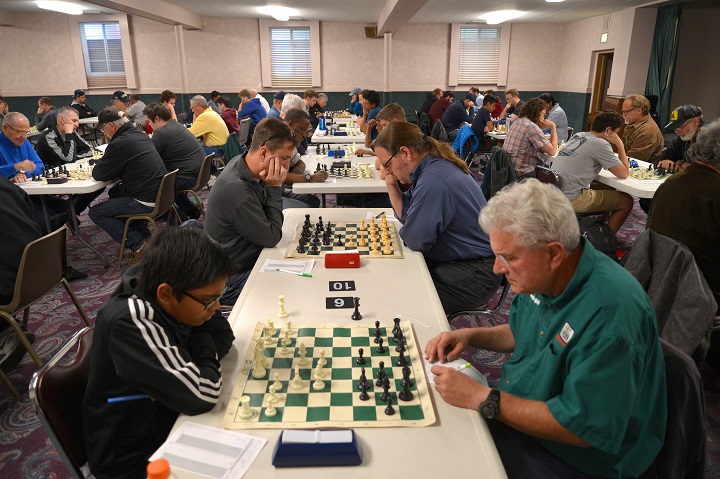 There was a 4-way tie for 3rd place. Ken Doykos, Karthik Selva, Jason McEwen (diagram #12) and Mr. Cernich all ended up with 3 points and they each win 10 dollars. Other than his unfortunate loss against me, (diagram #13) all of Mr. Cernich's points were big upset wins. Including a nice win against the real strong Dwight Sehler in round 1. (diagram #14) The actual 20 dollar U1900 upset prize was won by Archer Murane for his last round 403 point rating difference win against Paul Kullback, who himself had a 347 point win over Walter Lowe in round 3. 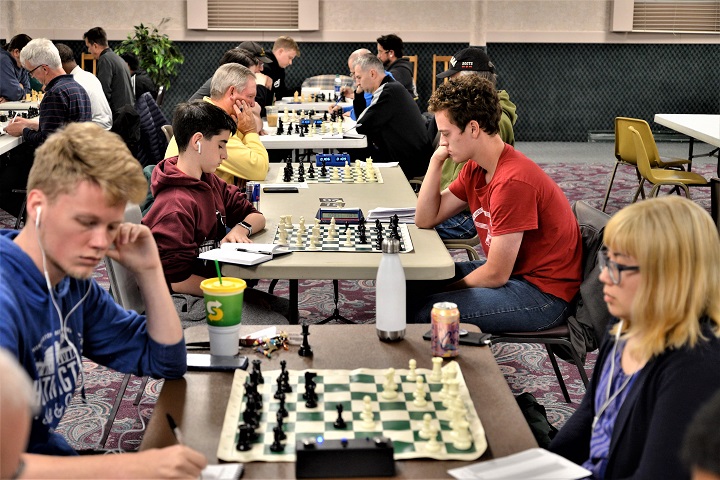 Elijah Warwick writing down his move against Alayne Wilinsky. Daniel Hunter has Black against David Pupko.

Danny Hunter and Elijah Warwick share the combined 1st and 2nd place prize of 156 dollars with 3.5 point scores. They were both held to a draw by Alayne Wilinsky, who wins the 3rd place prize of 40 dollars with 2 wins and 2 draws. Ms. Wilinsky is working hard on her game and it shows. She has a 9 game win or draw streak going. (diagrams #9 and #10) The 20 dollar U1500 Upset prize was won by David Pupko for his 146 rating point difference win in round 3 over Mark Fischer. 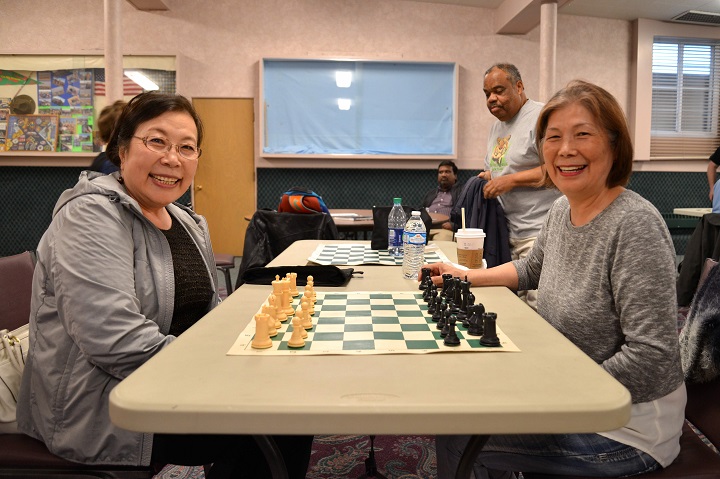 Casual players are always welcome at the Denver Chess Club. 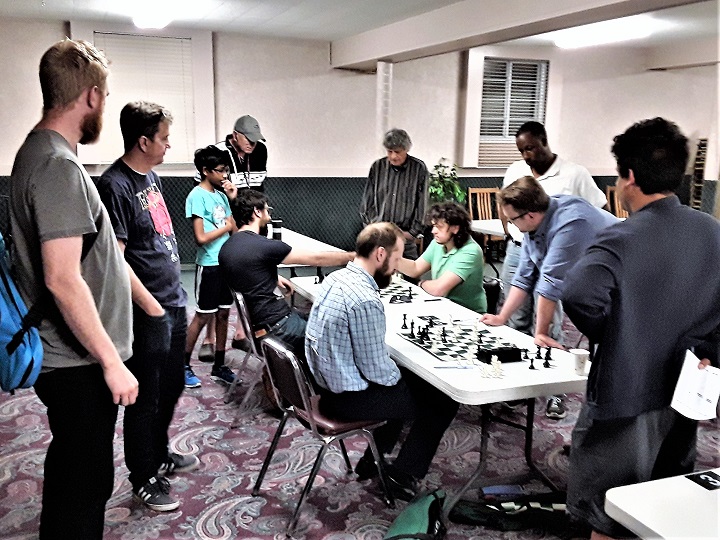 Kibitzers gathering around the last games to finish, and getting ready to kibitz :-)

All the pictures in the DCC playing room were taken by John Brezina. See all of his May 2019 pictures   Thank you kindly, Mr. Brezina.

1) Neil bhavikatti vs. Richard Shtivelband. Round 2. In this position White played 39. Kxg3. Maybe not the best move. What was Mr. Shtivelband's reply? https://denverchess.com/games/view/18596

2) Richard Shtivelband vs. Eamon montgomery. Round 3. Black has just played 18...Nb6-d7. How would you continue as White? https://denverchess.com/games/view/18597

3) Michel Doyon vs. Richard Shtivelband. Round 4. In this position White castled queenside. Do you see how now Black wins a piece? https://denverchess.com/games/view/18598 See also Richard's Round 1 game against Haroun Mueller-Omar

Commenting on this month's games, Mr. Shtivelband said, "Last month I had to really scramble in 4 of my 5 games to prevail and win the Club Championship. This month all my opponents found themselves just shaking their head upon getting up from the board, wondering how things had gone wrong for them so quickly." Richard says he prefers it when his games go smoothly, but the excitement of being in danger of losing is fun too. That must mean all of my games are exciting  :-)

4) Ben Gurka vs. Eamon Montgomery. Round 4. After 13. Kd2, can Black play ...Nd3xb2? From here on out, Mr. Montgomery plays with reckless abandon, but Mr. Gurka is up to the task of protecting his King in the center of the board. https://denverchess.com/games/view/18600

7) Jason McEwen vs. J.C. MacNeil. Round 2. After my usual dubious opening, I had played fairly well to reach this position. Black to move and win a piece. https://denverchess.com/games/view/18578

13) J.C. MacNeil vs. Rob Cernich. Round 3. After dropping a whole piece in the opening, I was first lucky to win an exchange and have a Rook for two pieces. In this position I got even more lucky when Mr. Cernich doesn't notice 31. Rf1-c1 attacked his Bishop. When he played ...Rf7-b7 I took the Bishop and it's mate next move. https://denverchess.com/games/view/18605 If you hear someone say there is no luck in chess, show them this game.

14) Dwight Sehler vs. Rob Cernich. Round 1. White has just played 21. Qd1-d2. What did Dwight overlook? Mr. Cernich refuses to say there was anything special about this game, but a win against a player as strong as Mr. Sehler is always a good game. https://denverchess.com/games/view/18602 See also Rob's game against Bill O'Neil