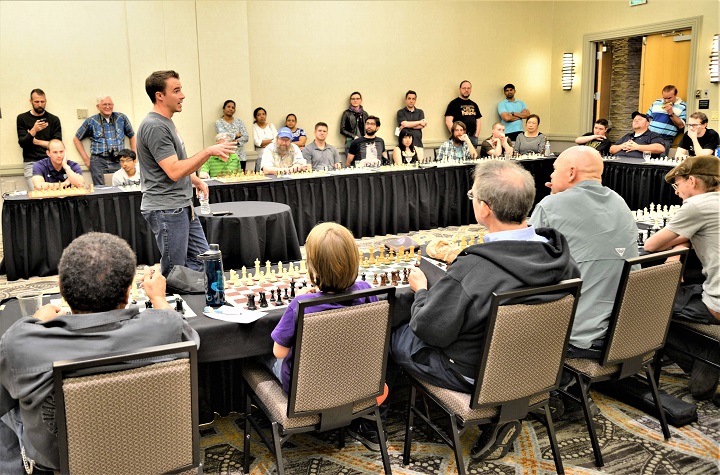 The anticipation before the start of the round is always fun to photograph.

John Brezina has written a great report on his experience at the 2019 Denver Open. My first thought was; Great, I'll get to use more of the terrific pictures he takes at all the chess events he attends. He was designated the official photographer of the tournament by the FIDE tournament director, Tom Nelson. The heading photo is the IM Danny Rensch lecture before his simul. I was once again pleased to select and caption the pictures. Thank you. Mr. Brezina.

Quoting John Brezina: "What do you think of when you hear of Springtime in the Rockies? Snow, skiing, baseball, mountains, flowers? No, chess of course! 160 players were not only thinking of chess but playing in the prestigious Denver Open at the beautiful Embassy Suites hotel. 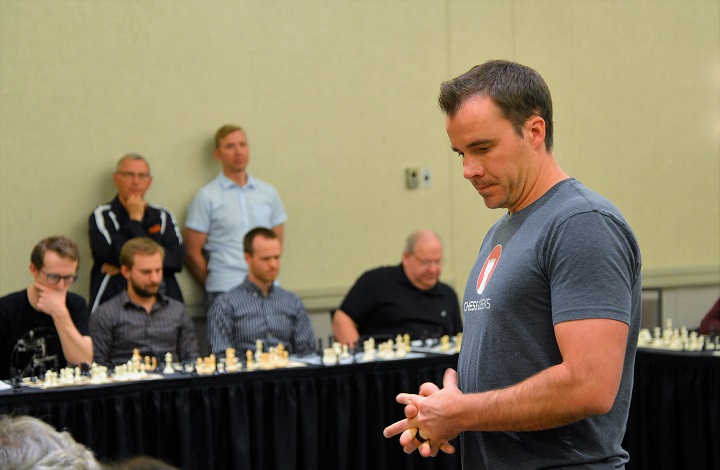 The simul has begun and playing 26 games at the same time is not so easy.

A wonderful 3-day event that included the first all girls State scholastic championships and a 26 board simul and lecture by Chess.com VP and commentator IM Daniel Rensch. In addition, the top three boards in the Championship section were played on DGT boards and streamed live where local NM Chris Peterson provided live commentary on the Chess.com and Twitch channels. 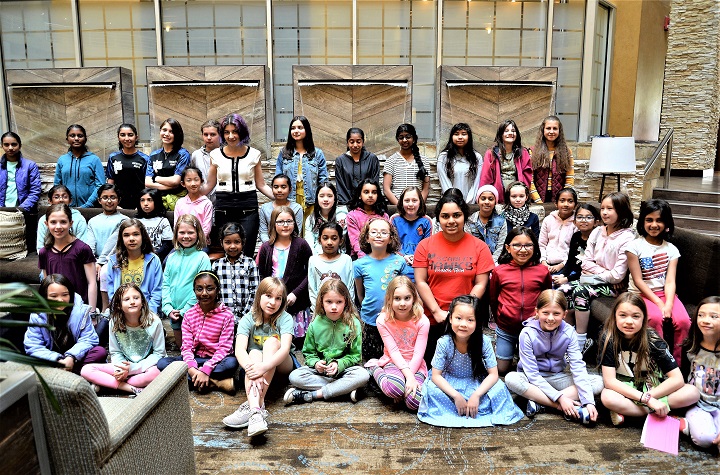 WGM Tatev Abrahamyan, in a white blouse, standing left of center in the third row.

A very well organized tournament that attracted some very strong titled players. A testament to this was that nearly half of the 50 player field in the Championship section were from out of state including six Grandmasters. Special guest WGM Tatev Abrahamyan, who recently placed second in the US Women's Chess Championships, also competed in addition to inspiring many young girls before the start of the scholastic tournament. Another notable guest to compete was FM Sunil Weeramantry, world renowned chess coach and teacher who is the Executive Director of the National Scholastic Chess Foundation. 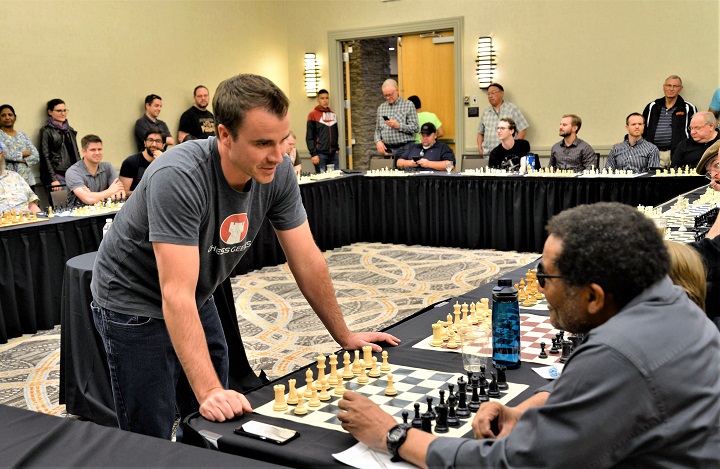 IM Danny Rensch interacting with a player in the simul.

Friday evening would start out with the Daniel Rensch lecture and simul in tandem with round one of the Championship section. A room full of players and fans lined the tables and walls to hear Mr. Rensch speak for nearly an hour covering many different chess topics while taking questions. He engaged the crowd and kept their attention with his vast knowledge of chess and players. Afterwards, IM Rensch would challenge 26 Colorado chess players to a simul. A friendly handshake and introduction would start each game. He kept up a healthy pace around the tables and allowed 3 passes which some players gladly used. After a few hours passed, two wins came from our Denver Chess Club members Dean Clow and Dwight Sehler. 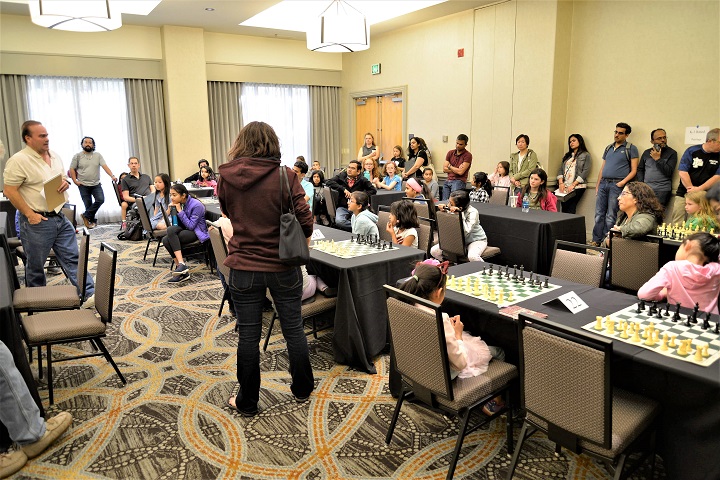 TD Todd Bardwick explaining the rules before the games begin.

In addition to playing in the simul and the U1800 section, I had the privilege of being the official photographer for the Denver Open. First, a few words about the girls State scholastic championships which Vice President of the CSCA Kevin McConnell was instrumental in organizing. He invited me in early Saturday to photograph the group of nearly 50 girls with WGM Abrahamyan before the start of their tournament. Then into the playing room where TD Todd Bardwick explained the rules to the players where they would compete in three sections. The anticipation before the start of the round is always fun to photograph. 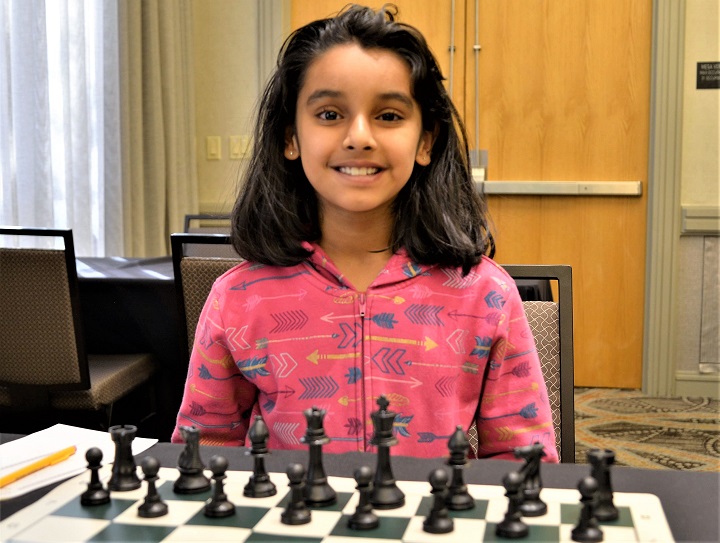 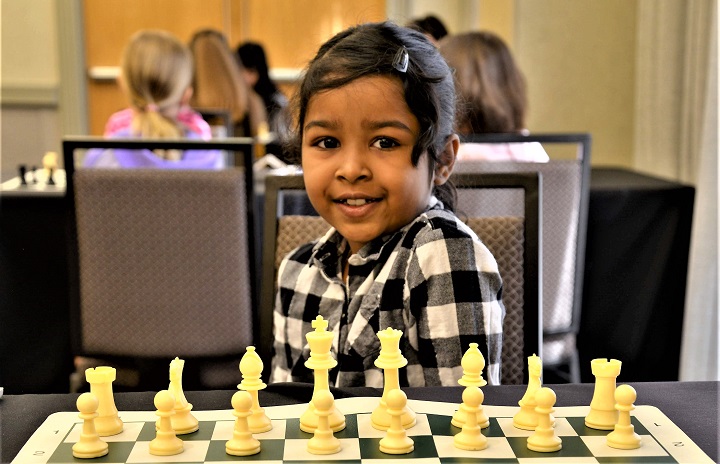 ...and another beautiful smile from this young lady.

I made my way around the room taking pictures of players which seemed to make many of them feel more important and special. Which of course they are! From the funny to the serious poses, I always enjoy capturing the players at the chess board. The K-3 section was won by Tanya Madke with a perfect 5 points. Also with a perfect score of 5 points winning the 4-6 division was Tanishka Tagare. And the upper 7-12 section was won by Olga Sorbala with 4.5 points. With such a successful first tournament of this kind I see it becoming a popular annual event for these young girls. 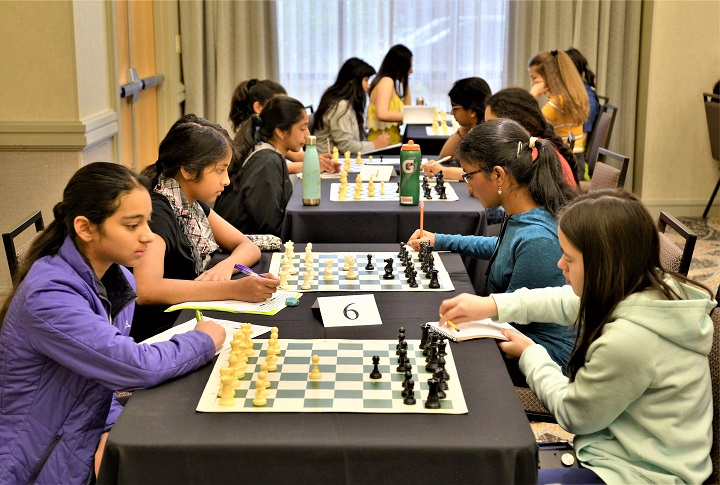 The games have begun and the moves are being recorded for prosperity.

Now onto the main event where the Denver Open was divided into four sections. The Championship section fielded the strongest lineup of players for a Colorado tournament in many years. This would be a FIDE rated event with TD Tom Nelson overseeing the players. He was assisted by CSCA President, Buck Buchanan. Top seed GM Corrales Jimenez would finish with 4 out 5 points just behind tournament winners GM Jesse Kraai and IM Daniel Rensch who each fielded 4.5 points. 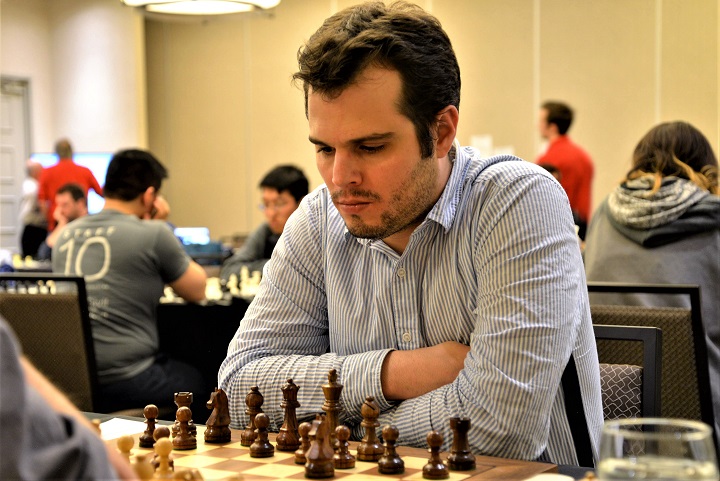 Our top performing Colorado players each with 4 points were Josh Bloomer and the young Sullivan McConnell. "Sully" did not lose a single game in such a strong field and will surely be Colorado's newest Master. Of special note was that our local channel 4 news stopped by for round three. Reporter Melissa Garcia and camera crew interviewed locals, Sara Herman and Sullivan McConnell, as well as filmed the playing hall. She also sat down and talked with WGM Tatev Abrahamyam and IM Daniel Rensch, who spoke of the benefits of chess. See the CBS news broadcast 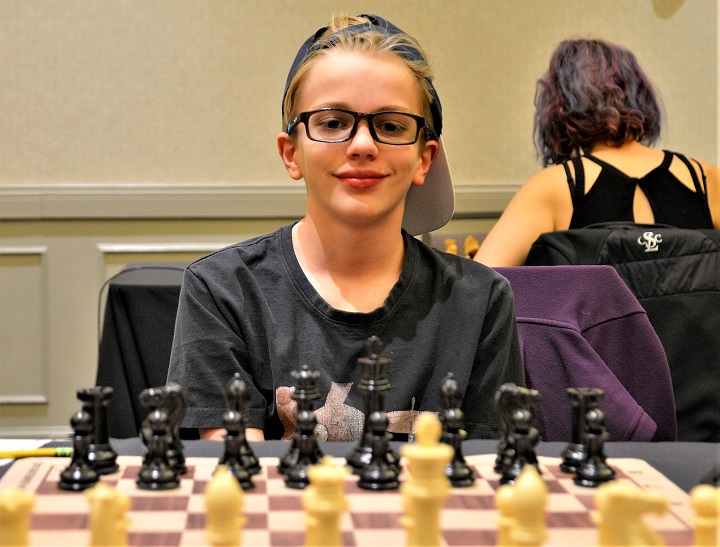 Sullivan McConnell can sure be pleased with his performance in the tournament. 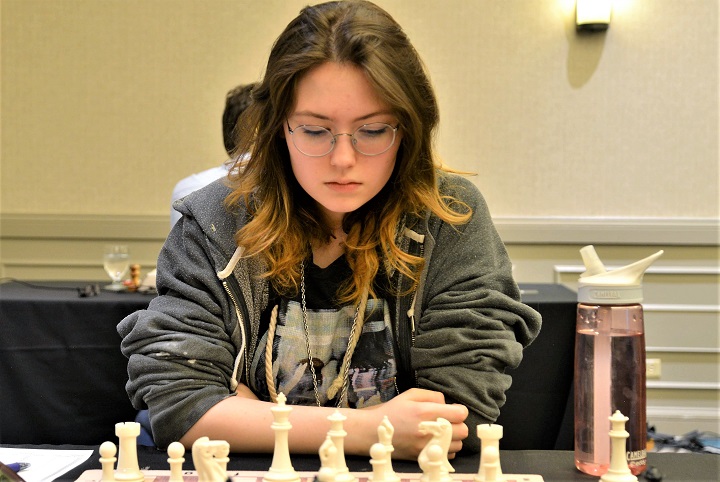 Sara Herman is serious about her chess game.

What a great opportunity to highlight Denver chess and the benefits of the game. It was a pleasure taking photos of so many great players including many of Colorado's best. Between rounds it was always entertaining in the hotel lobby where many would go over their games. Especially our very own Denver Chess Club President Brian Wall, whose age of 64 years has not slowed down his analytical skills nor passion for the game. 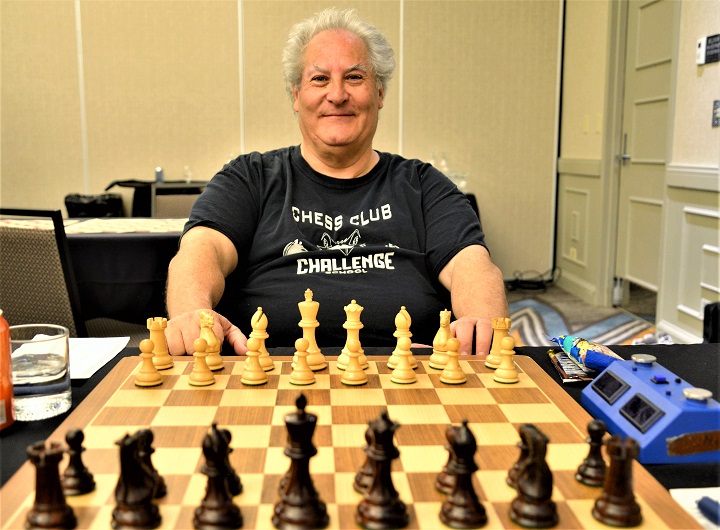 Brian Wall is just so happy this tournament was a great success.

All other sections played together in another room where chief TD Todd Bardwick and assistant TD Dean Clow kept a keen eye on things. Both have been invaluable to Colorado Chess. The U2200 section would field 28 players in which a number were from out of state. Maryland player Nikolas Theiss would clinch clear first with a perfect score of 5 points after defeating our very own Haroun Omar in the last round.

Buck Buchanan observing the games going on in the Under sections.

The largest section with 57 players was the U1800 group which also included 10 out of state players. Stephen Marquez of New Mexico took clear first with an undefeated 5 points. And finally, the U1400 section with 25 players even had one player from out of state. A three-way tie for first with 4 points included Coloradans Danny Hunter and Alayne Wilinsky, and from Michigan Sean Simpson. Great to see our Denver Open attract so many great players from around the country.

I've had the great fortune of attending and covering many great tournaments around the world and to have such a premier tournament in my own backyard is certainly special. It was nice to see a collaboration between the DCC & CSCA put together such a great Denver Open. 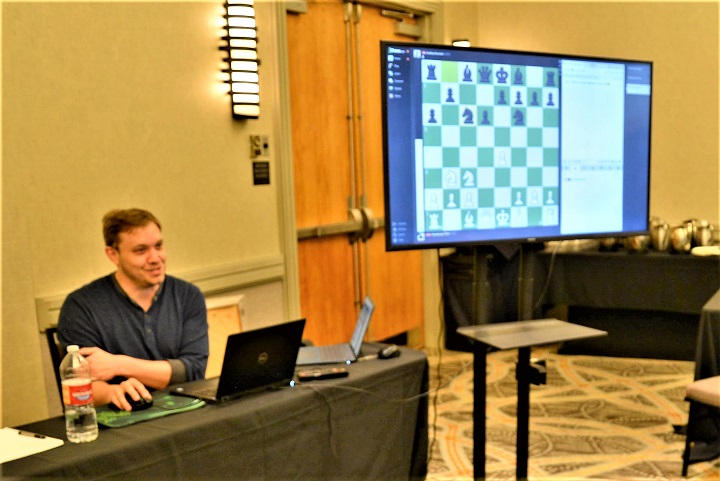 Chris Peterson commentating on the top 3 boards of the Championship section.

Too many folks to thank, many behind the scenes. Dean Clow and his Caissa Chess software is top notch as well as his computer skills. Chris Peterson did a great job with commentary of the top boards and the DGT boards were a great addition. Seeing so many young players in the Denver open assures a bright future for Colorado chess. Until next time, keep playing and promoting our great game..."