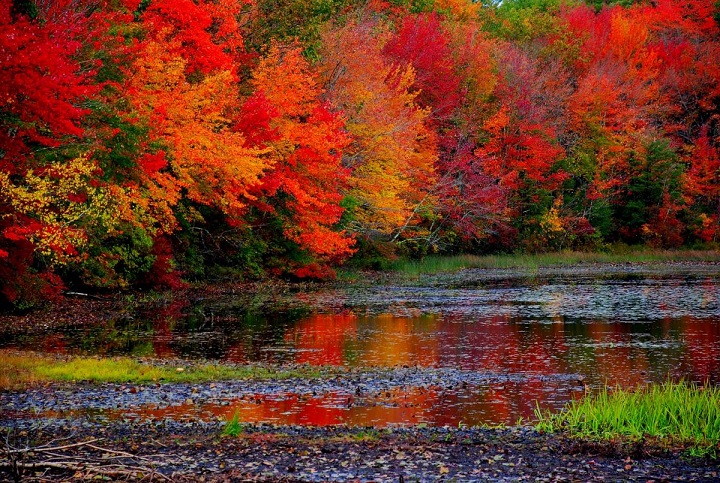 It was weird seeing NM Wall not touching the floor as he was walking around the playing room :-)

The Autumn season is my favorite time of the year. Warm days and cool nights, The tree leaves changing colors and football is back. Of course none of that matters to chess players. We play indoors regardless of the season. 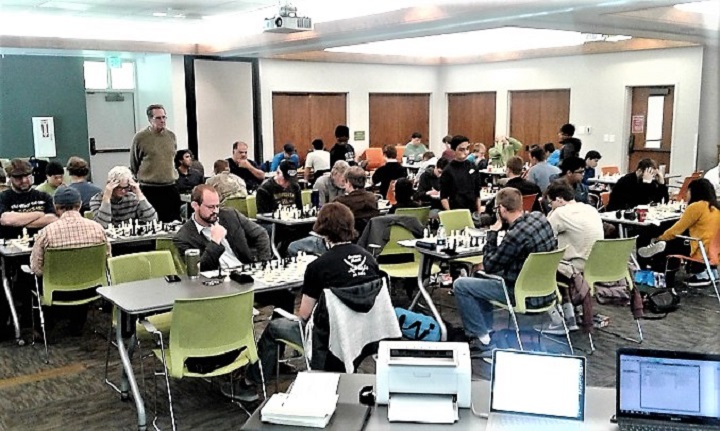 The 2018 Fall Classic up and running

First, I'm pleased to report that we exceeded our attendance goal of 60 players. Only by a couple but nevertheless surpassing our goal. And what a great location the Koelbel Library turned out to be. Opening early and staying late, the library staff did everything they could to accommodate us. In addition there was a snack bar with coffee and other beverages at the library. Just across the the street was a Panera Bread restaurant and a King Soopers for other food. The tournament room was not crowded at all and could have probably held 10-15 more players. In between rounds you could read a book :-) 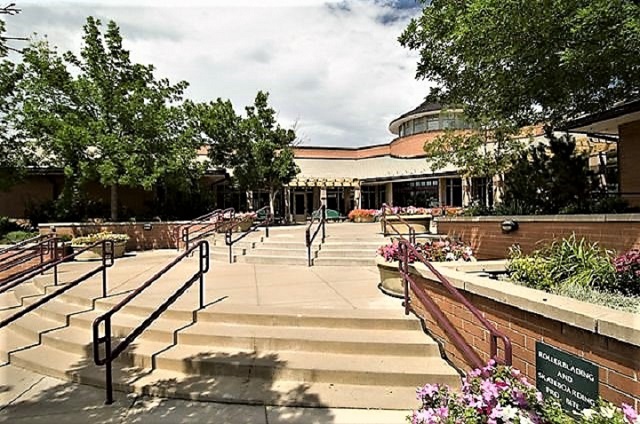 The entrance to the Koelbel library

The best part was, by avoiding the 2 day cost of a hotel, the DCC was able to pay out a real nice 1600 dollar prize fund, pay all expenses, make a substantial donation to the library, and still actually end up in the black. Both the DCC Treasurer, Meint Olthof, and the DCC Vice President, Roger Redmond, a professional financial adviser, were pleased that we, for once, did not lose money to stage a chess tournament. 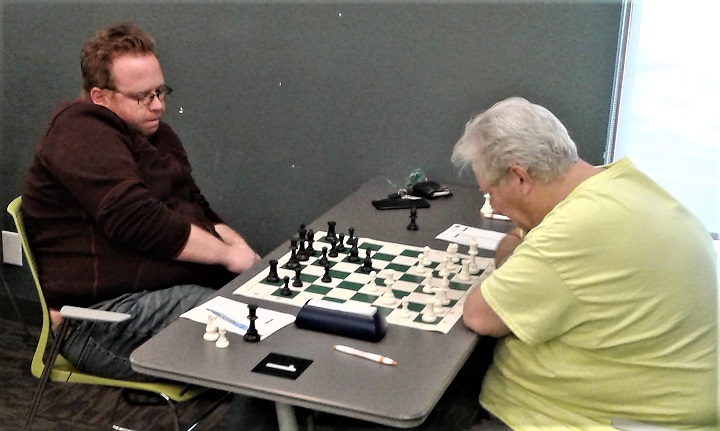 Another person overjoyed with the finances of this tournament was the DCC president, Brian Wall. Not only did he take clear 1st place in the Open section and win 350 dollars, he did it by winning a fantastic round 4 game against his newest nemesis, Richard Shtivelband. It was weird seeing NM Wall not touching the floor as he was walking around the playing room :-)  (See diagrams #1 and #2 below) 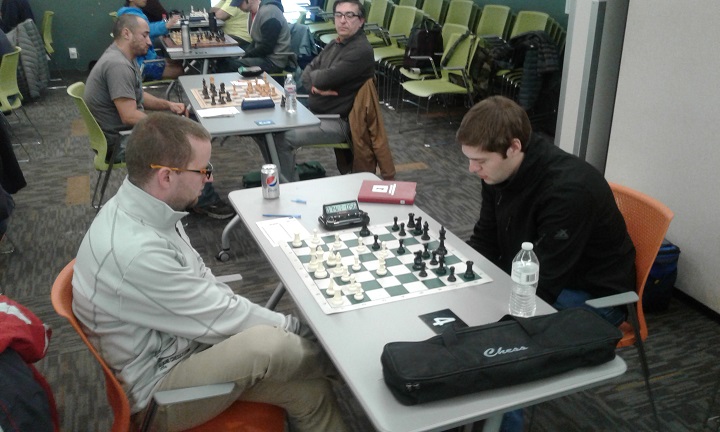 The combined 2nd and 3rd place prize was won by Mr. Shtivelband and Rhett Langseth. They each finished with 4 points and both won 175 dollars. They each only lost to the section winner. Calvin DeJong won the 100 dollar U2000 prize. Calvin is a young player who will likely be rated over 2000 before long. He only lost to Neil Bhavikatti, another youngster whose rating keeps going up. (See #3, #4 and #8) 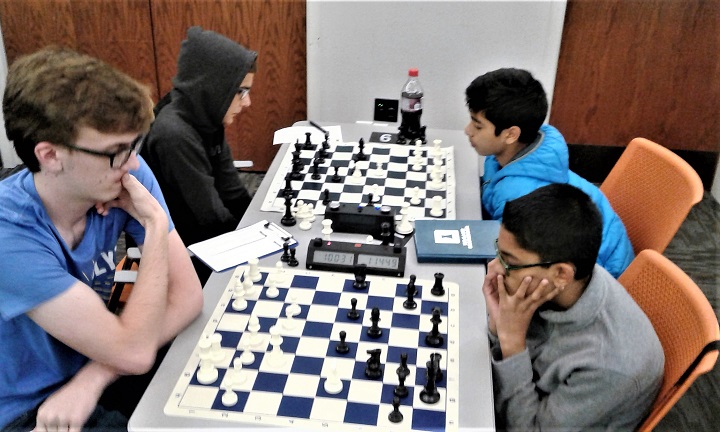 In the background, Calvin DeJong is playing Black against Neil Bhavikatti. Andrew Starr has White against Adiitya Krishna.

If there had been an Upset prize, i'm pretty sure it would have been won by Joe Hubler. He won games against much higher rated players. First, against the long time Colorado player, Brad Lundstrom, in round 3. Then against the new to Colorado chess, Alaa-Addin Moussa, in round 4. Mr. Hubler only lost to Rhett and Brian. (See #5, #6 and #7)

Joe Hubler has the Black pieces against David Hufnagel.

The 400 dollar combined 1st and 2nd place prizes in the U1800 section was shared by Steve Kaufman and Joshua Blanchfield. Mr. Kaufman has been in Colorado for some years but hasn't played that much chess, although he is certainly a strong player. Mr. Blanchfield has recently moved to Colorado and is already playing, and playing well on Tuesday nights at the DCC. Going into the last round they each had 3.5 points and were paired against each other. After a hard fought draw, they claimed the top prizes in this section. (See #10) 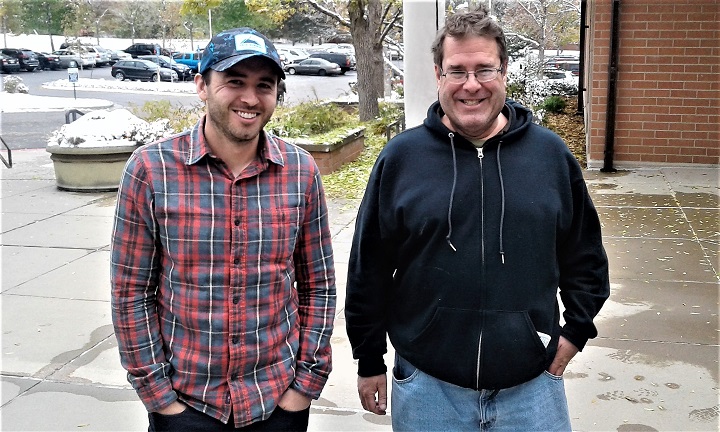 Joshua Blanchfield, on the left, and Steve Kaufman. Looking quite pleased to have to have ruled the U1800 section.

The 3rd place prize was shared by Robert Carlson, Daniel Cole, Harsh Vishal Mali, and your reporter. We each won 25 dollars with 3.5 point final scores. I was certainly lucky to not lose the two games I drew. Dean Brown, in time pressure, elected to offer me a draw in what was probably a winning position. I was only too happy to accept the offer. Mr. Carlson was also better for most of our game. In the end, it was only a draw because I had opposition to pin his King to the Rook file. Else he Queens a pawn and I don't. (See #11 and #12) 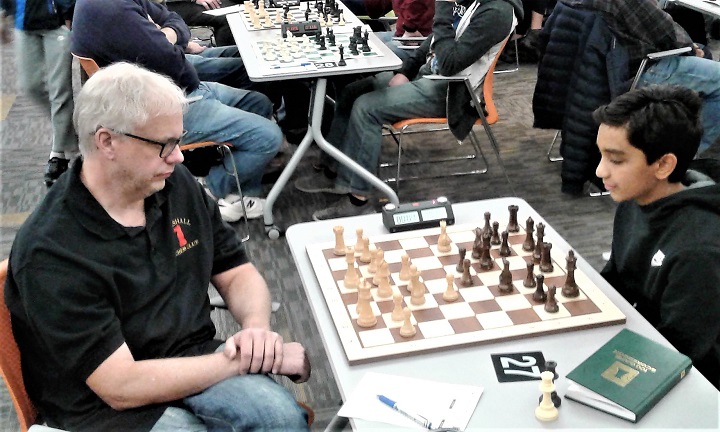 Brian Ledsworth has the White pieces against Pranav Maddli in the last round.

DCC regular, Brian Ledsworth, won 200 dollars with a 4.5 point performance in the U1400 section. Mr. Ledsworth had the benefit of a round 4 forfeit win, but a point is a point, and he will gain 85 USCF rating points. Before round 5, Brian was showing me a diagram of the branches of a line in the Sicilian that he was studying. Made my head spin. Here's my knowledge of the Sicilian defense: White plays 1. e4. Black replies 1... c5. :-) (See#13)

In the foreground, Brian Norris-Saucedo is playing White against Andrew Eskenazi.

Brian Norris-Saucedo plays often at the DCC on Tuesday night and his game is also improving. He lost to Mr. Ledswoth in round 2, but won all his other games to win the 100 dollar 2nd place prize. Mr. Norris-Saucedo will gain 67 rating points.The money is nice, but it's the rating that tells us the truth. (See #14) 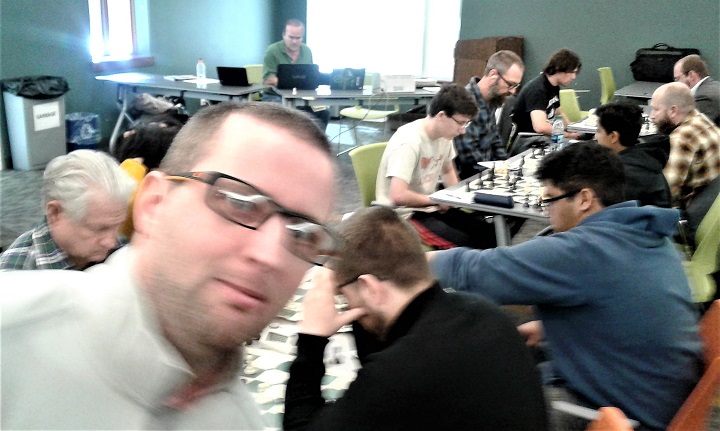 Dean Clow. computer genius. The ghost in the machine :-)

Congratulations to all the prize winners, and thanks to all who registered to play and made this a challenging, competitive tournament. Thanks to Todd Bardwick for efficiently running the tournament, using Dean Clow's CassiaChess software.

Here are a few diagrams and game links form this tournament:

We'll start with the game that empowered Brian Wall to walk on air :-)

2) The same game after 25... Rd8-d2. And what did the Grand Poobah of Colorado chess play here to win the game?

3) Richard Shtivelband vs. Alaa-Addin Moussa. Round 3. Final Position after 35. Kg1-g2. Black resigns. The f7 square must be defended and it will cost Black an exchange. https://denverchess.com/games/view/17900 A well played game by Colorado's newest 2300 rated National Master.

4) Richard Shtivelband vs. Andrew Starr. Round 1. After 22... Ra8-b8, It looks as if Black may have some attack on White's Queen side. How does NM Shtivelband put an end to that dream? https://denverchess.com/games/view/17897

5) Brad Lundstrom vs. Alaa-Addin Moussa. Round 2. The Black passed pawn on b3 seems to be stopped. Can you see the excellent move Mr. Moussa plays to force its promotion or win White's Bishop? https://denverchess.com/games/view/17898

7) Alaa-Addin Moussa vs. Joe Hubler. Round 4. White has just captured a Bishop with 39. Rd6xc6, and it appears Black is busted. Find Mr. Hubler's calm, cool and collected move. https://denverchess.com/games/view/17883 Collected, as in collected the full point.

8) Calvin DeJong vs. Christopher Motley. Round 1. The young Calvin DeJong finishes the game quickly from this position. Black last move was 17... b7-b6. How would you continue? https://denverchess.com/games/view/17899 See a irresistible force -Calvin- against an immovable object -Davin Yin- game. https://denverchess.com/games/view/17884 Force wins out in the end but Davin did not go down easy. Both of these young players will be a force in Colorado chess for years to come.

9) Sullivan McConnell vs. DuWayne Langseth. Round 5. Sullivan, along with his brother Griffin, are other young players who can and do compete with strong experienced adults. After 60. Kf3-g4, "the only good move", Mr. Langseth played 60... Kf8. Sullivan calls this move "a blunder in a lost position." How does he continue? https://denverchess.com/games/view/17876

10) Joshua Blanchfield vs. Dean Brown. Round 2. White had played a nice King side attack to reach this position. What does he play now to win the game? https://denverchess.com/games/view/17887 Welcome to Colorado Mr. Blanchfield.

11) J.C. MacNeil vs. Michael Igoe. Round 5. For once I had good Bishops. The light Bishop on c4 had enabled threats, and now in this position the dark Bishop on h6 wins the game. https://denverchess.com/games/view/17877

12) Nolan Ottele vs. Robert Carlson. Round 1. Mr. Carlson plays this pawn ending with efficiency. White has just played 32. a2-a4. How does Black go about converting his advantage. https://denverchess.com/games/view/17893

14) Richard Ray vs, Brian Norris-Saucedo. Round 5. In this position White played 16. N3e2, and one of the beautifully placed Black Knights leaps to where? https://denverchess.com/games/view/17885